Scientists in South Korea have made a breakthrough in battery research that could help us bust through a key bottleneck in energy storage. The team’s advance overcomes a technical issue that has held back highly promising lithium-metal battery architecture and could pave the way for batteries with as much as 10 times the capacity of today’s devices. END_OF_DOCUMENT_TOKEN_TO_BE_REPLACED

This is just tragic!

Dog meat on the menu for Olympic tourists: Restaurants ignore official orders to stop serving the food in region where Winter Games are held

Almost all the dog meat restaurants in Pyeongchang, where the Winter Olympics opening ceremony will be held on Friday, have disregarded a government request to stop serving the food.

South Koreans are believed to consume about one million dogs a year as a summertime delicacy. The greasy red meat is boiled for tenderness and is believed to increase energy and health.

Activists have launched several campaigns to ban dog consumption, with online petitions urging boycotts of the 2018 Pyeongchang Winter Olympics over the issue, and protests in Seoul. END_OF_DOCUMENT_TOKEN_TO_BE_REPLACED

Below are 2 videos of North Korean State-Run Tv. They are, as we have heard for years, quite threatening. It sounds like the same old bluster they used back in the 1990’s to fool the idiots (not hard to do) like former president Jimmy Carter and Madeline Not-All-that-Bright into them giving oil, and other supplies as well as assistance in building reactors. In return North Korea promised to freeze it’s nuclear weapons program. They promised, so we should’ve believed them. I think they did a pinky swear with Carter. About that same time the North Korean leader, Kim Il Sung died and his son, Kim Jong Il became supreme leader. Just as it is now, Kim Jong Il was new and untested and had to make his presence known and flex his leadership muscles. Many in this country and worldwide thought that with the passing of his father, the son Kim Jong Un would be more reasonable and receptive to peace and compromise. Of course, as it is with all tin-pot depots, it is turning out, at least so far, to be the exact opposite. What a shocker! Who would’ve seen that coming?

Despite the rhetoric of the interviewed citizen, one can hardly blame the people of North Korea. They no nothing of the world outside their own country. They have been thoroughly brainwashed for decades.

The problem is, as I see it, with each successive hand-down of power from one Kim to the next, North Korea becomes a little more unstable and the leader becomes lunier. This kid, Kim Jong Un, is most likely certifiable. He is a spoiled child of a ruthless dictator that has never heard the word “No”. He’s probably never lost at anything, due to the fear of death for anyone stupid enough to tell he has lost. Not to mention, he was kept under wraps for most of his life. No one outside North Korea even knew he existed until about a decade ago.

I’m not convinced this guy is just all show and no go. He may be crazy enough to do something. Who is going to tell him he can’t launch a nuke?

Now he is tearing up and invalidating the 1953 Armistice between North and South Korea. That’s nothing new; it’s been done before, just to be reinstated.

But I fear this guy may be different. He may actually roll into South Korea. Then what? What will we do? What will China do, or Russia? Will we be willing to sacrifice 58,000 American troops to protect our ally, South Korea. Think of all the Hyundais and Samsung products that could be lost.

Seriously, what would we do? I frankly don’t have a clue, especially with our current leader who specializes in leading from behind.

On October 9th, North Korea warned that mainland America is now within range of its missiles as it accused the U.S. of conspiring with South Korea.

It comes after Seoul, South Korea, announced that it has reached a deal with Washington allowing it to nearly triple the range of its missiles to better cope with North Korean nuclear threats.

North Korea claims the move proves that the allies are plotting to invade the country, calling the deal a ‘product of another conspiracy of the master and the  stooge’ to ‘ignite a war’ against the North. 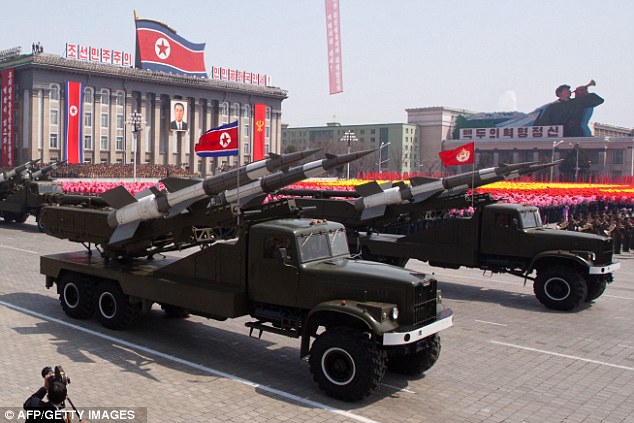 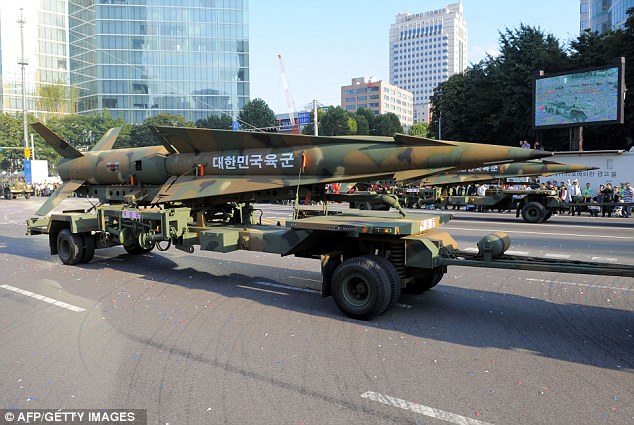 A parade marking the country’s Armed Forces Day  in Seoul

In a statement carried by the official Korean Central News Agency, a spokesman at the powerful National Defense Commission said the North would bolster its military preparedness.

He said: ‘We do not hide… the strategic rocket forces are keeping within the scope of strike not only the bases of the puppet forces and the US imperialist aggression forces’ bases in the inviolable land of Korea but also Japan, Guam and the US mainland.’

South Korea’s Defense Ministry said it has no official comment on the North’s statement but Seoul and Washington have repeatedly said they have no intention of attacking North Korea.

North Korean long-range rockets are believed  to have a range of up to about 4,160 miles (6,700km), putting parts of Alaska within reach, according to South Korea’s Defense Ministry.

But the North’s patchy record in test launches raises doubts about whether it is truly capable of an attack. 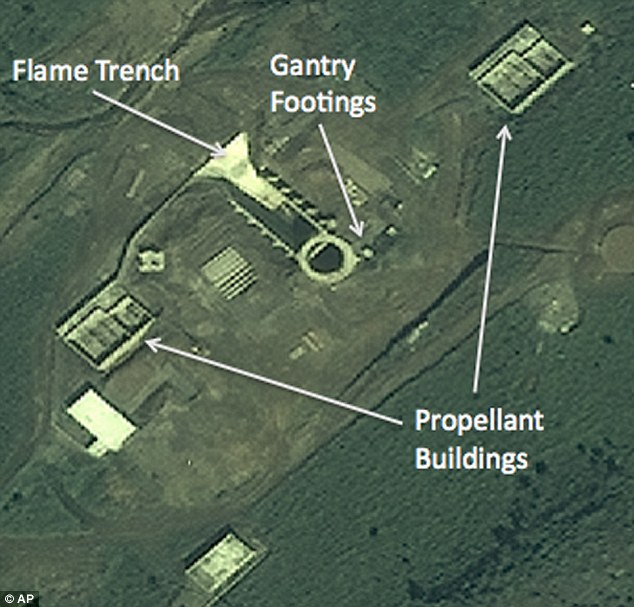 Structures represent gantry footings, a flame trench and propellant buildings for a new launch pad near the village of  Musudan-ri on the northeast coast of North Korea 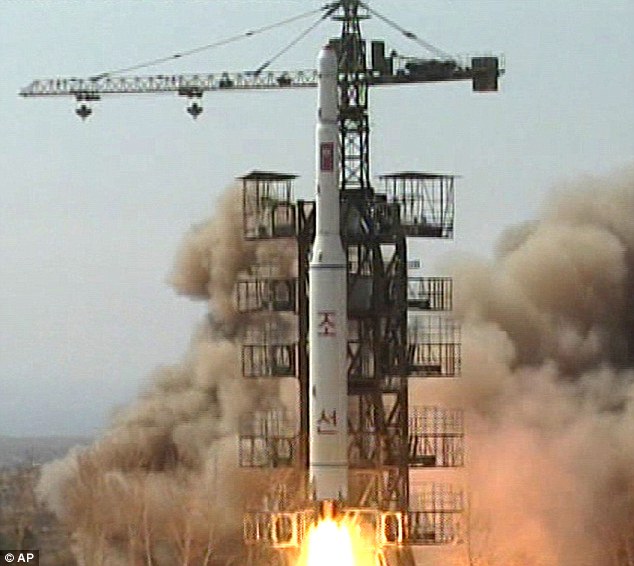 A rocket lifts off from Musudan-ri,  North Korea, in 2009

Pyongyang shocked Japan in 1998 when it sent a rocket over Japan’s main island and into the Pacific. That also alarmed Washington because about 50,000 US troops are deployed in Japan and their bases could be within the North’s range. Tokyo and Washington  have since intensified their ballistic missile defenses.

But the North’s most recent rocket launch, in April, ended in humiliating failure shortly after lift-off.

North Korea said it was trying to launch a satellite, but the US and other countries said it was actually a test of long-range missile technology.

The failure suggests that Pyongyang has yet to master the technology it needs to control multi-stage rockets, a key capability if it is to threaten the United States with intercontinental ballistic missiles.

And although North Korea is believed to have a small nuclear arsenal, experts do not believe it has mastered the miniaturization technology required to mount a nuclear weapon on a long-range rocket.

It is unusual for the North to say its missiles are capable of striking the US, but North Korea has regularly issued harsh rhetoric against Seoul and Washington. 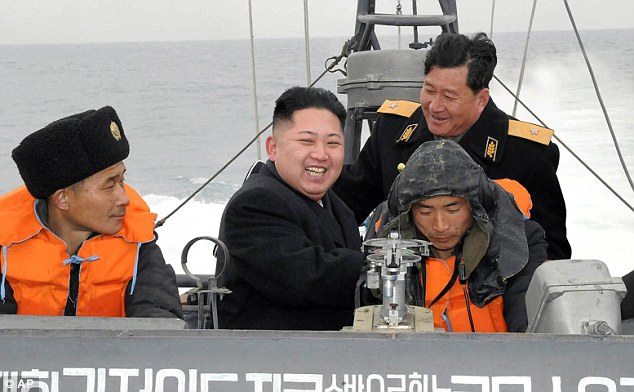 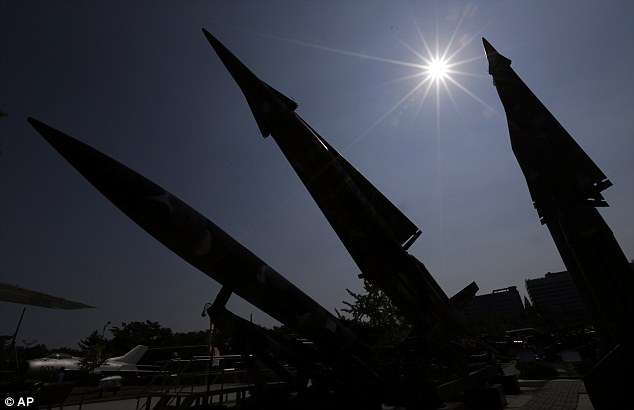 Koh Yu-hwan, a North Korean studies professor based in Seoul, said the North had no choice but to respond to South Korea’s extended missile range but it is unlikely to launch a provocation, as it is waiting for the results of US and South Korean presidential  elections.

A previous 2001 accord with Washington had barred South Korea from deploying ballistic missiles with a range of more than 186 miles (300m) and a payload of more than 1,100lb (500kg) because of concerns about a regional arms race.

The Korean Peninsula remains officially at war because the 1950-53 Korean War ended with an armistice, not a peace treaty.  The US stations about 28,500 troops in South Korea as deterrence against possible aggression from North Korea.