Rupert Murdoch, CEO of News Corp., parent company of hated Fox News thinks that one billionaire in the presidential race isn’t good enough. He tweeted out his desire for another to enter. And the other billionaire is none other than Michael “Nanny State” Bloomberg.

Is this the beginning of a draft Bloomberg campaign? I doubt it, but only time will tell, and it’s hard to say whether Murdoch was serious or not as he tweeted: “With Trump becoming very serious candidate, it’s time for next billionaire candidate, Mike Bloomberg to step into ring. Greatest mayor.”

Now right off the bat, you would have to question the sanity of Murdoch by saying Bloomberg was the “Greatest mayor.” I understand Murdoch and Bloomberg are good friends but calling him the greatest mayor, and thinking he wouldn’t be as progressive with the nation as he was with New York City, are a little far-fetched.

Murdoch failed to elaborate in any of his tweets for which party Bloomberg would run, although it seems to me he would be better suited to displace Hillary Clinton than any Republican, save for a few progressive establishment types.

Murdoch went back to Twitter to explain that although he was at odds with a lot of the “nanny state” policies Bloomberg enacted as mayor, he reiterated that along with Rudy Giuliani, Bloomberg made New York City the greatest. END_OF_DOCUMENT_TOKEN_TO_BE_REPLACED

from: Madeleine Morgenstern at The Blaze

News Corp. CEO Rupert Murdoch went on a bit of a Twitter tear Saturday morning, predicting a “nightmare for Israel if Obama wins” re-election and accusing the White House of “still lying about Benghazi.”

The media mogul — whose company owns Fox News, the Wall Street Journal, the New York Post and others — said Vice President Joe Biden “threw [the] CIA under the bus“ and ”now [White House] throws State [Department]!” He also came down on Mitt Romney, saying the Republican presidential nominee needs to ignore personal attacks at the next debate and focus on his jobs plan:

Murdoch has been fairly free with his Twitter advice for Romney in the past: Last month he said he needed to “stop fearing [the] far right” and take more of a big tent approach to win the election. During the summer, he wondered, “when is Romney going to look like a challenger?” He subsequently defended himself from an apparent barrage of negative tweets from Romney supporters, saying, “of course I want him to win, save us from socialism, etc.”

As Mediaite noted, when a Murdoch-type figure in the media espouses such clear-cut political beliefs so publicly, “the question arises as to whether these opinions will eventually trickle down through their outlets.”

Rupert Murdoch joined the Twittersphere to start off the new year, and one of his first tweets was a shout-out to Republican presidential candidate Rick Santorum.

“Good to see santorum surging in Iowa. Regardless of policies, all debates showed principles, consistency and humility like no other,” the international media mogul tweeted from @rupertmurdoch, the Twitter account he opened on the last day of 2011. 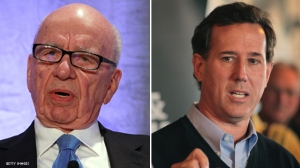 Murdoch, who already has almost 40,000 Twitter followers, according to the U.K.’s Daily Mail, sent tweets not only about politics but also movies, how he spent his holidays, and, in a few instances, to plug his companies.