An Iraq veteran who lost all four limbs in a roadside bombing in Iraq almost four-years ago said today he’s looking forward to driving and swimming after undergoing a double-arm transplant.

‘I just want to get the most out of these arms, and just as goals come up, knock them down and take it absolutely as far as I can,’ Brendan Marrocco said Tuesday.

The 26-year-old New Yorker spoke at a news  conference at Johns Hopkins Hospital, where he was joined by surgeons who  performed the arduous and complex 13-hour operation. 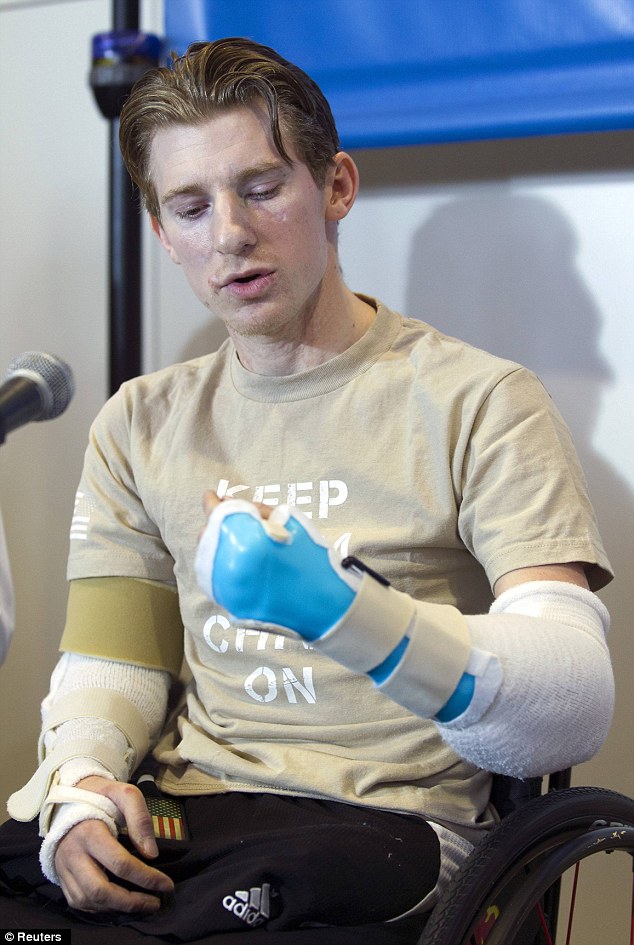 After he was wounded, Marrocco said, he felt  fine using prosthetic legs, but he hated not having arms.

Marrocco said his chief desire is to drive  the black Dodge Charger that’s been sitting in his garage for three  years.

‘I used to love to drive,’ he said. ‘I’m  really looking forward to just getting back to that, and just becoming an  athlete again.’ 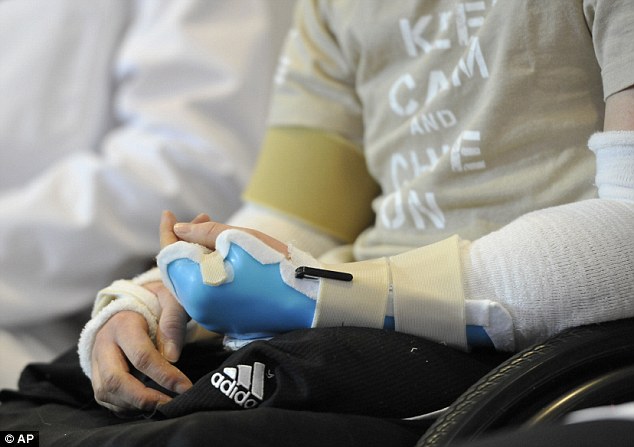 Retired Infantryman Brendan M. Marrocco sits with his  two transplanted arms resting in his lap during the news conference

Although he doesn’t expect to excel at  soccer, his favorite sport, Marrocco said he’d like to swim and compete in a  marathon using a hand-cycle.

His good humor and optimism are among the  qualities doctors cited as signs he will recover much of his arm and hand use in  two to three years.

‘He’s a young man with a tremendous amount of  hope, and he’s stubborn – stubborn in a good way,’ said Dr. Jaimie Shores, the  hospital’s clinical director of hand transplantation. ‘I think the sky’s the  limit.’

Shores said Marrocco has already been trying  to use his hands, although he lacks feeling in the fingers, and he’s eager to do  more as the slow-growing nerves and muscles mend.

‘I suspect that he will be using his hands  for just about everything as we let him start trying to do more and more. Right  now, we’re the ones really kind of holding him back at this point,’ Shores  said.

The procedure was only the seventh  double-hand or double-arm transplant ever done in the United States.

The infantryman was injured by a roadside  bomb in 2009. He is the first soldier to survive losing all four limbs in the  Iraq War. 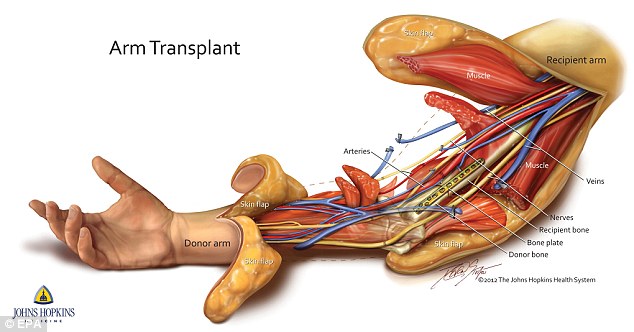 This graphic shows an illustration of one of Brendan  Marrocco’s arm transplants. A surgical team led by Johns Hopkins physicians  performed the institution’s first bilateral arm transplant on 18 December  2012 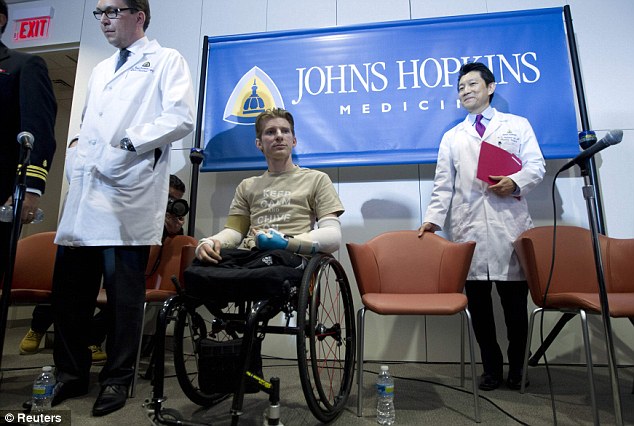 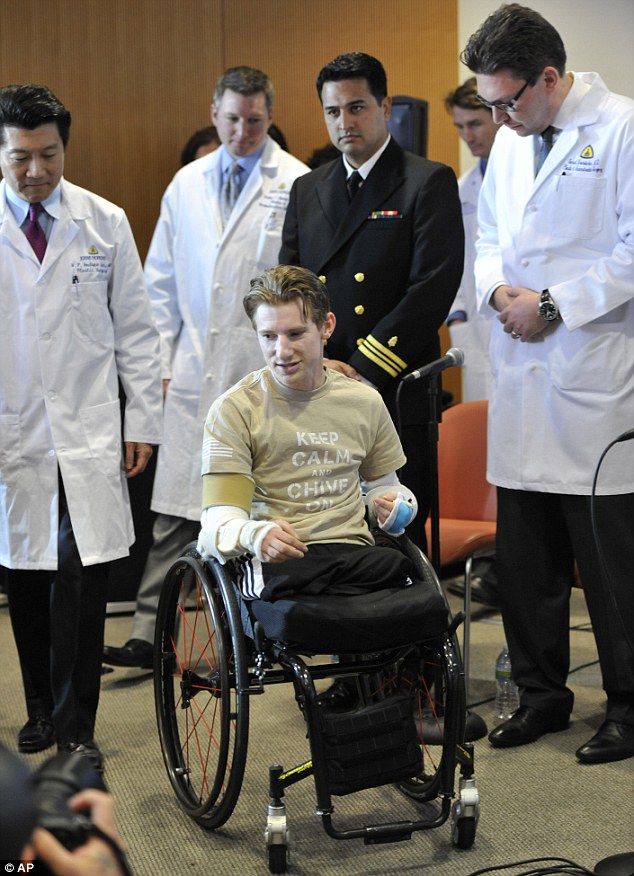 He said he didn’t know much about the donor  but ‘I’m humbled by their gift.’

Marrocco was being released from the hospital  Tuesday but will receive intensive therapy for two years at Hopkins and then at  Walter Reed National Military Medical Center in Bethesda.

After a major surgery, human nerves  regenerate at a rate of an inch per month, Lee said.

‘The progress will be slow, but the outcome  will be rewarding,’ he added.

The infantryman also received bone marrow  from the same dead donor who supplied his new arms. That novel approach is aimed  at helping his body accept the new limbs with minimal medication to prevent  rejection.

The military sponsors operations like these  to help wounded troops. About 300 have lost arms or hands in Iraq or  Afghanistan. 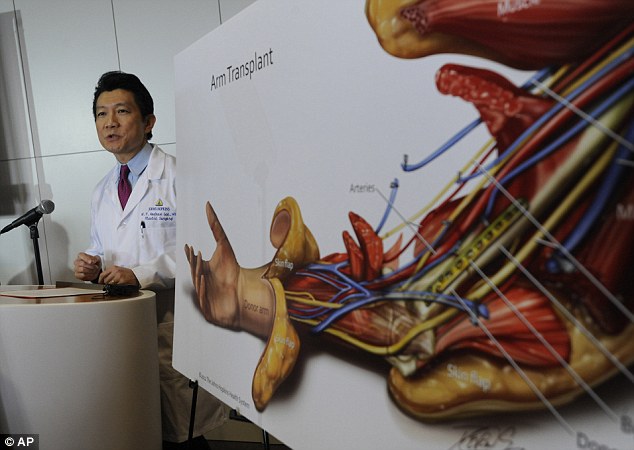 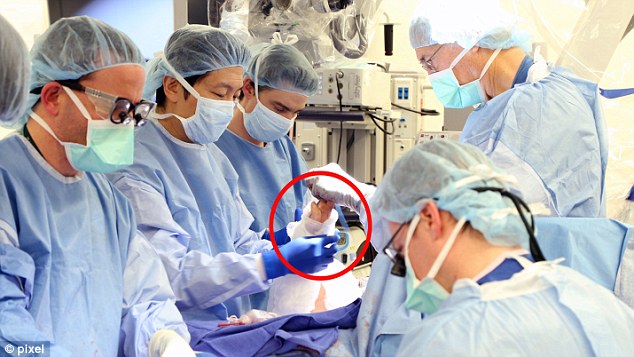 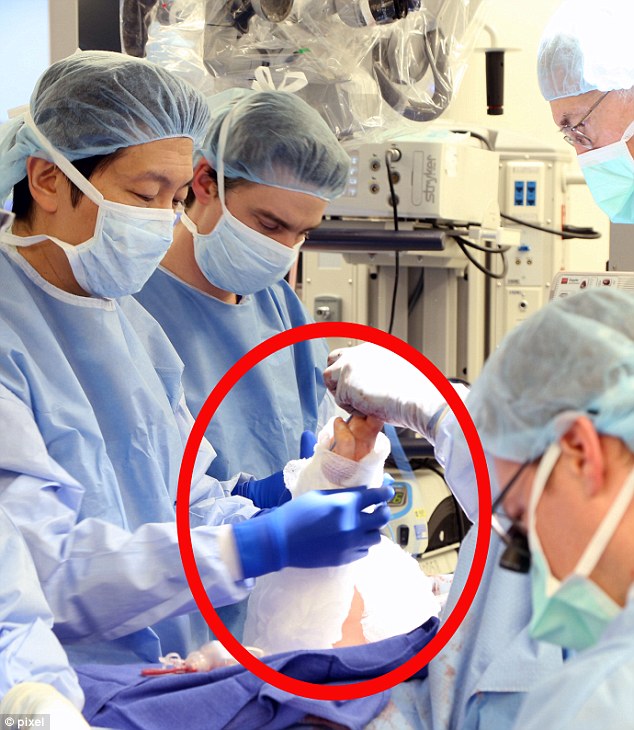 The surgical team led by Johns Hopkins  physicians performed the institutions first bilateral arm transplant, together  with an innovative treatment to prevent rejection of the new limbs

Unlike a life-saving heart or liver  transplant, limb transplants are aimed at improving quality of life, not  extending it. Quality of life is a key concern for people missing arms and hands — prosthetics for those limbs are not as advanced as those for feet and  legs.

‘He was the first quad amputee to survive,’  and there have been four others since then, Alex Marrocco said.

The Marroccos want to thank the donor’s  family for ‘making a selfless decision … making a difference in Brendan’s  life,’ the father said.

Brendan Marrocco has been in public many  times. During a July 4 visit last year to the Sept. 11 Memorial with other  disabled soldiers, he said he had no regrets about his military  service.

Lee led three of those earlier operations  when he worked at the University of Pittsburgh, including the only above-elbow  transplant that had been done at the time, in 2010.

Marrocco’s ‘was the most complicated one’ so  far, Lee said in an interview Monday. It will take more than a year to know how  fully Marrocco will be able to use the new arms.

‘The maximum speed is an inch a month for  nerve regeneration,’ he explained. ‘We’re easily looking at a couple years’  until the full extent of recovery is known.

While at Pittsburgh, Lee pioneered the  immune-suppression approach used for Marrocco. The surgeon led hand-transplant  operations on five patients, giving them marrow from their donors in addition to  the new limbs. 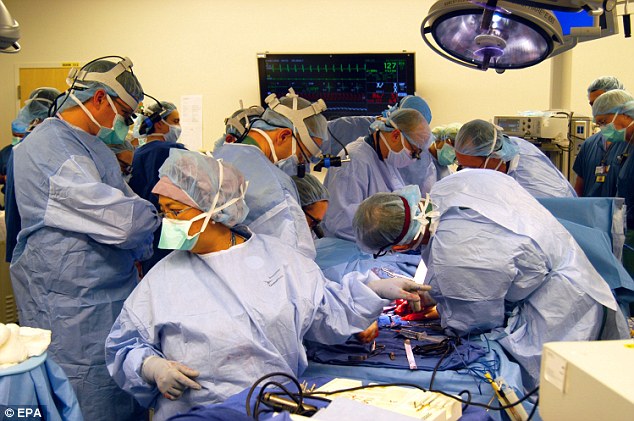 All five recipients have done well, and four  have been able to take just one anti-rejection drug instead of combination  treatments most transplant patients receive.

Minimizing anti-rejection drugs is important  because they have side effects and raise the risk of cancer over the long term.  Those risks have limited the willingness of surgeons and patients to do more  hand, arm and even face transplants.

Lee has received funding for his work from  AFIRM, the Armed Forces Institute of Regenerative Medicine, a cooperative  research network of top hospitals and universities around the country that the  government formed about five years ago.

With government money, he and several other  plastic surgeons around the country are preparing to do more face transplants,  possibly using the new immune-suppression approach. 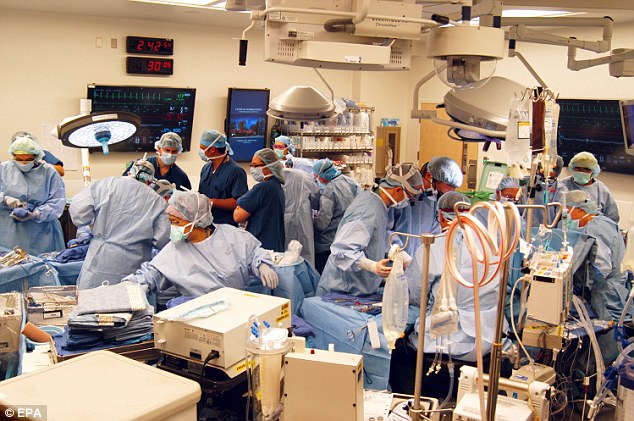 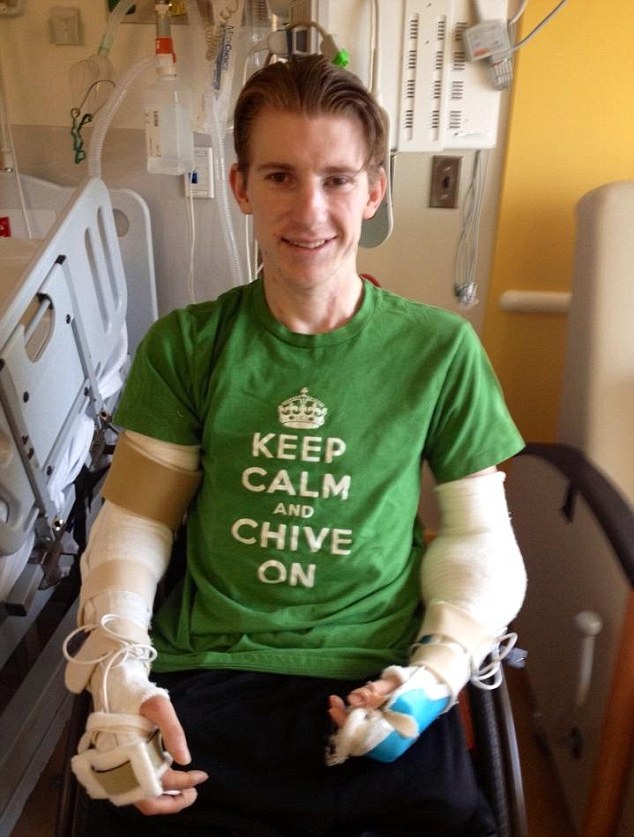 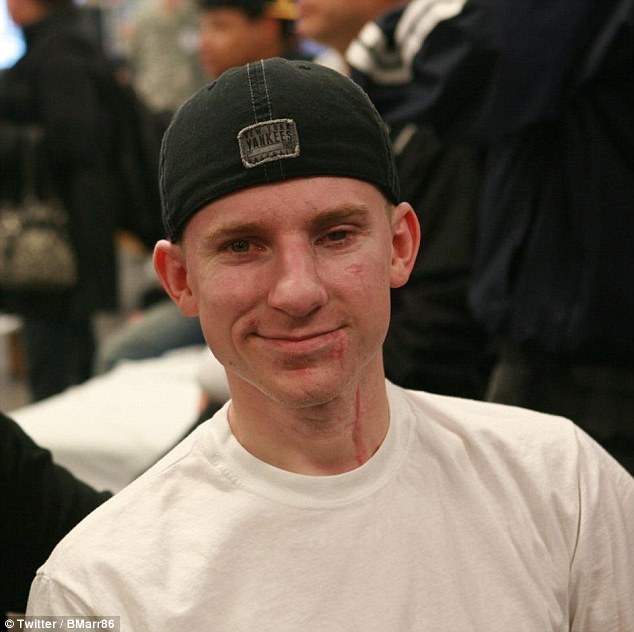 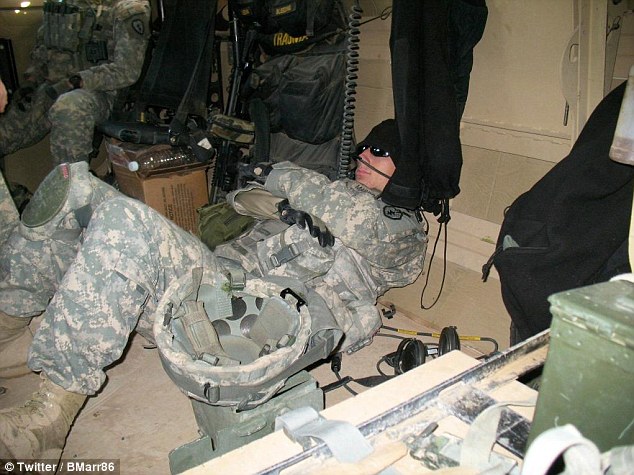 Marrocco expects to spend three to four  months at Hopkins, then return to a military hospital to continue physical  therapy, his father said.

Before the operation, he had been fitted with  prosthetic legs and had learned to walk on his own.

He had been living with his older brother in  a specially equipped home on New York’s Staten Island that had been built with  the help of several charities.

Shortly after moving in, he said it was ‘a  relief to not have to rely on other people so much.’

The home was heavily damaged by Superstorm  Sandy last fall.

Despite being in a lot of pain for some time  after the operation, Marrocco showed a sense of humor, his father said.

He had a hoarse voice from the tube that was  in his throat during the long surgery and decided he sounded like Al Pacino. He  soon started doing movie lines.

‘He was making the nurses laugh,’ Alex  Marrocco said.