In this episode I discuss the monumental waste of taxpayer (that’s us) dollars that is the F-35 Joint Strike Fighter. You would think at $100 million a copy it could at least get off the ground. And this the technological marvel which is supposed to replace the venerable A-10 Thunderbolt – the Warthog.

Segment two is a look at Obama’s latest attempt at gun control as he and his administrative hacks will attempt to require the use of smart gun technology for the military, law enforcement and all of us.

In segment three I discuss a brave young man from Alabama who shot an intruder while he was home alone. Although it was a happy, there are two sides to this story. END_OF_DOCUMENT_TOKEN_TO_BE_REPLACED

The other day, we brought you a story about an Oregon military vet who took Joe Biden’s warning shot advice and ended up being charged with Unlawful Use of a Weapon, Menacing and Reckless Endangering. His AR-15 was confiscated as a result, and it won’t be returned unless the judge finds him not guilty.

Perhaps that vet should’ve taken some advice from this Ohio resident who was confronted with a similar incident. While the vet warned his intruder with a shot to the ground, this woman warned her intruder:  “If you move, you’re gonna go to the morgue.”

The Blaze recounted what happened:

“Tammy Takach of Steubenville was sleeping Thursday morning when a noise in her home woke her up. She told WPXI-TV she grabbed her gun and went downstairs to find an intruder who’d entered through a window holding an air conditioning unit. He begged her not to call the police. ‘He stood up and put his hands up,’ Takach told WTOV-TV. ‘He said, “I’m just going to go. I’m sorry,” and I said, “The only place you’re going to go is jail, and if you move, you’re gonna go to the morgue, because I’m going to blow your f-ing head off.”’ Takach kept the gun aimed at him the entire time until police arrived. Upstairs, Takach’s son was still asleep, completely unaware of what was happening.”

Dramatic 911 calls of the moments before and after a mother shot a home intruder while trying to protect  her nine-year-old  twins have been released.

Rather than call police when the man broke into her house, Melinda Herman took the twins – and her husband’s handgun – to the attic and called her husband, who then called police on her behalf.

During the phone call, Donnie Herman can be heard trying to reassure his wife, before telling the dispatcher she was shooting intruder Paul Slater.

He can then be heard screaming at his wife to  ‘shoot him…shoot him again’.

Recordings obtained by The Atlanta  Journal-Constitution of two calls to 911, detailed the terrifying moments of the burglary – one from an anxious, but calm husband and the other from stunned neighbors.

Though the husband’s conversation with his wife is not audible on the recording, he can clearly be heard giving instructions to his wife and asking her questions before relaying the information to the 911 operator.

With her husband’s .38 caliber handgun,  Melinda shot Slater five times, though did not kill him. Donnie told the operator he could hear him was pleading for his life. 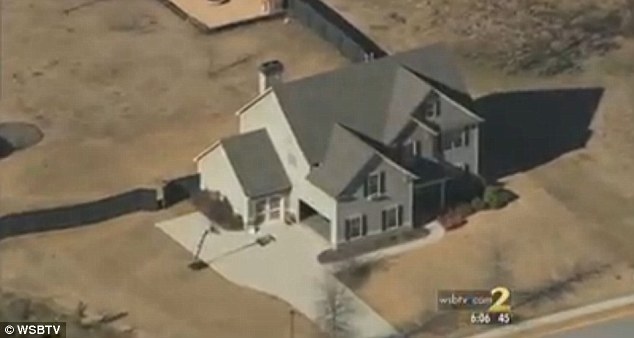 More than he bargained for: Melinda Herman can he heard  firing all six rounds of the handgun, missing only once 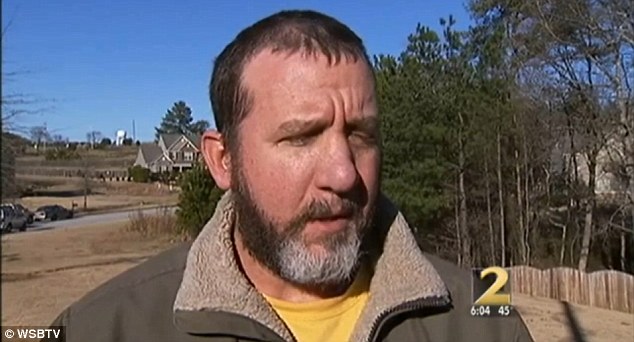 Husband: Donnie Herman says he is proud of his wife, and  he’s glad his family is safe

Despite his injuries, Slater managed to run from the house and get into his SUV and drive away.

This was when a neighbor called 911 to report gunshots. Soon after this, Melinda and her two children arrived at a neighbor’s home, visibly shaken.

As Donnie is still on the phone to the 911 dispatcher, she tells him that his neighbor is on the other line.

Police and EMS can be heard arriving at the scene.

Deputies found Slater bleeding in his car in another neighbor’s driveway. He remains hospitalized with  puncture injuries to  his lungs, liver and stomach.

Donnie finally receives the news he has been waiting for, more than ten minutes after he first called 911. The operator says: ‘The kids are at your neighbor’s house.  Your wife is okay.’

Donnie Herman appeared on Good Morning America after the home invasion and called his wife a ‘hero’ and said she would do what ‘any responsible gun owner would do’. 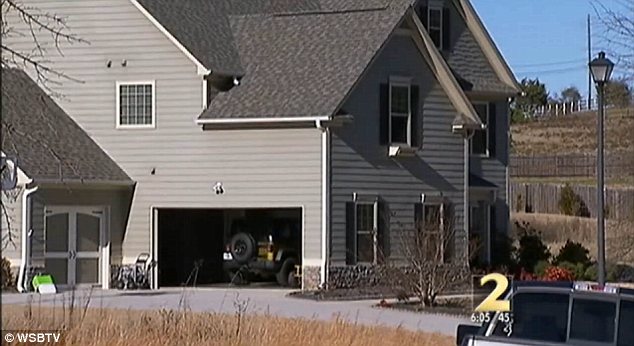 Home invasion: Melinda was at home with her nine-year-old twins in their Loganville home, when the suspect began ringing the  doorbell before breaking in 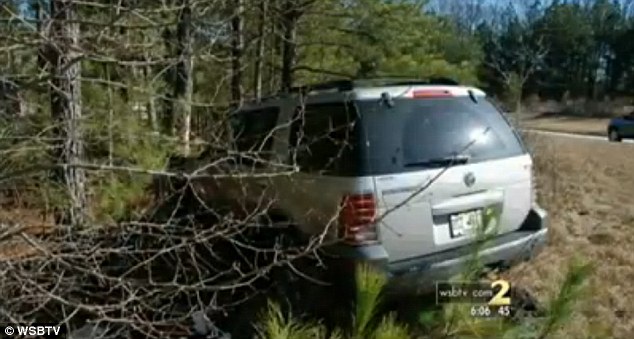 Not exactly a clean getaway: Slater managed to return to  his vehicle, but his injuries left him unable to drive, and it wasn’t long  before he crashed into a wooded area

It later emerged that Paul Slater broke into  the house – thinking no one was home – with a crowbar and went from room-to-room until he came upon the family in the attic.

Walton County Sheriff Joe Chapman told  WSBTV after the burglary:  ‘The perpetrator opens that door. Of course, at that time he’s staring at her, her two children and a .38 revolver.’

Sheriff Chapman told the Atlanta  Journal-Constitution: ‘The guy’s face down, crying. The woman told him to stay down or she’d shoot again.’

WSBTV reported that Slater has a long criminal history and was released from prison in August.

The woman’s husband, Donnie Herman, is just  glad his wife and kids are safe.

Mr Herman told WSBTV: ‘My wife is a hero. She protected the kids. She did what she was supposed to do as a responsible,  prepared gun owner.’

Now, juxtapose this situation with what some consider common sense gun control safety measures. Imagine the wife, in the heat of the moment, couldn’t get to the gun due to a law forcing her husband to lock it away. If she were able to reach the weapon, she found it unloaded and the ammunition, due to another regulation, had to be stored away from the weapon. Furthering the scenario, she was able to obtain the weapon and ammunition but the pistol had a trigger lock affixed that even for the experienced can take several minutes to open without the added stress of an intruder bearing down on her. The result of the above altercation would have quite different thanks to feel-good gun safety rules. They should be reclassified as Intruder safety regulations.