Angrily thwacking the ketchup bottle to coax  out the stubborn sauce could soon be a distant memory, after scientists invented  an edible non-stick coating.

Applying just a thin layer of the tasteless  substance – known as Liquiglide – to the inside of the bottle creates a slippery  surface allowing the contents to slide straight out.

The non-toxic lubricant can be used on both  plastic and glass containers to ensure that consumers can enjoy every last drop  of not only their favourite tomato sauce, but other sticky condiments as well,  such as mustard and mayonnaise. 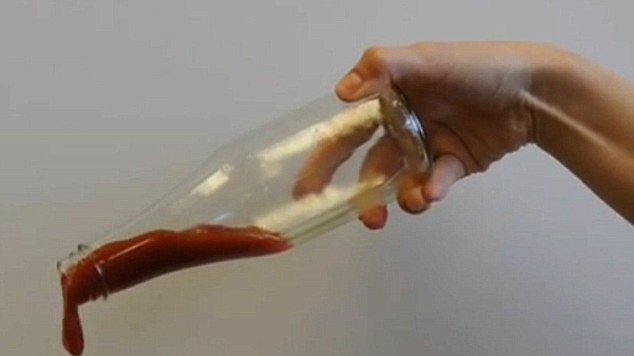 The ingenious Liquiglide Ketchup Bottle,  created by engineers at the Massachusetts Institute of Technology, came third in  the inaugural Visitor Vote for the Design Museum’s Designs of the Year  2013.

According to the inventors, each year an  estimated one million tonnes of condiments are thrown away globally because  leftovers cannot be scraped from jars and bottles, with up to 15 per cent of a  product remaining in its container. 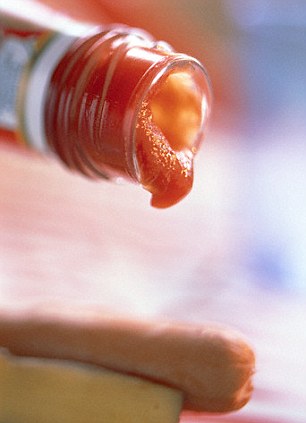 They also claim that eliminating safety caps  on squeeze bottles could save 50,000 tons of plastic a year.

Not only does the product save waste and  reduce the need for packaging, but it could stop your beer or cola going flat.

The smoother surface created by coating the  inside of cans and bottles for carbonated drinks with the substance, slows the  release of carbon dioxide bubbles from a drink, keeping it fizzy for longer.

The first consumer product with Liquiglide  coating is expected to hit supermarket shelves by next year.

Since June visitors have been voting for  their favourite entries from the 99 nominations for Designs of the Year in a  polling station at the exhibition.

Other entries included The Shard, the London  2012 Olympic Cauldron and GOV.UK – a revolutionary website combining all of the  UK’s government websites under one single domain – which was named official  Design of the Year Winner 2013.

Previous victors include the London 2012  Olympic torch and a folding plug.

But the winner of the newly-introduced public  vote, announced yesterday, was Child ViSion, a fluid-filled lens that allows  children to self-adjust the prescription strength of their glasses.

Designed for children aged 12-18, it  uses  fluid lenses that allow children without access to an optician to  change their  prescription as their eyesight changes and evolves.

Professor Josh Silver, designer of the Child  ViSion glasses, said: ‘We are  delighted to have won the Visitor Vote. There are  two aspects to  eyewear, firstly it has to function properly and give you clear  vision,  but equally important, it also has to look good.