The Drone Awards is a new photography competition dedicated to the emerging art of aerial photography. This year’s inaugural competition has just revealed its winning snaps, a spectacular assortment of photographs ranging from gorgeously abstract images to profoundly unique portraits of urban life. END_OF_DOCUMENT_TOKEN_TO_BE_REPLACED

At the National Press Club in Washington, DC, Bell helicopter has unveiled its new V-247 Vigilant tiltrotor drone for the US Marine Corps. Like the company’s V-22 Osprey, the Unmanned Aerial System (UAS) can lift off and hover like a helicopter, yet has the range and speed of a fixed-wing aircraft. According to Bell, the Vigilant can carry out combat reconnaissance missions from land bases without runways or from small ships with flight decks. END_OF_DOCUMENT_TOKEN_TO_BE_REPLACED

AeroVironment’s new Snipe Nano Quadrotor is a man-packable drone with the potential to be carried by every foot soldier, vastly increasing situational awareness and individual capability. The Snipe will also be available commercially later this year for police, first responders and all those who need to be able to see what’s happening in places they cannot safely go.

Announced at AUVSI in Dallas today, the Snipe Nano Quad UAS weighs just 140 grams (5 oz) and fits into a small hard case light enough to be carried – though AeroVironment has not yet disclosed the weight of the entire UAS including the ruggedized touch screen controller. END_OF_DOCUMENT_TOKEN_TO_BE_REPLACED 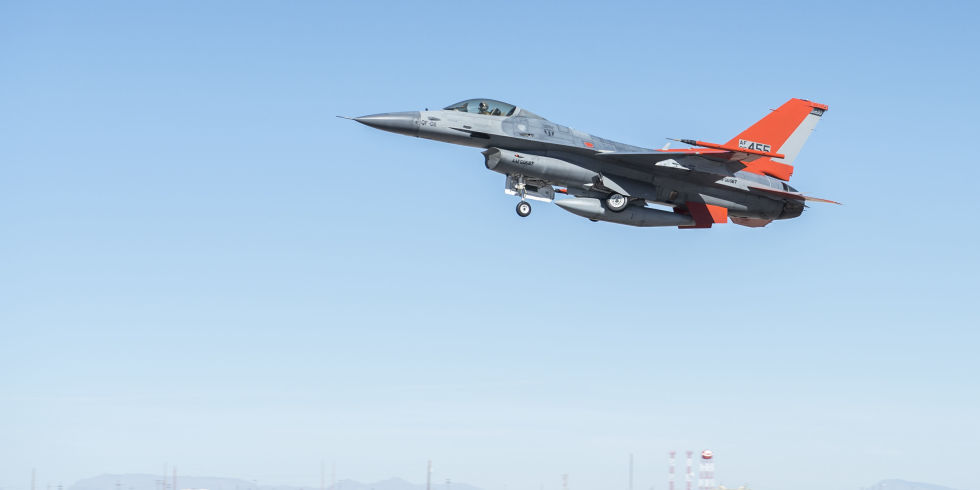 The U.S. Air Force turned an F-16 fighter into an autonomous combat drone capable of flying combat missions on its own and then returning to fly alongside a manned aircraft. The program, known as “Have Raider II,” could lead to older U.S. fighters acting as semi-disposable wingmen for more modern planes, conducting missions too dangerous for manned aircraft to carry out.

END_OF_DOCUMENT_TOKEN_TO_BE_REPLACED

The world’s first drone capable of detecting explosives, narcotics and other chemical compounds from a safe distance has been unveiled.

The drone-mounted system automatically pinpoints and analyzes threats from an operational radius of up to 1.8 miles and beams images back to its controllers in real-time.

END_OF_DOCUMENT_TOKEN_TO_BE_REPLACED

FAR from the airplane-sized craft that are the face of cutting-edge warfare, a much smaller revolution in drones is under way.

could soon be zipping through indoor and outdoor spaces, running reconnaissance missions that others cannot. They would allow soldiers to look over hills, inside buildings and inspect suspicious objects without risk.

Unlike their larger cousins, whose complex navigation systems let them fly autonomously for hours or even days, MAVs are not known for their smarts. They typically rely on a GPS signal to tell them where they are, and on human operators for nearly everything else, such as where to go, what to look for and where to land.

Now researchers led by Roland Brockers at the NASA Jet Propulsion Laboratory in Pasadena, California, have developed a MAV that uses a camera pointed at the ground to navigate and pick landing spots. It can even identify people and other objects. The system enables the drone to travel through terrain where human control and GPS are unavailable, such as a city street or inside a building.

A human operator needs to tell the drone only two things before it sets off: where it is and where its objective is. The craft figures out the rest for itself, using the camera and onboard software to build a 3D map of its surroundings. It can also avoid obstacles and detect surfaces above a predetermined height as possible landing zones. Once it selects a place to put down, it maps the site’s dimensions, moves overhead and lands.

In a laboratory experiment, a 50 centimeter by 50 centimeter quadrotor craft equipped with the navigation system was able to take off, travel through an obstacle-filled indoor space and land successfully on an elevated platform. Brockers’s team is now testing the system in larger, more complex environments. The system was presented at the SPIE Defense, Security and Sensing conference in Baltimore, Maryland, in April.

Vijay Kumar of the University of Pennsylvania in Philadelphia says that autonomous navigation and landing capabilities are unprecedented in a drone of this size. “Typically the information required to locate a landing site and stabilize a vehicle over it is coming in at a 100 times a second,” he says. “No one else has been able to design a system so small with this kind of processing power.”

With such capabilities making their way into ever smaller craft, it may not be long until the PD-100 Black Hornet (pictured right), which is set to become the world’s smallest operational drone, gets an upgrade as well.

As it stands the PD-100, which has been in testing by Norwegian manufacturer Prox Dynamics since 2008, can navigate autonomously to a target area using onboard GPS or fly a pre-planned route. It can also be controlled by a human from up to a kilometer away, has an endurance of up to 25 minutes, can hover for a stable view, and fly both indoors and out.

At just 20 centimeters long and weighing about 15 grams, the PD-100 makes the drone created by Brockers’s team look like a behemoth. And while it may look like a toy, Prox Dynamics claims it can maintain steady flight in winds of up to 5 meters per second. This has attracted the attention of the UK Ministry of Defence, which last year issued a request for the vehicle under the name “Nano-UAS”.