This collection of rare color photos of Berlin in 1937, taken by Thomas Neumann and uncovered from Norwegian archives,  show life in the German capital during a tumultuous decade.

They capture scenes in the vibrant city,  which was under the iron grip of Adolf Hitler and his Third Reich at the very height of his power. Yet just eight years later the city was in ruins as Russians and Allies occupied it in victory.

But at the time these images were taken,  Hitler’s Berlin was vibrant. Hitler had taken power after the collapse of the democratic Weimar Republic in 1933 as severe economic problems caused by the Depression drove ordinary Germans into the Nazi party’s arms.

As well as chilling pictures of  buildings emblazoned with swastikas, there are scenes of ordinary life as Germans go about their business. They show a child in a sun-drenched square, smiling friends at a train station, a cart selling bananas and a food vendor in a sunny  park. 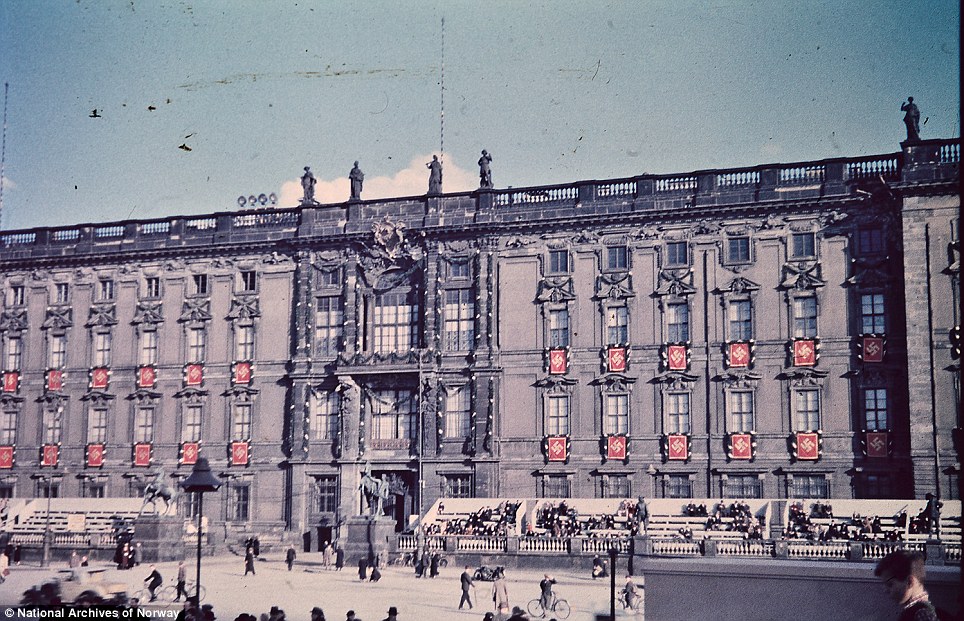 These rare color photos of Berlin in 1937 give a  unique perspective of the capital’s pre-war period. The Stadtschloss, or Berlin  City Palace, was heavily damaged during bombing and demolished by East German  authorities after the war 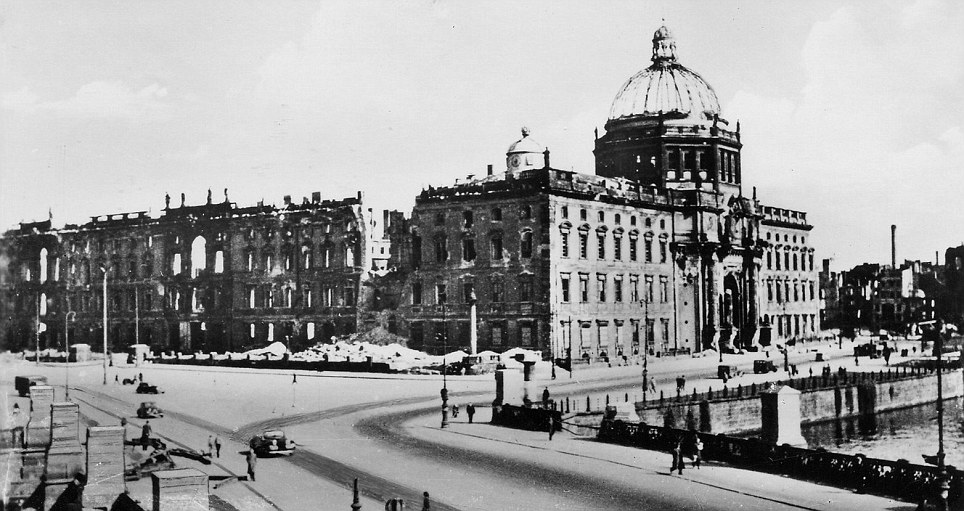 The Stadtschloss after it was gutted by Allied bombs. It was torn down by East German authorities after the war but is  currently being rebuilt 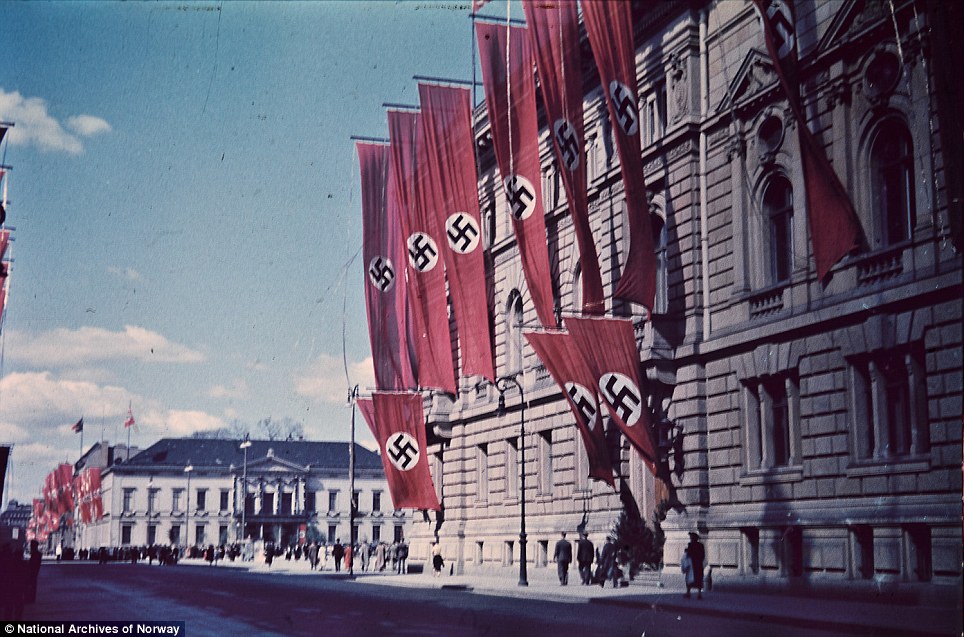 In 1937 Hitler was at the very peak of his power. Ordinary Germans were content and opposition was being ruthlessly crushed

An unknown trio at a train station. It is  likely they were friends or colleagues of the photographer 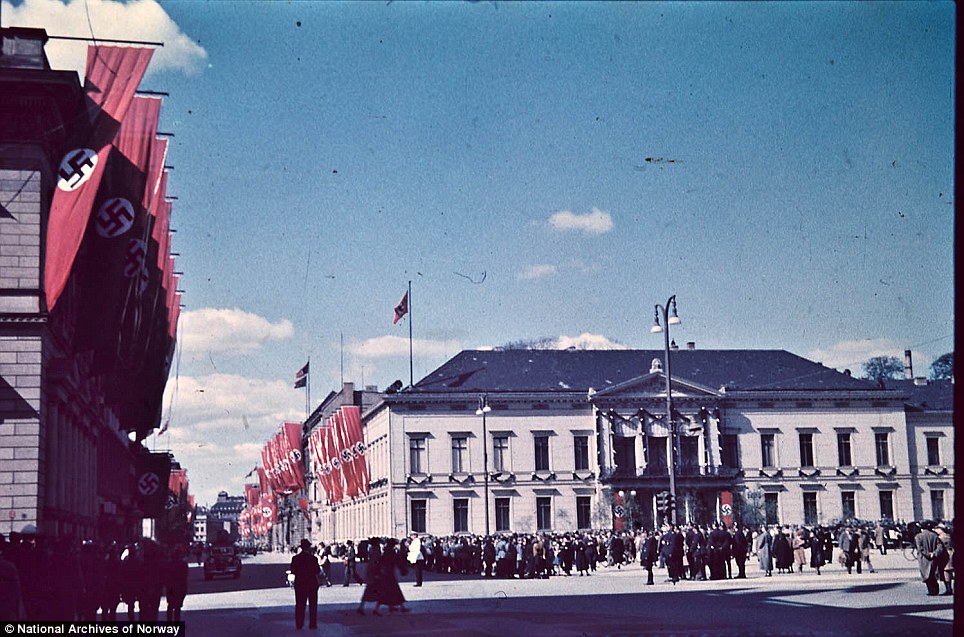 Soldiers and civilians at a rally on the decorated streets in Berlin. This photo is believed to have been taken on Labor Day (May 1) in 1937

A cart sells fruit on a busy Berlin  street

Norwegian engineer Thomas Neumann (1901-1978)  took the photos while working in Germany. The film he used was the first of its kind, and there are few similar images preserved in Norwegian collections. His colored pictures gives historians a valuable view of the interwar period.

In 2007 his photo gallery given to the  National Archives of Norway by his daughter.

Thomas Neumann trained as an electrical engineer in Dresden. After graduating in 1928 he worked in Berlin until 1933.  Neumann was a member of the National Unity party, a fascist organization and was appointed its propaganda leader in Oslo and Akershus. He left the party in 1937 and in October 1944 he was arrested for illegal activities and sent to the notorious Grini concentration camp. 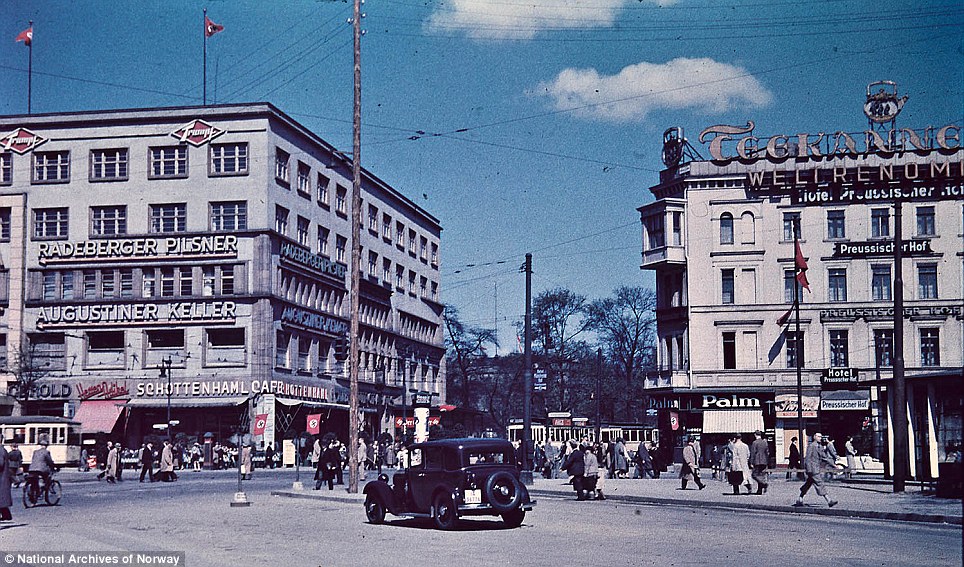 This street scene shows the  Augustiner Keller, a beer cellar in central Berlin. Few buildings were not  festooned with Nazi regalia 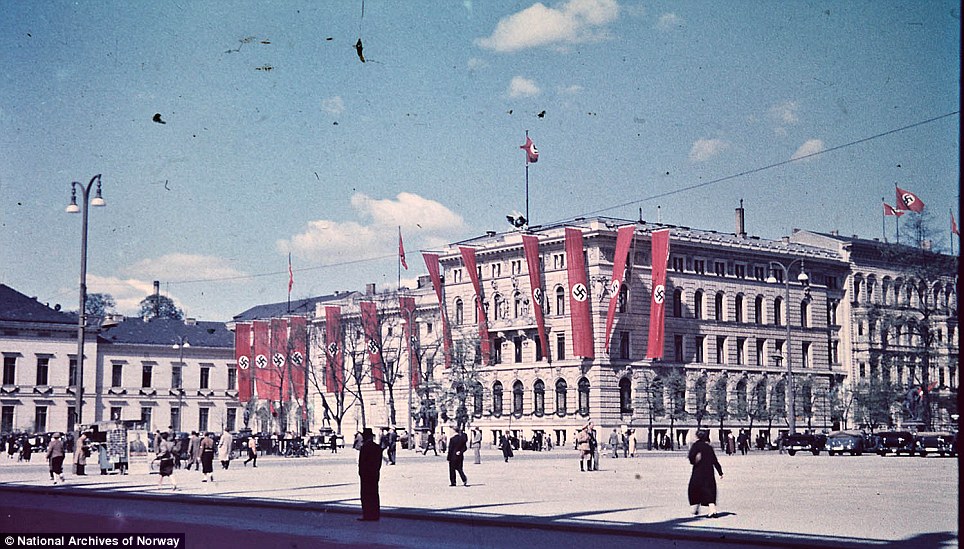 Hitler had consolidated his power by the  mid-1930s, thanks to widespread disillusionment with the Weimar Republic

A little boy outside an unknown sunny square in  Berlin 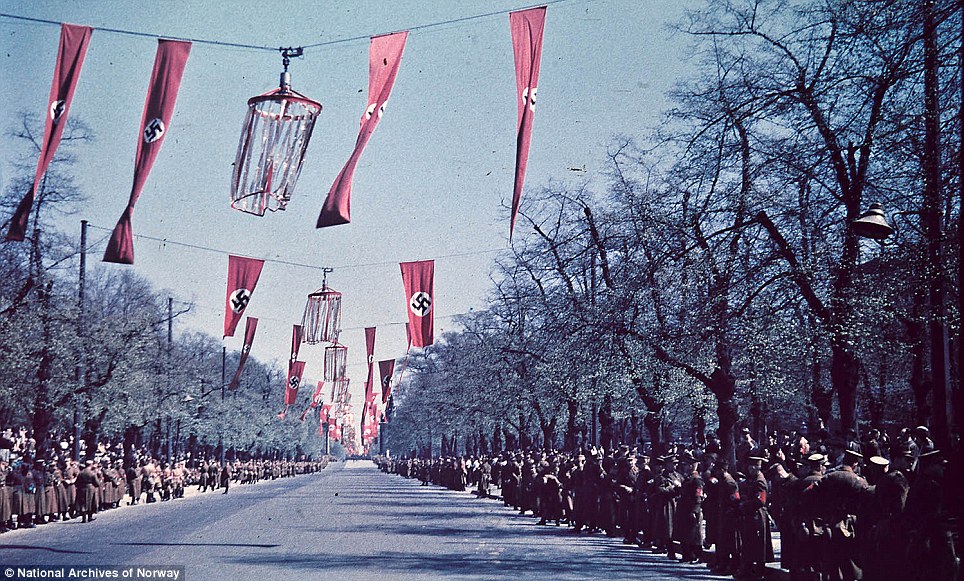 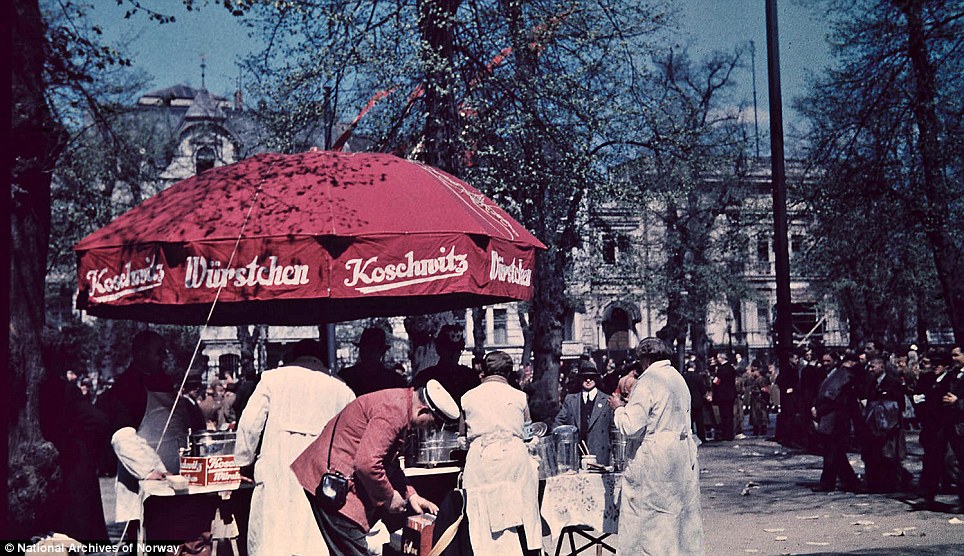 The pictures were taken by Thomas Neumann, a  Norwegian engineer who worked in Germany 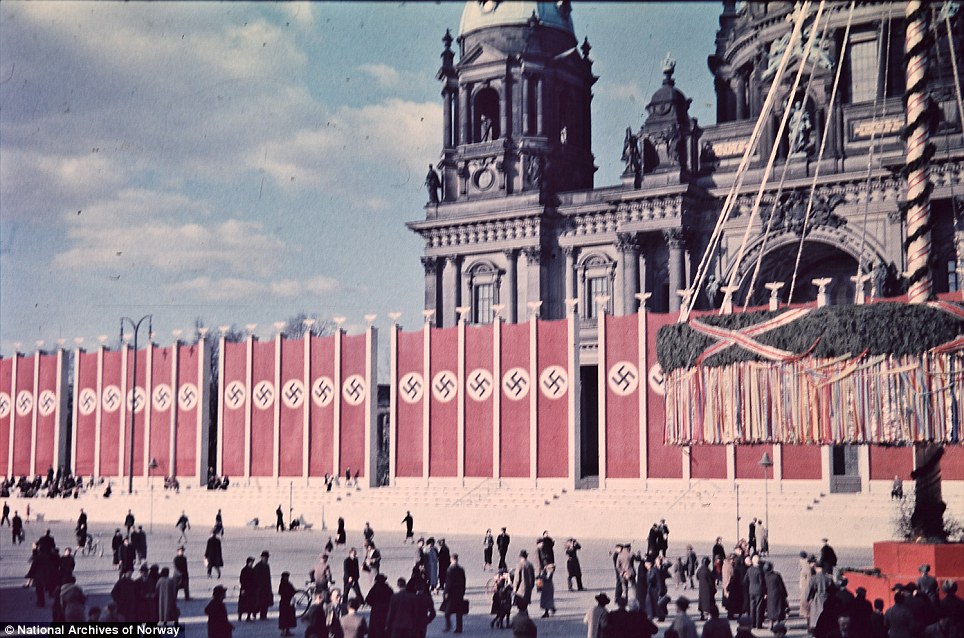 Swastikas and a maypole outside Berlin Cathedral 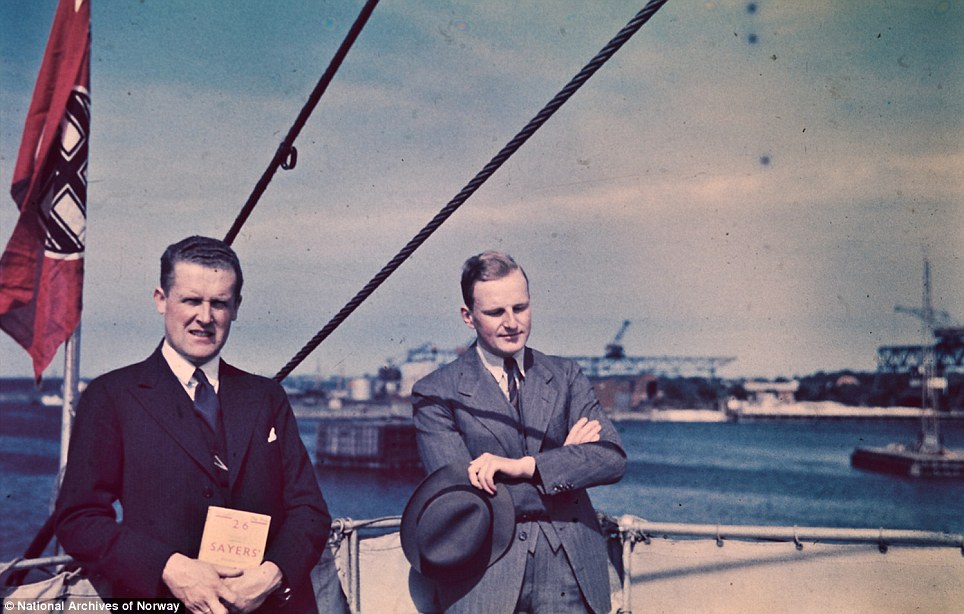 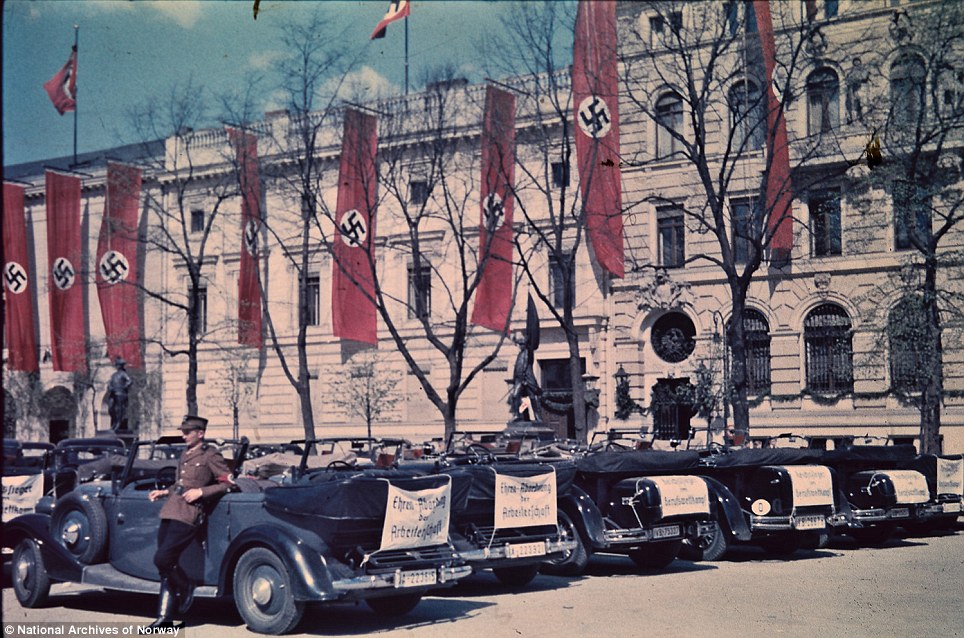 A driver leans against a state car and enjoys a cigarette. The photos show candid moments among Berliners

One candid picture shows a Brownshirt  (a member of Hitler’s paramilitary force) lounging against a state car  in front of a building draped with the maligned Nazi symbol.

On 30 January 1933, President Hindenburg, under pressure from Franz von Papen, appointed Hitler as Chancellor of Germany.  Shortly after the Fuhrer seized power.

Just two years later Germany would invade Poland and begin the most destructive war the world has ever seen. An estimated 60 million people lost their lives as a result of the Second World War and the global political landscape changed forever. 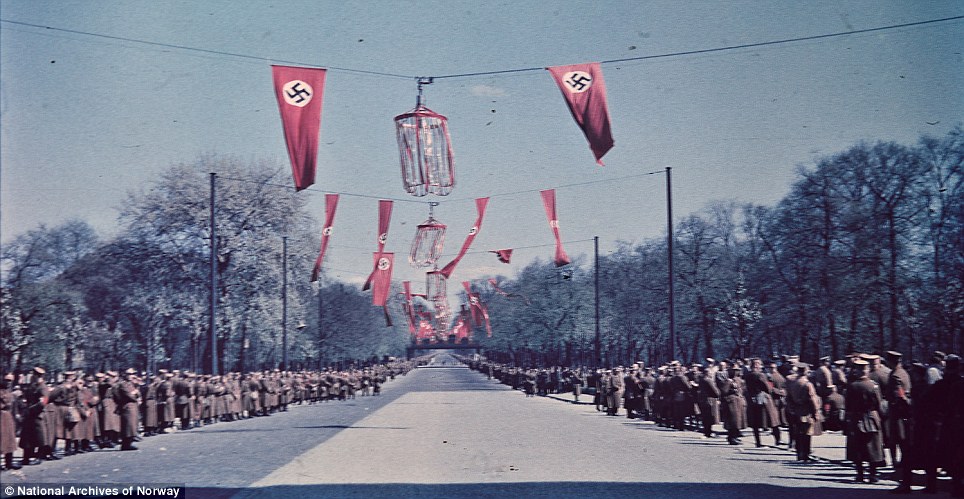 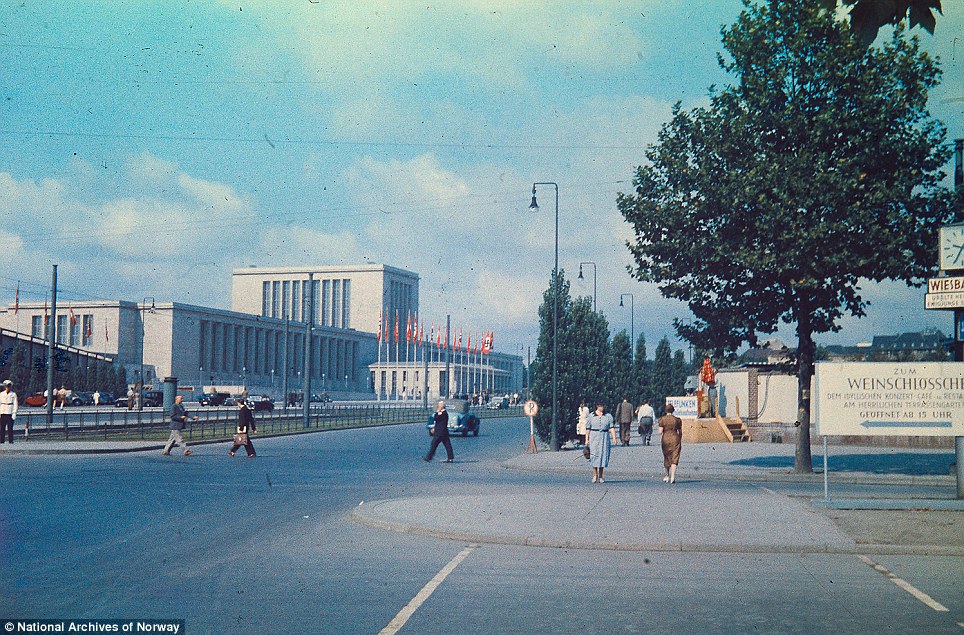 The Messe Berlin situated in Berlin-Westend. It  was completed in 1937 yet heavily bombed by Allied aircraft 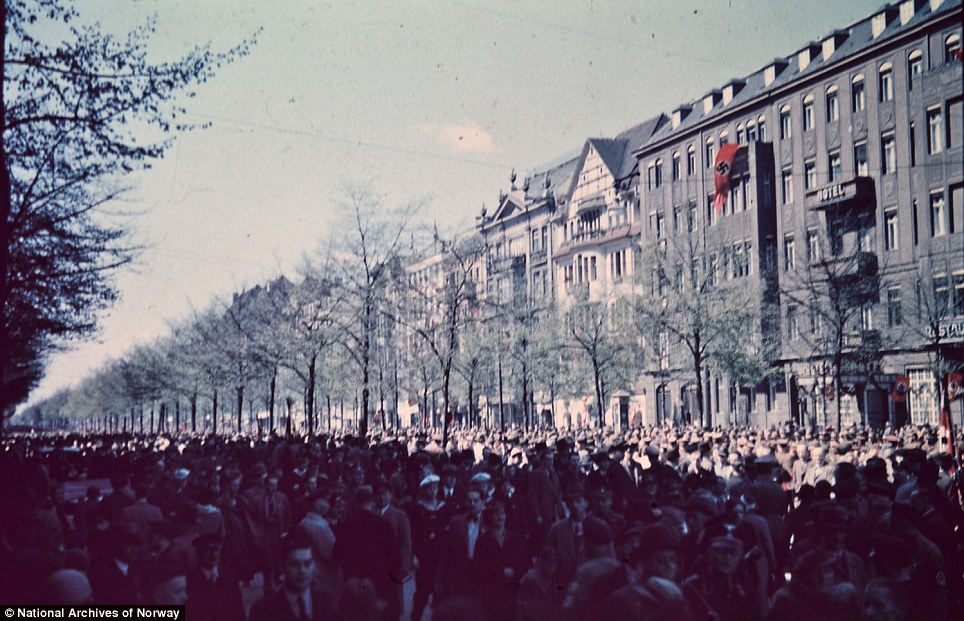 A large crowd in Berlin, presumably in  connection with Labor Day 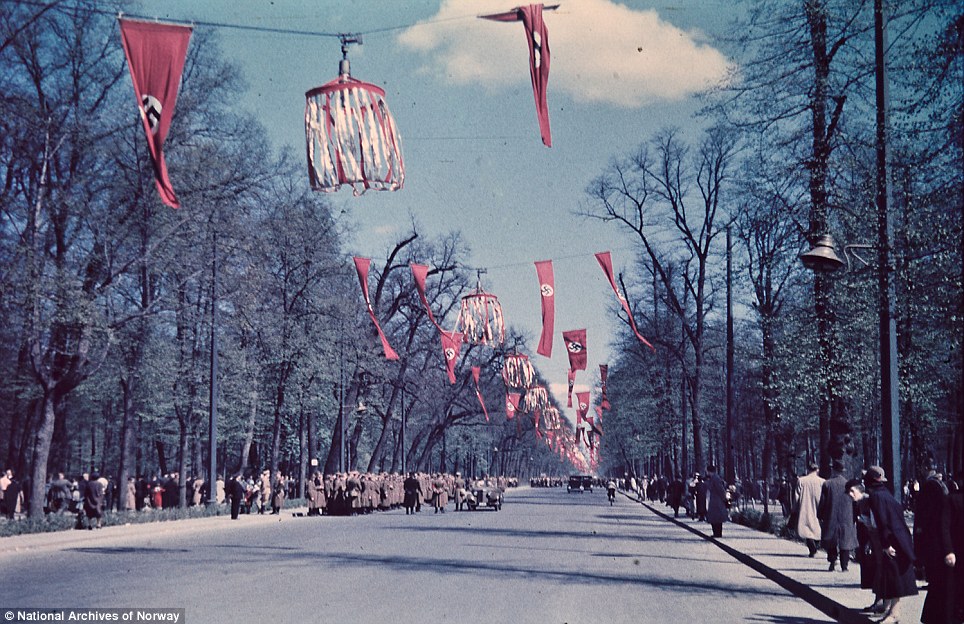 In this picture we see military personnel father beneath decorations. An officer appears to be inspecting the men 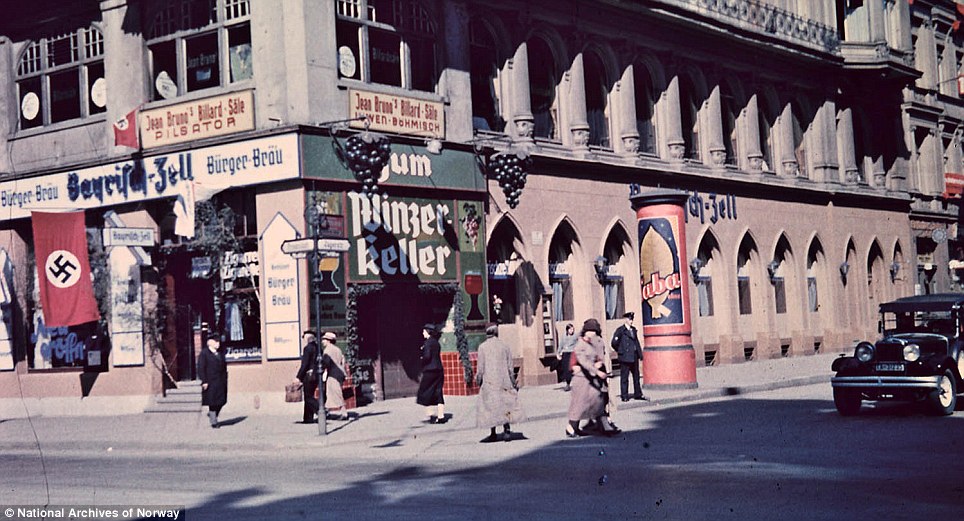 Walkers on a mystery German street. Eight years later it would have been filled with Russian, British and American  troops 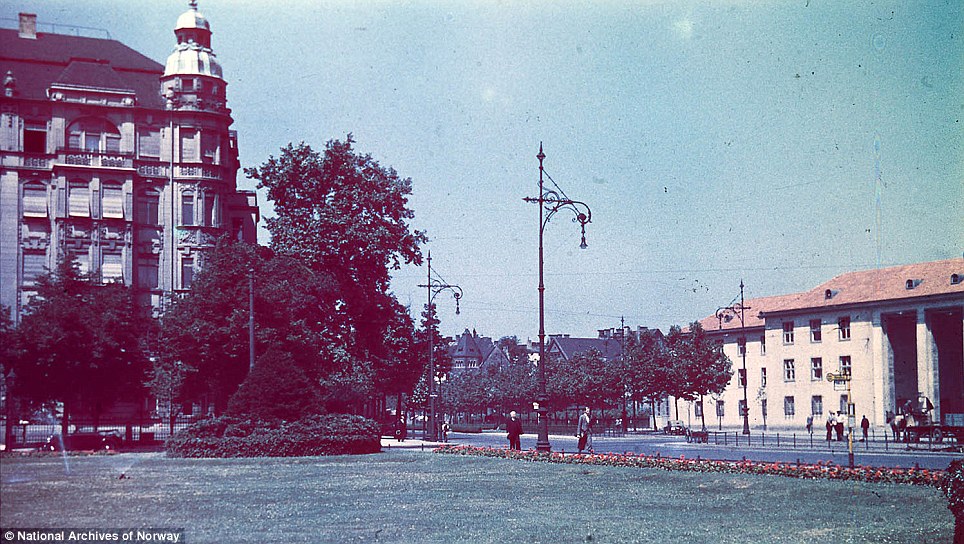 An unknown park in Berlin. The heat of the summer of 1937 meant sprinklers were required to keep the grass verdant 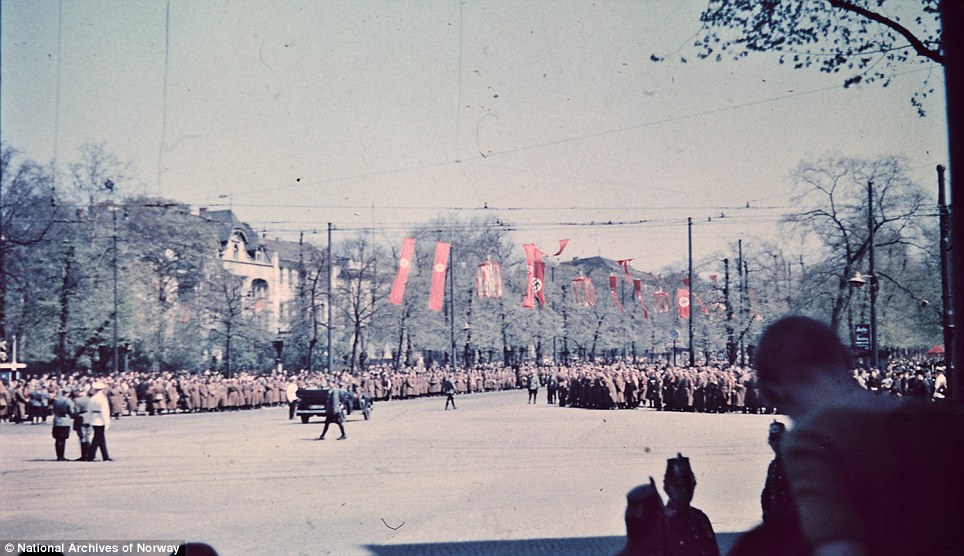 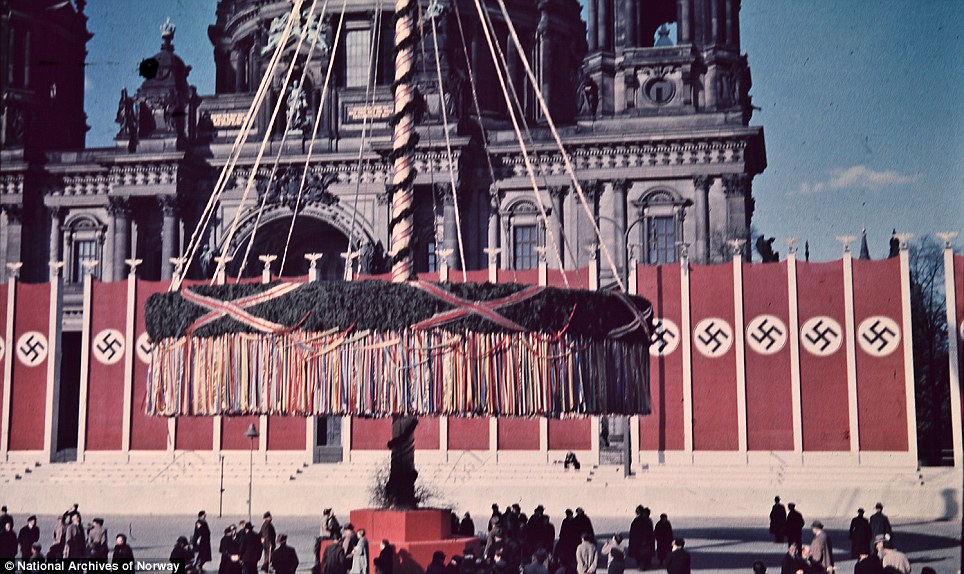