They’re the first tintypes created in a  combat zone since the Civil War.

Seeking to capture the humanity of his peers  fighting in the Afghanistan war, California Air National Guard aerial gunner  Ed Drew asked  them to sit for photos on the battlefield.

While the process was painstaking and  laborious – when duty called, the Brooklyn-based photographer dropped his camera  and jumped into a helicopter – the images were gripping.

Drew was on active duty in the Helmand  Province as a helicopter aerial gunner with a U.S. Air Force Combat Rescue  Unit.

‘To do this process in a war, let alone a  foreign war, is  historically significant,’ Drew told the New Yorker.

‘The process of wet-plate tintypes is  challenging enough with perfect conditions and the availability of  chemicals.  In a foreign war, with the stresses of combat, lack of basic  materials, drying  desert air, and the wind and dust of Afghanistan, it  was quite a  challenge.’

The spectacular images can be viewed at his  website Ed Drew Photography. 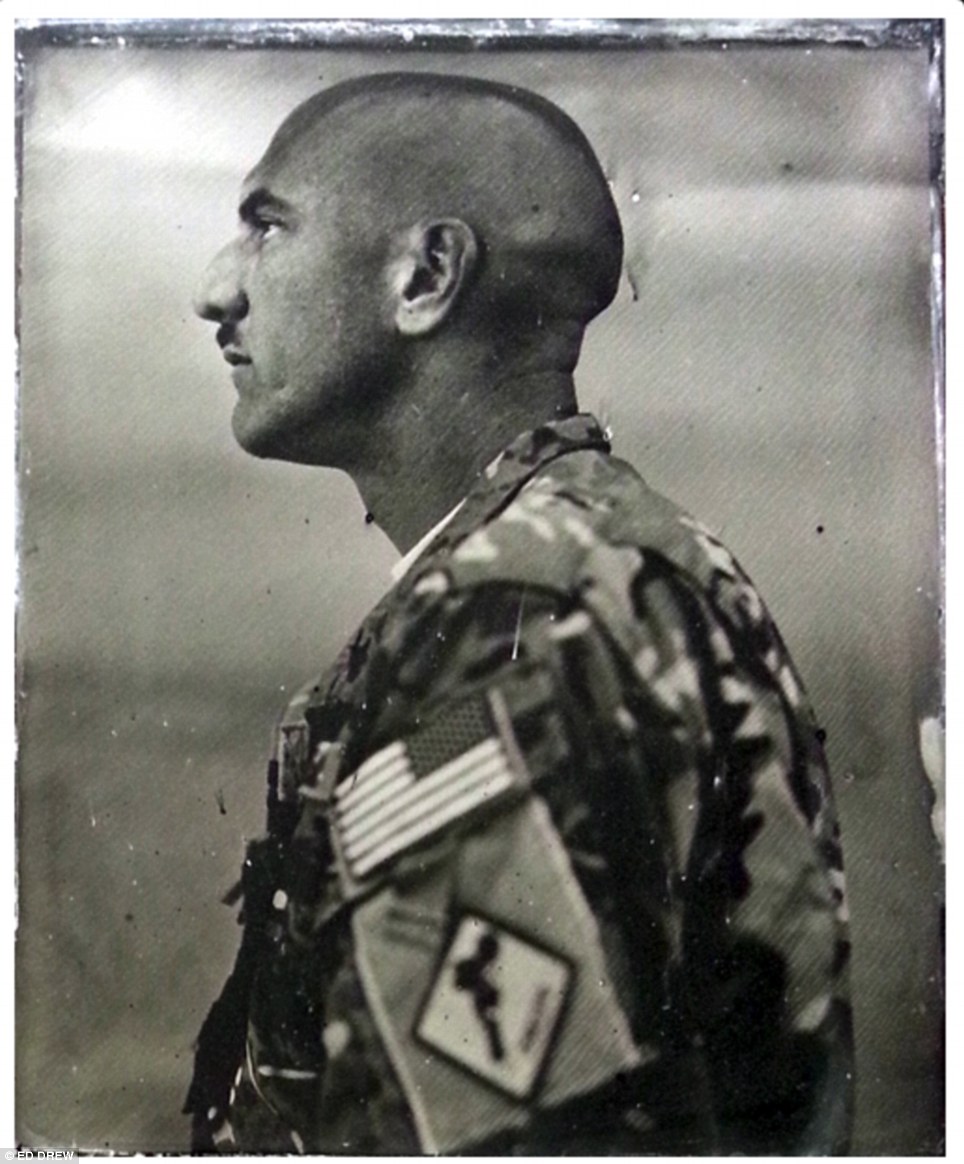 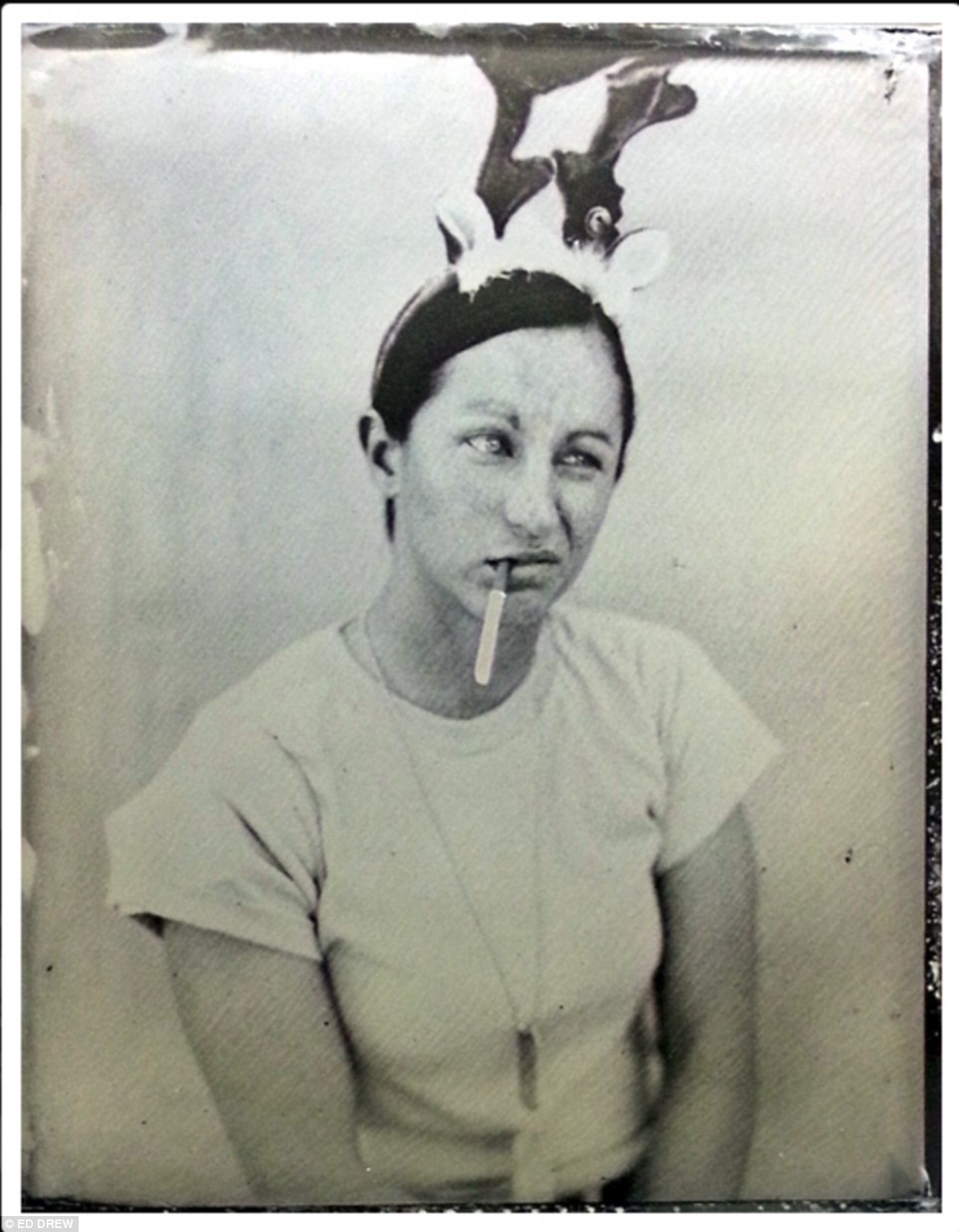 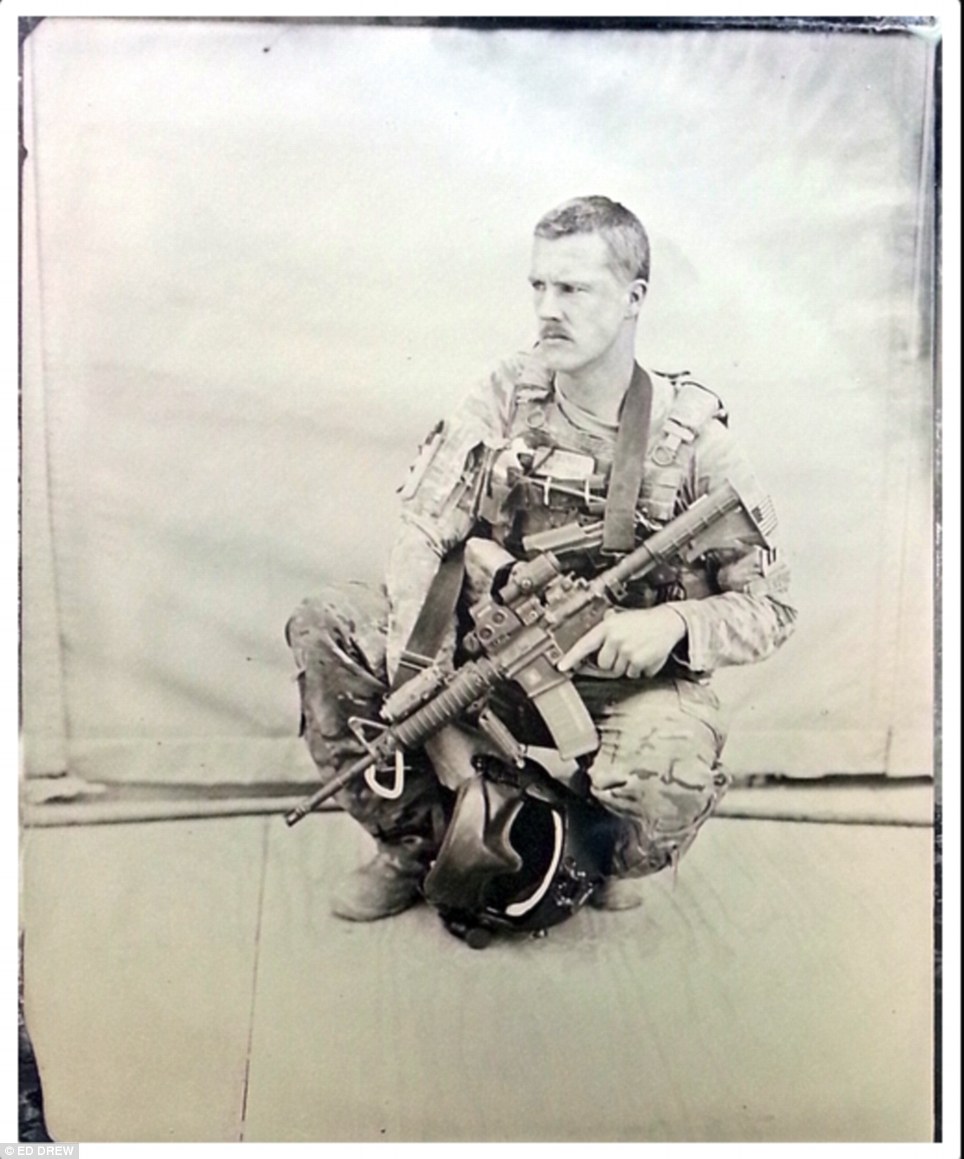 Drew was staff sergeant in the California Air National  Guard and deployed to Helmand Province, Afghanistan, as a helicopter aerial  gunner with a U.S. Air Force Combat Rescue Unit when he captured these images 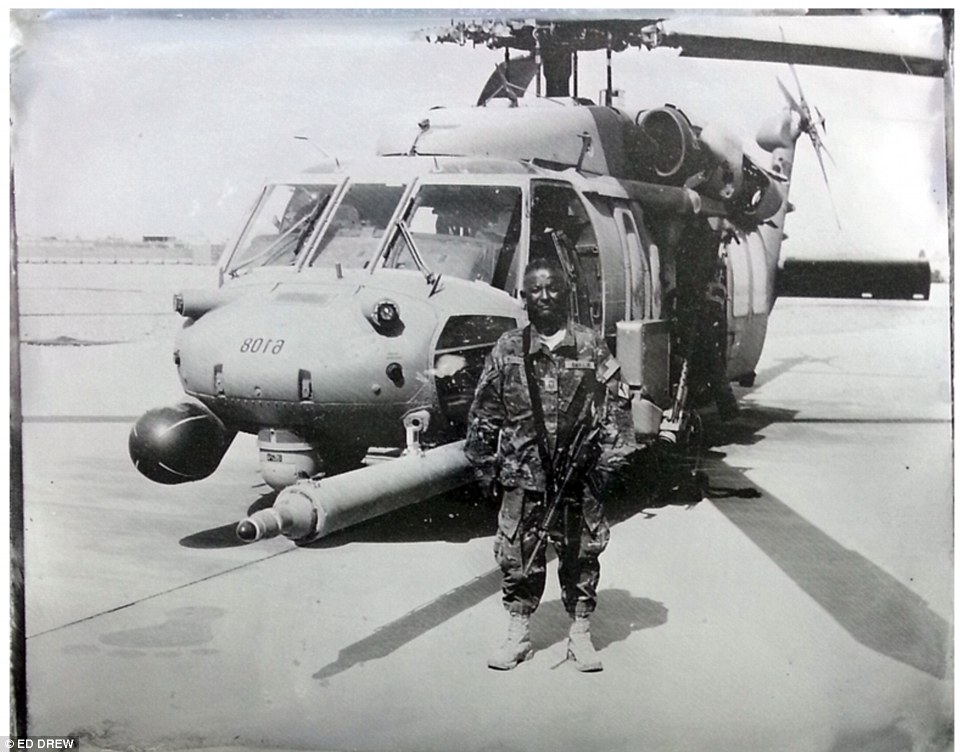 Drew said taking tintype pictures in a war zone was  ‘historically significant’According to fstoppers.com,  tintype ‘is a slow, laborious wet plate process that is difficult to master and  work with in warm temperatures’.Introduced in the mid-nineteenth century,  this artistic process was used to document the Civil War.It involves hand-pouring a collodion mixture  onto a metal plate, which is then made light sensitive in a darkroom via a  silver nitrate solution.

The plate, encased in a light-tight film  holder, is exposed to light in camera and then must be processed within ten  minutes of exposure.

For Drew, the unique artistic process helped  him work through his own involvement in the war.

‘As a photographer and artist I wanted to  achieve something that was physical, one of a kind and very unique,’ he told  PetaPixel.

‘I believe in the Japanese aesthetic of  ‘Wabi-Sabi’ so the idea that something is imperfect and impermanent interests  me.

‘I wanted that to translate in my Afghan  images as metaphors for what I  experienced in the war, I thought tintypes to be  the perfect  photographic process to translate Wabi Sabi in my  portraits.’ 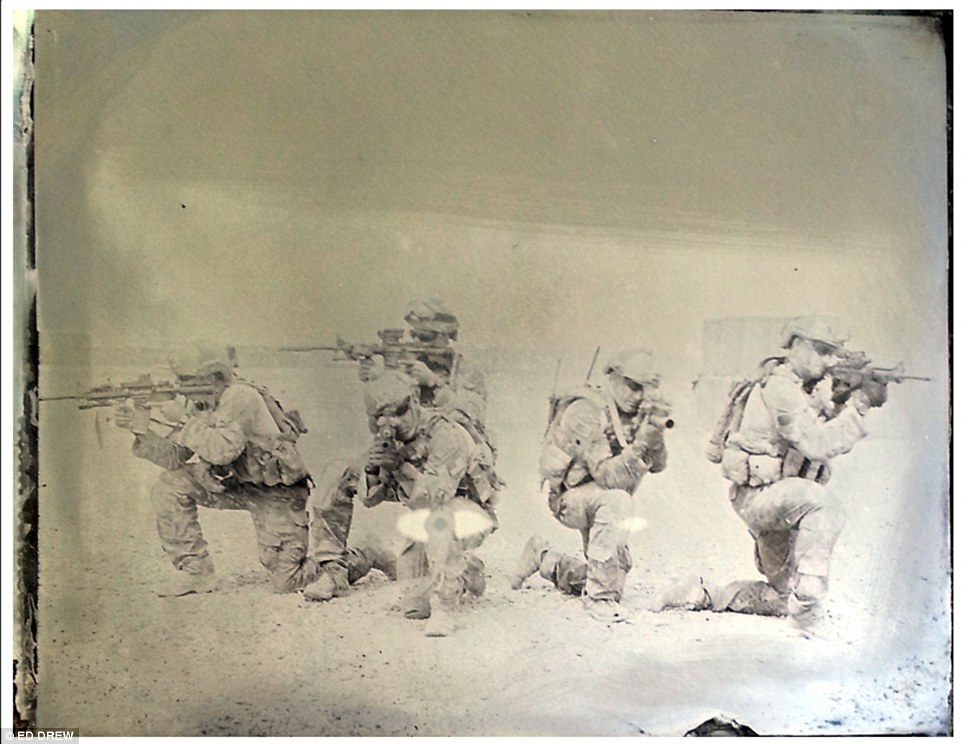 The stresses of combat, lack of basic materials, drying  desert air, and the wind and dust of Afghanistan challenged Drew’s artistic  ability 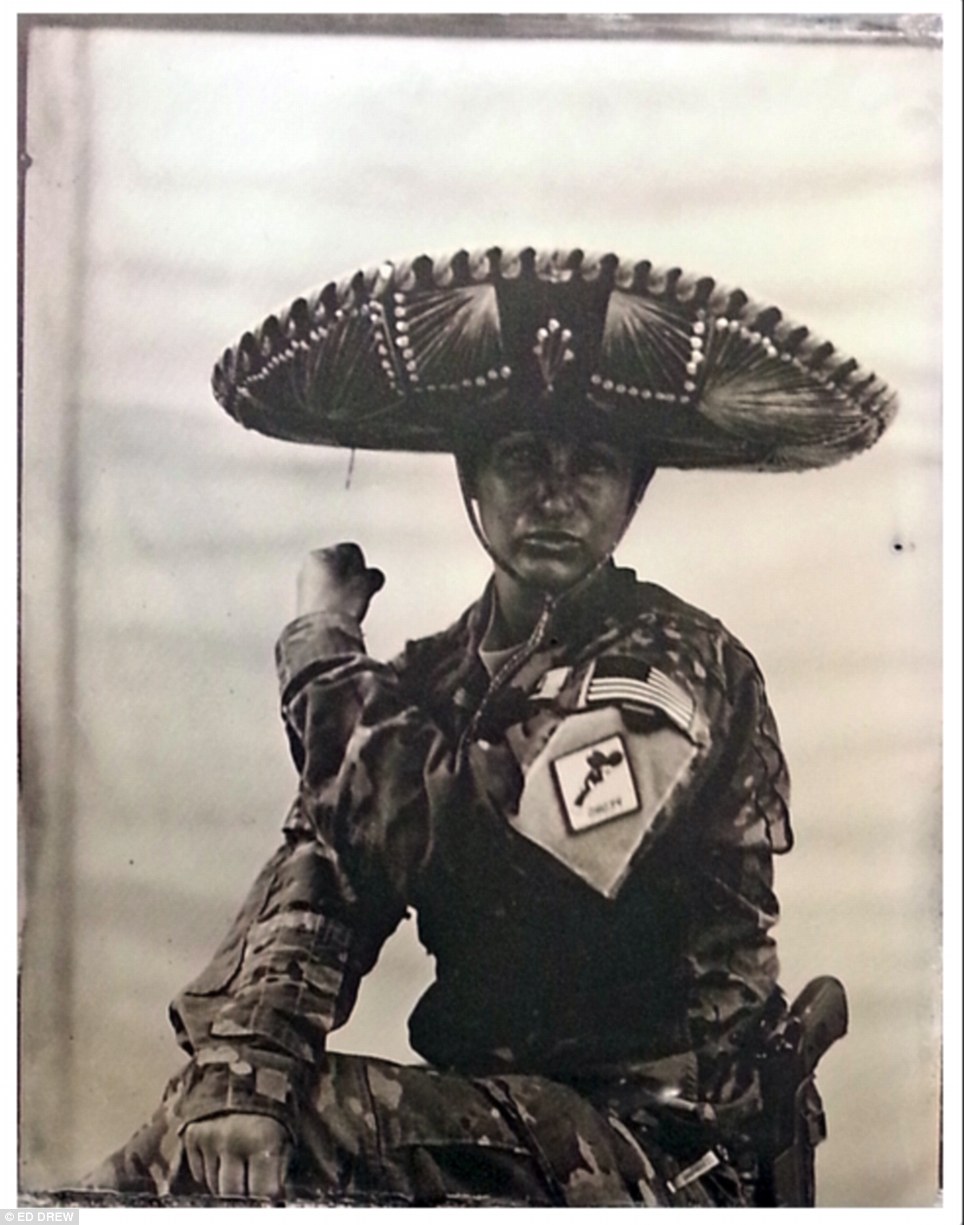 While Drew’s peers were initially reluctant to sit for  him, they went back for more after seeing the incredible results 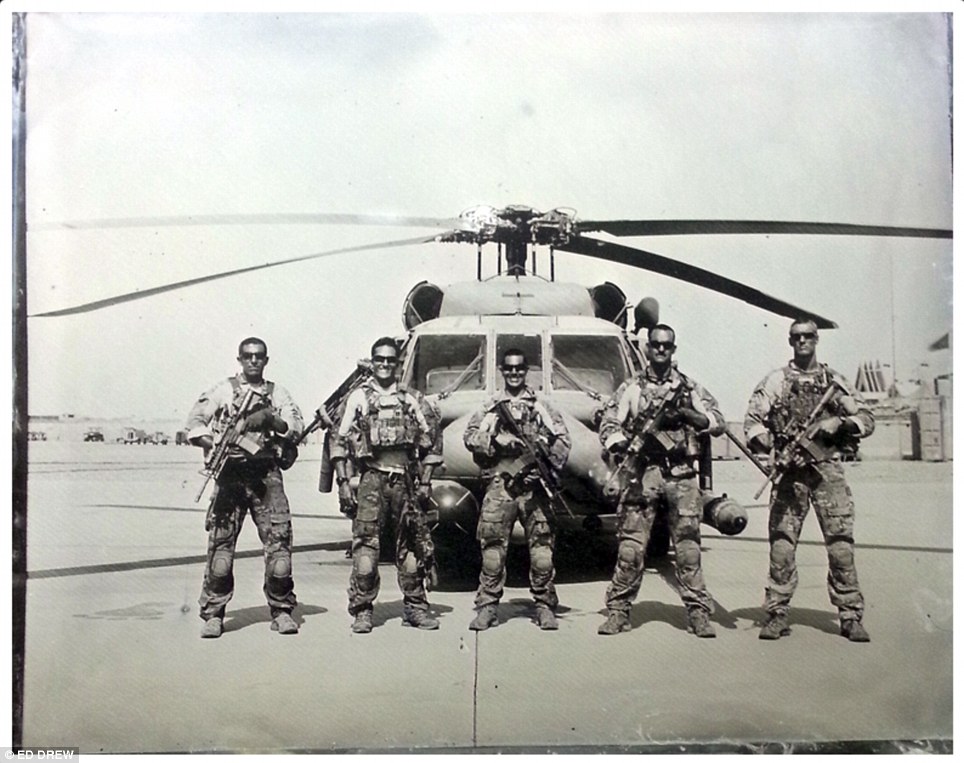 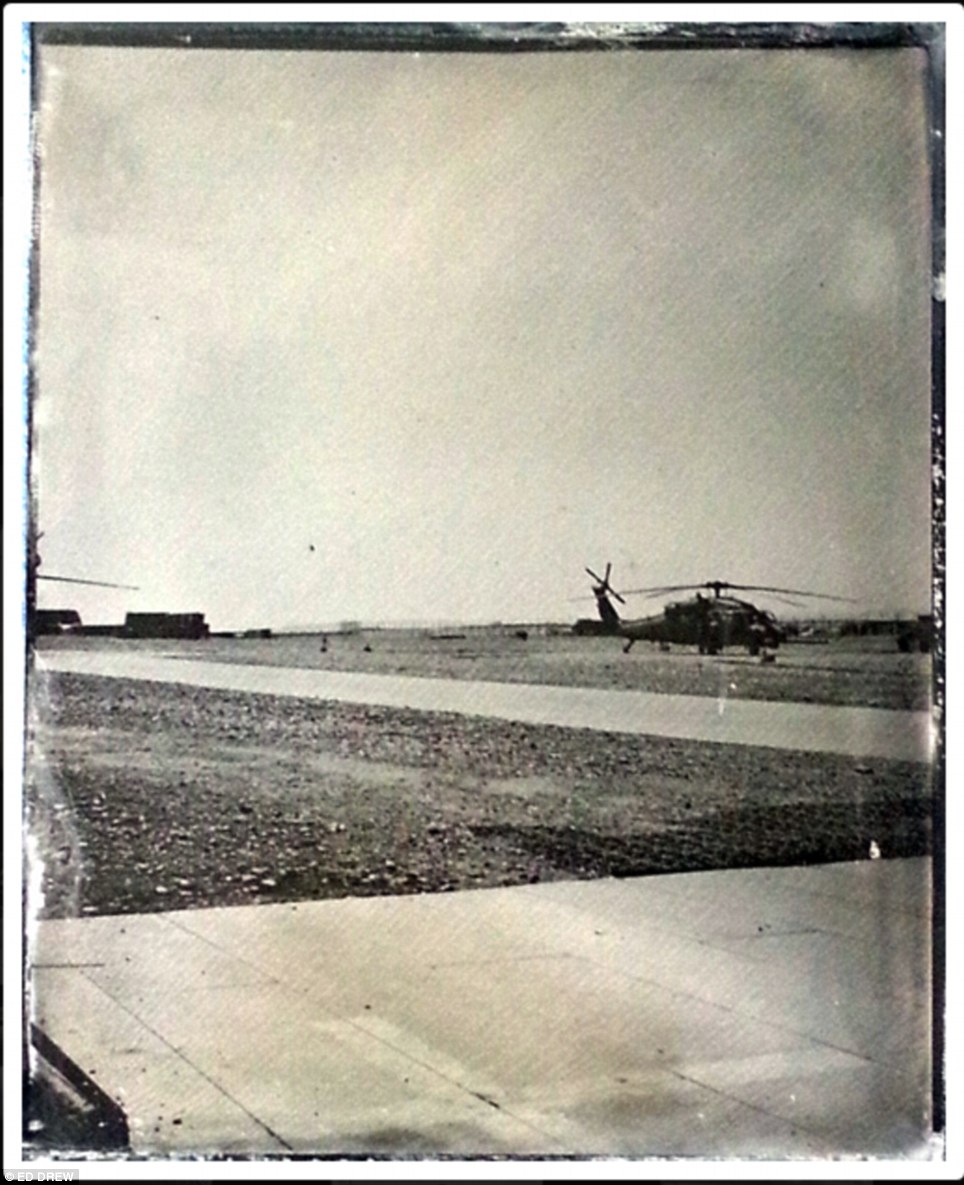 Drew chose tintype photography because he ‘wanted to do  a process that was historical, but also made me take my time and work slowly to  focus on my subject.’But convincing his peers to sit for a formal  portrait was tough, with many frustrated with the painstaking process.’Initially, I really had to convince them to  do it,’ Drew told fstoppers.com.’I work with these guys, but they know me as  a gunner.

‘After they started seeing how amazing the  plates looked, they began booking appointments.

‘One of the guys I flew with is the great  great grandson of Buffalo Bill so  he asked for a photo just like his  grandfather. It was one of my best  plates.’ 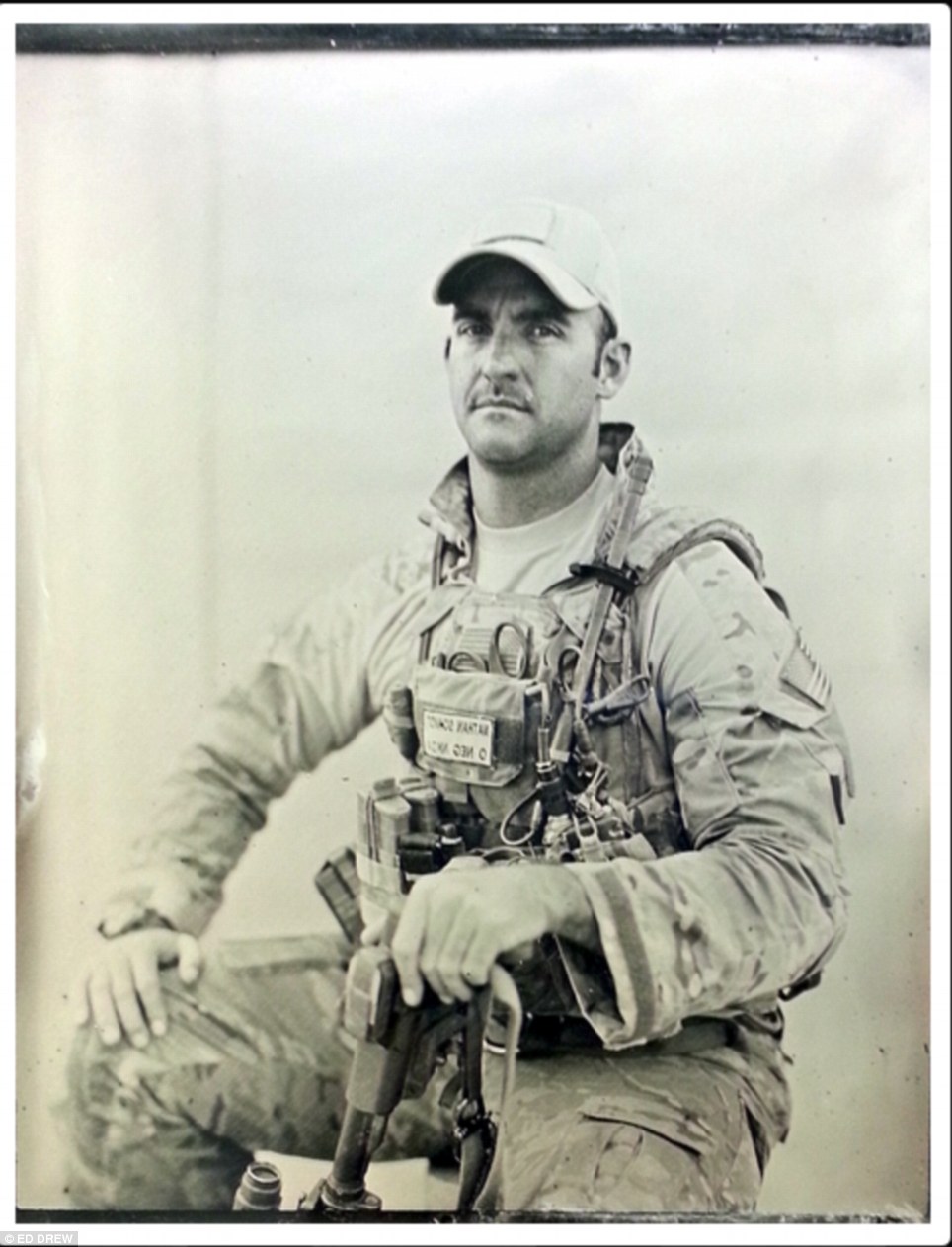 Drew’s photographic goal was to ‘show the humanity of  war in the eyes of airmen I fly combat missions with.’ 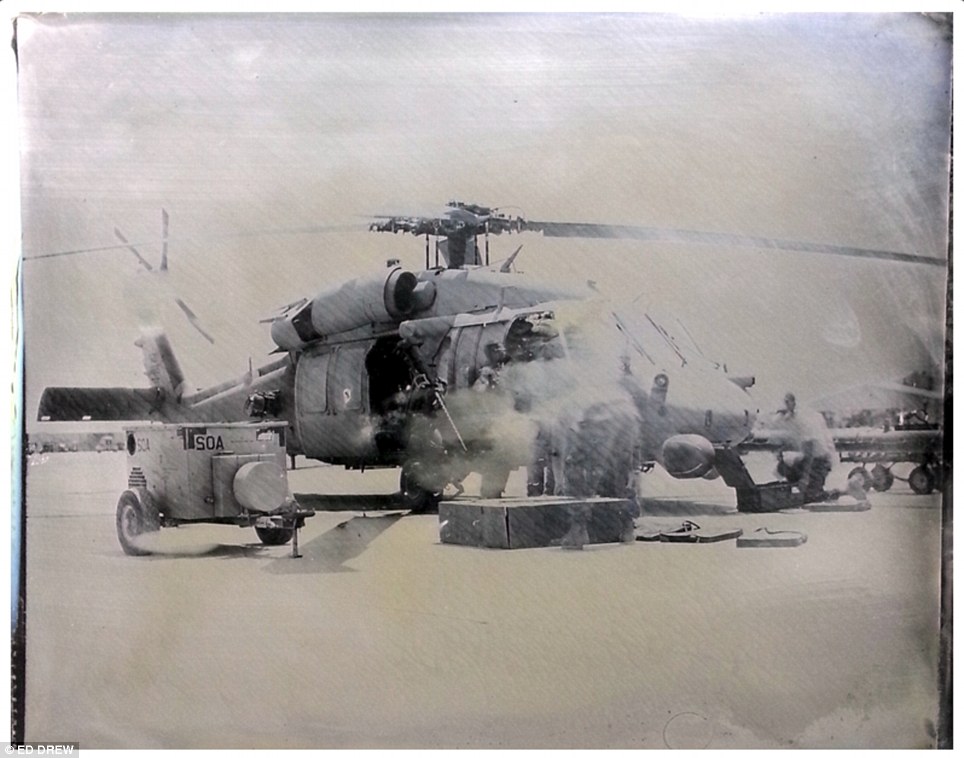 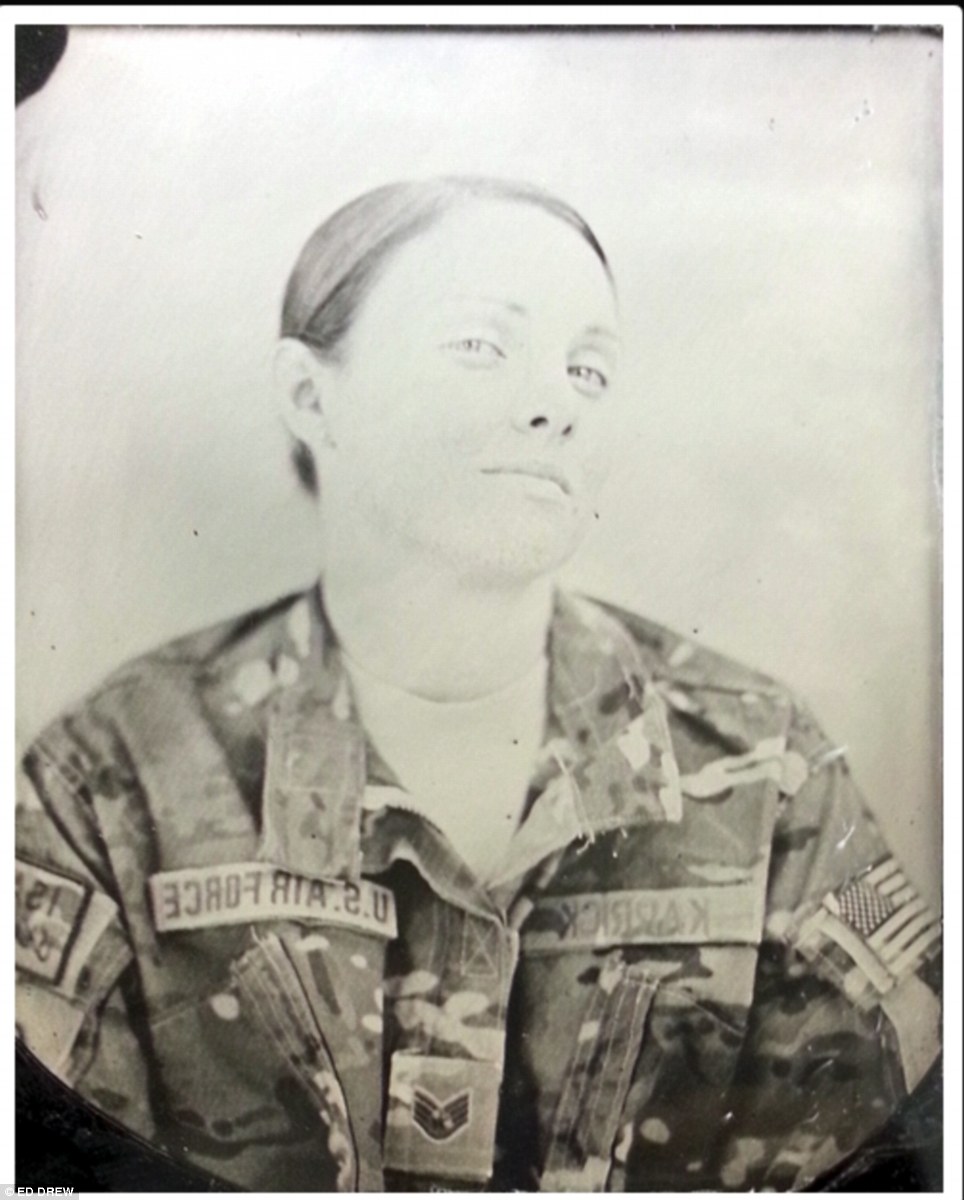 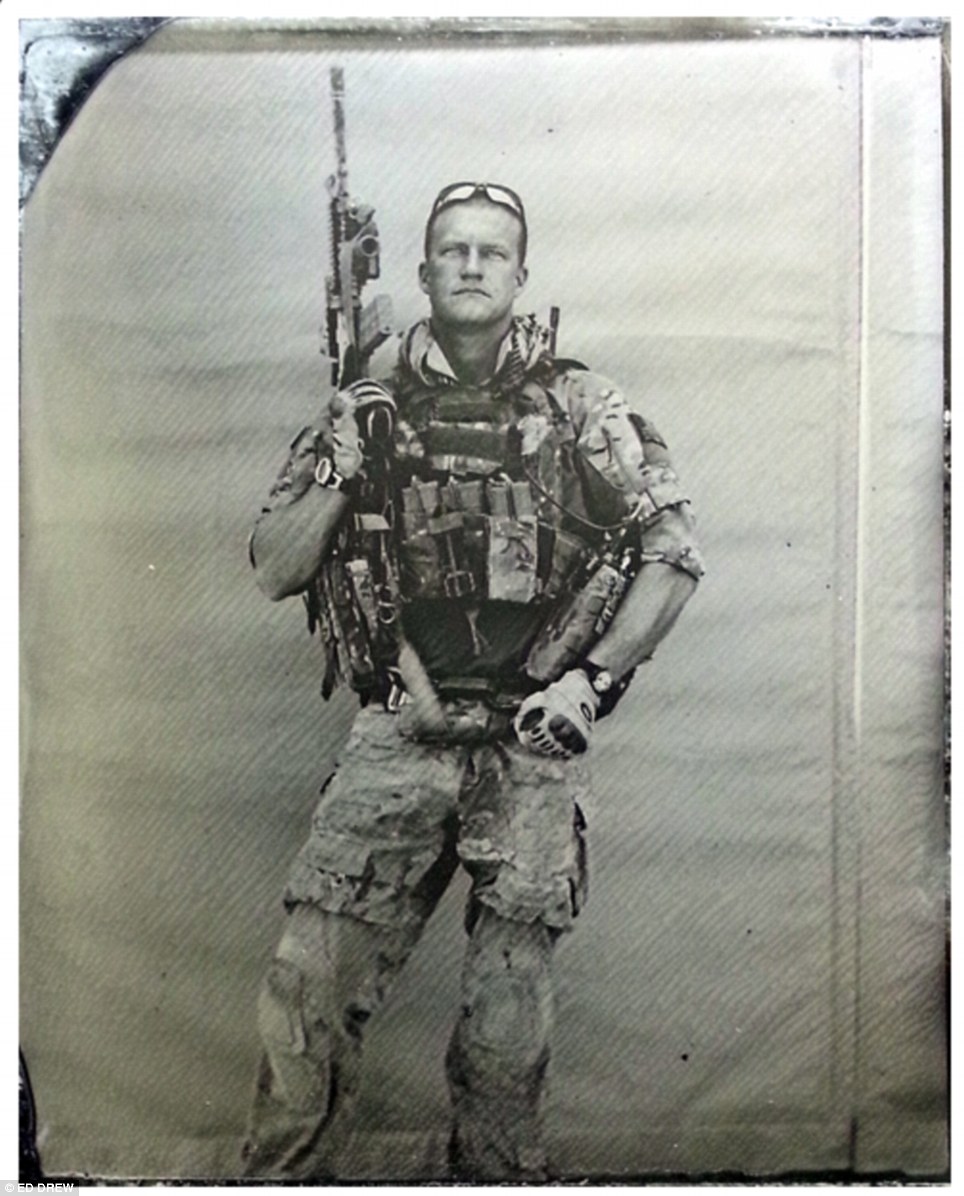 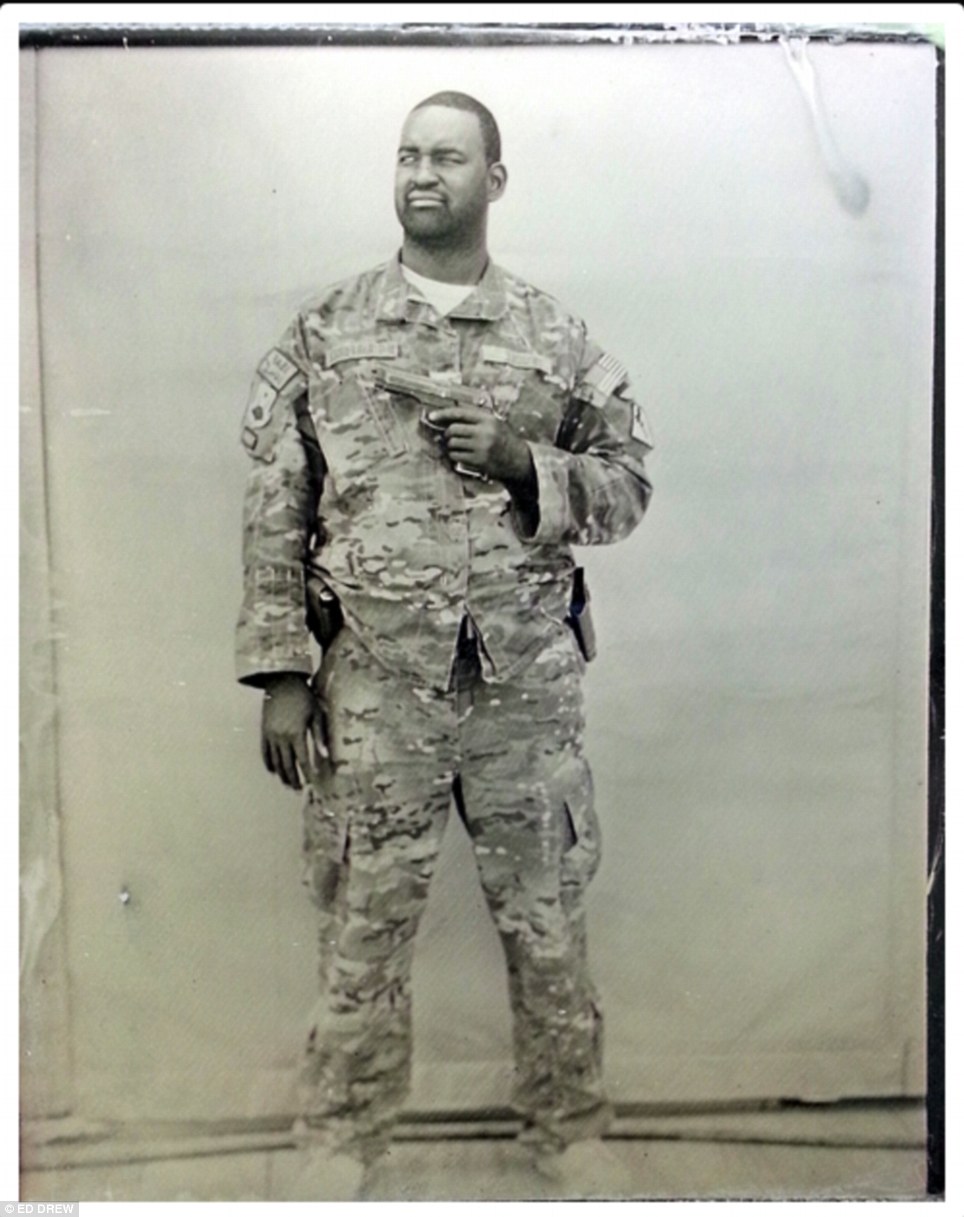 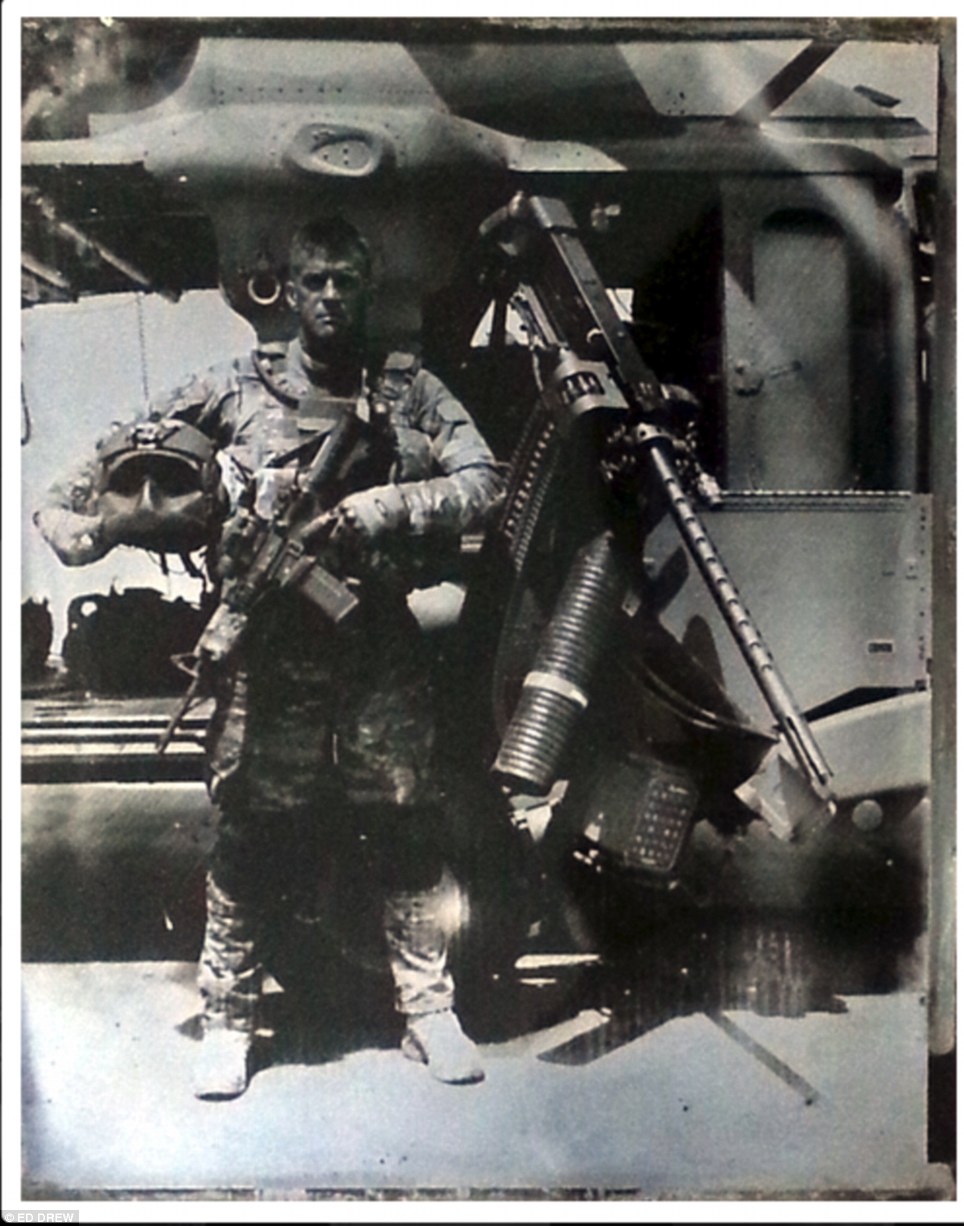 Drew said switching ‘thought process, from creative to  tactical’ was difficult, as he had to make sure he maintained his ‘situational  awareness’ 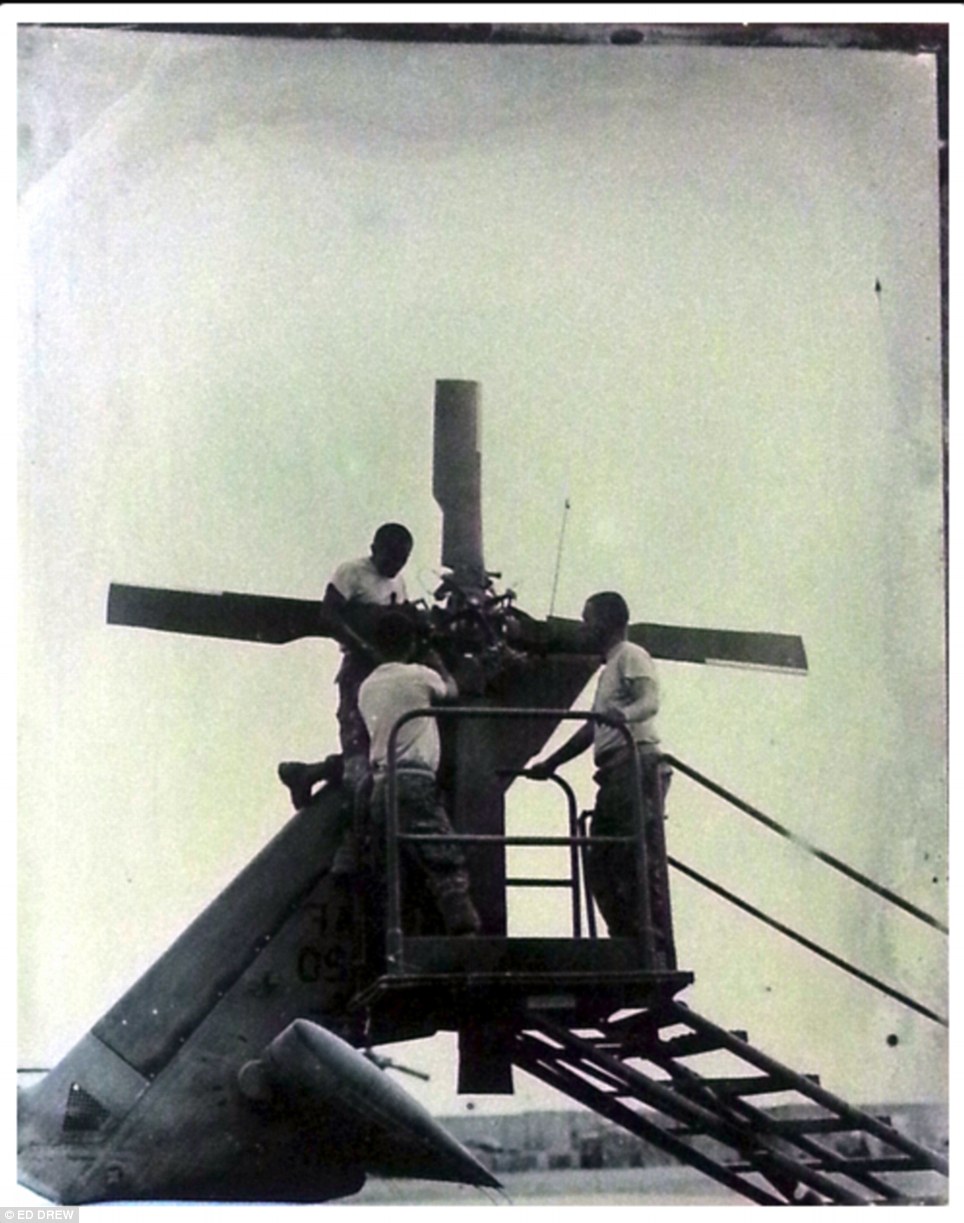 For Drew, the photos helped him to document his ‘life in  the aftermath of my deployment’