Nasa’s advanced ion propulsion rocket engine has run continuously for over five and a half years, setting a new world record.

This makes it the longest test duration any kind of space propulsion system demonstration project ever.

The solar-electric propulsion thruster could be used in a wide range of science missions including intriguing journeys into deep space.

The thruster is part of the space agency’s Evolutionary Xenon Thruster (NEXT) project at its Glenn Research Center in Cleveland. 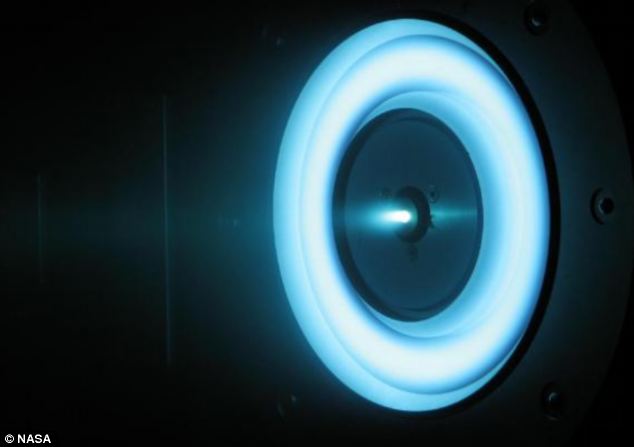 Nasa’s advanced ion propulsion rocket engine could be used for deep space science missons. It has been running continuously for over five and a half years to set a new record for the longest test duration of any space propulsion system demonstration

The project aims to develop a next-generation electric propulsion system, including power processing, propellant management and other components.

Despite setting a new record by operating for more than 48,000 hours, the long-running test will be shut down.

Michael J. Patterson, principal investigator for NEXT at Glenn, said: ‘We will voluntarily terminate this test at the end of this month, with the thruster fully operational.

‘Life and performance have exceeded the requirements for any anticipated science mission.’

The efficient engine is perfect for deep space missions. It is a type of solar-electric propulsion in which thruster systems use the electricity generated by the spacecraft’s solar panels to accelerate the xenon propellant to speeds of up to 90,000 mph.

This provides a dramatic improvement in performance compared to conventional chemical rocket engines. 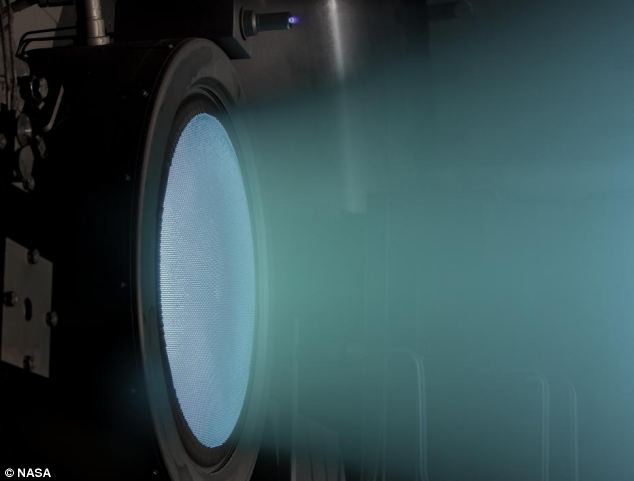 The engine has been running for over 48,000 hours. It is a type of solar electric propulsion in which thruster systems use the electricity generated by the spacecraft’s solar panel to accelerate the xenon propellant to speeds of up to 90,000 mph. The thrust beam is pictured

HOW THE ROCKET WORKS

During the endurance test, which was carried out in a high vacuum test chamber at Glenn Research Center, the engine consumed about 870 kilograms of xenon propellant.

While this sounds like a lot, it provides an amount of total impulse (a measure of the maximum momentum that an engine and fuel can move a vehicle) that would take more than 10,000 kilograms of conventional rocket propellant for the same use.

The test engine’s core ionization chamber was manufactured at Glenn Research Center, while the ion acceleration assembly was designed and built by Aerojet Rocketdyne in California.

The system could also be used to power Nasa’s Asteroid Initiative.

The imitative aims to find asteroids that are a potential threat to human populations on earth and potentially capture and redirect the most threatening asteroids. 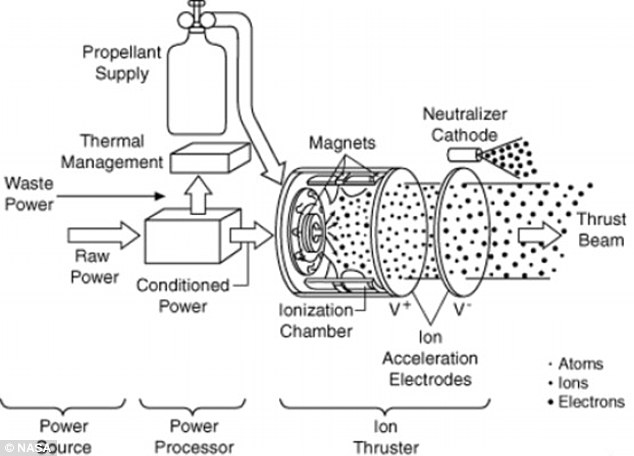 The solar-electric propulsion thruster uses a magnetic field to generate thrust by accelerating xenon ions and is powered by solar panels. While this type of engine cannot produce as much power as chemical rockets, it is perfect for deep space missions as it is more efficient