Nasa’s new Orion spacecraft made a ‘bull’s-eye’ splashdown in the Pacific today following a dramatic test flight that took it twice around Earth in 4.5 hours.

Cameras fitted to the rocket and capsule captured the entire mission – giving an unprecedented ‘Orion’s-eye’ view from inside the capsule that could on day take man to Mars. 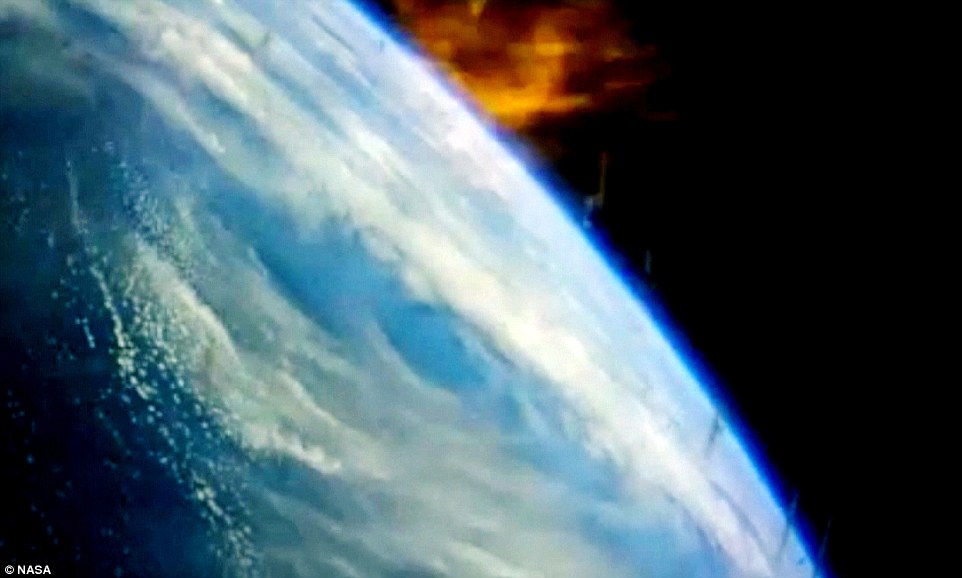 Looking home: Cameras onboard the Orion capsule took this stunning snap of the Earth during re-entry. Flames show the incredible heat the capsule was subjected to, as it hit speeds of 20,000 mph and weathered temperatures approaching 4,000 degrees Fahrenheit. 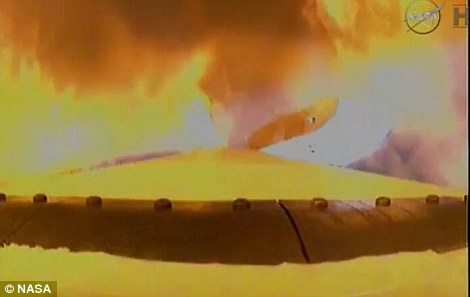 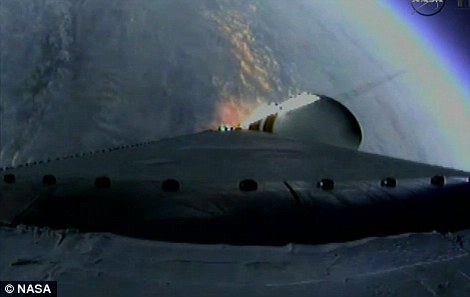 Cameras onboard Orion captured its entire mission, from blast off (left) to its climb into orbit (right)

END_OF_DOCUMENT_TOKEN_TO_BE_REPLACED

Rare photographs of the Beatles crossing Abbey Road shot for the cover of the last album they recorded together have sold for a staggering £180,000 ($281,000).

The six stills were rejected as possible covers of the Beatles’ famed Abbey Road album released in September 1969, just months before they split up.

They were taken by Scots photographer Iain Macmillan, a close friend of John Lennon, who balanced precariously on a ladder in the middle of the road in north London for the shoot. 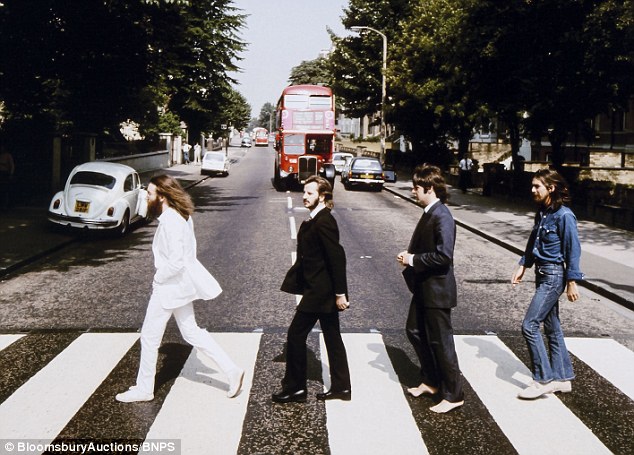 Familiar, yet unfamiliar:Rare photographs of the Beatles crossing Abbey Road shot for the cover of the last album they recorded together have sold for a whopping £180,000

END_OF_DOCUMENT_TOKEN_TO_BE_REPLACED

These haunting images reveal the battlefields of World War One as they look today – one hundred years after the fighting broke out.

The powerful and atmospheric shots were taken by photographer, Michael St Maur Sheil, who spent seven years on the project.

The collection, called Fields of Battle-Lands of Peace 14-18, form an open-air exhibition featuring 60 freestanding photographs, each measuring 1.2 metres (4ft) by 1.8 metres (5ft 10in). 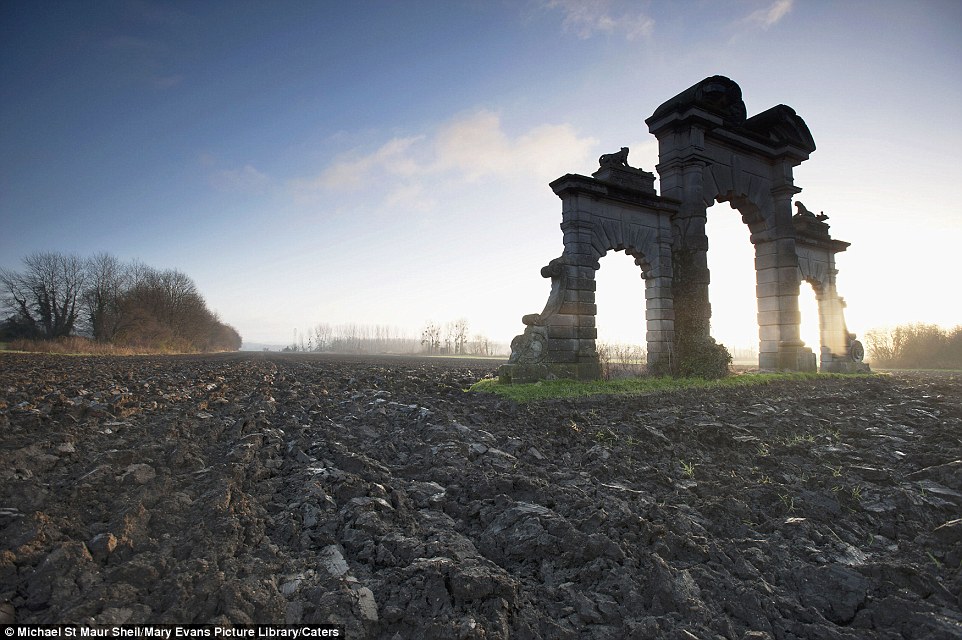 The reconstructed gateway of the Chateau de Soupir in northern France, which was badly destroyed during the war and subsequently demolished. The village of Soupir was devastated during the war, mainly due to the Second Battle of the Aisne. There are now five national cemeteries located in the small French village – two for France, and one each for Germany, the UK, and Italy

END_OF_DOCUMENT_TOKEN_TO_BE_REPLACED

Ed Drew is a staff sergeant in the California Air National Guard. He’s also an artist who taught himself to make tintypes, a type of photography last in vogue during the 1860s and 1870s. It’s an extremely difficult technique to master, but Drew is a gung–ho sort of chap, and thought nothing of heaving his cameras, chemicals, tripod and photographic plates into a suitcase, attaching it with a bungee cord to the case containing his flight gear, weapon and army clothing, and lugging both all the way from San Francisco to Helmand province, Afghanistan. The combined weight of the two cases was 80lb.

END_OF_DOCUMENT_TOKEN_TO_BE_REPLACED

Daredevil surfers are flocking to the coast of Portugal to ride giant waves up to 100-foot high.

Incredible photos show the thrill-seekers riding the huge swells off the coast of Nazare, a fishing town north of Lisbon.

A 125-mile long underwater canyon – which is up to three miles deep – combines with strong Atlantic currents to create the enormous waves. 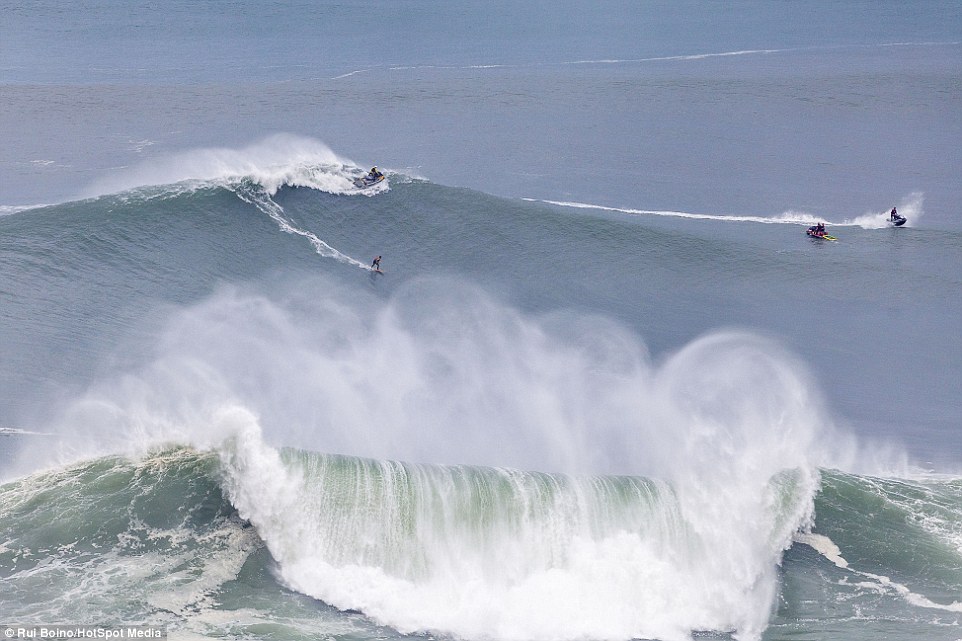 A deep underwater canyon and strong currents sweeping in from the Atlantic Ocean create huge, 100-metre waves off the coast of Nazare, Portugal at this time of year

END_OF_DOCUMENT_TOKEN_TO_BE_REPLACED

On June 6, 1944, The Allies launched the biggest seaborne invasion ever seen, Operation Overlord, as they attempted to overcome the Nazi juggernaut that had conquered most of mainland Europe.

That attack, and the battles that followed, would see some of the fiercest fighting of the Second World War brought to the coast and countryside of France.

Here an incredible set of photographs shows those battlefields as they were then, littered with burned out planes, wounded soldiers and destroyed buildings, and as they are now, packed with tourists, sunbathers, and beach huts.

Packed with landing craft, tanks, trucks, soldiers and anti-aircraft balloons, it is difficult to recognise the beach near Coleville-sur-Mer, code-named Omaha Beach, when it is set against its serene modern-day counterpart, home to nothing more than a few walkers and a caravan. 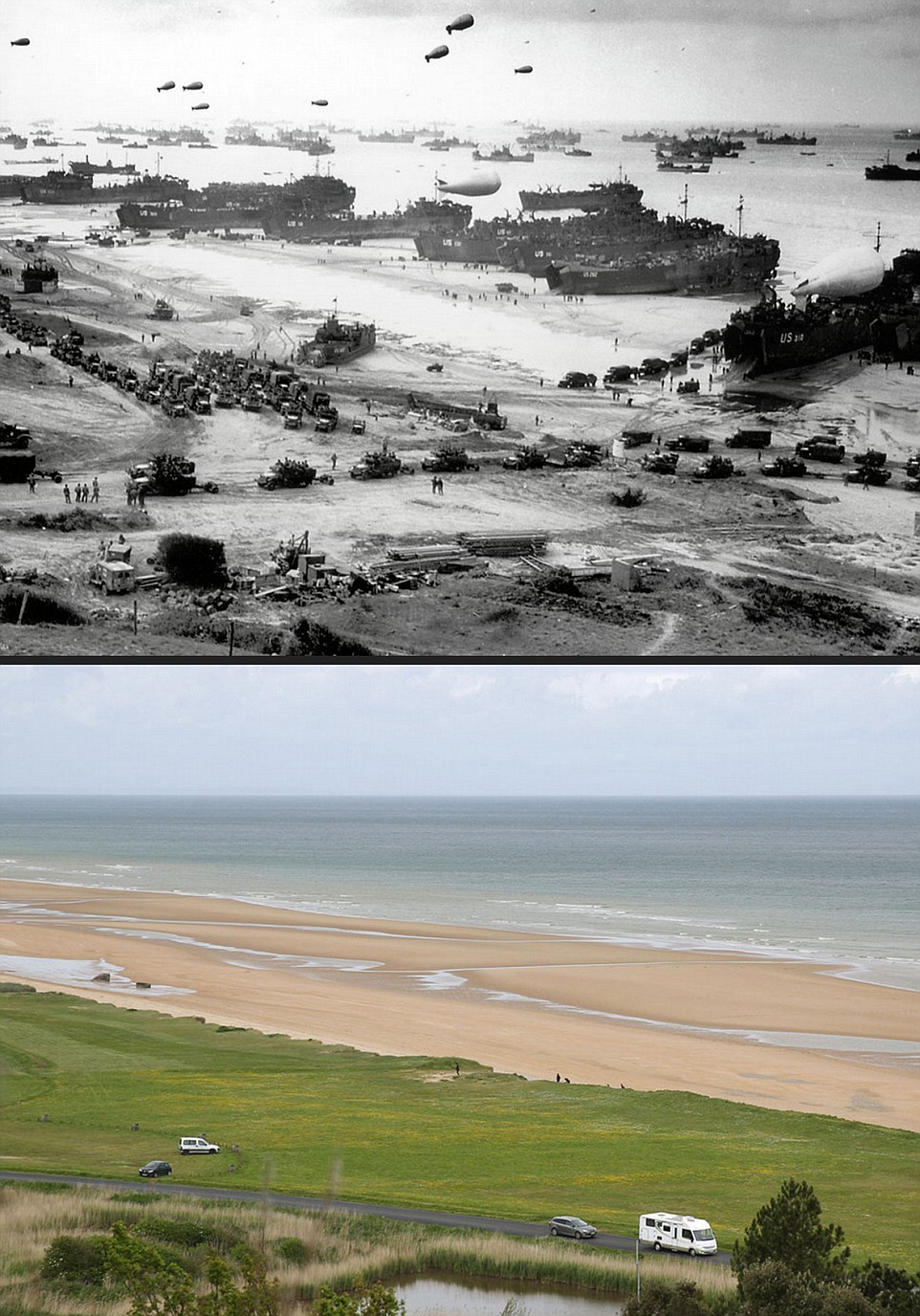 The invasion: U.S. craft of all shapes and sizes crowd onto Omaha Beach on June 6, 1944 (top), to disgorge troops and equipment during the first stages of the Allied counter-attack, the greatest seaborne invasion in history. Bottom: 70 years on in May this year, the beach near Colleville-sur-Mer is a haven of peace

END_OF_DOCUMENT_TOKEN_TO_BE_REPLACED

The photographs are included in ‘The Making of Gone with the Wind’ by Steve Wilson, to celebrate the film’s seventy-fifth anniversary. The book will be published in September.

Extras are also photographed in Civil War costumes in between takes on the film’s large sets.The film’s director, Victor Fleming, is also captured speaking to actors before famous scenes in the film.

Photographs included in the book also show the burning of Atlanta, which reportedly took only took a little over an hour to film.

Also included are industry memos regarding casting African-American actors in the film and the rumor mill over which Hollywood stars would be cast as Scarlett and her leading man Rhett Butler – a role which ultimately went to Gable.

The photographs, archives of producer David O. Selznick and business partner John Hay Whitney, are part of the Harry Ransom Center at the University of Texas at Austin. They will be exhibited from September 9, 2014 through January 4, 2015 at the Center. 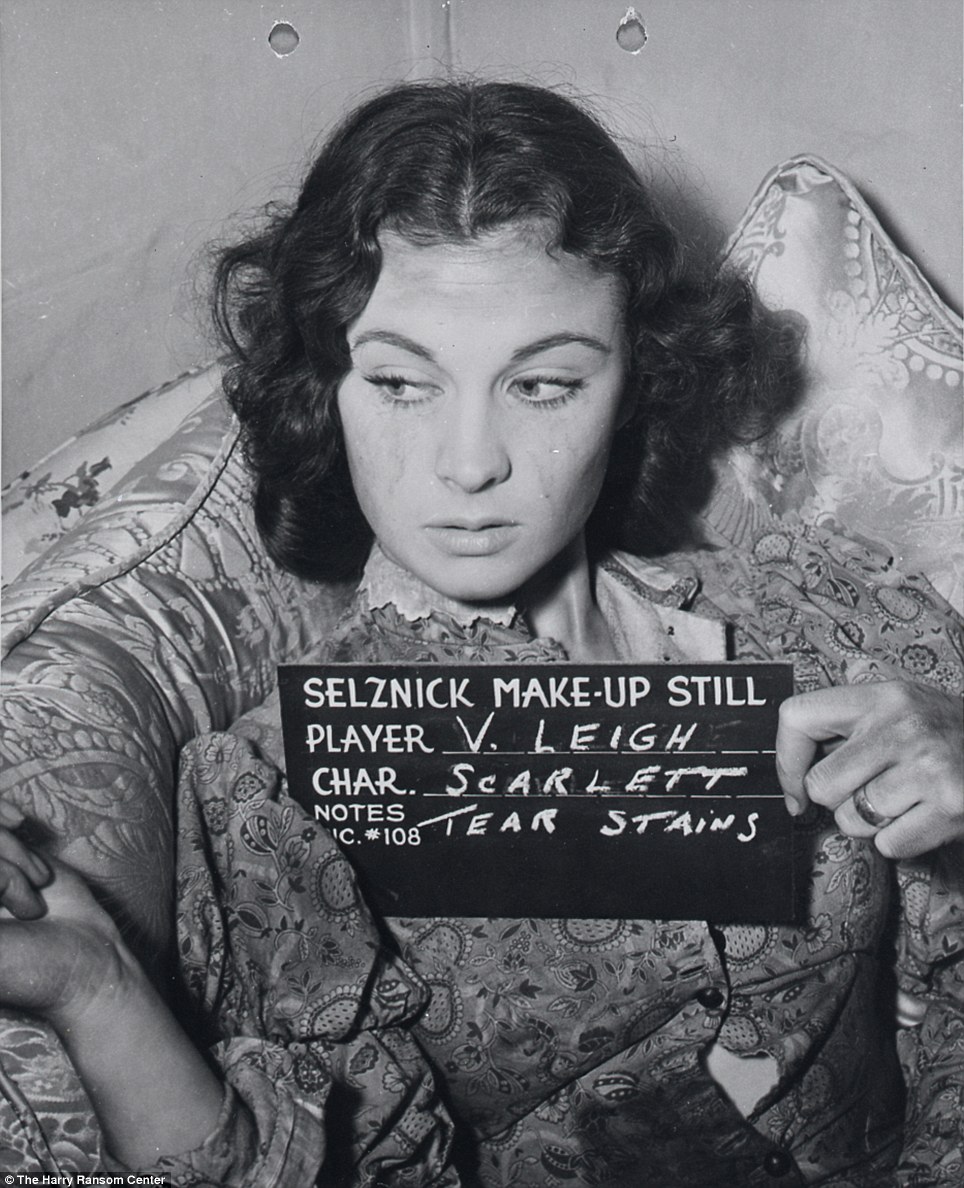 END_OF_DOCUMENT_TOKEN_TO_BE_REPLACED

Nestled in cracks and crevices in coral reefs off the Indonesian coast, so-called disco clams are busy putting on a light show. But unlike many animals in the ocean that produce their own light, a new study finds that these flashy mollusks catch and reflect ambient light for their displays. END_OF_DOCUMENT_TOKEN_TO_BE_REPLACED

Travelers looking for an adventure might need to think outside the box – and choose destinations that are literally abandoned.

A list compiled by Smithsonian.com includes seventeen abandoned locations around the globe.

The deserted locales include industrial facilities, amusement parks, military sites and even small villages and cities. 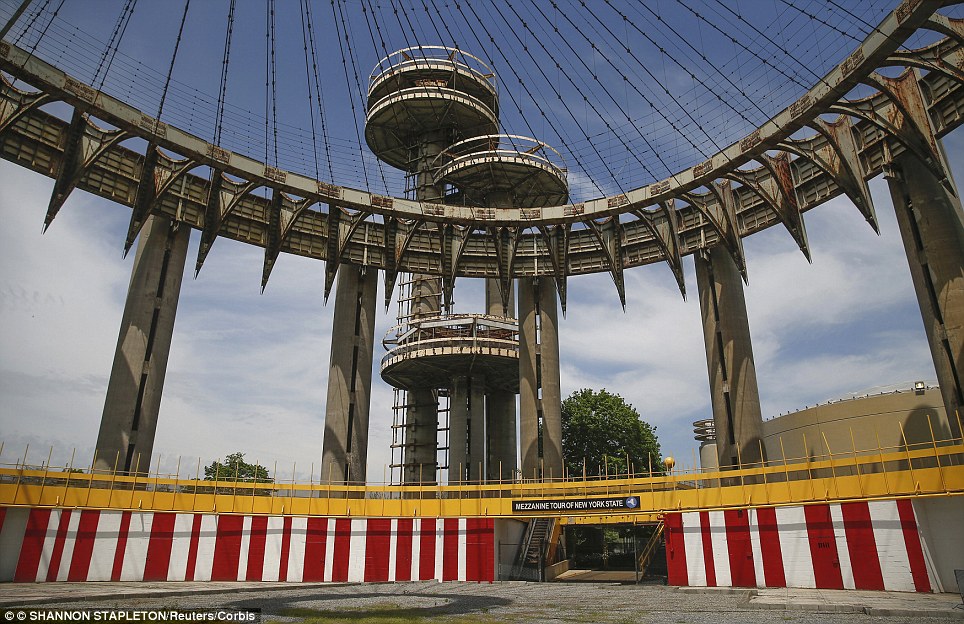 Massive: The New York State Pavilion, one of the last architectural vestiges of 1964 World’s Fair, is seen at Flushing Meadows-Corona Park in Queens, New York

END_OF_DOCUMENT_TOKEN_TO_BE_REPLACED

As far as divers are concerned, crashing into a coral reef was the best thing that could have happened to cargo ship the Giannis D.

The 87 meter-long vessel went down after hitting the Shaab Abu Nuhas Reef on April 22 1983 and has since transformed into an underwater playground for diving enthusiasts.

Underwater photographer Andrey Nekrasov, 42, ventured the 24m down to examine the beautiful, broken hull and was impressed by the condition it’s maintained during its second life.

‘This is a great, well-preserved ship,’ Nekrasov said. ‘There are a lot of great items still on board – a trumpet, a winch, a ladder and the masts. All this has become overgrown with coral and the ship has acquired quite a mystical appearance.’

The softwood cargo of the Greek ship, which had sailed out of Rijeka in Croatia, was destined for the Saudi Arabian Port of Jeddah, with the remainder to be off-loaded at Hodeidah on the coast of Yemen.

But With the captain in his cabin for the night, the ship’s crew couldn’t navigate around the corner of the reef while getting up to the top speed of 14mph.

The hull was destroyed when the entire back half of the ship separated from the front half leaving the the forsaken wreck to now lie in three severed parts – the bows, amidships and stern.

Once the Giannis D had struck the coral reef, the crew abandoned the listing ship.

An Egyptian tug attempted to salvage the wreck, but it was eventually declared a loss and the ship was consigned to the depths.

The wreck of Giannis D has long been popular with scuba divers who are attracted to the size of the wreck and the clear water which has a visibility of up to 27 metres. 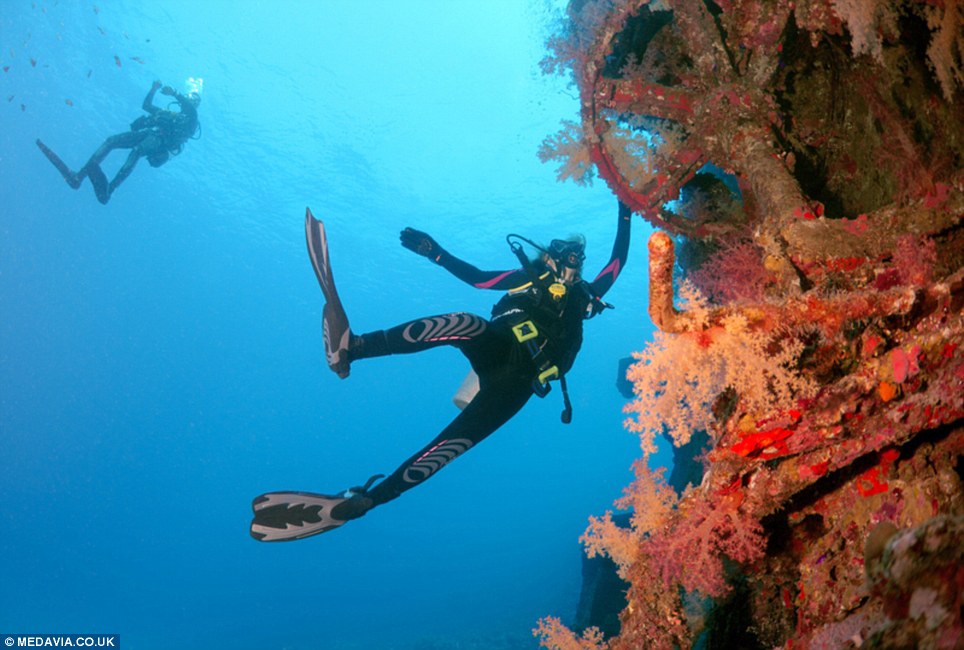 What a wreck: The Greek cargo ship, Giannis D, has become an underwater wonderland for divers in the stunningly clear Red Sea