The constant drumbeat of government officials, both President and Congress, is to act. To push forward – to use the office to get things done. Yet one unsung hero in history bucked the system. President Calvin Coolidge used his time as president to do less, not more. And by doing less, Silent Cal did more to help America than almost any other president, even Reagan.

‘Don’t do this yourself… you would be an  idiot.’

With that friendly warning, the ‘Slow Mo’  team launches a Molotov Cocktail at the side of a typical house in  suburbia.

And thanks to their super slow motion capture – which can take a staggering 2,500 frames a second – we can see every moment of  this explosive and destructive attack in the kind of detail normally reserved  for Hollywood action films.

Gavin Free and Daniel Gruchy, AKA the Slow Mo  team, have a track record for this sort of thing , having previously smashed  watermelons, popped popcorn, and dropped water balloons, all in the name of  science and fun.

This time, it is the side of a house which  falls victim to their destructive ways.

Scroll  down for video: 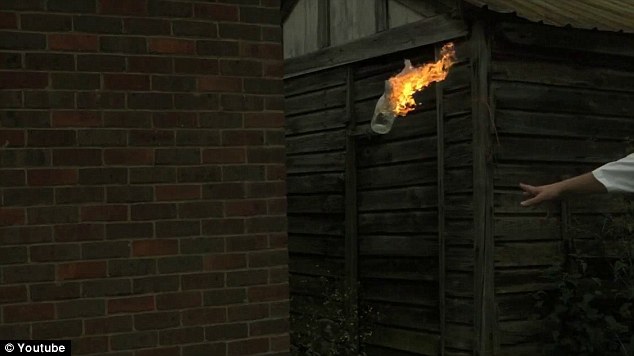 Get ready for the explosion: The Molotov flies through  the air – in super-slow motion – as the Slo Mo team take great glee in educating  their viewers 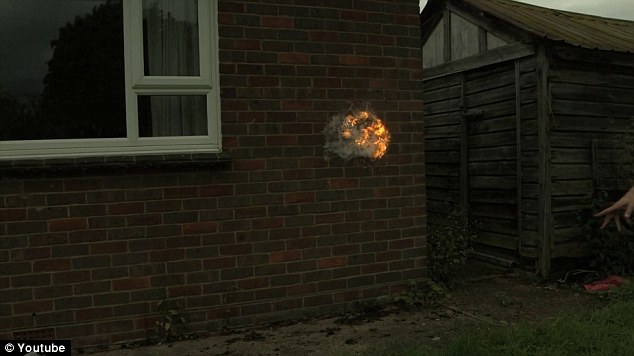 As the molotov cocktail hits the wall, the glass  shatteers and the fuel begins to spread 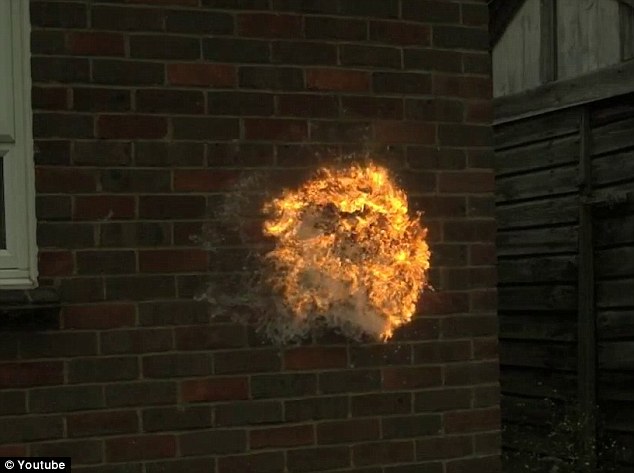 It’s time to burn! As the flames spread out, more and  more fuel catches alight, leading to a blossoming flame 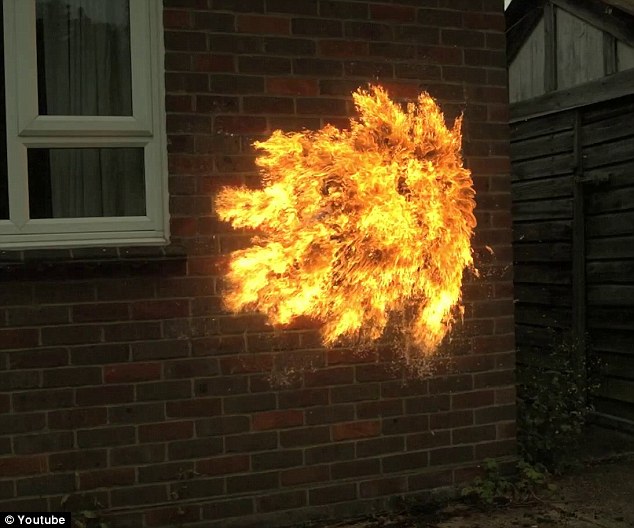 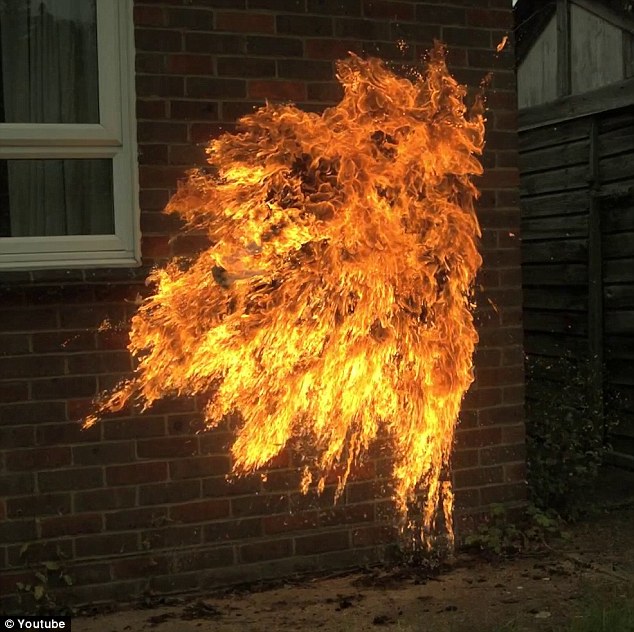 The burning liquid spreads down the side of the house –  on slow-motion is looks spectacular, if savage 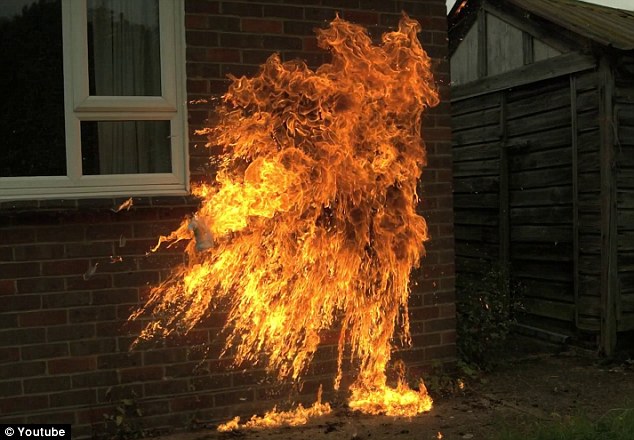 As the liquid drops down, the flames lick across the  floor, burning as it goes 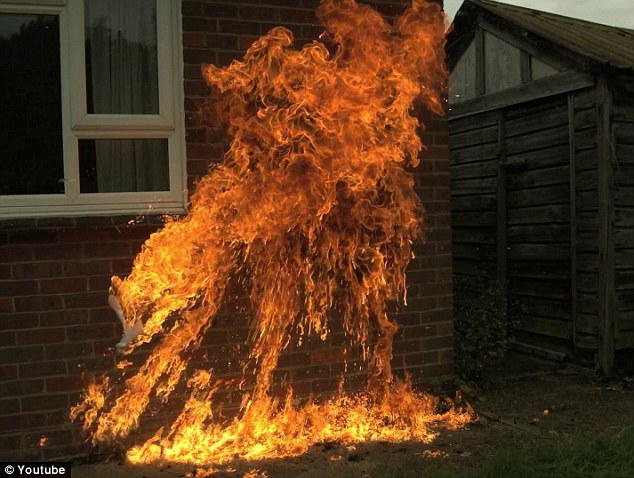 The flames ‘drip’ down the wall as the liquid burns.  This whole sequence has lasted around a second, with the bottle not even landing  by the time of this final image

The Slow Mo team have millions of subscribers  to their YouTube channel and more than 60,000 Twitter followers.

Hollywood director Michael Bay – known and  lampooned for his high-octane super-slow-motion scenes in action films such as  Transformers – may well end up jealous of the pair’s camera.

They used a Phantom Flex camera to record the  action, which provided them with high-definition footage to keep for  posterity.

The video is part of a series of slow-motion  videos, more than 60 in total, posted by the pair on their YouTube  video. 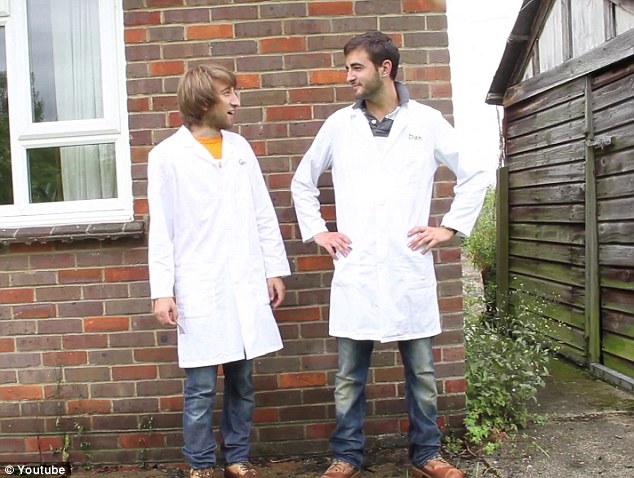 What did we just do? Gavin Free (left) and Daniel Gruchy  (right) enjoy blowing things up in the name of science

Previously they have tackled a  computer with  a sledgehammer, played golf with an apple, and exploded  ‘bottle-bombs’,  capturing each moment at a fraction of the pace of real  life.

The pair do not go to lengths to  explain  their motivations or what the audience is witnessing. Instead they seem to enjoy nothing more than watching everyday objects explode in super slow motion.

But that is part of the beauty of  science –  sometimes there doesn’t need to be a reason, other than watching life from a new perspective.

The following is a perfect example of the so-called tolerant left that are actually the most intolerant hatemongers. There can be no other viewpoint or diversity of thought. This is not a homosexual vs hetrosexual issue. It is a free speech issue. Does a citizen have the right to speak out or not? To some, evidently not.

Tea Party founder Rick Santelli has a knack for explaining things that anyone can understand. This one’s no different:

Meet Elke. This inspiring woman was born in Hitler’s Germany and lived under communist rule for years before becoming an American citizen.

Her video explanation of what happened in Germany under communism and the parallels to our current administration and the path we are on will give you a chill.