“Scientists shouldn’t try to manipulate the public by hiding the truth.”

Dr. Marty Makary, a professor at the renowned Johns Hopkins School of Medicine, on Friday sent shockwaves through the medical community in a Wall Street Journal piece headlined, “We’ll Have Herd Immunity by April.”

“There is reason to think the country is racing toward an extremely low level of infection,” Makary writes. “As more people have been infected, most of whom have mild or no symptoms, there are fewer Americans left to be infected. At the current trajectory, I expect Covid will be mostly gone by April, allowing Americans to resume normal life.”

END_OF_DOCUMENT_TOKEN_TO_BE_REPLACED

When will it end? When will the planet-killing pandemic dubbed COVID-19 ever end? If the Democrats have anything to say about – not for a while.

Not until they’ve wrung every ounce of control over you and me they possibly can, while strategically setting compulsory precedents for the next concocted or at least overblown emergency.

I like the DC Comic’s movie “Aquaman.” It’s a silly action/fantasy film that’s fun to watch without having to turn your brain on.

In the movie, Aquaman, as a teenager, is learning how to fight. He’s being taught by his mentor, who has put him through a series of tests. For years the kid has asked his mentor when he can finally go see his mother. And each time, the mentor answers, “when you’re ready.” END_OF_DOCUMENT_TOKEN_TO_BE_REPLACED

Something rather remarkable has occurred just recently regarding the Chinese/Wuhan coronavirus. And yes, I said it. Go ahead and call me a racist if you wish.

A treatment has been developed that shows promise at stopping the virus in virtually all patients for whom it’s been administered.

Early tests suggest that it can stop the virus from being contagious in just six days, with little to no side effects.

This is a huge breakthrough that’s happened in no time flat.

I stress that this appears effective as a treatment. It is not a vaccine, but if it’s as effective as advertised, it will buy the time needed to develop one.

Professor Didier Raoult from infection hospital l’Institut Hospitalo-Universitaire (IHU) Méditerranée Infection in Marseille, France, said that, “the first COVID-19 patients he had treated with the drug chloroquine had seen a rapid and effective speeding up of their healing process, and a sharp decrease in the amount of time they remained contagious.” END_OF_DOCUMENT_TOKEN_TO_BE_REPLACED

Will anti-Semites, like those in the “Squad,” reject a COVID-19 vaccine if it is developed by Israel?

Regarding the coronavirus, as things improve in China, things will likely worsen in America. However, they are not likely to get as bad as it is in others countries, like Italy.

But we have to be careful about comparisons. The effects of this virus are apparently amplified in the elderly and those with pre-existing health issues.

What isn’t widely publicized is that Italy’s median age is much higher than other European nations, thus it is being hit much harder than nations with younger overall populations.

That being said, the reason why things are improving in China while worsening in the U.S. and elsewhere is the timeline. END_OF_DOCUMENT_TOKEN_TO_BE_REPLACED

Israeli scientists: ‘In a few weeks, we will have coronavirus vaccine’

Once the vaccine is developed, it will take at least 90 days to complete the regulatory process and potentially more to enter the marketplace.

Israeli scientists are on the cusp of developing the first vaccine against the novel coronavirus, according to Science and Technology Minister Ofir Akunis. If all goes as planned, the vaccine could be ready within a few weeks and available in 90 days, according to a release. END_OF_DOCUMENT_TOKEN_TO_BE_REPLACED

END_OF_DOCUMENT_TOKEN_TO_BE_REPLACED

A jab that uses electricity to blast its way into immune system cells could revolutionize the treatment of asthma.

The ‘supercharged’ vaccine enables the immune system to overcome dust mite allergy – one of the leading triggers of asthma attacks.

The attacks are triggered by the immune system overreacting to the droppings of the tiny bugs, and releasing the chemical histamine.

It is this rush of histamine that leads to swelling and irritation of the airways, causing breathing difficulties and asthma attacks.

The current ‘vaccine’ against asthma is immunotherapy, where the patient receives multiple injections of small amounts of the harmful dust mite protein.

The idea is that the immune system becomes used to the protein, so no longer overreacts.

This exposure also triggers the production of helper cells, which dampen down this overreaction. However, the treatment can be lengthy, and involves 50 to 80 injections over as long as five years.

As an alternative, scientists have developed vaccines that, rather than containing the actual dust mite protein, contain tiny amounts of the protein’s DNA.

This tiny exposure allows the immune system to acclimatise to the protein and produce helper cells. This confers protection in just one injection, rather than many.

However, all cells are covered by a protective layer, called the plasma membrane. Previous vaccines have struggled to get through this shield.

The electric vaccine, however, could be the solution. Scientists at Chulalongkorn University in Bangkok, Thailand, injected mice with dust mite allergies with a DNA vaccine immediately after firing electrical pulses through the skin.

The results, published in the journal Immunology Letters, showed helper cell levels were 40 times higher after an electric jab than a conventional one. 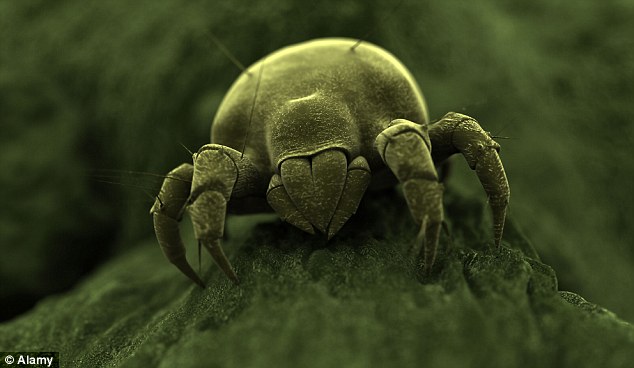 Mite-y powerful: The ‘supercharged’ vaccine enables the immune system to overcome the dust mite allergy – one of the leading triggers of asthma attacks

The team are confident the technology will work on humans. Malayka Rahman, research officer at Asthma UK, says: ‘Nine out of ten people with asthma tell us dust triggers their symptoms, increasing their risk of asthma attack.

‘However, dust is notoriously difficult to avoid. Although this research is an important step forward towards more effective vaccines, it is in its early stages.’