The closing of multiple embassies in so many countries is a sad commentary on the security of the United States.

Questions and comments abound as others and I examine the situation over the last few days.

The United States has 294 embassies around the globe. There are at least 27 in the Middle East and North Africa. Do we really need 294 embassies? After all, they are established to develop and maintain mutually beneficial relations between two countries.

They are placed in various countries to promote American interests in that particular region. At least that’s the diplomatic line of crap.

So again, do we really need 294 of them? No, of course not. My guess is that at least some if not most are just fronts for the CIA and like Benghazi, are bases for gun-running or other nefarious activities.

Seems to me they are mostly a waste of taxpayer dollars. Countries, other than ours, will almost always act in their own self-interest, whether or not we have an embassy to try to influence them.

These embassies in the Middle East are a mystery, if one is to trust the government to only maintain the embassy for it’s stated purpose. What good have they ever done?

As I stated, an embassy is supposed to be set up to further diplomatic ties and positive relations between countries. Other than Israel, we have no legitimate relationship with any of them, other than presenting an easier target. They don’t have to fly all they way over here to kill Americans.

Now, regarding the newest terror threat to so many embassies: It seems awfully coincidental and impeccably timed that amid calls to drastically curtail NSA spying, we receive intelligence of a major threat.

Although, after donning my conspiracy tin foil hat, it occurred to me that this “dire” situation could be a win-win for “The One”.

If after all the terrorist “chatter” (more than pre-9/11, you know) leading up to the these closings nothing happens, Obama will be made to look like the prudent, thoughtful and decisive leader we all knew him to be. He prevented a potential catastrophe when al-Qaeda then saw no point in the attack.

If there is an attack he, along with his sycophantic media, will point the ever-growing need for even more spying and intelligence gathering by the NSA.

Back to reality. Let’s think about this. Which is worse – that they know of a massive threat from an organization that Obama claimed had been decimated or that all these resources have been squandered on NSA facilities and infrastructure and they still don’t really know squat. Check that. They know who Aunt Ethel called last week (but they didn’t listen).

The closing of so many embassies leads one to think they know very little. They claim the attack could occur over here, no wait, over there, maybe over there. I would liken it to NOAA tracking a hurricane and first claiming the storm will hit Florida, no wait, Mississippi or maybe North Carolina, or maybe Texas. Oh the heck with it. Let’s just evacuate the whole south.

Maybe if they spent more time and resources on actual intelligence instead of Muslim outreach and spying on Aunt Ethel they might be able to narrow their scope a bit and develop some real actionable intelligence.

The Great Sphinx and the pyramids of Giza are now the  target of a radical Salafist jihadist leader.

Murgan Salem al-Gohary, 50, an Islamist  leader twice-sentenced under former President Hosni Mubarak for advocating violence, told Egyptian media that the  historical landmarks are ‘idolatrous’ and must be destroyed.

The threats are being taken seriously as ten years ago Gohary helped smash a pair of giant Buddha statues in Afghanistan.

Egyptian newspaper al-Masry al-Youm said Gohary is a jihadist leader with  links to the Taliban, reported the Jerusalem Post.

‘The idols and statutes that fill Egypt must  be destroyed. Muslims are  tasked with applying the teachings of Islam and  removing these idols,  just like we did in Afghanistan when we smashed the  Buddha statues,’  Gohary said in a Saturday night television interview,  according to  al-Masry al-Youm.

His comments came a day after thousands of Islamists gathered in Tahrir Square to call for the strict application of Sharia law in the new constitution.

He is issuing the same call as supreme Taliban leader Mullah Mohammed Omar did in 2001 when he issued an edict against un-Islamic graven images, which means all idolatrous images of  humans and animals. 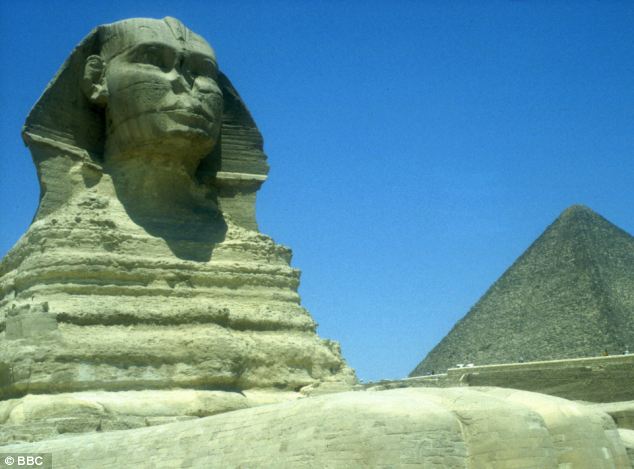 As a result, the Taliban destroyed all ancient sculptures, using explosives, tanks, and anti-aircraft weapons blew apart a pair of giant Buddhas in Bamiyan Province, 230 kilometers (150 miles) from the capital of Kabul.

‘He was sentenced twice, one of the two sentences being life imprisonment. He subsequently fled Egypt to Afghanistan, where he was badly injured in the American  invasion.

‘In 2007, he traveled from Pakistan to  Syria, which then handed him over to Egypt. After Mubarak’s fall in early 2011, he was released from prison by a judicial ruling,’ the  newspaper added. 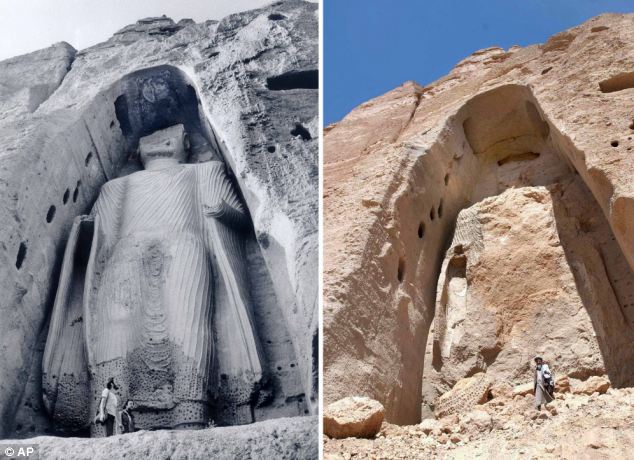 Destruction: His threats are being taken seriously as  ten years ago Gohary helped smash a pair of giant Buddha statues in  Afghanistan 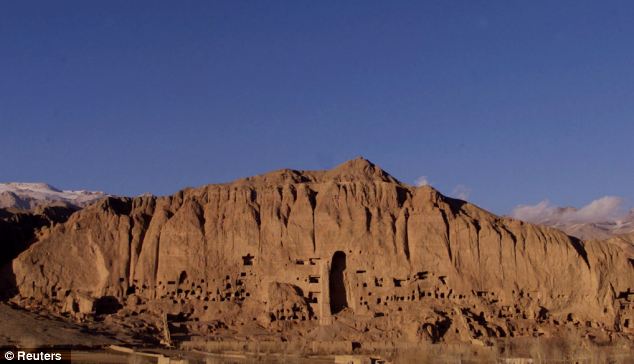 Missing: A general view of the alcoves where giant  Buddha statues once stood in Bamiyan in 2001 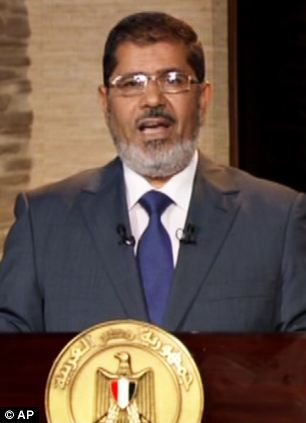 The Great Sphinx outside Cairo, which has the  head of a pharaoh and the body of a lion, was built soon after the first pyramid – around 4,500 years ago.

Close to the Sphinx are the three  pyramids of Giza, the largest of which is known as the Great Pyramid and is one of the  Seven Wonders of the Ancient World.

The pyramids are a source of national income and they bring tourists to Egypt so the Egyptian Interior Ministry source said officials are taking the threats seriously.

According to al-Masry al-Youm, authorities have taken the ‘taken the necessary  precautions to prevent violations of the law or any abuses of  anything in the public domain or archaeological treasures including the  pyramids.’

Egypt’s Coalition to Support Tourism are now worried that his threats will deter tourists from visiting the landmarks.

CST leader Ihab el-Badry told Egyptian  daily  al-Ahram that the group planned to sue President Mohamed Morsi and other government leaders for their ‘lack of response’ to Gohary’s threats.

The country has already suffered a decrease in tourism – last year sombre pictures  showed rows of empty seats at the Light and Sound Show, below the  historic pyramids in Cairo.

Only a year earlier the show had been fully-booked every night.

Dozens of tourists cooed as they watched the landmarks change to shades of purple, green, red and blue among others. Vast beams of light were shot into the air by high-tech  lasers.

Egypt had been on the verge of its own economic revolution, with booming tourism and impressive developments of apartments, offices and flats around the country.

But this revolution went no further. In its place were the scenes of violence and mass protest in Tahrir Square in February which became known as the  ‘Arab Spring’. 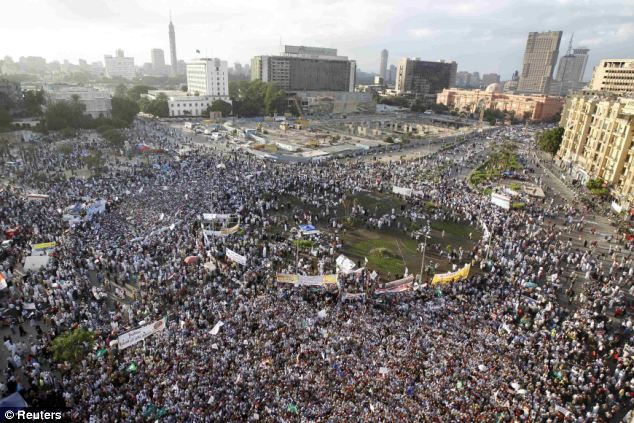 Affect: Egypts Coalition to Support Tourism are now  worried that his threats will deter tourists from visiting the landmarks – since  the Arab Spring tourism has fallen

In Saudi Arabia the ancient Islamic holy landmarks of Mecca and Medina are under threat.

According to media reports, £690million worth of construction work is beginning on the Masjid an-Nabawi in Madinah, where the Prophet Mohammed is buried.

Under the proposed plans the site will be developed to include a mosque with a capacity for 1.6 million worshippers.

The house of one of Mohammed’s wives has already been destroyed to make space for public toilets.

The city of Medina, Islam’s second holiest place is under threat as there is now a plan to pull down three 7th-century mosques.

The Washington-based Gulf Institute estimates  that 95 per cent of Mecca’s millennium-old buildings have been demolished in the past two decades alone.