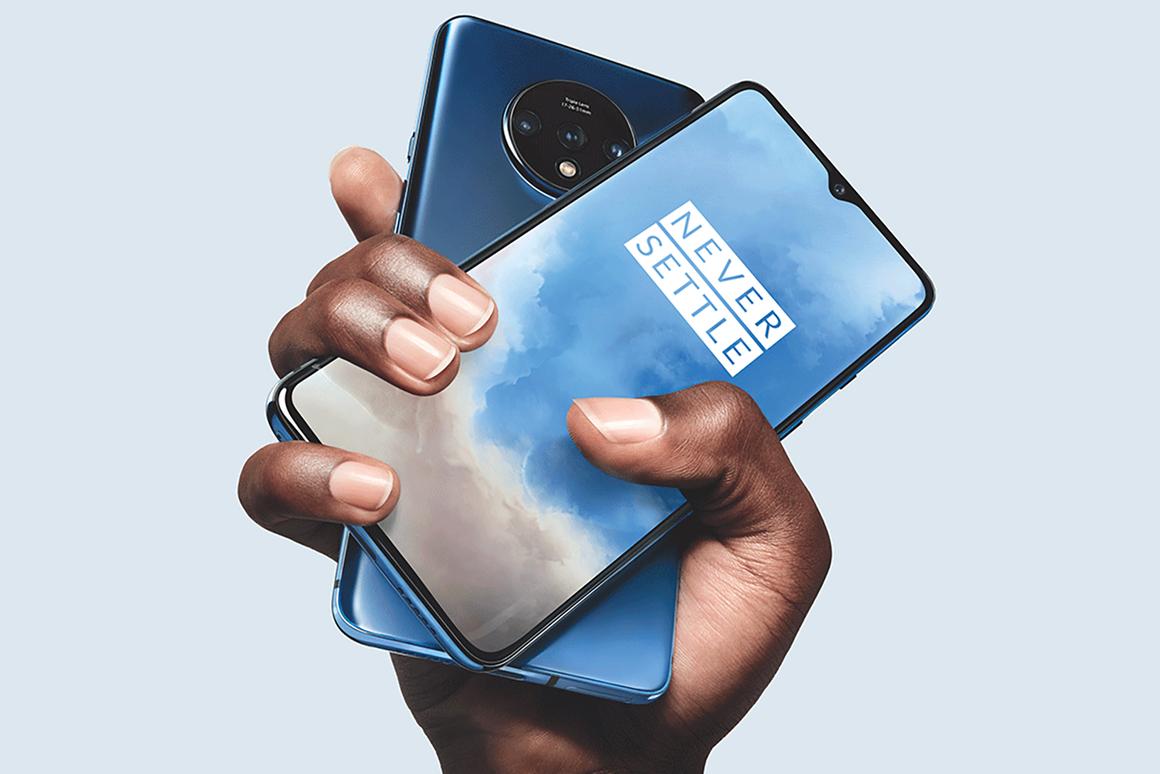 As expected, OnePlus has unveiled the OnePlus 7T at a special media event, a solid upgrade over the OnePlus 7 phone it launched back in May. For those who don’t want to spend big on the OnePlus 7 Pro, the mid-range option is now even more compelling. END_OF_DOCUMENT_TOKEN_TO_BE_REPLACED

Just a few weeks ago Samsung unveiled the Galaxy A7, kitted out with four cameras. Not to be outdone, LG has now upped the stakes with a new premium phone that’s almost more camera than phone. The LG V40 ThinQ sports no less than five lenses – two in the front and three in the back – bringing with it a bevy of new photography tricks and good internal specs to boot. Oh, and the company has a new watch too. END_OF_DOCUMENT_TOKEN_TO_BE_REPLACED

Comedian Louis C.K. did something not have. When presented with accusations of sexual misconduct and overall lewd behavior, he admitted that all the accusation were true. That’s astounding considering that the other Hollywood dirtbags are either denying or just running away. I explore this phenomenon.

A television program called the Orville is created, written and stars comedian Seth MacFarlane. It’s like Star Trek with some comedy. One episode was particularly fascinating as it dealt with democracy. Not democracy as many Americans think, but true democracy – as in mob rule. Only this time the mob all have smart phones. END_OF_DOCUMENT_TOKEN_TO_BE_REPLACED

With the promising potential brought about by wearables, especially in terms of assisting digital health, many consumers are considering purchasing this new form of technology. Among the different kinds of wearable devices, the smartwatch is set to be one of the frontrunners due to it offering mobile functionalities and health sensors which will appeal to a lot of consumers. A study by Gartner released late last year showed that 50% of people who plan to purchase wearables will likely opt for smartwatches over fitness bands.

However, many are still considering whether it’s the right time to buy a wearable or just stick with their trusty smartphones for the time being. In this article, we’ll try to help you make the right decision on whether you should buy a wearable gadget soon, or if you should save your money for the next innovative release in the tech world.

Smartphone apps are just as accurate
Based on research published by Penn Medicine, smartphone applications were tested and found to be as accurate in delivering health data as

wearables. The research was said to address the common challenges in using and purchasing the technology – but how accurate is it in monitoring health? The study concluded that today’s health applications for smart handsets are just as accurate in calculating and presenting real-time data to its users as smartwatches and fitness bands. END_OF_DOCUMENT_TOKEN_TO_BE_REPLACED

The iPhone is to face its biggest challenge for supremacy in the smartphone market this week with the launch of the new Samsung Galaxy.

In what has been described as the most eagerly awaiting technology release of the year, the Galaxy S4 will be unveiled in New York on Wednesday and rumors are the device will feature eye control.

The S4’s predecessor, the S3, already had a feature called Smart Stay that detected if users were looking at the screen. 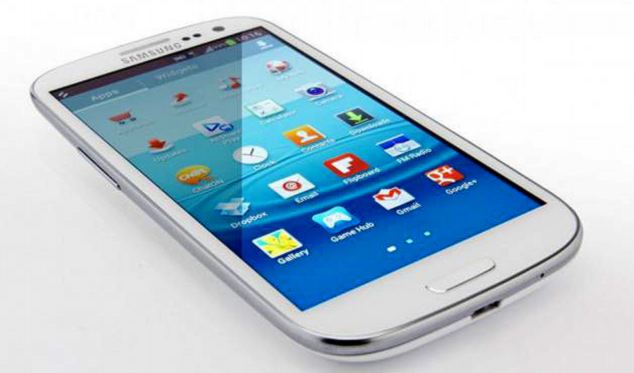 But the S4 is expected to have revolutionary functions such as ‘eye pause’ and ‘eye scroll’, which will let users scroll around apps and websites simply by moving their eyes.

Since its launch last year, the S3 briefly outsold the iPhone 4S but after the release of the iPhone 5, Apple have regained the top spot.

However, the S4 is predicted to become the biggest seller when it hits the stores in a few weeks thanks to rumored technological improvements such as wireless charging,

It is also expected to be powered by an eight core processing chip, compared to the iPhone’s two, and to have a larger screen – 5in compared to 4.8in on the S3. 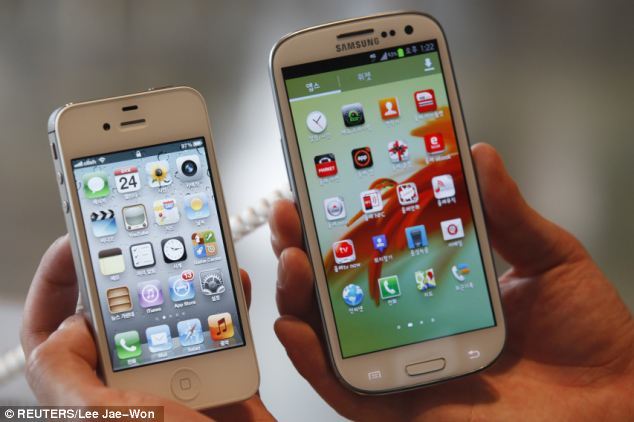 There was fierce competition between Apple’s  iPhone 4s, left, and Samsung’s Galaxy S III, right, last year as the battle  between the two technology companies continues

Other leaks suggest it will have a 13  megapixel camera, as opposed to the iPhone’s eight.

Francisco Jeronimo, from technology analysis firm IDC, said: ‘Apple is not the one leading the market. I wouldn’t be surprised if the new Samsung device sells more than the new Apple device over the next two years.’

The S4’s launch ceremony will be held at the famous Radio City music Hall and will be broadcast live in Times Square.

South Korean electronics giant Samsung have released a few teaser advertisements for the phone, which show a boy’s face being lit up by a golden glow as he opens a box containing the S4, with the catchline ‘one of the most amazing products to hit the market since TVs went  color.’

If you’ve only just got used to talking to your phone, get ready for a major change.

IBM has revealed its predictions for the computer we will all be using in 2018 – and it believes they will have all five senses, and will communicate with us in radically different ways.

‘Infrared and haptic technologies will enable a smart phone’s touchscreen technology and vibration capabilities to simulate  the physical sensation of touching something,’ the firm said. 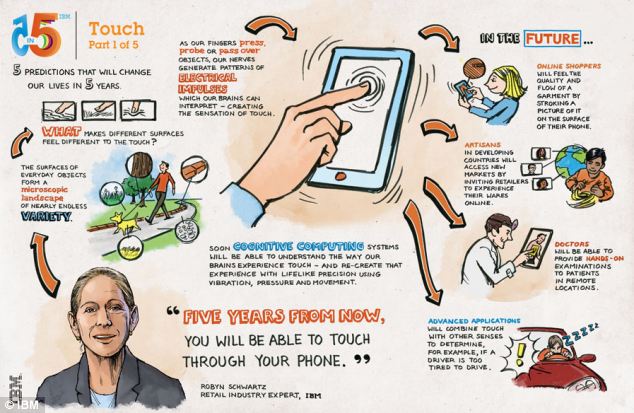 ‘So you could experience the silkiness of  that catalog’s Egyptian cotton sheets instead of just relying on some copywriter to convince you.

‘It’s amazing when you look back over the 60+  years of the computing revolution and see how far we have come in such a relatively short time,’ said IBM’s Bernard Meyerso.

Then came the mainframe, the PC, the Internet  and social networking.

Today, we’re entering the era of cognitive  computing–machines that help us think.’

‘One of the most intriguing aspects of this shift is our ability to give machines some of the capabilities of the right side of the human brain.

‘New technologies make it possible for machines to mimic and augment the senses. ‘

Today, we see the beginnings of sensing machines in self-parking cars and biometric security–and the future is wide open. 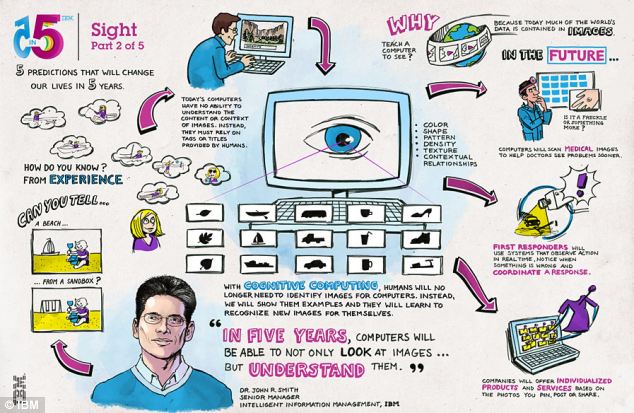 The firm claims in five years machines will be able to  see, and understand, images

‘These five predictions show how cognitive technologies can improve our lives, and they’re windows into a much bigger  landscape –the coming era of cognitive systems.

‘But the point isn’t to replicate human brains.

We humans are no slouches when it comes to procreation.

‘And this isn’t about replacing human thinking with machine thinking.

‘Once again; not necessary.

‘Rather, in the era of cognitive systems,  humans and machines will collaborate to produce better results–each bringing their own superior skills to the partnership.

‘The machines will be more rational and analytic. We’ll provide the judgment, empathy, morale compass and creativity.’ 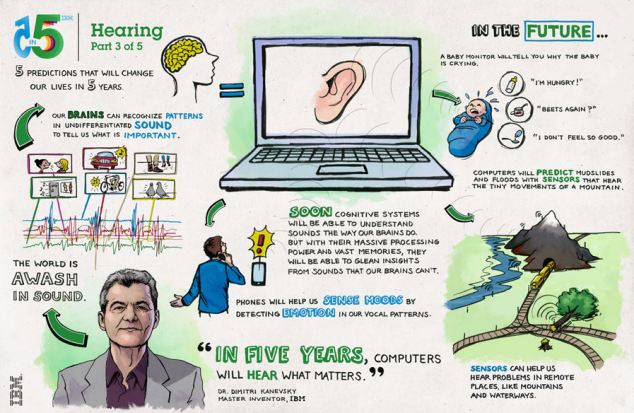 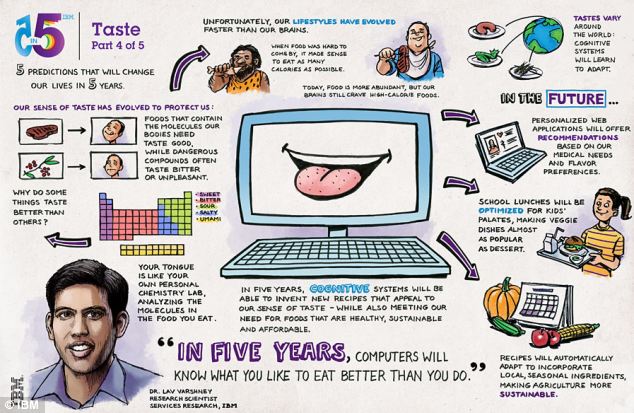 Computers will also be able to taste – and even predict  what food we like based on out eating habits. 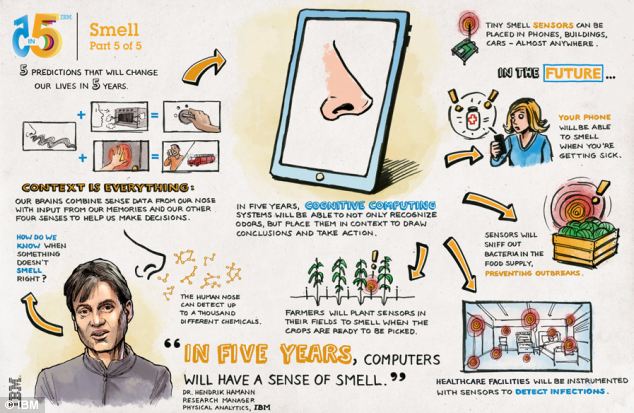