The US Population Crisis Will Be Worse Than We Thought

There is a real population crisis. Too few people are being born.

Back in 2008, when demographers projected trends and predicted the make  future age breakdowns of the population in the United States in the near future,  they calculated a rather grim outlook.

But now  it seems that their expectations were too optimistic. Birthrates in 49 out  of 50 states have been flat-lined or declining. The only exception was North  Dakota (which, in raw numbers, is minute compared to the deficit in other  states).

“The recession has had a drastic impact on US  birth rates, and there are also fewer immigrants. Both these things have brought  down population projections substantially, according to the latest population  projection from the Census Bureau. This has far-reaching implications for  already unwieldy programs such as Social Security, where fewer and fewer workers  will be tasked with paying for a comfortable retirement for Baby Boomers.”

There are other causes as well.

“Mark Mather of the Population Reference Bureau,  a research outfit, notes that couples have been getting married ever later in  life; in 2011 the median age at first marriage was 28.7 and 26.5 for men and  women respectively, the highest on record. A rising share of women in their  early 40s are childless. In this respect America may b

e following the experience  of Europe.”

It is amazing that we get admission like this from the government and even in  the mainstream news, and then it simply gets forgotten for a few years while we  hear massive amounts of propaganda about how bad it is that people all over the  world are having babies. This is especially insane since the United States, like  most other Western Nation-States, has taught citizens to depend on a pension  (Social Security) for retirement. How can that possibly work when the old  outnumber younger workers.

Worse, this sort of shift in customs is not easily reversible. Even if our  liberal culture would allow a policy that encouraged more children (which would  be a miracle by itself!), the evidence we have is that getting people to change  back to a previous generation’s form of behavior probably  won’t work. The government of Singapore got the idea it needed to 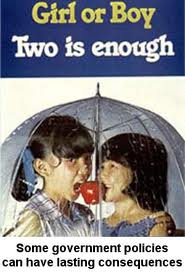 reduce  population, and started a program of propaganda, legal (perhaps even rewarded)  abortion, and financial and legal incentives to stop women from having as many  babies. They were so effective they realized they were destroying the country  and tried to reverse course with laws and incentives going the other way.

They didn’t work. As Jonathan Last wrote  in the Weekly Standard, “Despite all the incentives, all of the public  campaigns, all of the pleading, the average woman in Singapore can barely be  bothered to have a single child.”

As is true of its economy, the United States’ demographics look good compared  to Europe. But that is not worth feeling good about. We have depopulated  ourselves and we still won’t acknowledge how foolish we have been.