For the longest time I thought Sheila Jackson Lee (D-TX), or maybe Hank Johnson (D-GA) were the dumbest people in Congress. I starting to rethink that position the more Alexandria Ocasio-Cortez opens her mouth, and she’s not even in Congress yet. Here’s

These 14 presidents from works of fiction are each still more realistic a choice than the 2016 election cycle holds for us. Let’s take a look at these fictional commanders-in-chief.

For each of our “candidates,” I’ve given you a defining quote and a short summary of why they made us truly believe they could be presidents.

Do you ever wonder why nothing ever changes in Washington? It seems no matter who is President– Republican – Democrat – whomever – nothing changes.

Yet every four years we spent untold millions of dollars and thousands of hours promoting one candidate or another. But at the end of the day, no matter who is elected, things either get just a bit worse or a lot worse.

Same goes for Congress and the Senate. We expend so much time, effort and money electing these idiots and nothing gets better. Why is that?

Well, as usual, Mark Levin pointed to it just the other day on his radio program. It’s the bureaucracy and the judges. These faceless, nameless bureaucrats are immune from elections. Whether it’s a conservative or liberal president, it’s of no consequence to these bureaucrats.

It matters not to them who controls the House and Senate. They just continue on, pumping out more and more rules and regulations to choke us all and further their own influence.

It’s the same with federal judges. Mark cited the case of same-sex marriage. In every state, where the citizens were allowed to vote on it, they overwhelmingly affirmed marriage to be between one man and one woman. END_OF_DOCUMENT_TOKEN_TO_BE_REPLACED

A photograph of John Quincy Adams that he  described as ‘hideous’ is now venerated in history as one of the oldest  surviving photos of a U.S. president.

The photograph, taken during an uneventful  trip to New York in August of 1843, turned up in an antique store in the 1970s  and was bought for 50 cents.

It is now housed in the National Portrait  Gallery under the care of the Smithsonian. 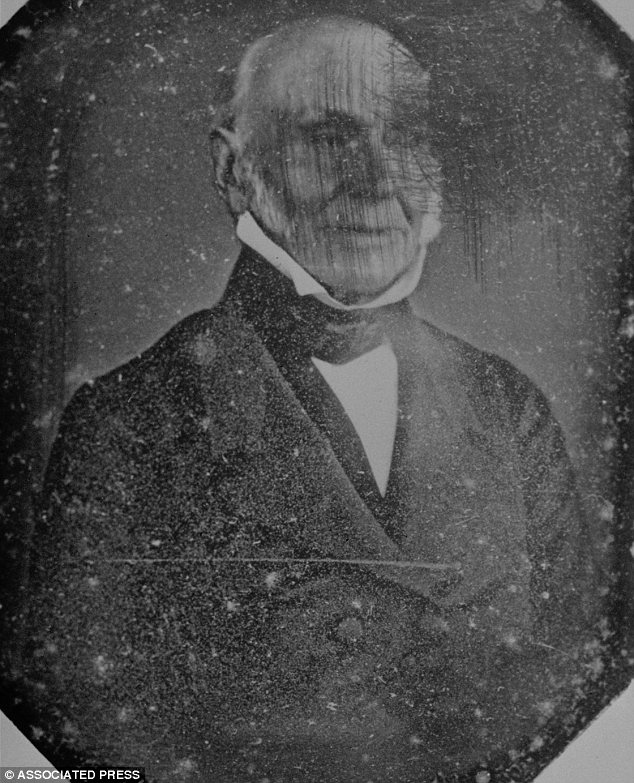 This picture of John Quincy Adams was bought for 50 cents in an antique shop. It was taken in 1843

Adams was the sixth president of the United  States, serving for four years between 1823 and 1829.

In a diary entry dated Aug. 1, 1843, Adams  described posing for the photograph during a visit to Utica Female Academy in  New York.

After he delivered a short speech, ‘The shaking of some hundred hands then followed and on my way returning to Mr. Johnson’s, I stopped and four daguerreotype likenesses of my head were taken, two of them jointly with the head of Mr. Bacon – all hideous.’

The daguerrotype was the machine that was used to take the photographs of Adams. 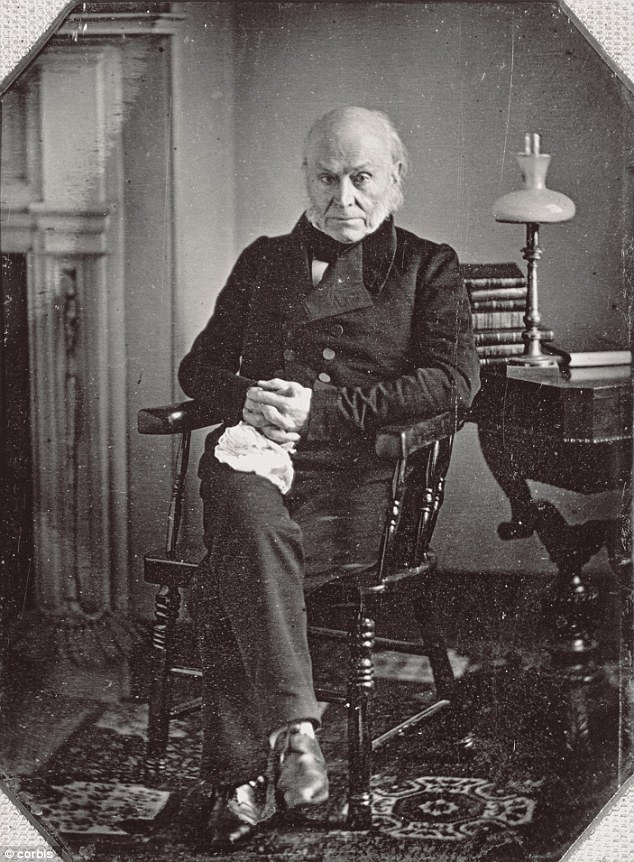 Another photograph was taken of Adams at home in Quincy,  Massachusetts, around the same time. Less is known about this photograph, except  that it was taken by Philip Haas

He was 76 at the time that the photograph was taken.

In addition to snapping some photos while in New York, Adams also called on an 11-year-old child dwarf  nicknamed General Tom Thumb, he wrote.

Another photograph was taken of Adams at home  in Quincy, Massachusetts, around the same time. Less is known about this  photograph, except that it was taken by Philip Haas.

A PORTRAIT,  AN EYE  INJURY AND A DWARF: A PAGE OF A PRESIDENT’S DIARY

Excerpts of John Quincy  Adams’ diary dated August 1, 1843:
At ten o clock the reception  [at Utica Female Academy] took place on a  stage erected in front of the Bleeker House, where Mr. Bacon addressed and  welcomed me in the name of the citizens of Utica. I answered him in a speech of  about half an hour, sufficiently cheered for my hopes or wishes, but of  mortifying inanity to myself.

The shaking of some hundred hands then  followed and on my way returning to Mr. Johnson’s, I stopped and four  daguerreotype likenesses of my head were taken, two of them jointly with the  head of Mr. Bacon — all hideous.

Then a visit to the dwarf C.F. Stratton,  called General Tom Thumb, eleven years old, twenty-five inches high, weighing  fifteen pounds, dressed in military uniform mimicking  Napoleon.
At Little Falls I was  addressed and welcomed by Arphaxad Loomis, an ex-member of the Twenty Sixth  Congress, whom I did not recognize till after I had answered.

…About an hour before we reached  Schenectady, the wind raised by the rapid motion of the car lodged on the ball  of my left eye, beneath the under lid, a small sharp-angled pebble, of the  entrance of which I was not conscious when it happened, but which fretted the  eye to torture, produced considerable inflammation, and made it impossible for  me to look in the face of those whom I was to address. A sumptuous dinner had  been prepared for us at Schenectady.

I was in anguish unutterable. I retired to a  private chamber and washed the eye in cold water without relief. Dr. Duane, who  had observed my suffering, followed me to the chamber, examined the eye,  discovered the offensive pebble, wiped it out with the corner of a towel, and I  was well.

As I stated in Part One, Barack Obama is not our first progressive president to fancy himself a supreme ruler.

It remains to be seen if Obama will supplant all predecessors as America’s worst president. He has the potential, but I believe Woodrow Wilson is still king of American fascist presidents.

During World War I Woodrow Wilson created the “Committee on Public Information (CPI)”. The wicked progressive and Wilson advisor Edward Bernays described the CPI as the “engineering of consent” and “the conscious manipulation of the organized habits and opinions of the masses.” Wilson, in the CPI, had created America’s first official government propaganda department, designed solely to control the population and manipulate their behavior.

One example of manipulation the CPI produced was a World War I liberty Bond poster that read: “I am Public Opinion. All men fear me! If you have money to buy and do not buy, I will make this No Man’s Land for you!” Now that’s not at all creepy, is it?

The CPI trained a group of almost 100,000 men to give four-minute propaganda speeches to any audience that would listen. They extolled the greatness of government and portrayed Woodrow Wilson as a larger-than-life leader. They also produced and released many government propaganda films. END_OF_DOCUMENT_TOKEN_TO_BE_REPLACED

I was recently speaking to a friend and fellow conservative. The conversation invariably turned to a discussion of “The One”. My friend was complaining of what a fascist dictator Obama is becoming. I had to laugh knowing that Obama has always been a fascist and it’s just becoming more obvious now. He spoke as if this were the first time in American history we have a president that fancies himself a dictator or King.

I gave my friend a quick synopsis of King Andrew Jackson. You may link to it here.  It was as if he hadn’t heard this, as if it were news to him, and he, I regard as someone who is a fairly well-rounded and knowledgeable conservative. He did understand, and I agree, that fascism is a product of the left, not the right as most are taught. The left, the progressives, like fascists are enamored with, and in fact worship the power and expansion of the state and absolute control of it.

There have actually been several “want to be” fascist leaders in America before the present. As bad as they all were, in my opinion, there has been none worse than president Thomas Woodrow Wilson, our 28th.

Barack Obama and Louis Michael Seidman have a few things in common:   they are both “progressive” leftists; they were both Constitutional Law professors; and they both want to get rid of the US Constitution. The difference is, the President probably wouldn’t just come out and admit it, but his actions indicate that he wants nothing more than to just scrap the entire document and declare himself dictator.

Seidman on the other hand wrote an op-ed in the New York Times with  the headline, “Let’s  Give Up on the Constitution.” His article makes the ridiculous claim that  the reason our country and government are in such disarray is not because our  elected leaders completely ignore the Constitution, but precisely because  they’ve been abiding by it for so long.  Continue Reading

The following video is for those people who think that Obama was sufficiently vetted before the 2008 election. Two media wizards of smart admitting on October 30, 2008 that they don’t know the man they both undoubtedly voted for and they didn’t do their jobs. That’s one week before the election!! None of the major media sources were the slightest bit interested in who he was or is. They still don’t care & nor does a lot of the public. He was black, therefore transformational. That’s all they cared about. Oh, and he was the senate’s most liberal democrat in the short time he was there. Let’s all vote for that guy. So he was raised and mentored by communists, hung out with marxists and radicals. Let me rephrase that; he sought out marxists & radicals with which to hang out . He was a druggy. What’s worse is, to this day, he has not had a “come to Jesus” moment. Where you realize what you thought was wrong, what you did was wrong, communists and radicals weren’t the people to be hanging out with or taking advice from. Doing all those drugs wasn’t very bright. Not one apology, no remorse. And all his records remain sealed. That’s vetted enough for me. How ’bout you?