Election season is heating up and here come the inevitable polls produced by leftist polling organizations, designed to demoralize conservatives.

I delve into the latest to show just how skewed one can make the results and why.

The CDC admits it has been posting incorrect Covid-19 numbers, yet what are we told?

We must listen to and believe the experts. But so far the so-called experts have not served us very well. And leftist journalists take advantage of it. END_OF_DOCUMENT_TOKEN_TO_BE_REPLACED

by: Philip Hodges at Political Outcast

There’s a German study that was published that will likely find its way to  U.S. Democrats and some Republicans. It claims to have found that people who pay  more taxes are happier than those who pay less.

The research spanned 26 years, during which time 25,000 Germans were asked  the question, “How satisfied are you with your life, all things considered?” The  demographics tied to each respondent’s answer were things such as income, age,  education and other variables. The research concluded that those who paid higher  taxes reported “higher levels of happiness.” The Wall Street Journal explored  reasons for such a phenomenon:

“One reason could be that people enjoy the public  goods and services made possible by taxes. For example, German households who  regularly attended cultural events such as concerts and plays, which are at  least partially publicly funded in Germany, were happier to pay taxes than ‘inactive’ households. Other possible factors include a sense that  redistributing wealth is necessary, altruism, and a measure of ‘tax morale,’ the  sense that there is a ‘moral obligation to pay taxes and if you don’t do it, you  might feel bad about it,’ co-author Sebastian Siegloch, a Ph.D. candidate at the  University of Cologne, said in an interview Wednesday.”

I can think of another possible reason. What’s that old saying? Ignorance is  bliss. If this study is truly representative of what people think in Germany,  that wealth redistribution is necessary, and paying more in taxes makes them  feel “altruistic,” that tells me they don’t know what they’re doing. They’re  happy living in socialism. Ignorant, but happy.

But, there’s something else. I think this “study” is completely stupid. I  imagine if these same panel of experts asked me how satisfied I was with my  life, all things considered, I would tell them “very satisfied.” Their question  doesn’t address whether or not I’m ok with our tax system. It just asks if I’m  happy. They’re two totally different things.

I can honestly say that I’m happier now than I was 4 years ago, and that’s in spite of Obama and in spite of taxes. There are many factors  affecting our level of “happiness,” and there are other sources of happiness. I  have a wife and kids and family and friends. I’m grateful knowing that I have a  place to live and can work a couple jobs. But that hardly means I’m ok with  wealth redistribution. It doesn’t mean that I think it’s selfless of me to allow  the government to take from me what it deems my “fair share.” I have no choice  in the matter.

There’s another facet here. Many in America are on some kind of  welfare:  government housing, government healthcare, food stamps, straight  welfare or all of the above. Many of them pay little or no taxes. I would guess  if they were posited the same question about being satisfied with their lives,  they would respond that they’re not satisfied.

Consider the worst case scenario:  living in a government house, getting  food stamps to buy smokes and liquor, receiving welfare checks every month, not  working, not paying taxes. If I were in that situation, I would completely  miserable, and I wouldn’t be paying any taxes. Then this “study” would confirm  that those that paid little or no taxes were not happy with their lives,  suggesting that the converse was also true.

The study is stupid, but I wouldn’t be surprised if politicians and media  started referring to it to justify more socialism.

Comment by the Common Constitutionalist:I agree that is the most ridiculous study I’ve seen in quite some time and so obviously political. Phillip is absolutely correct in his assessment of the study; it means nothing and the conclusion was reached before the study began, no doubt.

I have developed my own new happiness study. It would consist of 2 simple questions and be remarkably accurate.

Question 1: Are you generally happy? Most would answer in the affirmative.

Question 2: Have you ever seen a penquin, either in person, a photograph, or other representation thereof? Most would also answer yes.

Conclusion: People who have seen a penguin are generally happy.

[Editorial Comment: As you read the poll results, keep this in mind. Anyone who knows polling, understands that results of “Households” or “Americans” or “Adults”, are always drastically skewed to the left. It is not until you get results from equal numbers of “Very Likely Voters” that things are portrayed more equitably.

If the results of a general poll are this bad, you can bet the house, they are really a lot worse.]

When it comes to how Americans view President Obama going into the new year, there appears to be very little spirit of Auld Lang Syne. Instead, according to the new Washington Whispers poll, many voters aren’t forgetting what they dislike about Obama and want him out of office.

In our New Year’s poll, when asked what news event they fear most about 2012, Americans by a margin of two-to-one said Obama’s reelection.

Next to Obama’s reelection, 31 percent of Americans said they feared higher taxes, which may be proof that the president’s focus on the payroll tax cut has hit pay dirt.

The poll, however, held out some hope for Obama. Some 38 percent of younger Americans, 18-24, said their biggest fear was higher taxes. Just 28 percent of those same voters said they feared Obama winning in November.

But in results backed up by other polls, older Americans and those earning $75,000 or more are especially worried about the president getting a second term, according to the poll done by Synovate eNation.

Nearly half of Americans 65 and older said Obama’s reelection was their top fear, 39 percent of those making $75,000 or more agreed.

As we enter the presidential election year of 2012, what potential news event do you fear the most? 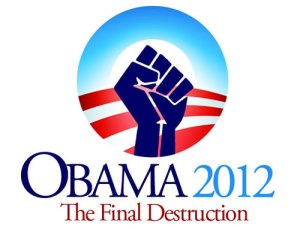 Iran will get a nuclear weapon 16%