The latest poll provides confirmation of what everyone in Iowa is talking about — former Pennsylvania Senator Rick Santorum’s timely surge.

Last weeks game no longer matters. You make it into the playoffs and you have a shot at the Superbowl. Iowa is the Wild Card game. Win, place well, or go home.

If Santorum does as well as the polls are now showing, he could provide the voters with something they haven’t had as yet — an articulate, socially 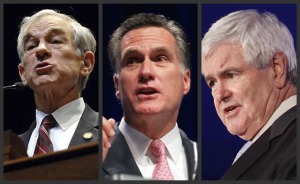 conservative opponent who isn’t a moderate, a progressive or a cranky old man and has a picture-perfect family life to rival Romney’s.

He can’t be painted as a Washington insider despite the 12 years he spent there as a Senator. Why? Because he wasn’t a “deal” maker. He spent his time pushing conservative causes. Santorum sponsored the partial birth abortion bill, championed welfare reform and Federalist Society-approved judicial appointments. He’s a hawk on defense, favors lower tax rates and wears his faith proudly. What’s not to like?

Up until now, people questioned if he could win, citing his devastating Senatorial reelection loss by 18% in 2006. What they don’t account for, in 2006,

is the overall animosity toward overspending republicans & the “throw them all out” mentality. Santorum simply got swept up with the trash. It was beyond his control. He has had a difficult time raising money & garnering support because of it.

He has also been unfairly tagged with the moniker that he is just the “Social Conservative”. His conservative stance on fiscal issues, defense, gun rights, the repeal of Obamacare, etc., has been overshadowed by his social conservatism.

Republican strategist Mike Murphy predicted on Dec. 29. “He can keep rising, could even catch Mitt.”

Given the expectations in Iowa, Santorum need only make it into the same sentence with frontrunners Romney and Texas Representative Ron Paul, whose cranky, conspiracy-prone and isolationist views should not carry him far beyond Iowa.

More recent good news for Santorum is that Rick Perry just launched a negative radio ad this week in Iowa, specifically targeting Santorum. One doesn’t waste funds on a commercial attacking a loser.

Santorum is so confident of emerging from the pile in Iowa that he just committed money for television ads in New Hampshire, which votes on Jan. 10.

Just a few days ago I wrote an election update stating Santorum’s bid could be over. Things are, shall I say, quite fluid.