from the Clarion Project:

Democrat presumptive nominee for president Joe Biden announced that he would restore U.S. funding to the Palestinian Authority (PA) if elected.

I have to say that I’ve really tried my darndest to support the President. I’ve congratulated him on his accomplishments and have even held back (well mostly) at blasting him when he appears to fail. Mostly because a lot of his supposed failings come from having to compromise with the lazy, shiftless Republican cowards in Congress.

But foreign policy is a President’s purview. Unlike the domestic side, the President is to be the tip of the spear when dealing with other nations. So far Trump has done a pretty good job, refriending Israel, meeting with the Chinese leader and taking a much harder line on Syria, Russia and North Korea.

But then he goes and invites Palestinian President Mahmoud Abbas to the White House. Like Abbas is some sort of real President. That’s a hot one. He’s simply the latest Palestinian head terror facilitator. In that respect, he’s no different than was Iraqi dictator Saddam Hussein, who paid terrorists and their families.

In 2002, Fox News reported, “In Tulkarm, one of the poorest towns on the West Bank, a member of the Palestinian Legislative Council handed out the checks [totaling $25,000 each] from Saddam. END_OF_DOCUMENT_TOKEN_TO_BE_REPLACED

I’ve been writing a lot lately about the growing threat of Islamic terror and the infiltration of Islamists into our country. I’ve written about “The Project,” twice – the Muslim Brotherhood’s long term grand plan of “Civilization Jihad” in the U.S. I’ve reported on the “Clock Boy”  of Irving Texas,  his father and their odd behavior, as well as the radical groups and leaders they choose to align with. I’ve even written about how even their requirement of halal products is funding terror. As a reader so aptly pointed out: “Single minded little buggers, aren’t they? Apparently pretty much anything they do is to advance their death cult…”

And the reader is right. Everything these radicals do is at least loosely according to the plan for Muslim dominance of this country and the entire western world.

Yet still, this slow advance has kept us relatively safe on American soil. But imagine what life would be like if here in America we had to contend with what Israel has been and is presently experiencing. Imagine walking down the streets of any city or town in the U.S. and someone, completely unprovoked, comes up behind you and attacks – savagely stabbing you. Imagine this has occurred not once or twice, but 10 or more times in short order – and the perpetrators all had one thing in common – either the same race, or religion, etc.

Now add to that – imagine more groups of the same ilk were hold up in Mexico or Canada, just indiscriminately launching missiles, rockets and mortars into our cities and towns along the border. What do you think we might do? How would we react to this constant assault?

We might look to our government and our military to protect us. We would probably further arm ourselves. We might even lash out at our police and officials for not doing enough to protect us. Its one thing to take it upon yourself to defend your family or your home against attackers or invaders – but arming yourself will do little against a mortar barrage. END_OF_DOCUMENT_TOKEN_TO_BE_REPLACED

from The Gatestone Institute:

U.S. President Barack Obama and Secretary of State John Kerry may be able to force Palestinian Authority President Mahmoud Abbas, under threats and pressure, to sign a “framework agreement” with Israel. But as this week’s rally of hatred in the Gaza Strip shows, even after the signing of a Palestinian-Israeli “peace” treaty, a large number of Palestinians will not abandon there dream of destroying Israel.

A mass rally held in the Gaza Strip on March 23 showed that Hamas continues to enjoy popular support among Palestinians. Tens of thousands of Palestinians took to the streets to attend the rally commemorating the 10th anniversary of the assassination of Hamas founder Sheikh Ahmed Yassin.

Hamas officials claim that nearly one million Palestinians attended the rally in the center of Gaza City. END_OF_DOCUMENT_TOKEN_TO_BE_REPLACED

Palestinian Authority President Mahmoud Abbas met in Saudi Arabia Monday with US Secretary of State John Kerry and discussed with him the latest developments in the region, Palestinian officials in Ramallah said.

This was the first meeting of its kind since Kerry replaced Hillary Clinton as Secretary of State.

“The meeting focused on efforts to revive the peace process,” said a Palestinian official. “They also discussed President Barack Obama’s planned visit to the region later this month.”

Another PA official said that Abbas requested during the meeting that the US Administration exert pressure on the Israeli government to release scores of Palestinian prisoners and freeze construction in settlements.

The official quoted Abbas as telling Kerry that unless Israel met these two conditions, the PA leadership would not be able to resume the stalled peace talks.

Abbas, according to the official, complained during the meeting about the financial crisis in the PA and called on the US and donor countries to help solve the issue.

Israel has to know it is in big trouble. I don’t believe there is a single soul in the Obama Administration who is pro-Israel; certainly not John Kerry.

My advice is to build as many settlements as possible and widen your buffer zone as much as you dare. Danger is coming your way.

By: Ed Morrissey of HotAir

Isn’t it funny what you can find out on Friday evening about what our executive branch does? For instance, Agence France-Presse reported last night that Barack Obama bypassed Congress to send $192 million to the Palestinian Authority, claiming that national security required the US to put money into Mahmoud Abbas’ pocket:

President Barack Obama has signed a waiver to remove curbs on funding to the Palestinian Authority, declaring the aid to be “important to the security interests of the United States.” 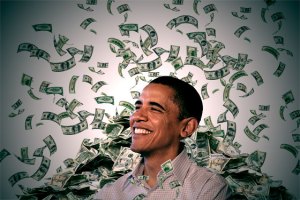 But in a memo sent to Secretary of State Hillary Clinton, published by the White House, the president said it was appropriate to release funds to the authority, which administers the West Bank and Gaza Strip.

In signing the waiver, Obama instructed Clinton to inform Congress of the move, on the grounds that “waiving such prohibition is important to the national security interests of the United States.”

The language of the Palestinian Accountability Act could not be clearer: “[N]o funds available to any Unite 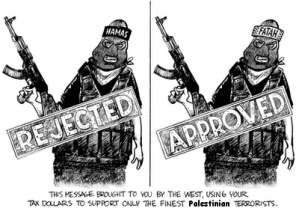 d States Government department or agency … may be obligated or expended with respect to providing funds to the Palestinian Authority.” Obama literally waived that statutory language off yesterday afternoon.

The Times of Israel reported on the official White House explanation of why Obama did so:
The AFP news agency quoted White House spokesman Tommy Vietor as saying the $192 million aid package would be devoted to “ensuring the continued viability of the moderate PA government under the leadership of [Palestinian Authority] President Mahmoud Abbas and Prime Minister Salam Fayyad.”

Vietor added that the PA had fulfilled its major obligations, such as recognizing Israel’s right to exist, renouncing violence and accepting the Road Map for Peace.

Have they? They certainly haven’t done so since Hamas rejoined the PA in February. Hamas has refused to change its charter to recognize Israel or renounce violence, and certainly they have rejected the Road Map for Peace, which has been lying dead for years thanks to the PA’s refusal to seriously implement it. When Hamas broadcasts its recognition of Israel in Arabic — something that the PA has never done, to my knowledge — then perhaps the Obama administration’s claims can be taken seriously. 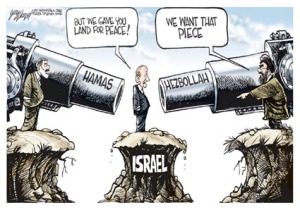 Andy McCarthy calls this a “triple play,” and slams this claim by Vietor as fantasy:

In the real world, the very immoderate PA has reneged on all its commitments. In addition to violating its obligations by unilaterally declaring statehood, the PA has also agreed to form a unity government with Hamas, a terrorist organization that is the Palestinian branch of the Muslim Brotherhood. The PA continues to endorse terrorism against Israel as “resistance.” Moreover, the PA most certainly does not recognize Israel’s right to exist. Back in November, for example, Adil Sadeq, a PA official writing in the official PA daily,Al-Hayat Al-Jadida, declared that Israelis: 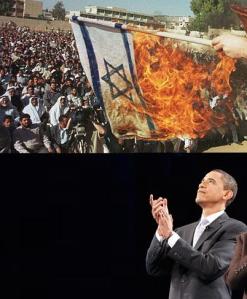 In sum, everything Obama is saying about Palestinian compliance is a lie. Even if we were not broke, we should not be giving the PA a dime. To borrow money so we can give it to them is truly nuts.

The White House knows it, too — which is why we only found out through the Friday night news dump

A moderator at an event celebrating the 47th anniversary of the founding of Fatah said, “Our war with the descendants of the apes and pigs (i.e., Jews) is a war of religion and faith”.

The Mufti then cited the Hadith (Islamic tradition attributed to Muhammad) saying that the Hour of Resurrection will not come until Moslems fight the Jews and kill them.

There are numerous collections of Hadith, some of which are not accepted as reliable.

However, the Mufti stressed that the Islamic belief that Jews will be killed by Moslems as a precursor to Resurrection, is an authentic Islamic belief because it appears in “the reliable” and trusted Hadith collections of Al-Bukhari and Muslim.

This is not the first time the Mufti has incited to hatred against Jews in the name of Islam. In a sermon at the Al-Aqsa Mosque in 2010, he preached that the Jews are the “enemies of Allah.”

The Mufti is appointed by Palestinian Authority Chairman Mahmoud Abbas. The same leader with which the United States insists Israel have peace talks.

This Islamic tradition asserts that as the killing of Jews will progress, Jews will hide behind stones and trees, but even they will expose the Jews and call out: “Oh Muslim, servant of Allah, there is a Jew behind me, come and kill him.” 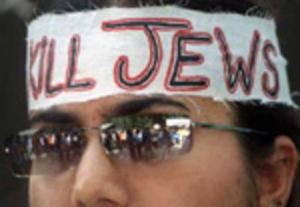 One tree however, called the Gharqad, will hide the Jews from
the Moslems.

The Mufti in his talk at the Fatah event claimed that in
response to this Islamic belief, Israelis have been planting Gharqad trees around their cities and towns, in order to have a place to hide from the Moslems who will be coming to kill them.

The Mufti proclaimed, “The Hour [of Resurrection] will not come until you fight the Jews. The Jew will hide behind stones or trees.”

“Then the stones or trees will call: Oh Muslim, servant of Allah, there is a Jew behind me, come and kill him. Except the Gharqad tree [which will keep silent].” 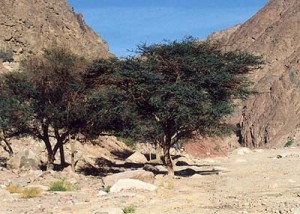 “Therefore it is no wonder that you see Gharqad [trees]
surrounding the [Israeli] settlements and colonies.”

Anyone who believes there can be peace between Israel and these Islamists is surely a fool.