Amy Schumer, Amy Poehler, and a host of other progressive activists just really want to help New York City waitresses earn minimum wage, and they’re willing to stick their neck out to do it.

Another stupid law proposed by Nursemaid legislators to try to govern every aspect of our lives. Will we ever learn that we

cannot legislate stupidity out of society? Guess not.

This time it is a law proposed only by the State of New York, but I wouldn’t expect this safety edict to be limited to just one State. Sooner or later, some Congressman or Senator will pickup the ball and run with it – straight to Capital Hill.

As with many eventual decrees handed down by tyrannical busy-body progressives, it starts first with a request, or in this case an “urging.” It is then followed with a threatening demand, as in the case in New York.

New York State of Politics writes that, “While our legislation would only protect New Yorkers, we urge Procter & Gamble and all manufacturers of colorful detergent pods to offer the same protections to the nation and immediately commit to the precautions set forth in our legislation,” wrote the lawmakers, Sen. Brad Hoylman and Assemblywoman Aravella Simotas.

“It’s time that you recognized the danger to those least able to protect themselves from a poisonous product packaged like candy. If not, these products should be removed from store shelves as soon as possible.” Leftists do like to make demands. END_OF_DOCUMENT_TOKEN_TO_BE_REPLACED

New York Governor Andrew Cuomo has acquiesced to a ban of hydraulic fracturing (fracking) of shale to produce natural gas in his state based on “uncertainties” concerning the possible effects of the activity on public health. Essentially, the New York Department of Health (DOH) report Cuomo cites defaulted to the precautionary principle:

When an activity raises threats of harm to human health or the environment, precautionary measures should be taken even if some cause and effect relationships are not fully established scientifically. In this context the proponent of an activity, rather than the public, should bear the burden of proof.

END_OF_DOCUMENT_TOKEN_TO_BE_REPLACED

In the bucolic town of Schaghticoke, NY, Liberty Ridge Farm serves as a setting for family outings and events of all sorts on a family owned farm in the country. They are open to the public for a portion of each year, featuring events ranging from day camps to field trips to a corn maze. And until recently they hosted weddings. That all changed after the owners, Cynthia and Robert Gifford, encountered Melisa Erwin and Jennifer McCarthy, a lesbian couple who approached the Giffords about holding their wedding there. Cynthia Gifford declined, citing her religious beliefs.

The couple tape recorded a conversation with the owners and took their complaint to the New York State Division of Human Rights. Things went downhill quickly from there.

In July, an administrative law judge found the Giffords had discriminated against the couple and ordered fines totaling $13,000—$1,500 mental anguish fine to each of the women and a $10,000 civil damages penalty to the state. END_OF_DOCUMENT_TOKEN_TO_BE_REPLACED

Remember when you were a kid? Maybe your family and friends got together to play a board game (what’s that). You set up the board on a table, set out the pieces and were ready to start.

Invariably the question of the dice would come up. What if, during your roll, one of the dice fell off the table? If it landed on the floor and a desirable number came up, you thought the roll should count, but if it was a crappy number, you would claim it didn’t count and declare a rollover.

Well, that the Obama administration’s immigration policy. Actually, that pretty much sums up his entire presidency.

We see examples of this everywhere. What happens when a Governor decides the feds are doing squat about the illegal infestation in his or her state? Of course, they try, with the help of their own state legislators, to devise a remedy.

And what do the feds do? They step in and declare that immigration is the purview of the federal government or a federal judge deems the measure “magically” unconstitutional. END_OF_DOCUMENT_TOKEN_TO_BE_REPLACED 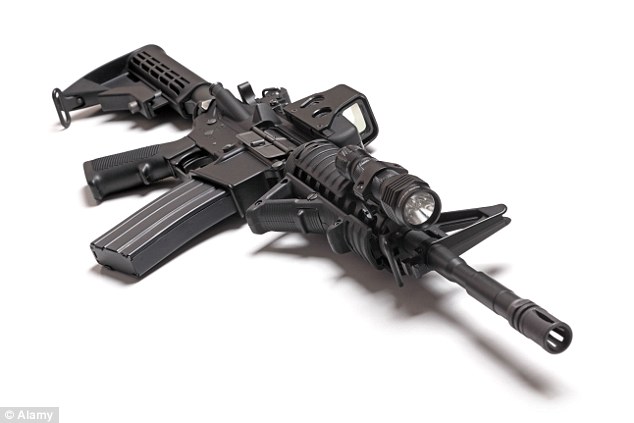 Non-compliant: This AR-15 has an adjustable stock (the part that touches the shooter’s shoulder), pistol grip, barrel shroud (to keep the shooter from being burned during continuous shooting) and a threaded barrel with an attachment already on the end END_OF_DOCUMENT_TOKEN_TO_BE_REPLACED

By now everyone, at least the geeks that follow this stuff (like you and me), have heard New York Gov. Andrew Cuomo’s recent speech regarding the few conservatives that may still reside in his state.

For those who haven’t, here’s a quick recap: The governor stated that, “There is a schism in the Republican Party. They’re searching to define their soul… Who are they? Right to life, pro-assault weapons, anti-gay – if that’s who they are, they have no place in the state of New York because that’s not who New Yorkers are.”

Now that sounds reasonable, don’t you think? It sure is nice to see the lefts tolerance and acceptance of others viewpoints and beliefs on display.

Now rumor is that Rick Perry, Gov. of Texas is preparing a speech to counter Cuomo’s remarks. As luck would have it, I have obtained a draft copy of said speech. Let me reveal it to you now.

“Conservatives, unlike liberals, are freethinkers and thus have varying opinions on many subjects. Normally we conservatives do not march in lockstep – but I, as the duly elected speechifier (got that word from “W”) do decree the following to all who reside in the state of Texas.” END_OF_DOCUMENT_TOKEN_TO_BE_REPLACED

I posted this article last Thursday, the 21st. Since then, the list of gun and accessory manufacturers has swelled over 700%.

This story has been updated to add two additional gun makers and sellers to the list of those no longer patronizing law enforcement in states that do not support the Second Amendment.

Oh Happy Day! Finally some businesses willing to stand up to the nanny government. I hope more will sign on to this. If your looking to purchase a weapon or related item, please consider patronizing these brave companies.

Since New York State enacted its restrictive new gun laws, many manufacturers have sent that state (and others) a message: If local governments are going to severely restrict the ability of citizens to own guns, then these companies will not be selling to law enforcement in those areas.

Among the gun manufacturers sending that message:

On his Facebook page, McLaughlin not only shared the video, but  also the following:  Continue Reading

It’s a local bar with a difference – the  difference being its locality.

Welcome to Sandy’s Bar, not at the end of the street but plonked right in the middle.

Just days ago this was part of The Sugar Bowl, summer hangout at Breezy Point’s shore. Until it was ripped from its  moorings by Hurricane Sandy and delivered to Gerritsen Beach, according to the  people living there. 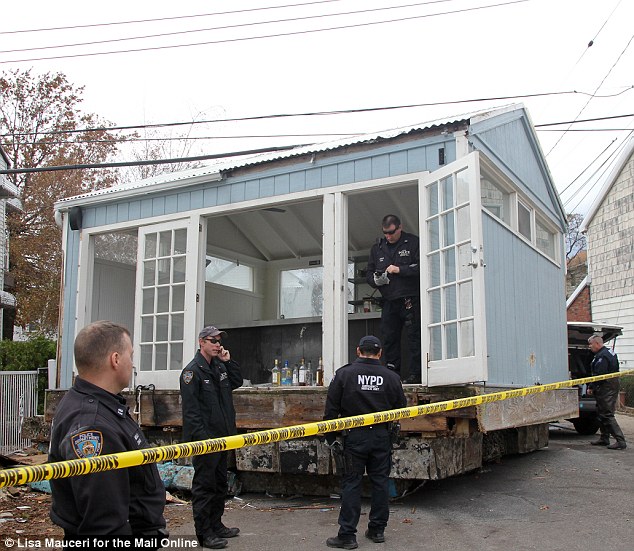 How it used to look: The Sugar Bowl in Breezy Point  before its extraordinary journey. It turned up in Gerritsen Beach complete with  tables and chairs, shot glasses and an impressively stocked bar

An incredible journey of around seven miles,  across the bay and made even more remarkable by the fact that it turned up  complete with tables and chairs, shot glasses and an impressively stocked  bar.

With its clapboard walls and freshly painted window sills it looks like something straight out of The Wizard of Oz.

Little wonder one local speculated that it  had been picked up by the wind and dropped where it sat on Madoc Street, Gerritsen Beach.

In fact one man knew exactly what had  happened. 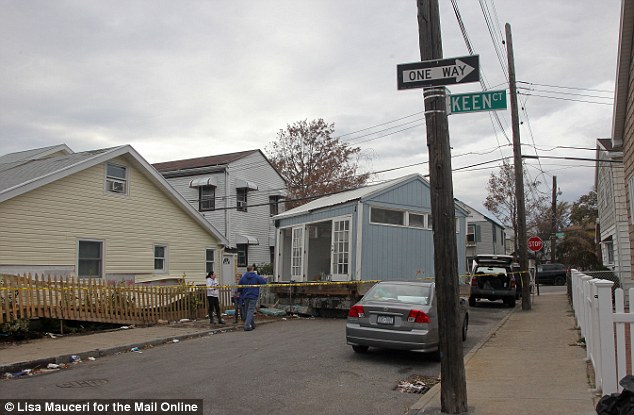 The Sugar Bowl floated into Gerritsen Beach  on floodwaters, ending up in the middle of a street. Locals quickly renamed it  ‘Sandy’s Bar’ 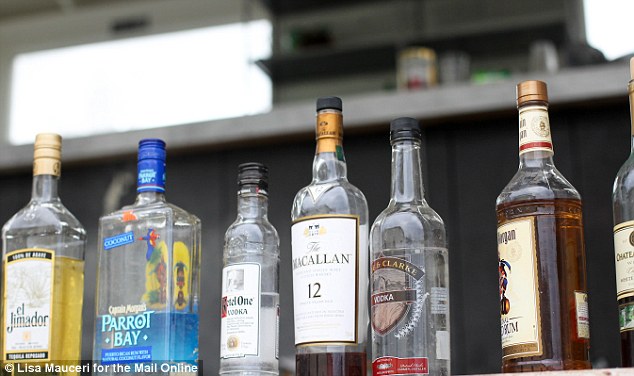 Residents of Gerritsen Beach, Brooklyn, took the opportunity to have a break from the misery when they found the bar was fully stocked Some of the revellers who enjoyed  themselves when the Sugar Bowl washed up in Gerritsen Beach, Brooklyn

Charlie Coppolino, 42, witnessed the arrival  of the bar, thought to be a portion of The Sugar Bowl that wasn’t flattened by  the storm.

He said: ‘I looked out my bedroom window and  I saw what looked like a house just flying past. The water must have been five,  six feet deep.

‘I said, “Ma we’re in trouble!’ It came in  Jamaica Bay and smashed my gazebo, through my gate, ran over a car and just went  down the road about five miles an hour like a steamroller.’

Cycling up to where the bar sat askew Lawrence Lowey, a resident of Gerritsen for 17 years joked, ‘I told  them to  park my bar and look where they put it. You can’t get the help.’

According to resident Billy Gooch, ‘All of us  here, we’d had the panic we’d been  through hell and the day after the storm  we’d worked all day to save  what we could. This illustration shows how the bar was swept  out into the water from its original location in Breezy Point before being  washed up at Gerritsen Beach, Brooklyn. Witnesses said it was travelling in  floodwater up to six feet deep …but the fun couldn’t last forever, and the police ordered for the bar to be demolished and cleared away 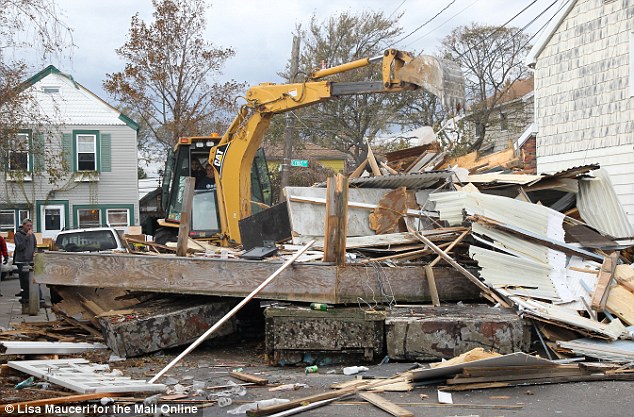 ‘There’s this bar – it’s got Hennessy,  Captain Morgans, 12 year old Maclallan, vodka and cases of Heineken…well what  were we going to do? We had a party. We needed to let off steam.’

Once stocks ran out the bar, believed to be  the Sugar Shack part of the Sugar Bowl bar, operated a strict Bring Your Own  Bottle policy.

It turned out to be a last hoorah for the  bar. By late afternoon the police had turned up.

Believing  they were there to remove a  fibre glass boat they were initially utterly bemused by what they  found.

But ultimately, and to boos from the  good-natured locals, they called time on The Sugar Bowl/Sandy’s Bar, breaking it  up and clearing it away. The Breezy Point area of New York was  devastated by Superstorm Sandy, with flooding and fires wrecking homes and  businesses