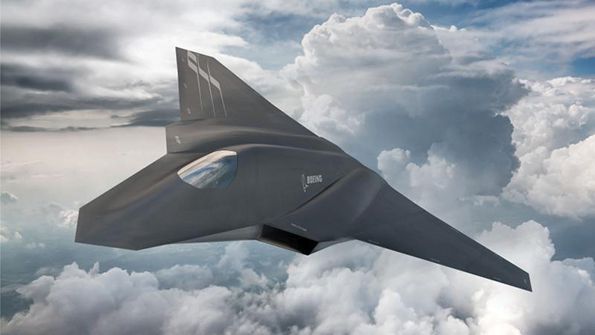 The announcement of the United Kingdom’s new Tempest fighter project marks yet another new fighter program set to delivery in the 2030s. In addition to Tempest, a new Japanese fighter, a Franco-German project, and whatever China and Russia are surely working on, the United States has not one but two fighter jets. END_OF_DOCUMENT_TOKEN_TO_BE_REPLACED

Modern aircraft carriers may seem like the bleeding edge of technology, but they still rely on some remarkably low-tech tools to get the job done. END_OF_DOCUMENT_TOKEN_TO_BE_REPLACED

Underwater mine-hunting is one job you don’t mind a robot taking away from you, which is why General Dynamics Mission Systems in developing the Knifefish robotic mine-hunter. The unmanned undersea vehicle (UUV) recently completed evaluation tests with the US Navy in a dummy minefield off the coast of Boston, Massachusetts, demonstrating its ability to detect and classify mines submerged at various depths. END_OF_DOCUMENT_TOKEN_TO_BE_REPLACED

No, it’s not Obama or the Trumpster, but the president of the Czech Republic who is calling for a total ban on all migrants into his country. President Milos Zeman has urged his country to seal the border due to the fear of terrorist attacks as have happened in other European nations. And that’s not all he is proposing.

The Olympic Games have begun, and with them have also begun local upheaval, riots, gun-fire and athletes doing what they are not supposed to. Just another great choice of the International Olympic Committee to select a third world nation to host the games.

The U.S. Navy is finally getting rid of possibly the worlds dumbest camouflage uniform – the blueberry and replacing it with yet another camo work uniform. I question the sanity of this decision. END_OF_DOCUMENT_TOKEN_TO_BE_REPLACED

What will we tell our children and grandchildren? When they look us in the eye and ask how we could’ve let it get this bad and what we did to help prevent it?

Did we just stand by and watch as our governments, local, state and federal frittered away trillions of dollars on giveaways and boondoggle projects?

One such boondoggle project that comes to mind is that of the U.S. Navy’s “Great Green Fleet”.

Having been in the Navy and spent some time aboard a carrier, this is particularly disturbing to me.

Defending the nation is one of a very few things our government is actually constitutionally charged with. So it’s more than just upsetting when in February it was announced that the aircraft carrier Lincoln (CVN 72) would have to indefinitely postpone it’s refueling and overhaul due to budgetary constraints.

Great news! A carrier that is undeployable. Oh wait… make that two. The deployment of the carrier Harry S Truman (CVN 75) will also be delayed for the same reason.

As an aside, you know darn well that some bureaucrat thought up the acronym GREENS first, then just assigned words to each letter.

Col. Bob Charette said: “Solar is the best technology for us.” He explained that the Marines could lay the array on the ground to achieve a low profile.

Well, that all sounds great until the soldiers realize it can take up to 12 hours to recharge their equipment. “Wait, Mr. Insurgent, we are not finished recharging!”

Not to be one-upped, the Navy, or should I say the hacks in the White House that command the military, have been purchasing biofuel to power the “Great Green Fleet”. My goodness, how the Chinese and Russians must be laughing about this one.

The grand theory of the brainiacs in Washington is these purchases will create demand, which will drive the price down to be competitive with petroleum products. But as long as the dolts in Washington are happy to pay 20 some bucks a gallon, the suppliers will happily oblige.

To make things worse, the Navy, Agriculture and Energy departments will “invest” $170 million each in bio refineries. That’s $510 million! Why? Because the private sector knows it’s a waste of time and money.

So when your children ask how this could’ve happened, you can assure them that it wasn’t due to projects like the “Great Green Fleet”. You can tell them, with a straight face, that it was a smashing success, a wise “investment” and we helped save the planet for you, little Johnny.

If you don’t shed a tear, you’re not human!

The mood was somber at Cowboys Stadium in Arlington, Texas on Monday as thousands gathered to honor slain Navy SEAL sniper Chris Kyle who was shot to death at a Texas shooting range earlier this month. Photos of Kyle taken throughout his life flashed on the stadium’s giant Jumbotron as loved ones, as well as complete strangers whose lives he touched, remembered his legacy.

While millions of Americans know him as the deadliest sniper in U.S. history, others that knew Kyle closely spoke about the charitable work he did off the battlefield to help struggling veterans and his role as a caring, loving father and husband. It wasn’t his confirmed kills tally that he wanted to be remembered for. The “American Sniper” author said he wanted to be remembered as someone who gave everything he had to help others.

A cross, helmet, vest, boots and a sniper rifle were flanked by flowers on the stage, placed right behind the Cowboy star.

Though Kyle’s wife, Taya, was one of the last people to speak at the memorial service, her message was arguably the most powerful and by far the most emotional. Please Continue 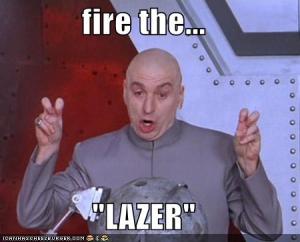 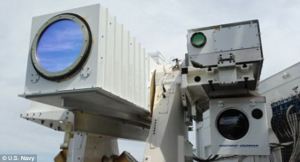 I love my Dad and I personally know how large a carrier is, but it wouldn’t have been large enough. Kudos to this Father / daughter team.

Among the many difficulties that hardworking  members of the U.S military must endure, is the long periods of separation from  family and friends.

For one father and daughter that burden has become a little lighter after they were both deployed to the USS Harry S. Truman.

It is Breanna Janssen’s first deployment to the ship where she  will serve as a Gunner’s Mate 3rd Class while her father David is the leading  chief petty officer of maintenance for the Seahawks, of  Carrier Airborne Early Warning Squadron 126, part of the tactical air  force. 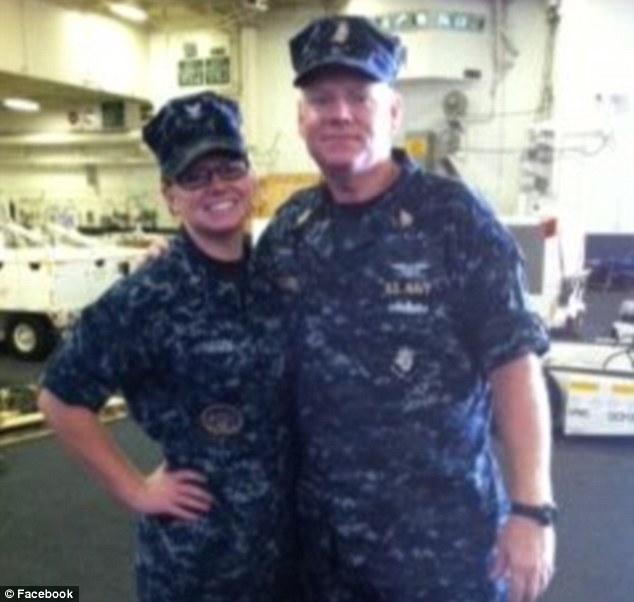 Duty calls: Father and daughter, Breanna and David  Janssen have been deployed at the same time to the USS Harry S Truman 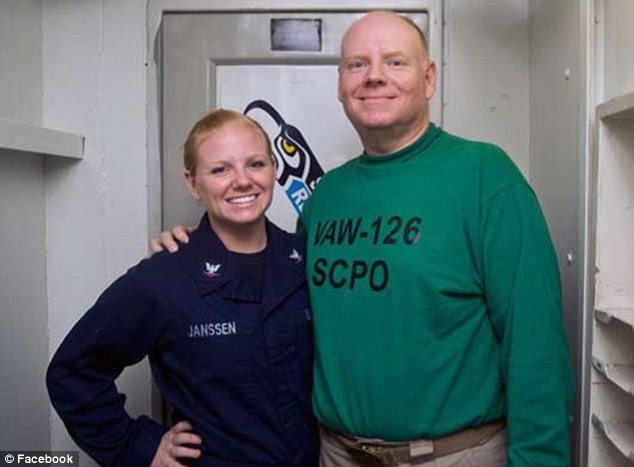 Family calling: Both father and daughter were delighted  to be on the same ship in what is Miss Janssen’s first deployment and likely to  her father’s final one

The father and daughter, are originally from  Welsh, Louisiana. Miss Janssen, 21, who is stationed at Norfolk, Virginia, told News Channel  3: ‘It’s  comforting to know that there’s always someone to talk to, no matter what’s  going on in my life. Having my dad on  board provides me with a great stress reliever.’

Her father added: ‘With  all of my years of experience of life in the Navy, I can help her with problems  I’ve already faced myself.’

Mr Janssen said the experience is  made extra  special by the fact that while it is his daughter’s first time at sea, this is  likely to be his last.

The young woman said that she was inspired to  join the Navy because of her father’s example and distinguished career which  includes eight previous deployments. 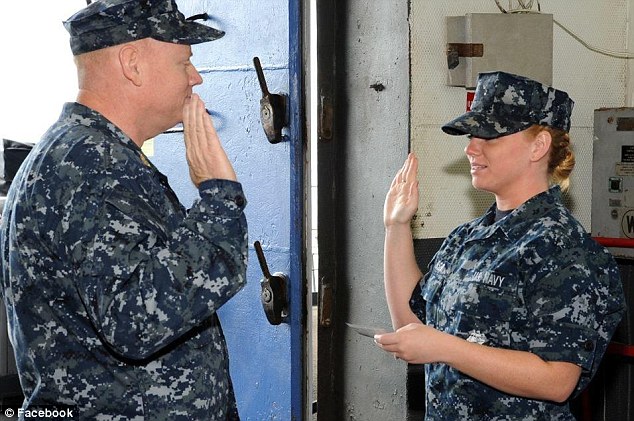 Honor: Breanna Janssen reads the Oath of Enlistment to  her father David 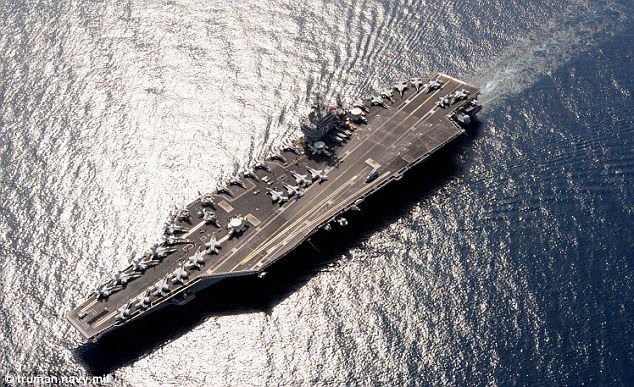 Deployment: Father and daughter are serving on the USS  Harry S Truman, a nuclear-powered aircraft carrier

The Navy allows siblings to serve together  however a parent serving with a child is unusual.

The USS Harry S Truman was built in 1993 and  is named after the 33rd President of the United States.

Jim Parks may be 93-year-old, but he isn’t slowing down. The former Navy sailor and World War II service member is on a mission to officially honor his fellow veterans. 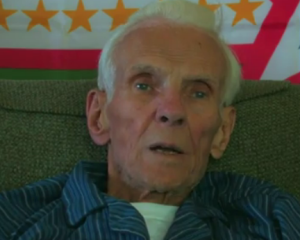 Parks, who has a passion for commemorating those who have given back to the United States of America, has created a flag that serves this very purpose — a symbol that he hopes to eventually see flying in all 50 states.

Parks, who pushes on despite health problems, has stated his surprise with the fact that there are already flags for each branch of the militar 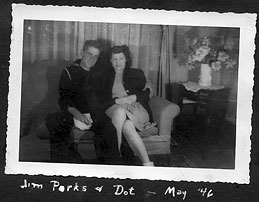 y and for individuals who are missing in combat. But the dearth of a more general symbol to represent the many individuals who have served has been a concern to him, so he has set out on a crusade to see that this alleged wrong is righted.

“Twenty-three million veterans that served our country: Don’t they deserve to have an emblem that represents them?, Parks rece

ntly asked. ”You always have to be optimistic. If it doesn’t work one way, try another way. So, I keep trying. I’ve come a long way in 10 years.”

Already, Parks is halfway to his goal, as 25 states have voiced support for the flag. The California state legislature was the first to take up the motion b 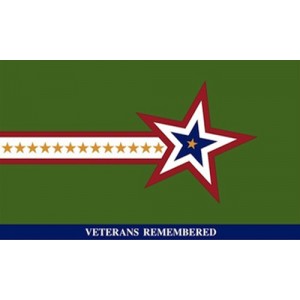 ack in 2006 for what Parks has dubbed the “Veterans Remembered Flag.” The symbol, rather than singling out a specific group of servicemen and women, is intended to serve as a memorial for “past, present, and future veterans,“ while providing ”an enduring symbol to support tomorrow’s veterans today.”

For more information and to order a flag click on the following link: