A 25 page document recently released by the Atlantic Council (AC), based in the U.S., states that Russia could “attack Poland overnight.”

The report claims that Russia could take advantage of NATO “being distracted by another crisis” or by misinterpreting activities NATO is involved in. After the annex of Crimea in 2014, the Baltic States have become legitimately nervous, wondering who Ruusia’s next target may be.

Many of these think tanks are employed from time to time to hash out war-game scenarios, as it were. But this is no game. The Atlantic Council is deadly serious, even going so far as to suggest possible counterattack targets should Russia decide to move on Poland – targets including the Kaliningrad and Metro Moscow.

They warned that “Even if Moscow currently has no immediate intent to challenge NATO directly, this may unexpectedly change overnight.” The Council also recommends that the Obama administration authorize more shipments of missiles to the Baltic region. END_OF_DOCUMENT_TOKEN_TO_BE_REPLACED

An Afghan police officer turned his gun on NATO troops at a remote checkpoint in southern Afghanistan before dawn Sunday, killing four American service members, according to Afghan and international officials.

It was the third attack by Afghan forces or insurgents disguised in military uniforms against international forces in as many days, killing eight troops in all.

Recent months have seen a string of such insider attacks by Afghan forces against their international counterparts. The killings have imperiled the military partnership between Kabul and NATO, a working relationship that is key to the handover of security responsibilities to Afghan forces as international troops draw down. 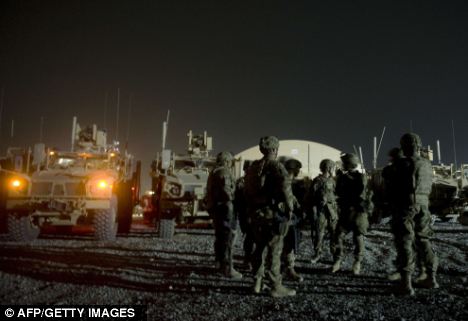 Night patrol: Infantry men from the 1st platoon, Delta company attend a briefing prior to embarking on night patrol in Kandahar province

Meanwhile, according to Afghan officials, airstrikes by NATO planes killed eight women and girls in a remote part of the country, fueling a long-standing grievance against a tactic used by international forces that Afghans say causes excessive civilian casualties.

Villagers from a remote part of Laghman province’s Alingar district drove the bodies to the provincial capital, claiming they were killed by NATO aircraft while they were out gathering firewood before dawn. (Who gathers firewood in the dark?)

‘They were shouting ‘Death to America!’ They were condemning the attack,’ said Laghman provincial government spokesman Sarhadi Zewak.

Seven injured females were also brought to area hospitals for treatment, some of them as young as 10 years old, said provincial health director Latif Qayumi.

NATO forces at first said that about 45 insurgents and no civilians were killed in the attack but spokesman Jamie Graybeal stressed later that they took the charge of civilian deaths seriously and were investigating the allegations. (We’ll never find out the truth, because that is not important. It’s the mere allogation that counts. Gee, I wonder where the Taliban learned that accusatory technique? From the American left perhaps? Remember this quote from the Clarence Thomas confirmation hearings: “The nature of the evidence is irrelevant. It’s the seriousness of the charge.”) 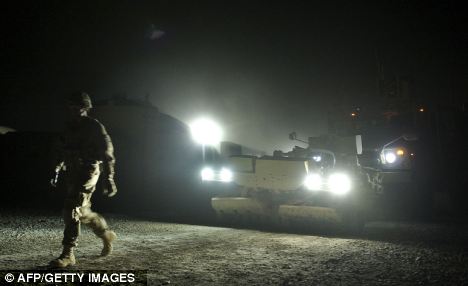 ‘Protecting Afghan lives is the cornerstone of our mission and it saddens us when we learn that our action might have unintentionally harmed civilians,’ Graybeal said. (Excuse me? That’s our U.S. military’s freaking mission?!)

Afghan President Hamid Karzai condemned the airstrike and said a government investigation had been opened.

The recent violence also comes amid an international uproar about an internet video mocking the Prophet Muhammad that many fear could further aggravate Afghan-U.S. relations. (but, of course, we all know that’s a lie. Even the brother of al Qaeda leader Ayman al Zawahiri admitted he hadn’t see the video.)

The video has sparked protests throughout the Muslim world and the Afghan government blocked the YouTube site that hosts the video and its parent company, Google, over the weekend in a move to prevent violent protests. So far, protests in Afghanistan have remained peaceful. 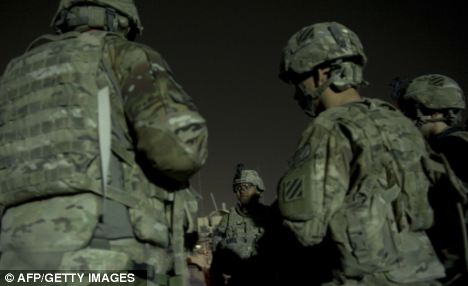 Details of Sunday’s attack were slow to come out because it took place in a remote area, said Graybeal, the NATO forces spokesman.

‘The attack took place in the vicinity of an outpost in southern Afghanistan. It is my understanding that it was a checkpoint,’ said Graybeal.

International forces often work with Afghan police to man checkpoints as part of the effort to train and mentor the Afghan forces so that they can eventually operate on their own.

The goal is to turn over all security responsibility for the country to the Afghans by the end of 2014, though numbers of NATO forces have already been reduced in many areas. 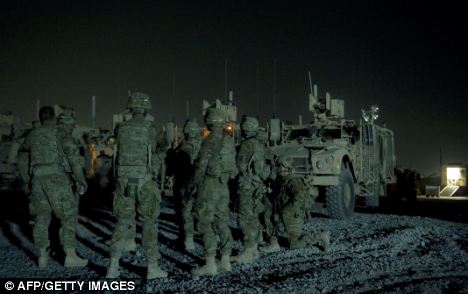 Graybeal said one police officer was killed in the clash with NATO troops but that the other officers at the site fled and it was unclear if they were involved in the attack or not.

Two international troops were wounded and were receiving treatment, Graybeal said. He did not say how serious the injuries were.

It was not clear if some of the Afghan police turned on their American helpers in the middle of the battle with the insurgents, or afterward, or were somehow forced into attacking the American troops by the insurgents, Gilani said.

‘The checkpoint was attacked last night. Then the police started fighting with the Americans. Whether they attacked the Americans willingly we don’t know,’ said Gilani. (my money is on willingly) 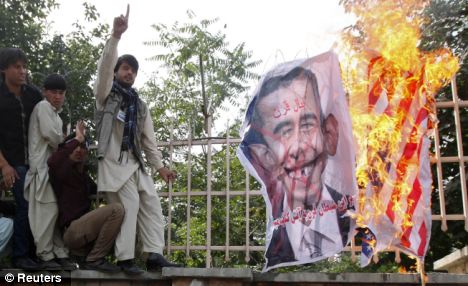 Continuing unrest: Afghan protesters set fire to a U.S. flag and shout slogans during a demonstration in Kabul

He said all four of the dead were American. A U.S. official speaking on anonymity because the information had not been officially released confirmed that the four killed were American.

Taliban spokesman Qari Yousef Ahmadi said the police who attacked were not affiliated with the Taliban insurgency. (the terrorists have spokesmen?)

‘But they are Afghans and they know that Americans are our enemy,’ Ahmadi told The Associated Press. In an emailed statement, he said the police who fled have joined up with the insurgency.

The coalition said in a statement that they were investigating what happened.

So far this year, 51 international service members have died at the hands of Afghan soldiers or policemen or insurgents wearing their uniforms. At least 12 such attacks came in August alone, leaving 15 dead.

On Saturday, a gunman in the uniform of a government-backed militia force shot dead two British soldiers in Helmand district in the southwest. 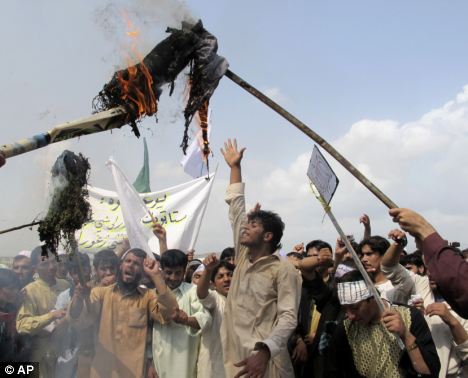 ‘Death to America’: Afghans burn an effigy of President Obama during a protest in Khost, south-east of Kabul

Britain’s defense minister said the two soldiers, from 3rd Battalion the Yorkshire Regiment, were killed at a checkpoint shooting in Nahri Sarraj district of Helmand province in southern Afghanistan, where the Taliban have their strongest roots.

NATO said earlier that the gunman was wearing a uniform used by the Afghan Local Police, a village-level fighting force overseen by the central government.

That strike came a day after insurgents wearing U.S. Army uniforms attacked a military base, killing two American Marines, wounding nine other people and destroying six Harrier fighter jets, military officials said. Fourteen insurgents were killed. The Taliban claimed responsibility for that attack and said that it was revenge for the video insulting Prophet Muhammad.

In the capital on Sunday, several hundred university students chanted ‘Death to America!’ and ‘Long life to Islam!’ over several hours to protest the video.

Riot police cordoned off the area and the protest ended without incident in the early afternoon. A smaller protest went forward in the western city of Herat.

Enough is enough. We have no mission or purpose over there. We’re going to leave anyway. Let’s just pack up and bring every man and woman home. They already know our politicians don’t have the stomach to win at any cost, or even what winning would look like. The terrorists will just continue to attack us with impunity, receiving little or no reprisal. On our way out we can burn down all the poppy fields and chemical treat them so they can’t be regrown.

The following video is yet more stunning evidence of the current administrations total disregard for the Constitution.

Defense Secretary Leon Panetta has come out and said that the military will seek international permission before, or even if, they consult Congress.

While responding to Senator Sessions at an Armed Services Committee meeting, Panetta said that “our goal would be to seek international permission” and “whether or not we would want to get permission from the congress – I think those are issues we would have to discuss as we decide what to do here.”

So basically, they are saying they have no intention of following the Constitution and seeking Congress’s approval before taking military action?! But they will ask NATO or the troglodytes at the U.N.