AP: Lined pages with a doodle of the Liberty Bell  and a CIA document outlining a Mafia-connected plan to assassinate Fidel Castro  for $150,000 are among thousands of Robert F. Kennedy documents made public on Thursday.

The National Archives and Records  Administration and the John F. Kennedy Presidential Library in Boston released  some 2,700 pages of documents Kennedy compiled as attorney general from 1961 to 1964, offering a glimpse into Cold War decision-making.

Though the documents, released just shy of the 50th anniversary of the Cuban missile crisis, don’t rewrite Cold War  history, they do provide insight into the personal thoughts of the era’s key figures, historians say. 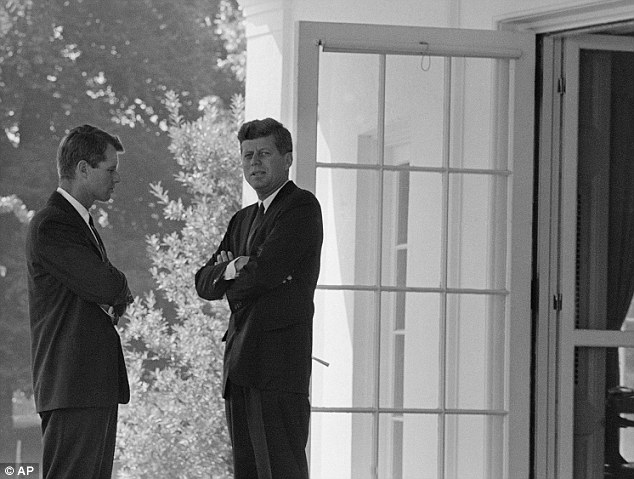 Band of brothers: U.S. President John F. Kennedy, right,  confers with his brother Attorney General Robert F. Kennedy at the White House  on Oct. 1, 1962 during the buildup of military tensions between the U.S. and the  Soviet Union, that became the Cuban missile crisis later that month 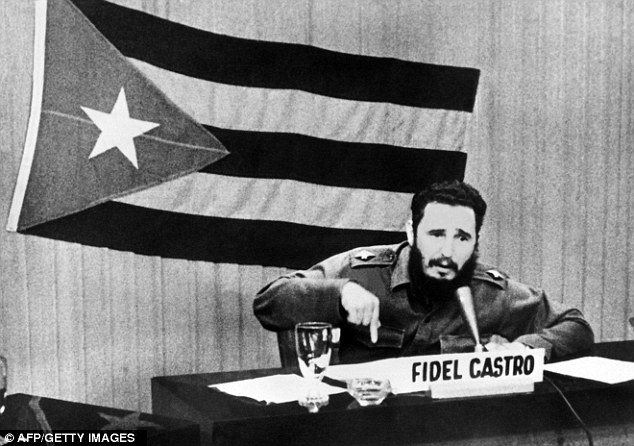 Revolutionary: Cuban leader Fidel Castro (at a speech on  October 22, 1962, during the Cold War Cuban Missile Crisis) was described as  ‘not very stable … touchy, impatient and rash,’ in a CIA profile that was  recently released

Robert Kennedy advised John F. Kennedy during the Bay of Pigs invasion and the missile crisis, key moments during his brother’s  presidency.

His title as attorney general ‘disguised his real position, which was the closest adviser to the president and the president’s confidant and the person the president trusted most,’ said  journalist and historian Michael Dobbs, who blogs for Foreign Policy.

‘That’s the interesting point of this, that  he kind of reflects his brother’s thinking.’

The seven boxes of newly released material  include telegrams, reports, meeting transcripts and handwritten notes by Kennedy, some with doodles and quotes in the margins.

‘It gives you a sort of insight into what was  on his mind, what he doodled,’ Dobbs said. ‘It’s interesting from a human perspective.’ 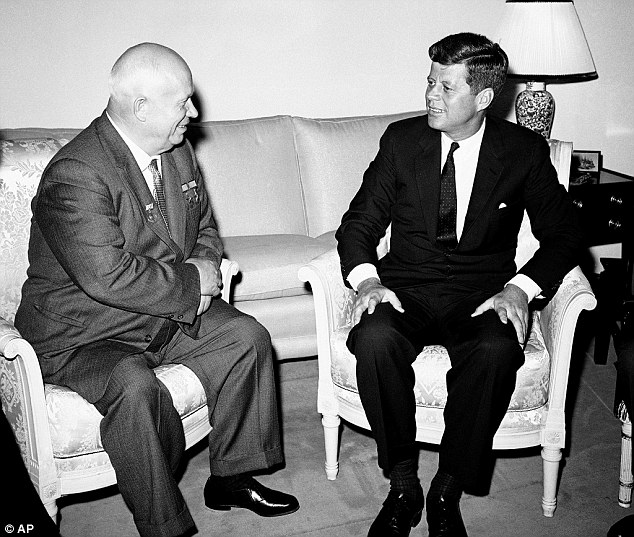 Cold War: Soviet Premier Nikita Khrushchev and President  John F. Kennedy met on June 3, 1961 during their summit meetings in Vienna  before the Soviet began to build bases in Cuba to launch nuclear missiles

One page, sandwiched between lined pages of  notes on the Bay of Pigs invasion, includes a sketch of the Liberty Bell with a  summarized quote from a Polish World War II memorial in Italy.

‘We the Soldiers of Poland for your liberty and ours give our souls to god, our bodies to Italy and our hearts to Poland,’  Kennedy wrote in pencil.

The 1961 botched invasion sought to oust communists with the help of anti-Castro Cuban exiles and veiled U.S. support.  More than 100 members of the CIA-sponsored invasion team were killed and many  were captured by Cuban forces.

One CIA document offers a profile of Castro:  It calls him intelligent but ‘not very stable’ and ‘touchy, impatient and  rash.’ 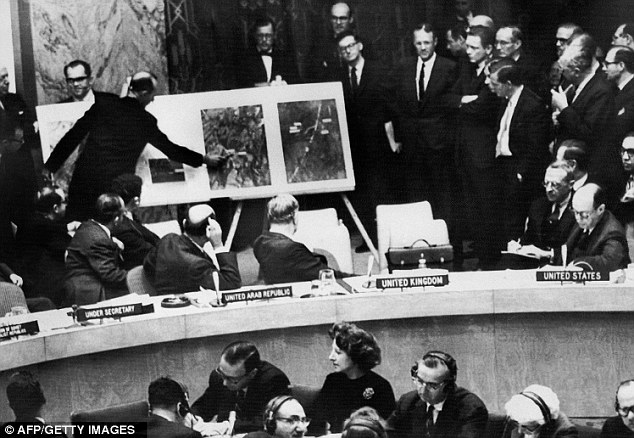 A case for action: A U.S. official shows aerial  photographs of one of the Cuban medium-range missile bases, taken October 1962,  to the members of the United Nations Security Council 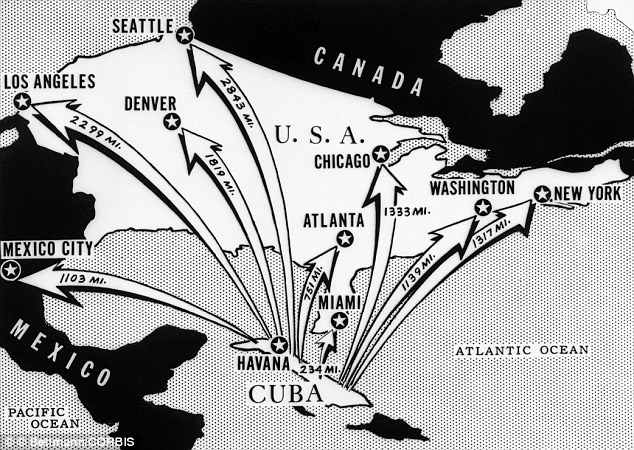 Launch: This newspaper map (from October 1962 during the  Cuban Missile Crisis) shows the distances from Cuba of various cities on the  North American Continent

Another outlines plans to assassinate Castro,  including a 1964 plan with connections to the Mafia.

Another prominent thread throughout the documents is the 13-day crisis over Soviet missiles in Cuba.

On one white page from a meeting on Oct. 16,  1962, the first day of the crisis, Kennedy wrote out two columns: proponents of a blockade against Cuba and supporters of a military strike.

‘It’s interesting to see in his handwriting who’s on which side,’ Dobbs said.

The blockade won out.

The materials are available online and at the Boston library. Some are still classified and aren’t available.

‘This is the raw materials we use in order to  reconstruct the past,’ he said. ‘The more documents from different perspectives  give us a clearer sense of what happened.’