Yeah – I’d vote for this Thug for sure!!

John Thompson, a Democrat campaigning for State House in Minnesota, launched into a fiery diatribe during a Black Lives Matter protest outside the home of Minneapolis Police Federation President Bob Kroll on Saturday. During the vitriolic tirade, Thompson hinted that the town of Hugo be burned down, which is where Kroll lives. END_OF_DOCUMENT_TOKEN_TO_BE_REPLACED

Despite being THE online powerhouse and a great place to find virtually anything, Amazon is apparently not the best place to

work, at least for some.

I’m sure many of us have read and heard multiple accounts of employees anonymously complaining of working conditions and “unreasonable” production demands.

But it seems none more than the Muslim community.

Adherent Muslims are required to pray five times a day, every day. If anyone is interested, the five prayers are as follows:

According to Vox.com, Amazon warehouse workers get two 15-minute breaks and one 30-minute break each shift, per federal regulation. Considering how often Muslims must pray, this doesn’t give them anytime to do anything else. So they have to make a choice. Or do they? END_OF_DOCUMENT_TOKEN_TO_BE_REPLACED

Not all that many years ago, the worst things you could say about Minneapolis were that it was very cold in the winter and, for an American city of its size, it was somewhat dull. On the plus side, this traditionally Scandinavian-American burg was a model of safety and cleanliness.

Well, that’s ancient history. Minneapolis is now the world’s #2 capital of Somali Muslims. (#1 is Mogadishu.) In the Somali community, unemployment and welfare dependency rates are high. The city is a major recruiting center for ISIS. At least a couple of ISIS recruits have used taxpayer-funded student loans to fly to the Middle East to become jihadists; many other local Somalis are suspected of wiring welfare cash to terrorist groups. Violent crime is epidemic: as recently as December 13, a Somali Muslim immigrant stabbed a Minneapolis woman no fewer than fourteen times on her way home from work. END_OF_DOCUMENT_TOKEN_TO_BE_REPLACED

After a Minnesota high school banned all flags on vehicles, students showed up Wednesday with a big message for the administration. After meeting with the protest leaders, the administrators agreed to withdraw the flag ban. (Image source: KARE-TV video screenshot)

It seems Rocori High School in St. Cloud, Minnesota, had enough of students who adorned their vehicles with Confederate flags and parked them in the school lot last spring.

END_OF_DOCUMENT_TOKEN_TO_BE_REPLACED

Catching waves in the freezing waters of Lake Superior

Freezing temperatures and high winds would prompt few to call ‘surf’s up’ before barrelling into the icy waves of Minnesota.

But in Stony Point which dips into the western tip of Lake Superior, now’s said to be the perfect time – provided the lake isn’t entirely frozen over. 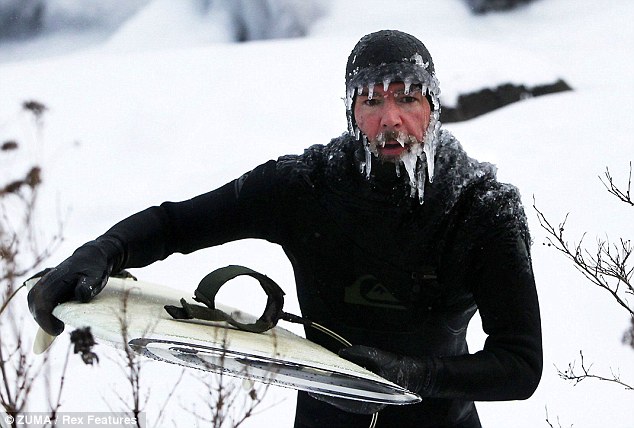 Northwest winds produced 3-foot waves at Stony Point, Minnesota on Thursday bringing out winter surfers despite frigid temps that like this man, froze icicles to his beard and hood 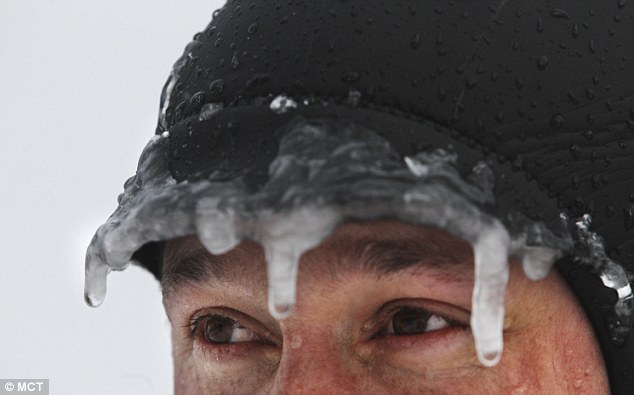 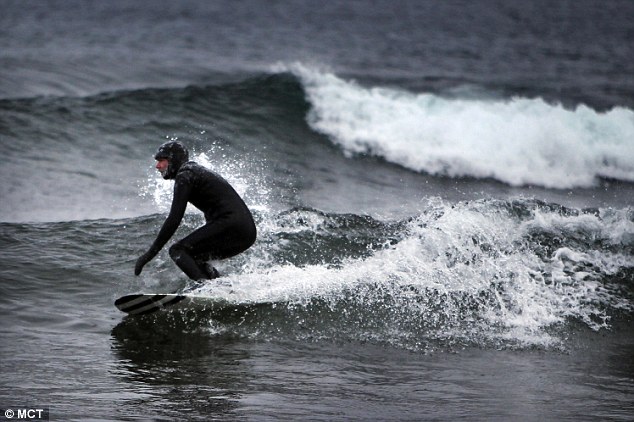 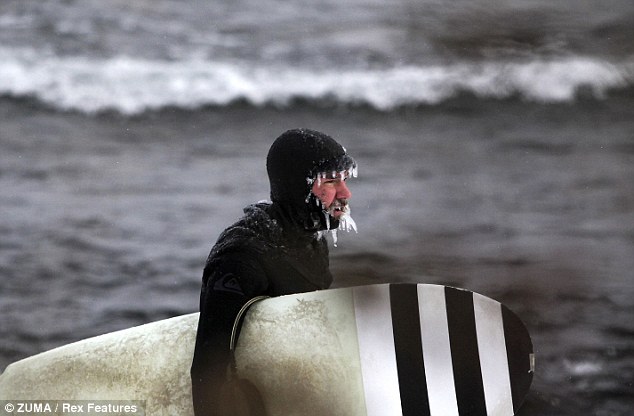 Those who braved the frozen waves did their best to stay warm by moving, though their specially designed wet suits, complete with hoods, gloves and boots, tremendously helped as well 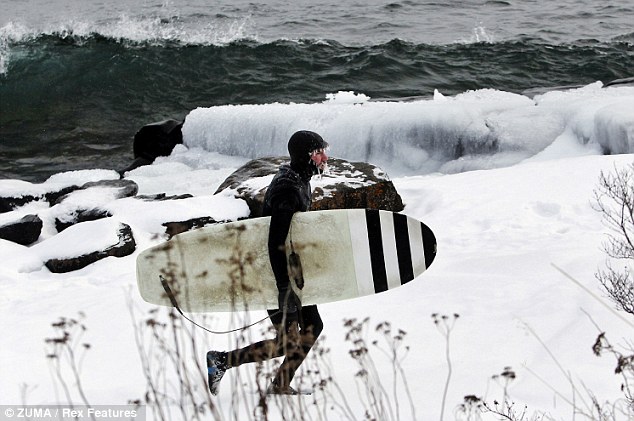 Replacing sand for snow, the surfer trudges across a white powdered beach cuffed on the edges with thick ice

Here in northern Minnesota, where winter temperatures can often be at or below zero-degrees Fahrenheit, the peak season for surfing is now with January to March said to offer the most frequent and ‘cleanest’ surf.

On Friday the city of Duluth, just south of Stony Point, woke up to temperatures around -15F (-26C) thanks to an arctic-blown chill with winds traveling up to 12mph.

To surfers that means stronger waves.

Matt Nelson of Two Harbors, MN who said he only began surfing last spring was one of them on Thursday. 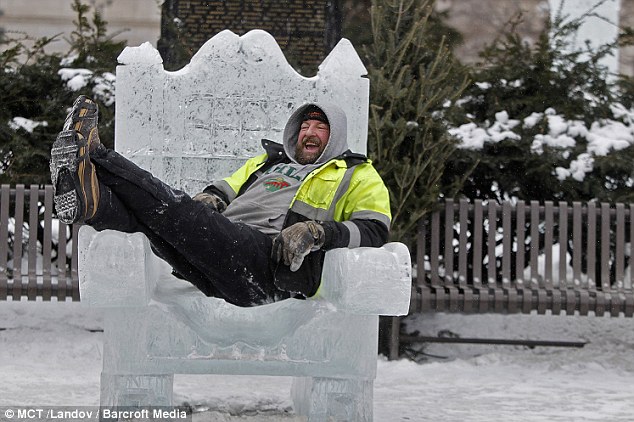 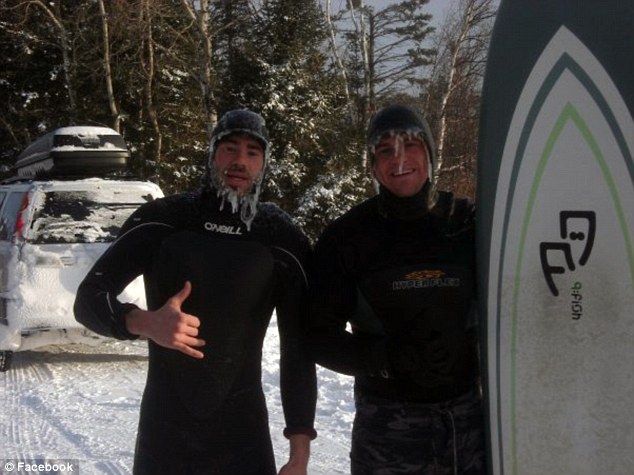 In January of 2009 these two surfers similarly braved icy air, water and beards at Stony Point where they said the water was warmer than the below-freezing air 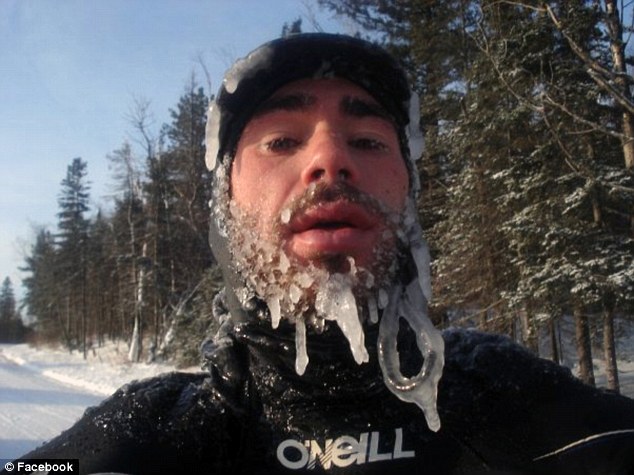 Markus Barasch, an avid surfer from Wisconsin, snapped a photo of his jagged facial hair and wet suit while describing a 30-degree below windchill 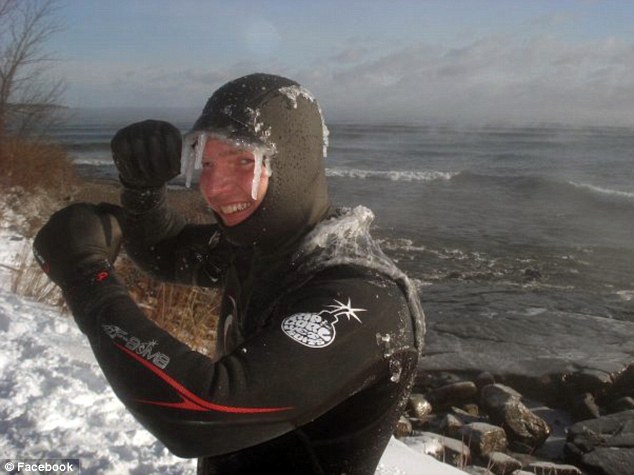 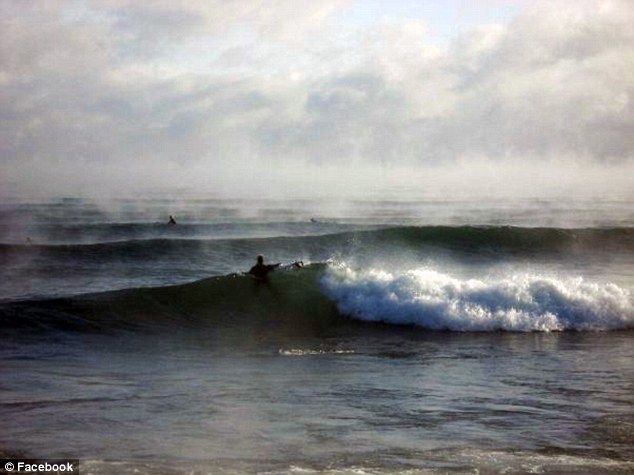 Also nearby, a former-California man who only identified himself as ‘Hollywood’ also put in about two-hours sloshing in and out of the waves.

When he came out, the water had easily frozen into blunt icicles dripping from his hood and facial hair.

But far from any blue lips or skin, their faces appeared rosy, alive, accompanying their bright eyes which scoured for their next big wave.

The St. Paul, Minnesota city council unanimously voted in 2009 to outlaw cartoon character lighters and candy that resembled cigarettes. Unfortunately, a small shop in St. Paul didn’t get the memo and had candy “cigarettes” in stock as well as gum shaped like cigars and chewing tobacco. The candy cigarettes were their biggest sellers. The Star Tribune reported that a city official visited the store a little over a week ago and instructed them to get rid of all the candy that looked like tobacco products:

“Lynden’s, on Hamline Avenue near Cretin-Derham Hall High School, said a city inspections official came in last week and gave the shop a warning and added that a misdemeanor citation — with a $500 fine — would be next if the non carcinogenic confections continue to be sold.”