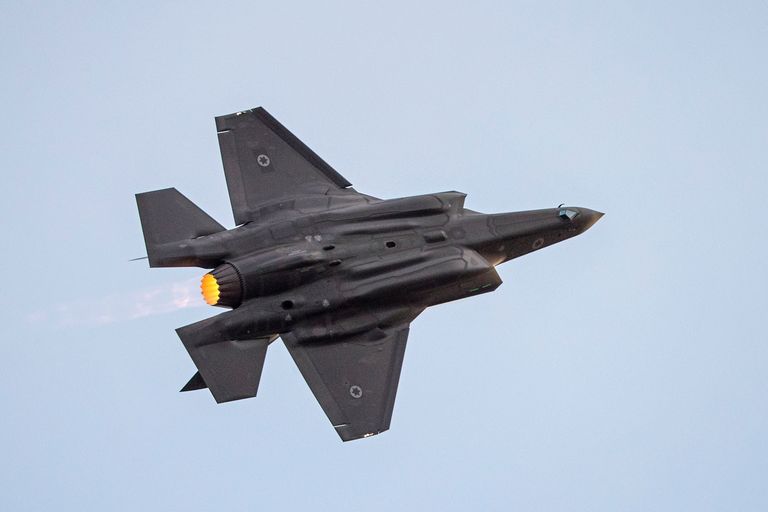 The Israeli Air Force says its F-35A fighters recently participated in two separate air strikes, which would be the first use of the F-35 in combat.

The IAF did not offer much detail, leaving it unclear whether the fighters fired any kind of weaponry or simply acted in some kind of support capacity.

Israeli Air Force head Maj. Gen. Amikam Norkin told participants at a IAF leadership conference, “We are flying the F-35 all over the Middle East. It had become part of our operational capabilities. We are the first to attack using the F-35 in the Middle East and have already attacked twice on different fronts.” According to the Jerusalem Post, Norkin made the remarks while standing in front of a photograph of a F-35 flying over Beirut, Lebanon. END_OF_DOCUMENT_TOKEN_TO_BE_REPLACED

New Documentary film  highlights the persecution of Christians in the Middle East, where almost 1 million have been killed since 2005.

Paula Kweskin, 33, didn’t expect her life to turn out this way — but she’s glad it did.

Kweskin attended law school at the University of North Carolina-Chapel Hill, where she earned a jurisdoctorate in international law in 2010. Her goal from the outset of her higher education pursuit was to help the less fortunate in the world through practicing law.

She soon found out that bureaucracy made that task extremely difficult. So, she focused on other ways to help — specifically, she turned to media.

END_OF_DOCUMENT_TOKEN_TO_BE_REPLACED

The republican “Democracy Project” was on full display in Tuesday night’s debate.

The establishment candidates from Bush to Kasich and Christie all espoused virtually identical views on the Middle East and particularly the handling of Bashir al-Assad in Syria.

But now you count newly crowned establishment wunderkind, Marco Rubio as having the same policy preference. It appears the moderates have all but given up on Jeb and are beginning to line up behind Marco. I’d like to say that Rubio has just recently succumbed to the dark side but I think he’s been there for years.

At first I thought he was towing the establishment line on just immigration, but his foreign policy, at least in regard to the Middle East, has an establishment taste to it.

Save for Israel, there has never been a single democracy in that region’s several thousand year history. Middle Eastern nations have always been a monarchy, a theocracy or dictatorship – nothing even resembling a democracy, let alone a representative republic. END_OF_DOCUMENT_TOKEN_TO_BE_REPLACED

Yesterday Secretary of Defense Ash Carter was on Capital Hill testifying before the Senate Armed Services Committee. Among his many dimwitted quips was: “We won’t hesitate to confront ISIS.”

Now if I were on the Senate panel, I may have fallen out of chair in both laughter and disbelief over what I just heard. All the Obama administration has done since the formation of ISIS is hesitate to confront. Leading from behind is hardly confronting them.

“The United States is prepared to assist the Iraqi army with additional unique capabilities to help them finish the job, including attack helicopters and accompanying advisers” if circumstances dictate the extra assistance and if requested by Prime Minister Haider al-Abadi, Carter said.

His statement was regarding the Iraqi army’s attempt to retake to the city of Ramadi, the capital of Anbar Province. And why does Ramadi need to be retaken? That’s right – back in May ISIS overran the Iraqi forces and took the capital as we “hesitated to confront them.” And frankly, if I were the Iraqi leader, I might approach Putin for support, figuring he would not cut and run at the first sign of “confrontation.” Maybe Ash Carter can order the all new, all female Delta or SEAL Team PINK to assist. That will put the fear of Allah into those ISIS fighters! But that’s a rant for another time. END_OF_DOCUMENT_TOKEN_TO_BE_REPLACED

According to the New York Times, the paper of record don’t cha know, Dr. Ben Carson is utterly clueless, because he said the Chinese were in Syria. What a maroon! (hat tip Bugs Bunny)

Now the first thing I noticed about the New York Times piece is their outright refusal to call Ben Carson doctor. His name was evoked several times in the rather lengthy piece and each time they used Mr., not Dr.

I thought that odd. Could it be that the Times is so threatened by Dr. Carson, a black neurosurgeon, that they felt the need to delegitimize him by demoting him to simply a Mister? Again, I thought this purposeful omission rather curious.

Now, I don’t know if the Chinese are physically in Syria, and frankly neither does anyone else, to be certain. We can assume they are not because no one else has mentioned them, but that doesn’t prove Dr. Carson is ill-informed or lying or both.

The Times begins by writing that, “Ben Carson’s remarks on foreign policy have repeatedly raised questions about his grasp of the subject, but never more seriously than in the past week, when he wrongly asserted that China had intervened militarily in Syria and then failed, on national television, to name the countries he would call on to form a coalition to fight the Islamic State.” Actually, that’s not what he said. And as to the “coalition” question, his answer was simply to lead from the front. Begin an offensive campaign – others will see you’re serious and follow your lead – and voila – you have a coalition.

Now I’m not a Carson guy, but who is to say the Chinese aren’t there in some form or another. Are we to take only the word of the “experts” in the Obama administration – you know – the same ones who insist there is no threat of ISIS within the mass “refugee” infiltration into the United States? You mean those guys. END_OF_DOCUMENT_TOKEN_TO_BE_REPLACED

So you say you need a job. Maybe you’re one of the over 93 million unemployed Americans. And to add to that misery, you don’t have a ton of marketable skills. Perhaps you’re just starting out – willing to start at ground level and work your way up the ladder.

You’ve applied everywhere and still nothing. Well, maybe it’s time to expand your horizons – expand your job search area – perhaps even overseas. Heck, you say anything would be better than your current situation.

Well buck up – for there is a country who is hiring. So far, there are only eight job openings, but these jobs require no schooling and no experience. One hint though: if, as a kid, you grew up playing with toy swords, that may be a plus.

See, Saudi Arabia is currently advertising for eight new executioners. The executioner duties are to dispense justice as directed by the Saudi Sharia courts. Specific duties will be amputations and beheadings. END_OF_DOCUMENT_TOKEN_TO_BE_REPLACED

The only plausible explanation for many actions taken by President Obama and his administration is that they are working counter to the security of the United States of America. How else can one rationalize the following:

1. The unilateral release of five senior Taliban back to the enemy while the enemy is still fighting us.

There are several major earth moving news stories happening simultaneously – the ongoing saga between Russia and Ukraine – the Israeli, Hamas battle in Gaza, which may escalate into a two front conflict. It seems Fatah in the West Bank is moving closer to aligning permanently with Hamas, which will surely mean stepped-up assaults by terrorists on Israel from both Gaza and the West Bank.

The self-proclaimed Islamic state is expanding and has declared war on everyone – Christians, Jews and Muslims alike.

Meanwhile in Africa, more and more territory is being plagued by increased outbreaks of the Ebola virus. It appears to be uncontained and spreading.

And there is, of course, the perpetual chaos at our southern border.

All in all, it seems the world is coming apart around us.

I find myself longing for the good old days, when our greatest concern was containing strong-arm dictators from attacking their neighbors. END_OF_DOCUMENT_TOKEN_TO_BE_REPLACED

The news has made headlines all over the country and not just in the sports world. Basketball great LeBron James is going home – back to Cleveland, where it all began.

Yes, of course it’s the lead story on all 52 ESPN channels. That’s to be expected, but they’ve been discussing it nonstop on the NFL network, the network dedicated exclusively to football. No not fútbol… football. You know, the real man’s sport. Yeah, that’s a little dig at all you dopey FIFA fans.

So, I ask you – what’s bigger, more important, more newsworthy than LeBron? Evidently nothing.

The Twitterverse just exploded over the news. Tweets blasting out – columns hurriedly written in order to be the first to announce this earth shattering news.

No more attention has been paid than to this announcement.

Not the ever deepening V.A. scandal, where it’s been discovered that tens of millions of dollars in “merit” bonuses and overpayments were paid for clearing up the backlog by effectively killing off our heroes in desperate need of treatment. Everyone but the veterans benefited – down to lowly clerks and support staff.

But that’s not bigger than LeBron. END_OF_DOCUMENT_TOKEN_TO_BE_REPLACED

Liberals hate Israel. We all know that. They do so because the dopes on the left, Wordwide, have bought into the myth that Israel is oppressive and is the single source of all that is wrong in the middle east. They are the sole source of misery to the poor Palestinians; those dirty Jews, stealing their homeland. Taking by force what is rightfully the Palestinians’.

Everyone hates Israel. Maybe even more than conservatives, if that’s possible. I suppose it is, being that conservatives are but the enemy of America and the Jews are evidently the worlds foe.

When asked about anti-Semitism in Europe, Soros, who is Jewish, said European anti-Semitism is the result of the policies of Israel and the United States.

So let’s see if this is right. Jews are so evil that they themselves, cause anti-semitism.

That’s like a rapist saying she deserved it because she was dressed a certain way and everyone agreeing.

Oh, and as usual, it’s also the fault of the United States. Why? Our policies. What policies, you may ask? Well, it doesn’t matter, because no one will ever ask Mr. Soros which American policies cause the hatred of the Jews and Israel. I guess just being known as a ally is reason enough. END_OF_DOCUMENT_TOKEN_TO_BE_REPLACED