Hot Air writes: “What do former President Barack Obama, Prince Harry, Leonardo DiCaprio, and Katy Perry have in common? All of them are famous, extremely wealthy, and environmental scolds. They talk a big game about saving the planet and fighting global warming but then they travel to Google Camp and just like that, their hypocrisy is exposed.”

Yes – climate change virtue signalers show up at the lavish Google Camp in private jets and mega-yachts to discuss how the rest of us should be more responsible, yet can’t seem to see the irony in their own actions.

Michael Moore says Michelle Obama should run for President. I beg to differ. I discuss that whether she should or not is immaterial. She won’t run and I’ll explain why. END_OF_DOCUMENT_TOKEN_TO_BE_REPLACED

A few days ago, Rush Limbaugh, on his radio program, was discussing a theory that Michelle Obama

may be thinking about throwing her hat into the presidential ring. He discussed how it might happen and why.

Personally, I don’t think there’s any way this will happen. I’ll give a quick thought on this later in the column.

But I’d rather speak of the few current front-runners – Bernie Sanders, Joe Biden and Kamala Harris. All have issues that should disqualify them from even consideration by the leftist base. Yet it continues to be a fascination how the democrats are so easily able to suspend their own identity politics and support two old white guys and the descendant of a slave owner. END_OF_DOCUMENT_TOKEN_TO_BE_REPLACED

Can you feel it? Can you feel the disturbance in the force – the dark side? Yes, the Democrat party is beginning to descend into panic mode. Oh sure, like in the antiperspirant ads, they’re not going to allow us to see them sweat, but the Democrat kingmakers have to be closing in on desperation.

They are running out of time, and as has been said, they have no bench – no one to go to if Hillary falters. From the beginning, it was apparently Hillary Clinton or bust.

Now those on both sides have concluded that Hillary will probably not make it to the finish line. And to this I say, welcome aboard. Not to toot my own horn, but regular readers know I have been predicting the inevitable downfall of Clinton from almost day one.

It’s taken some time and a lot of scandal, and she still may whether this, but I’ll stand by my original assessment and say, she will not be the Democrat candidate.

See, Hillary now has two problems. Originally, it was that she is almost universally disliked. Unlike her husband, who everyone knows is a bag of dirt, but still inexplicably likable, she is the polar opposite of Bill. No one likes Hillary. Sure, she has her loyal supporters and backers, but that doesn’t mean they like her. END_OF_DOCUMENT_TOKEN_TO_BE_REPLACED

This episodes discussion regards the EPA and their new fuel standards for the trucking industry. No one is safe from the slimy tentacles of the enviro-nazis. Also, it’s good news for pot smokers – or is it. Cannabis won’t harm your health provided you follow the guidelines. And the Queen of the United States takes a trip to Venice. Wait until you hear how much you paid and what the Italians had to go through.  END_OF_DOCUMENT_TOKEN_TO_BE_REPLACED

On today’s episode I discuss the new revelations regarding the deserter Bowe Bergdahl and the Taliban Five – Yet another ridiculous gender/orientation classification – Rick Santorum is running for president again and says we’re fighting a politically correct war & watch out kids; Michelle Obama’s school lunch program you all hated is hitting the road in the form of summer lunch trucks and they’re looking for you!   END_OF_DOCUMENT_TOKEN_TO_BE_REPLACED

LAKEWOOD, Colo – School officials in Jefferson County, Colorado felt like they had to do something to save the school’s lunch program after a significant drop in participation last year because of new federal regulations championed by First Lady Michelle Obama.

“I was very excited to hear that,” she told the news station, adding that she gets her food from the cafeteria because “I don’t have to make my lunch.” END_OF_DOCUMENT_TOKEN_TO_BE_REPLACED

by: the Common Constitutionalist:

My kids and I were watching some silly program on cartoon network the other night. Let me rephrase that accurately. They were watching as I suffered through – but hey – I’m a dad, and that’s what we do.

During the program, the inevitable commercials began to air. As the first one came up, my son exclaimed, “Oh look, McDonald’s sells apples of milk – and that’s it.” To that his brother said, “Yeah, they don’t sell hamburgers anymore. Stupid government.”

Gee, that was like looking in a mirror. Wonder where they learned that?

Well this began a discussion of the school lunch/snack programs. It seems new government guidelines were instituted and the kids are none too happy. One of my sons said he doesn’t know a single kid that isn’t angry over the “healthy food” changes. He said, “Dad, it’s ridiculous. They used to have pop tarts in the cafeteria.” He likes pop tarts. “This year – nothing. They took them out.”

I asked him what him and his friends do now. He said that when they have some free time during the day, they walk a couple blocks to the convenience store. “Guess what”, he said. “They sell pop tarts”. END_OF_DOCUMENT_TOKEN_TO_BE_REPLACED

Middle East and North America photo manager for the Agence France-Presse Patrick Baz said in a tweet that he had seen the #bringbackourhumvee meme on websites and twitter accounts supporting terrorist group Islamic State of Iraq and Syria (ISIS).

The hashtag is a play on the #bringbackourgirls campaign to rescue the 276 Nigerian girls being held captive in Nigeria by Islamic militant group Boko Haram. 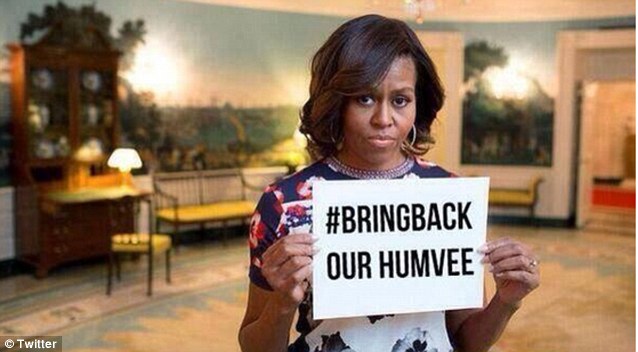 END_OF_DOCUMENT_TOKEN_TO_BE_REPLACED

Yes, prepare the kingdom for the coronation of the new monarch of the moderates.

Chris Christie won big in New Jersey and now has his sights firmly set on the White House.

He won in a liberal state with the backing of the Republican Party and Chamber of Commerce, none of which he needed to defeat a weak Democrat with virtually no party support.

It’s almost as if the Democrats wanted Christie to win.

At the same time the Republicans spent very little to help the conservative Ken Cuccinelli in Virginia. And the Chamber of Commerce; how much did they spend on the Cuccinelli campaign? Zip!

So why on earth would the Libs want Christie to win? Heck, Obama even called to congratulate Christie, you know, cause they are such good buddies. Frankly, I’m half surprised Obama didn’t join Christie on the campaign trail. END_OF_DOCUMENT_TOKEN_TO_BE_REPLACED