In the aftermath of the Las Vegas massacre, it took only a matter of hours before the left sought to divide us, howling for gun

The overarching agenda of the progressive left, since its rise to prominence in the early 20th century, was/is to chip away at and eventually supplant the Constitution and the Declaration of Independence with their version of America. And they will seize any opportunity do so, regardless of how tasteless. END_OF_DOCUMENT_TOKEN_TO_BE_REPLACED

We don’t even have a full accounting of what happened in Las Vegas, or even what motivated this sick individual. But no matter – the gun control nuts came out almost immediately blaming the NRA and anyone who advocates for the Second Amendment and gun ownership. If after this you still think guns are not the problem, you must just want people to die.

Before the blood was even dry in Las Vegas, Democrats from coast to coast were pushing gun control. Hillary Clinton led the charge, finding time between fainting spells to tweet “Our grief isn’t enough. We can and must put politics aside, stand up to the NRA, and work together to try to stop this from happening again.” (Translation: “Put your politics aside… and accep

t my politics! Oh, and my grief is never enough because I don’t feel any.”) But I guess, taking Rahm Emanuel’s counsel, leftists “never let a serious crisis go to waste.”

The waste, though, is that we’re even talking about this in a tragedy’s wake. But since the attacks have been launched, let’s discuss guns.

To use a twist on a Frédéric Bastiat line, the bad social analyst confines himself to the visible effect; the good social analyst considers not just the effects that can be seen, but those largely invisible and those that must be foreseen. Events such as Sunday’s massacre by murderer Stephen Paddock cannot be missed; they’re horrible, headline-making tragedies.

END_OF_DOCUMENT_TOKEN_TO_BE_REPLACED

It’s now been three days after the worst mass shooting in modern U.S. history. And still we seem to know little about the shooter,

Stephen Paddock. Frankly the only thing we do know is that the people who seemed to know him best, like his family, were shocked at his obvious turn to the dark side. He has been described as standoffish, but that doesn’t make him a lunatic.

We know he was a real estate investor – appeared to be well-off financially. According to relatives he was worth about $2 million. Paddock owned houses in four states and was evidently not known by law enforcement in any of them.

His brother Eric said he was not political, nor religious. He owned guns, but according to Eric, he saw nothing like the one’s used during the massacre. He also said that despite his brother’s four homes, Stephen, the gambler, would stay at Casino hotels for up to four months at a time.

“In the final years of his life, Stephen Paddock was living out his retirement in quiet obscurity. He liked country music, relatives said, and went to concerts like the Route 91 Harvest festival where he killed so many Sunday night,” writes the Washington Post.

This one is a real head-scratcher. From what any of us have learned thus far, there appears to be literally no motivation for him to do what he did. END_OF_DOCUMENT_TOKEN_TO_BE_REPLACED

Circus performer Igor Zaripov has jaws so strong he can pull a bus using only his teeth.

The 30-year-old, dubbed ‘Mouth of Steel’, holds three world records including pulling the heaviest road vehicle by the teeth – a 12,360kg double-decker bus.

He also holds the record for the fastest time to pull a car 100ft with teeth, in 15.7 seconds. While his third record is for suspending himself by the teeth for two minutes and 32 seconds. 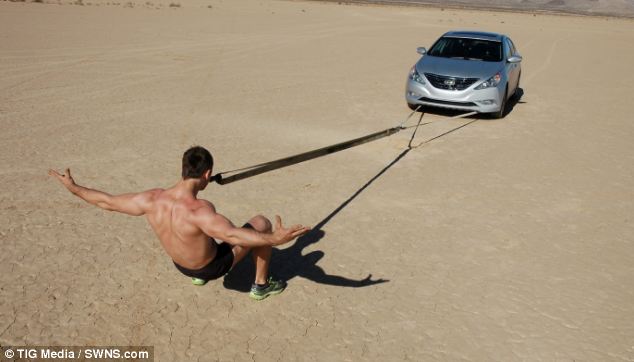 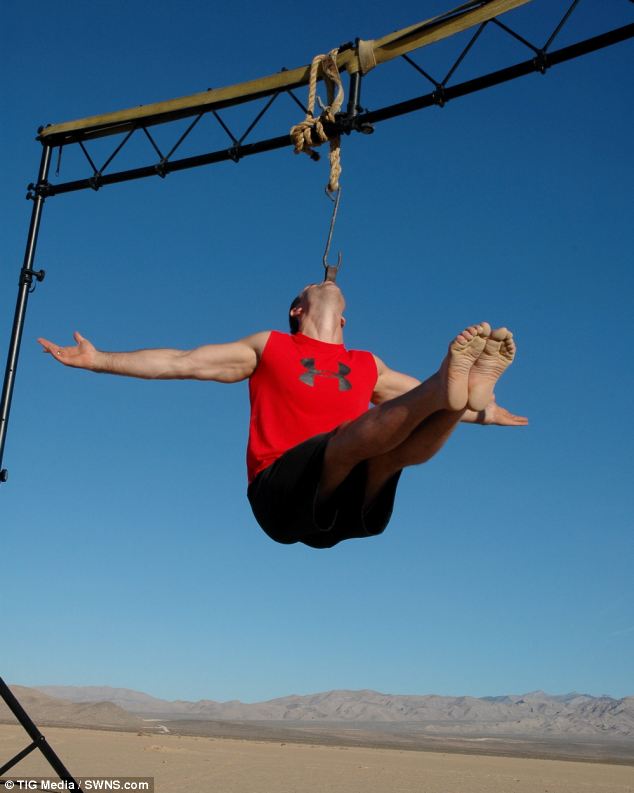 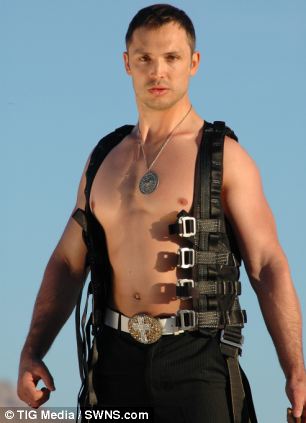 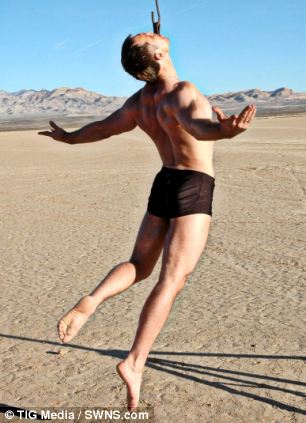 Mr Zaripov has been nicknamed a real-life Superman

The Russian, who now lives in Las Vegas, prepares by speaking only his mother tongue on the day he performs, because he believes it makes his jaws more powerful.

He said: ‘When I do my stunts, I only speak Russian. I think it makes me stronger. I feel powerful, like I can take on the world.’

Mr Zaripov works for Cirque Du Soleil and is from a long line of circus performers, who can trace their performing roots back to 1893, when his great-great grandparents mesmerized the last Tsar with death-defying acrobatics. 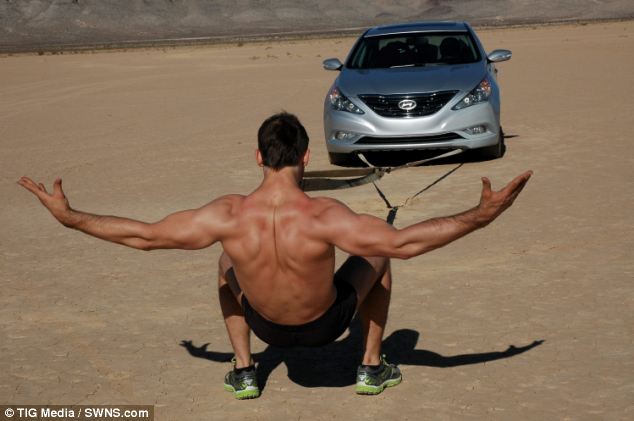 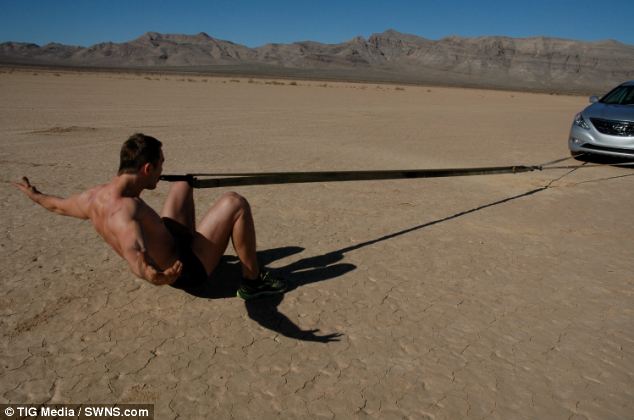 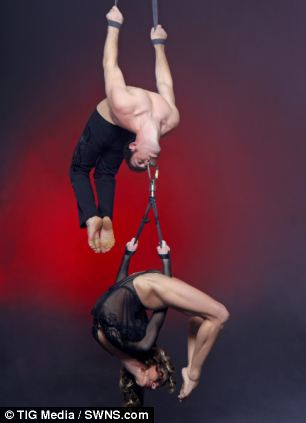 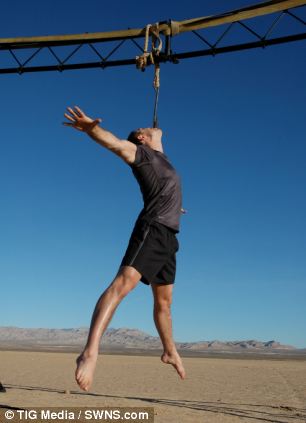 Mr Zaripov is a member of the Cirque du Soleil and has his own fitness program, Czar Fitness

He has even developed his own fitness program, Czar Fitness, to help others boost their bodies and minds using his unique brand of coaching.

He said: ‘We’re all here together, trying to do the same thing – trying to stay positive, trying to eat healthy, and trying to get the exercise in.

‘It’s not always easy but a wise person has said that ‘nothing that is important is ever easy’.

‘I feel this is one of my many purposes – to help others through what I have learnt and what I am continuing to learn daily.’

Throughout history, dogs have constantly impressed humans with their intelligence.

From guiding blind people around to sniffing out criminals, they are able to turn to a variety of tasks with ease.

And as these astonishing pictures show, two-year-old Arbor is following in that proud tradition. 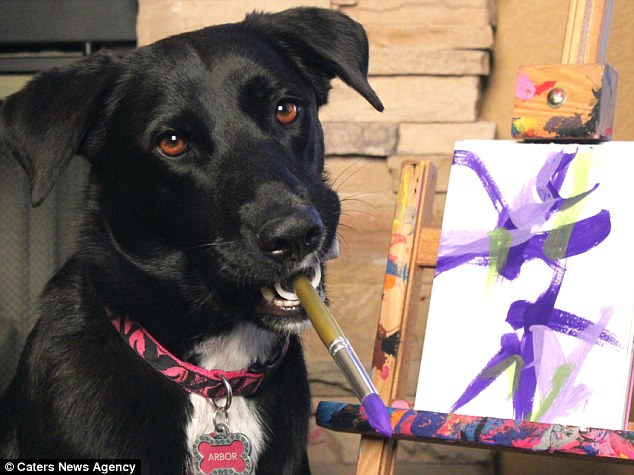 The pet – which was rescued from the streets of Las Vegas by an animal shelter – is a talented painter – with some of her work fetching nearly $450 each.

Bryce and Jennifer Henderson decided to take Arbor in from the animal shelter – but they had no idea they were adopting a canine artist.

Mr Henderson said: ‘When we tell people our dog paints, you can tell many of them don’t quite grasp the concept.

‘They think she uses her paw or her tail, then we show them video of her painting in action and their jaws drop and they say “Oh my gosh, your dog paints”. 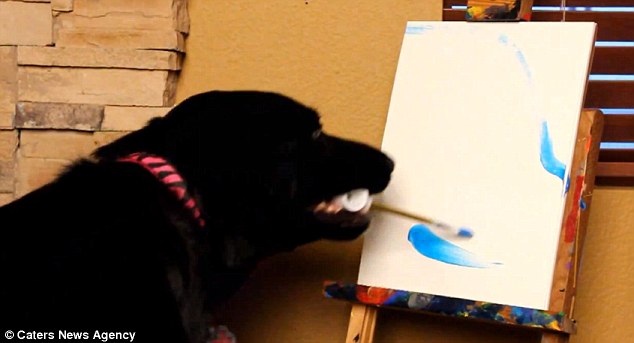 After being rescued from streets of Las Vegas, Arbor has gone on to astound her owners with her astonishing talents. She is pictured starting out on one of her creations 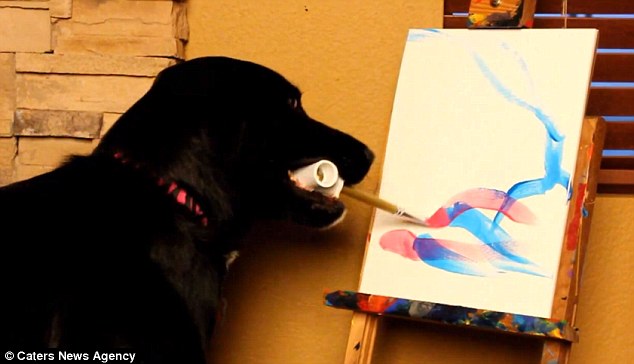 ‘Neither one of us are artists so we had to learn about the craft as Arbor became interested in it.

‘We were just looking for a companion and had no idea how much Arbor would change our lives.

‘We saw right away how intelligent Arbor was, picking up tricks with ease and mastering them. My wife decided to try something a little more challenging, painting.

‘With lots of positive reinforcement she learned to take the brush in her mouth, walk to the canvas and brush back and forth at just the right distance to make beautiful strokes.

‘Since then she has only improved, becoming more creative with her strokes and picking up the brush on her own.’

Arbor has since performed live on television and before audiences at fundraising events. She even painted in front of the Bellagio Hotel in Las Vegas. 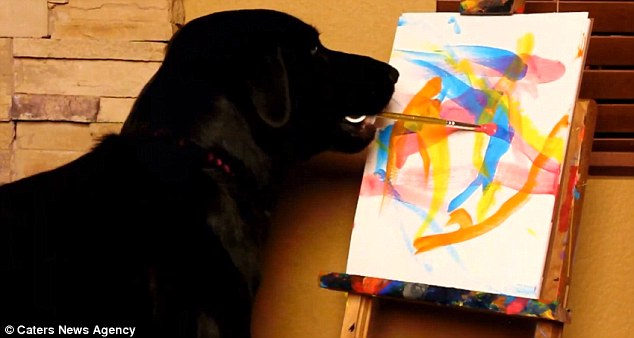 The former homeless pup has learned to take the brush in her mouth, walk to the canvas and brush back and forth at just the right distance to make beautiful strokes 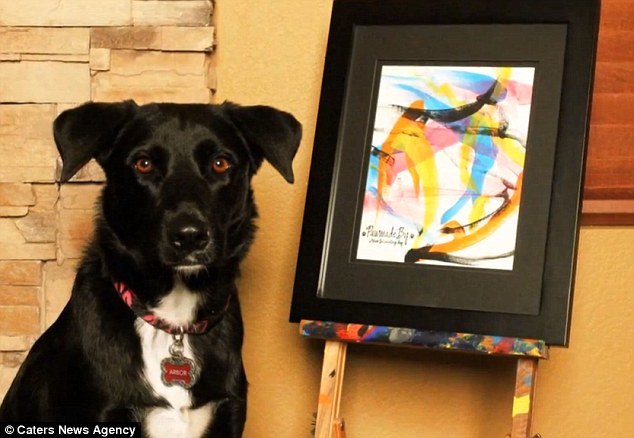 Arbor is pictured with a completed painting

Mr Henderson said the money from Arbor’s paintings goes towards helping other animals in need.

‘Arbor sells most of her paintings to raise money for animals in need across the country.

‘Her highest selling painting fetched $453  with 100 percent of the net proceeds going to an animal charity in North Carolina. We sell most of her paintings via eBay, in an auction format.

‘It takes her about 10-15 minutes to complete a piece. Although she loves painting she only creates a piece once a month.’