Jupiter is a gigantic ball of churning gas clouds, and that makes it hard to see what’s in the middle. It’s believed to be a relatively small, rocky core, but data from the Juno probe found that it’s less dense and more spread out than expected. Now, astronomers believe they have an answer – a huge ancient planet, with 10 times the mass of Earth, crashed into the gas giant in the early days of the solar system. END_OF_DOCUMENT_TOKEN_TO_BE_REPLACED

Jupiter’s Great Red Spot – an enormous  tempest raging on the side of the planet – was expected to dissipate rapidly,  but hundreds of years on, it is still one of the solar system’s most  recognizable and mysterious features.

Scientists were unsure why the giant spot has  prevailed, but now a team of U.S. researchers believe they have solved the  mystery, using computer models.

They think the vertical motion of the gases  holds the key to the Great Red Spot’s persistence by restoring part of its lost  energy. 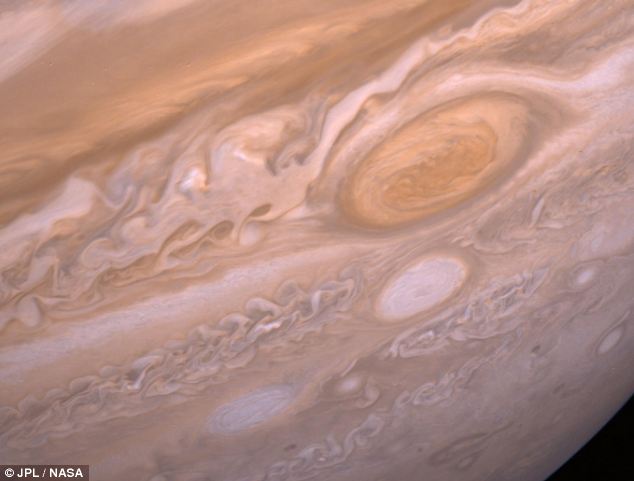 The giant storm on the surface of Jupiter (pictured)  should have disappeared centuries ago, based on scientists’ understanding of  fluid dynamics. The turbulence and waves in the Red Spot sap the energy of its  winds and it loses more energy by radiating heat END_OF_DOCUMENT_TOKEN_TO_BE_REPLACED