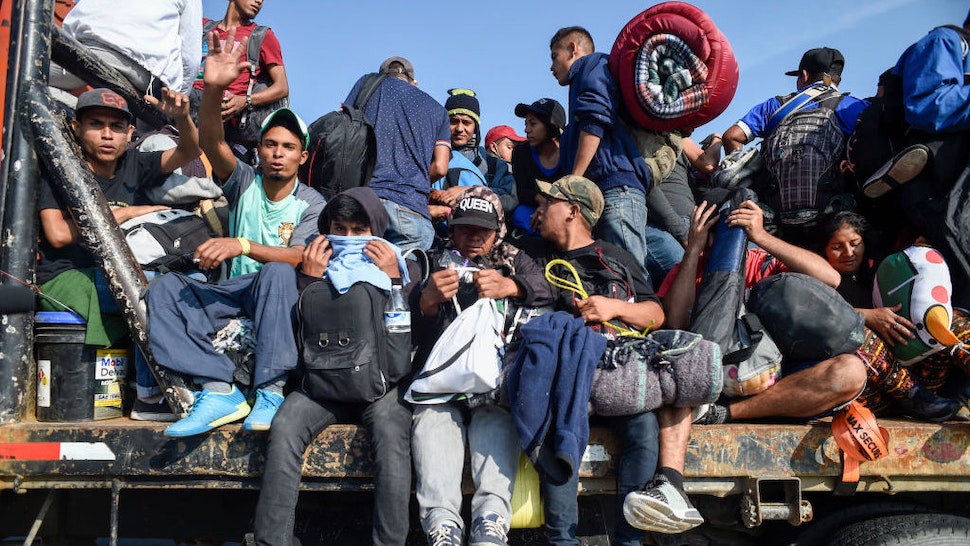 END_OF_DOCUMENT_TOKEN_TO_BE_REPLACED

How is this even a thing – the fact that we would even consider counted illegal aliens for Congressional redistricting.

And the fact that the Supremes just tossed the democrat appeal instead of just ruling that illegal immigrants, are by their name, illegal, and should not be in the country, which means they can’t be counted for anything and anytime.

So, while this is good news, it ain’t great news.

While democrats like Rep. Joaquin Castro (D-Texas) are concerned with ridding us of the term “illegal alien,” here’s what’s happening in the real world.

When James Madison said the jobs of the federal government were “few and defined,” applied “principally on external objects,” he was referring to exactly what has been brought into California from Central America. Yesterday, in what should be the biggest new story of the day, California and federal law enforcement wrapped up an MS-13 task force investigation, completing the indictment of 22 MS-13 members from a particularly brutal cell responsible for numerous gruesome murders. The operation began last year with the arrest of 18 members of MS-13’s “Fulton clique,” culminating with the arrest of the final four in recent days, according to the 78-page indictment. END_OF_DOCUMENT_TOKEN_TO_BE_REPLACED

Mad at university for not addressing ‘hate’ online

Student government officials who threatened to impeach one of their leaders for using the phrase “illegal aliens” have backed off, citing fears for their “safety and wellbeing.”

They are also afraid of being sued for First Amendment violations.

Senators lashed out at Emporia State University administrators Wednesday night for not responding to the “hate” directed at them for the impeachment threat, according to The Bulletin student newspaper. END_OF_DOCUMENT_TOKEN_TO_BE_REPLACED

The subject of birthright citizenship is once again in the news. President Trump says he intends to sign an Executive order ending the practice. Leftists and faux-constitutional scholars are up in arms. What a shock.

CNN writes that, “Such a step would be regarded as an affront to the US Constitution, which was amended 150 years ago to include the words: ‘All persons born or naturalized in the United States and subject to the jurisdiction thereof, are citizens of the United States.’”

In 2015, then candidate Trump exclaimed his desire to deport all illegal aliens. In rebuttal, Robert Tracinski at The Federalist  argued that deporting birthright citizens would be a direct assault on the Constitution and “the thousand year history of English common law.”

Tracinski explained that at the time of the founding, America embraced birthright citizenship – that “for the Founders, rejecting jus soli or birthright citizenship would have meant either greatly restricting the growth and expansion of the new nation or, more likely, creating a system in which there was a large and growing subpopulation of people who were disenfranchised in the land of their own birth. An idea totally incompatible with a government based on the consent of the governed.” END_OF_DOCUMENT_TOKEN_TO_BE_REPLACED

I remember when my kids were little and my wife (now ex-wife) and I both worked. We had to drop the kids off at daycare. For a period of time, one or the other or both, would wail, crying for Mommy and/or Daddy, like we abandoned them. We felt bad – her more than me – but we got over it, knowing we would be reunited with the little tikes at the end of the day.

But what if we had to drop them off, not at daycare, but life-care, with little to no prospect of seeing them ever again? I would say not a chance, as would hopefully the overwhelming majority of parents.

But this is what the left is trying to convince us of – that Honduras, Guatemala and el Salvador have all descended into some sort of Khmer Rouge type killing fields. Central American countries are in fact the murder capitals of the world, but it is not certain death to stay there, as it was by being a Jew in Nazi Germany, or anyone who opposed Stalin or Mao, or Pol Pot, leader of the aforementioned Khmer Rouge. END_OF_DOCUMENT_TOKEN_TO_BE_REPLACED

A University of New Mexico English professor included a pledge on her syllabi to protect and “accommodate” illegal immigrant students who take her courses.

“As an educator, I fully support the rights of undocumented students to an education and to live free from the fear of deportation,” Professor Brenna Gomez wrote on her English Composition II syllabus, in a section labeled “Clean Dream Act Now.”

“As an educator, I fully support the rights of undocumented students to an education and to live free from the fear of deportation.”    Tweet This

“I pledge that I will not disclose the immigration status of any student who shares this information with me unless required by a warrant, and I will work with students who require immigration-related accommodations,” the statement continued.

Where would we be without groups like Judicial Watch (JW)?

thought was free, and open, and transparent, but in fact is not. We’d be living in the Soviet Union, minus the communism, jack boots and food lines.

Regardless of who resides at 1600 Pennsylvania Ave., the Swamp just keeps on doing what they do.

One of President Trump’s major campaign issues was to solve the illegal immigration problem once and for all. And for his part, he’s been doing an admirable job. But he can’t do it all himself, and Judicial Watch has learned that he isn’t get much help from the Swamp.

Just yesterday, it was reported that, “Immigrants entering the United States illegally through the southern border are quietly being relocated to different parts of the country on commercial flights, high-ranking Homeland Security officials told Judicial Watch.” END_OF_DOCUMENT_TOKEN_TO_BE_REPLACED

paired with funding for a wall along the southern US border,” reports The Guardian.

How rude. Doesn’t Trump know that only liberals are permitted to “demand” things? The rest of us are to either shut up or ask politely, then accept whatever Chuck Schumer decides.

This opening statement by the Guardian follows a rather sad photo of a mother and her melancholy child. Although the photo’s caption doesn’t name the two as illegal, this is the obvious inference, as both look Hispanic and are seated in front of sign that reads, “Don’t Separate Families.”

“There are about 700,000 so-called Dreamers [sic], undocumented migrants brought to the US as children. In September. Trump announced that he was rescinding the Deferred Action for Childhood Arrivals program, or Daca, a policy implemented by Barack Obama in 2012 that allowed Dreamers to come out of the shadows to study and work legally in the US. Trump placed the fate of the young immigrants squarely in the hands of Congress, giving lawmakers until 5 March to find a legislative solution.”

Well – where to begin with this load of crap, written in a way to sound like factual, objective reporting. And to anyone unfamiliar, this does sound like legitimate, dispassionate reporting. Unfortunately for us – most will read this as real news. END_OF_DOCUMENT_TOKEN_TO_BE_REPLACED

with the brutal murder of a Maryland woman who was beaten to death and buried in June and unearthed in September.

Maryland authorities discovered the body of 21-year-old Jenni B, Rivera in a shallow grave on the outskirts of Annapolis, the Baltimore Sun reported. The victim was allegedly lured to her death and then beaten by Ervin Figueroa, Brenda Argueta, Ronald Mendez Sosa, Darvin Guerra-Zacarias, and Francisco Ramirez-Pena, all five members of the MS-13 who have immigration detainers on them. Each had varying degrees of participation with two carrying out the actual murder.  END_OF_DOCUMENT_TOKEN_TO_BE_REPLACED