This is just one more example of the genius and prescience of the founders. Just where would be without the Bill of Rights?

Creeping government control is nothing new, but the DOJ’s recent disregard for the Second and Fourth Amendments shows old protections against abuses of power will wear thin without public vigilance.

The Bill of Rights was written for a reason. As the government attempts to violate the rights protected in it in new and different ways, it gives us more reasons to be thankful for its authors’ wisdom.

Last week, we saw another example of this as the Department of Justice (DOJ) tried to violate the Fourth Amendment while stepping on the Second Amendment by demanding that the manufacturer of a rifle scope give the department the names of everyone who downloaded an app connected with the product. Correctly, the manufacturer has refused to do so.

The story almost did not make it into the news: DOJ’s order was supposed to have been sealed, but Thomas Brewster, a cybersecurity reporter for Forbes, was able to view a copy before it was concealed. His story on the DOJ request shed some light on the heavy-handed tactics the government uses in secret to violate the people’s constitutionally protected civil rights. That the order was almost kept hidden from the public also raises the question of how often this has happened before and how many companies have given the feds what they’ve demanded.

The DOJ Is Violating the Bill of Rights

The company in question, American Technologies Network (ATN), manufactures scopes and has developed the Obsidian 4 app. The app allows users to connect the scopes to their phone to better calibrate them. It also allows them to record video and to livestream the view.

Nothing about this violates any federal or state law, and the product is popular. It had more than 10,000 downloads when the story broke last week, and according to the reviews on Google Play, many more people have since downloaded it in protest.

The government’s interest in the app comes because of its investigation into the suspected exporting of the scope to foreign countries. Under the Arms Export Control Act of 1976, the government requires licenses to export arms, which presumably includes accessory items such as scopes. According to the Bureau of Alcohol, Tobacco, Firearms and Explosives, the State and Commerce Departments have some overlapping jurisdiction, depending on the type of weapon. Immigration and Customs Enforcement seems to be the lead agency on this particular action, as a part of its larger “Project Shield America” initiative.

A civil liberties attorney has a problem with two Indiana public high schools. The schools announced that they will randomly drug test 10 students who wish to engage in extracurricular activities, for 10 drugs.

The attorney claims this is a Constitutional violation under the Fourth Amendment.

Surprise, surprise – I agree, because it is and in today’s podcast I explain the reason why. END_OF_DOCUMENT_TOKEN_TO_BE_REPLACED

This is written as the Supreme Court is weighing the constitutionality of ObamaCare – in particular, it is considering whether the federal government has the authority under the 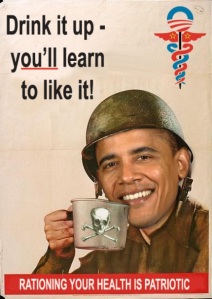 Constitution to force people at gunpoint to buy a health insurance policy from a private, for-profit business. That this is even being – as opposed to dismissed out of hand – tells us just how far down the slippery slope we’ve already slid. But what most people – especially people who support the mandate – may not have considered is where the precedent about to be established will take us.

Unfortunately in law, precedent is everything, because it becomes practice.

Once the courts countenance a given thing, it becomes the basis for countenancing other, similar-in-principle things.  Some 25 years ago, when the courts ruled it was within the government’s constitutional authority to stop motorists at random, without even the pretext of probable cause (as clearly demanded – without qualification – by the Fourth Amendment to the Constitution), a precedent was established. Today, we are subject to random stops – and random searches – at any time, just about. It has become a routine – and routinely accepted – practice. 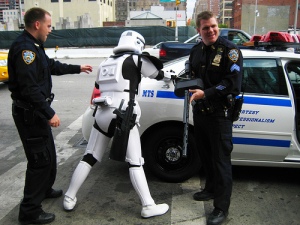 If the government has the authority to force each of us to buy a health insurance policy on the basis of “interstate commerce” or some appeal to the collective greater good – then a new precedent will have been established. Why, having gone that far, would they stop there? Do you imagine the government will stop there?  Has it ever once, having expanded its authority, failed to expand upon that authority?

Why not also force people at gunpoint to buy life insurance?  As things stand, there are families left without a breadwinner – and the breadwinner’s income – following an untimely death. Perhaps some people cannot afford to buy life insurance.  Surely life insurance is just as vital to interstate commerce – and the “security” provided by a policy just as much a “right” as the “right” to health care? Precisely the same arguments can – and will – be used. You are a fool if you don’t see it coming. And it will not come

because of the government’s concern for you. It will come because of the concern over the money (and power) to be had – the two things really driving the individual mandate of Obamacare.

Private (an increasingly meaningless term) businesses have had an epiphany. They have come to realize that it’s in their interests to crawl under the sheets with the government. Because government can force people to buy the businesses’ product or service. Why compete for customers’ dollars when you can use the police power of the state to compel them to hand over the loot? And even better, you (the “private” business) no longer need worry much about quality, efficiency or customer service. After all, what are your customers going to do? They have to buy what you’re selling – or else.

As bad as HMOs and PPOs are – as Soviet and DMV-like as the staff at your doctor’s office may be – at least they cannot put a gun to your head. At least, you have the option of telling them what you think – and walking out the door. Shortly, that may change. And the only thing that will change is the threat of violence for noncompliance. The Soviet and 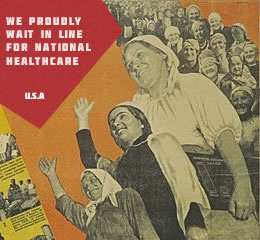 DMV-like experience will be the same – no, it will grow worse. Because you won’t be able to say no – or walk out the door.

Not without the NKVD[People’s Commissariat for Internal Affairs] stepping in to correct you.

And then the precedent will be expanded – and become the general practice.

Life insurance. Home insurance (even if you’ve paid off your home and would rather save the $800 a year that is typically charged). And since this is a car-minded column, let’s not forget cars.

GM and Ford and the rest of them are having a heck of time selling the American consumer on the merits of electric and other “green” cars. Surely, it is in the interests of the furtherance of interstate commerce and the Greater Good that Americans be required 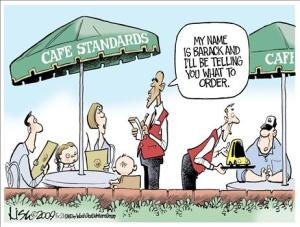 to purchase a “green” vehicle. It would help the car companies. It would be an investment in “our future.” Surely, we cannot afford to allow selfish and irresponsible people to avoid paying their fair share….

I wish this were farce. But if the Supremes hold ObamaCare “constitutional” then we no longer have a Constitution. What we will have is the precedent of unlimited, open-ended federal authority – which in short order will become the routine practice of forcing each of us to do (and buy) literally anything. The flower will have blossomed. America will cease to exist.

But we’ll have “health care.”

And much more besides…