People’s concept of the flying car has shifted over the last five years or so as electric VTOL designs have started to receive a ton of money and attention. But some remain unconvinced, and Greg Brown is vehemently among them. eVTOLs, Brown reckons, will be little more than short-range, low-speed helicopter replacements in the near future. END_OF_DOCUMENT_TOKEN_TO_BE_REPLACED

The flying taxi scene is now a bustling place, but some are moving faster than others. Where some startups have taken years to move past the prototype stage, others are launching right into things. Workhorse first unveiled its Surefly flying car at the Paris Air Show in June last year, and has now sent it into the air with a person inside for the first time. END_OF_DOCUMENT_TOKEN_TO_BE_REPLACED

The flying taxi space has welcomed a lot of newcomers over the past couple of years. But before the likes of Uber, Workhorse and the Volocopter swooped into the scene, Terrafugia had been testing the waters for more than a decade with a variety of flying taxi designs. And this old dog has new tricks in it yet, with a new concept dubbed the TF-2 that features a detachable pod for on-ground transit to and from the launchpad. END_OF_DOCUMENT_TOKEN_TO_BE_REPLACED

Silicon Valley startup Kitty Hawk – backed by Google’s Larry Page, who also threw his weight behind a rotor-based flying car a few years back – has released a video showing off the prototype of an upcoming all-electric personal flying machine it’s calling The Flyer. The company says that users won’t need to secure a pilot’s license to fly the eight rotor vehicle, and promises a swift learning curve. END_OF_DOCUMENT_TOKEN_TO_BE_REPLACED

Jetpack Aviation’s David Mayman and Nelson Tyler have already brought honest-to-god jetpacks out of the pages of science fiction books and onto the market. Now, they plan to do the same with flying cars. We spoke with Mayman at length about Jetpack Aviation’s new manned VTOL multirotor project. END_OF_DOCUMENT_TOKEN_TO_BE_REPLACED

It could be the future of transportation – and is one of most impressive hi-tech toys on the market as well.

A British inventor has unveiled the B – and combined off road remote control car that can turn into a quadcopter and take off.

Witold Mielniczek of the University of Southampton says his invention could even be scaled up to create a full-sized car. 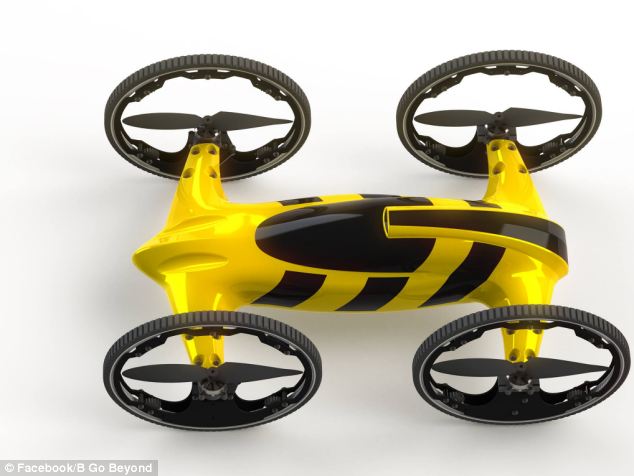 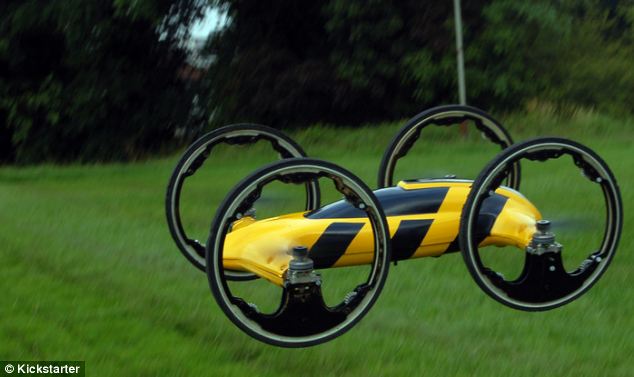 The B in mid-air: The rotors allow it to be controlled exactly like a normal quadcopter

‘B is a revolutionary new remote controlled hybrid car-helicopter with a patent pending design,’ he says on the Kickstarter site set up to fund the project.

‘It is capable of driving across difficult terrain using its large rear drive wheels and when the obstacles become too big, simply take-off and fly over them.’

Prototype cars have already been built, and are able to almost instantly swap from car to quadcopter.

‘B is a toy that provides an extraordinary experience,’ the site claims.

‘B is virtually unstoppable, capable of transitioning between ground and air allowing the development of tricks otherwise impossible to achieve.’

The car also has a HD video camera to send back live footage of its exploits – and luckily for novice pilots has been designed to survive major crashes.

‘The combination of the design and material selection creates a solid construction that is capable of surviving the worst of landings,’ the site says.

‘When the vehicle crashes from high altitudes, the driving rings detach from the housing and can be easily put back together.

‘The main chassis is made out of Polycarbonate, which is the same material used in protective goggles and bullet proof windows.’ 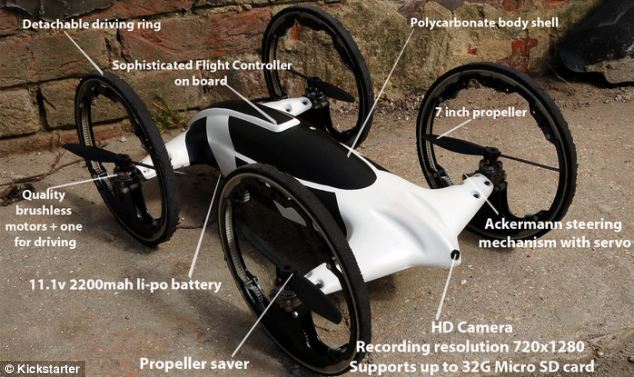 How it works: The B is controlled by an on-board computer, with a HD video camera in its nose and a design its inventors say can survive most crashes 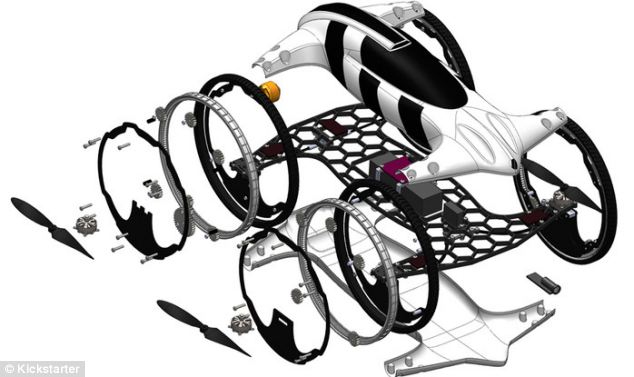 Inside the B: The design is based around a polycarbonate shell to protect the craft from crashes

‘The body shell not only serves as a protective and decorative feature, it is also a structural element.

‘The chassis when combined with the body shell not only forms a rigid and light construction that maintains its shape when flying or driving, but is also flexible enough to absorb excessive forces generated during crash landings.

‘Therefore, you can push B to the limits even when your skills are not at the highest level.

‘This makes B an excellent platform for all users ranging from newcomers to experts. ‘ 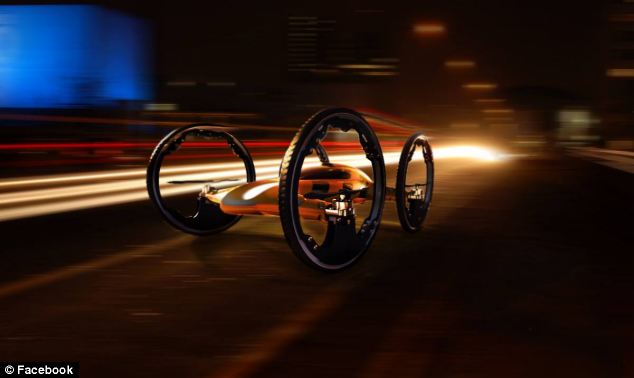 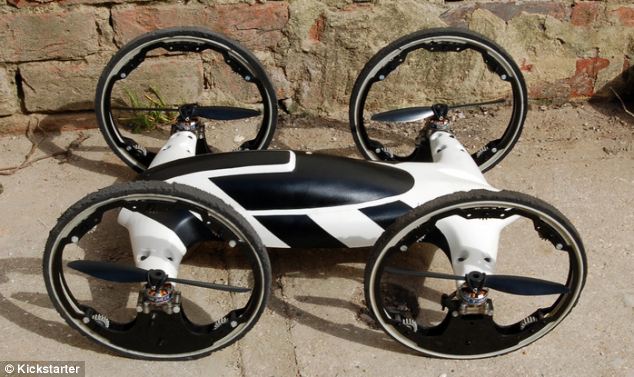