You mean to tell me that draconian lockdowns, shutdowns, business and school closures, depression, isolation & suicide have, it turns out, not been effective?

Horowitz: With no lockdown or mask mandate, Florida has roughly same hospitalization level as 2018 flu season

We should no longer be surprised by the naked authoritarianism practiced by the radical left and their comrades in Academia. But when you read things like this, you still can help but be taken aback.

Thank heavens there are still conservative leaders that refuse to bow before these statists. 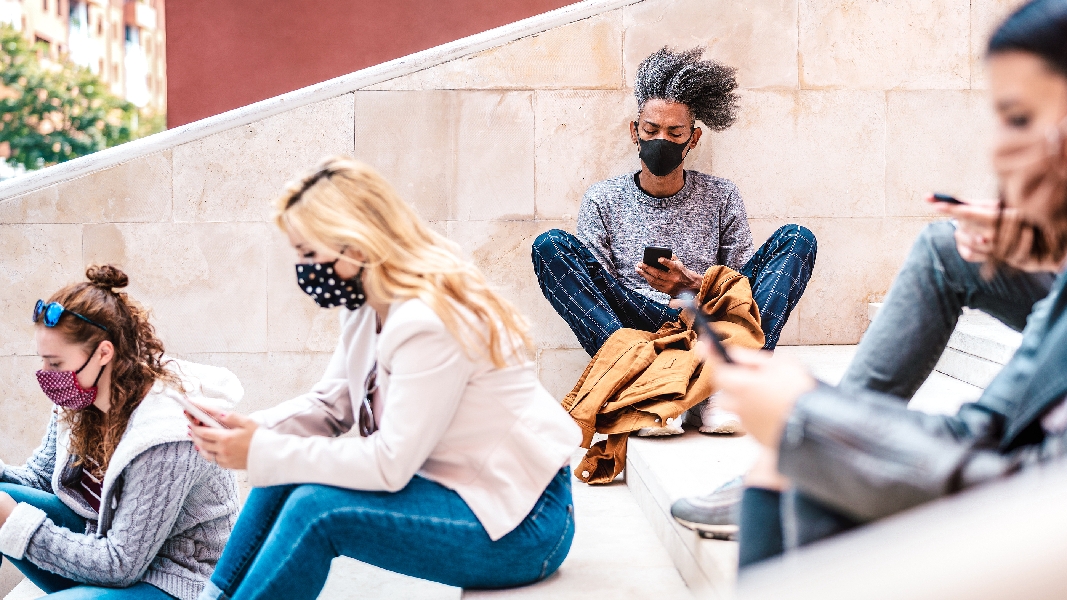 The governor of Florida has proposed a college “bill of rights” that would protect students from 12 public universities in Florida from facing consequences for socializing.
END_OF_DOCUMENT_TOKEN_TO_BE_REPLACED

I’ve actually joked in past about if someone gets hit by a bus, the authorities will count him as a Covid-19 death. I guess it’s not a joke.

And hey – if you can’t believe State bureaucrats, who can you believe?

While Florida listed a man in his 20s as among the state’s COVID-19 fatalities, a county health officer told WOFL-TV that the man died in a motorcycle crash.

The station was looking into records that showed two individuals in their 20s as coronavirus fatalities and asked Orange County Health Officer Dr. Raul Pino if either person had any underlying conditions. END_OF_DOCUMENT_TOKEN_TO_BE_REPLACED

Ain’t this is a funny old world. I discussed this very topic in my most recent video podcast. You may view it here.

communities is a bipartisan goal

In retrospect, Donald Trump locked up the Republican presidential nomination the day he announced his candidacy. In words that will forever be etched in the minds of voters who were captivated by his boldness, Trump came down the escalator at Trump Tower on June 16, 2015, and announced, “The U.S. has become a dumping ground for everybody else’s problems.” He spoke directly to the unspoken concern of millions of Americans when he declared, “When Mexico sends its people, they’re not sending their best. … They’re sending people that have lots of problems, and they’re bringing those problems with us. They’re bringing drugs. They’re bringing crime. They’re rapists. And some, I assume, are good people.” END_OF_DOCUMENT_TOKEN_TO_BE_REPLACED

by Brent Smith at the Common Constitutionalist:

The federal government is planning on dumping up to 1,000 illegal immigrants in two Florida Counties every month. Governor Ron DeSantis had no idea this was going happen. He was given no warning.

I discuss just how wrong this is and how it can possibly still be happening under president Trump.

Democrats are in a panic over several recent State abortion restriction laws.

I discuss the nonsensical arguments of the dems and just why they are in such a panic over an issue they claim is a slam dunk for the left. END_OF_DOCUMENT_TOKEN_TO_BE_REPLACED

A Florida man was traveling South with his family on the way home from a wedding in New Jersey when the Maryland Transportation Authority Police (MTAP) began tailing his Ford Expedition. After about 10 minutes, the police pulled him over and told him they knew he owned a gun. They demanded he produce it for them on the spot — even though the firearm was locked away in a safe 1,000 miles away.

John Filippidis of Hudson, Fla., told The Tampa Tribune he wasn’t speeding or doing anything illegal when the cops took an interest in his car. In fact, he’d intentionally left his Kel-Tec .38 pistol locked up at home precisely because he understood the potential legal headaches that can arise when traveling through multiple State jurisdictions with a firearm. END_OF_DOCUMENT_TOKEN_TO_BE_REPLACED

The gift of a gun may be high on many Floridians’ holiday shopping lists.

The Florida Department of Law Enforcement says it is on target to conduct nearly 1 million background checks this year on private firearm purchases. The projection comes as the department is reporting a record number of reviews conducted over the Thanksgiving weekend that typically kicks off the year-end holiday shopping season.

We have definitely seen an increase in the number of background checks over the past several years,” FDLE spokeswoman Samantha Andrews said Monday.

“You can see November and December are relatively larger” for sales. END_OF_DOCUMENT_TOKEN_TO_BE_REPLACED

Drivers in Florida had to swerve to avoid an  enormous bubbly surprise by the side of the road on Monday  morning.

And now police in Boca Raton are  investigating who committed the age-old prank of pouring entire bottles full of  dish soap into the fountain at the entrance to the Loggers’ Run  neighborhood.

Witnesses described how the joke-gone-wrong  caused the fountains on the waterfall to create a huge foamy mess that grew out  of control as it spread across the road. 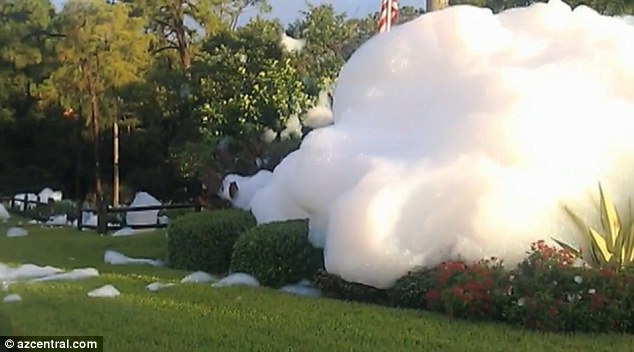 This is the huge soapy bubble that bellowed out  of a fountain in Boca Raton, Florida on Monday

‘I thought maybe it was like fake ice or  something,’ said witness Joyce Seays. ‘But when I got closer, I saw that it was  kind of moving and I was like, ‘nope, it’s soap suds.’

On her way to work when she came across the  huge mess, Seays said that the prankster didn’t even bother to clear away the  evidence when they committed their joke. 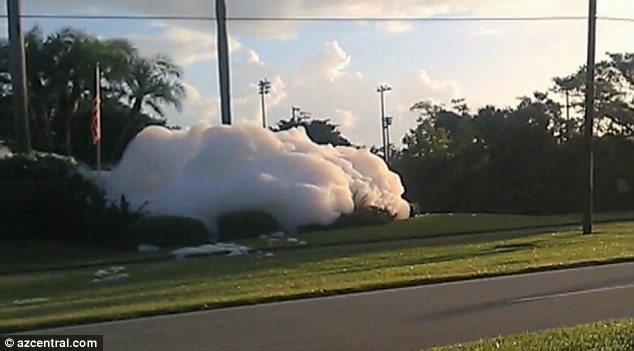 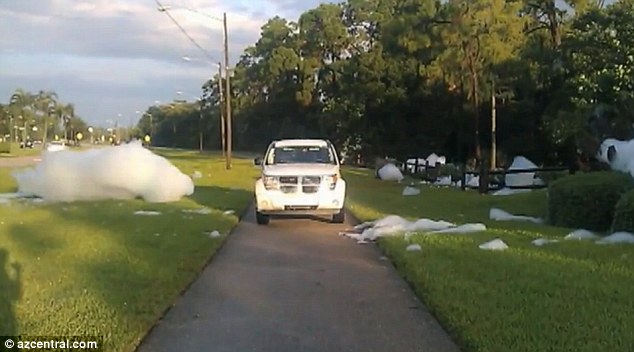 She said that several empty bottles of dish soap could be seen scattered near to the waterfall attached to the  fountain.

Seays also spoke about the potential for an  accident caused by the bubbles. 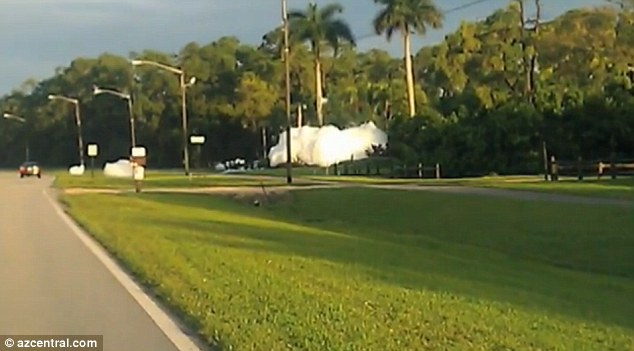 ‘If it would have gone in front of me,  covering my windshield, I would have panicked,’ said Seays.

The bubbles did not just create a road hazard  for several drivers. The prank could also prove expensive to clean up from the  waterfall.

It’s the sort of fantasy world that  children’s dreams are made of.

But as these wonderful pictures show just how  Disney world was built, the dream is definitely a reality. 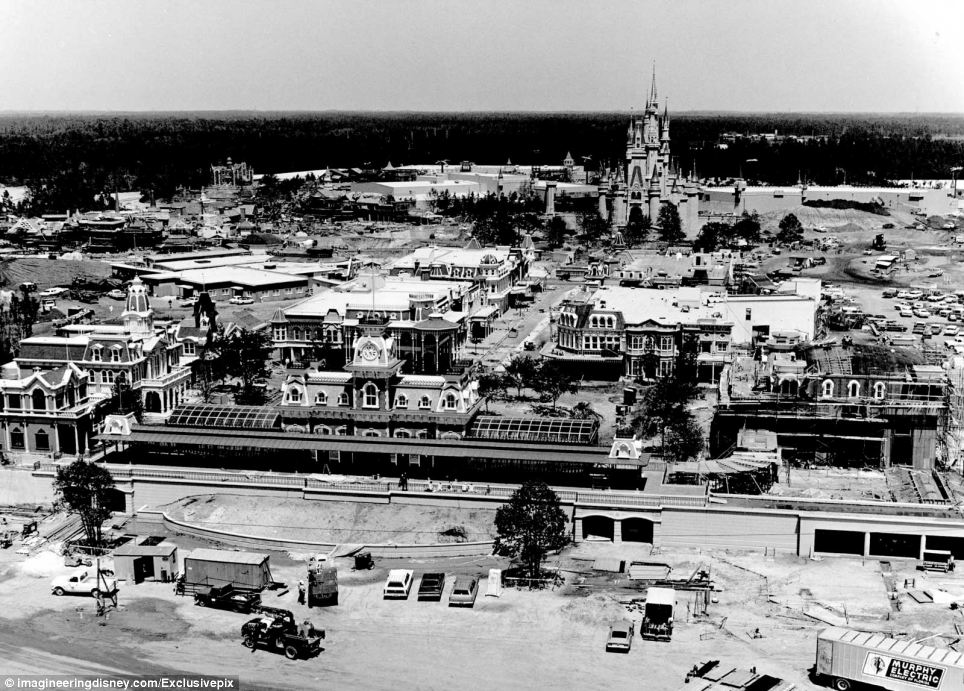 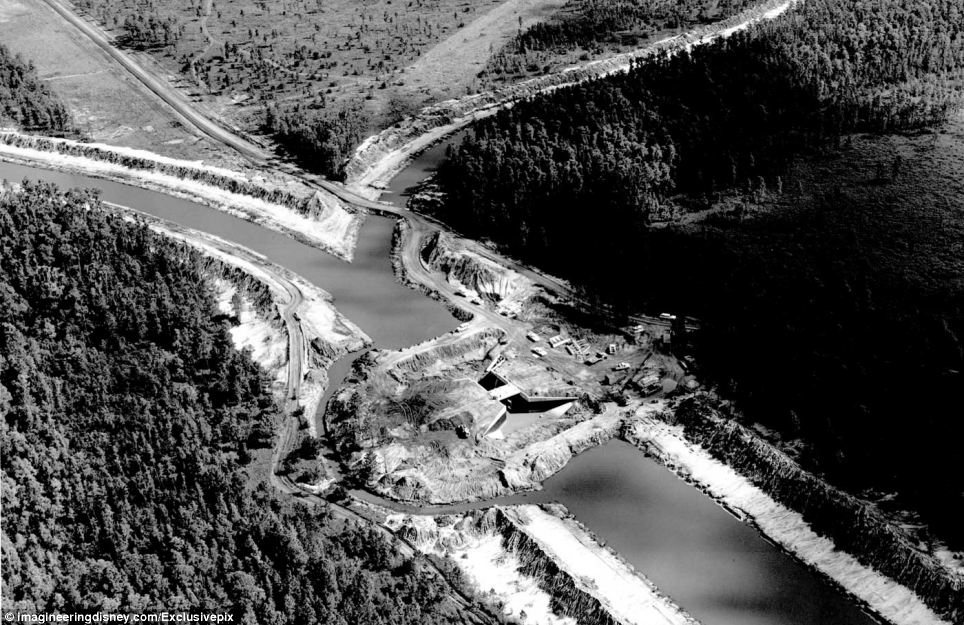 Some 9,000 workers were involved in the two-year  construction effort. They produced an entertainment paradise around lakes,  forests and meadows 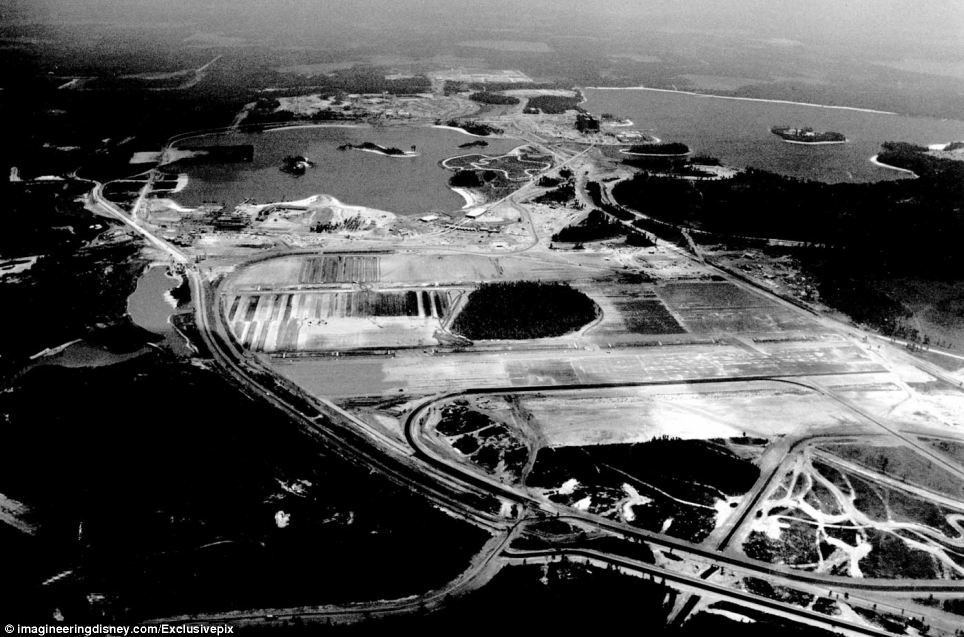 Walt Disney wanted a much larger area than Disneyland’s  450 acres to develop a total resort – and in 1964 the team purchased nearly  28,000 acres from more than 100 property owners 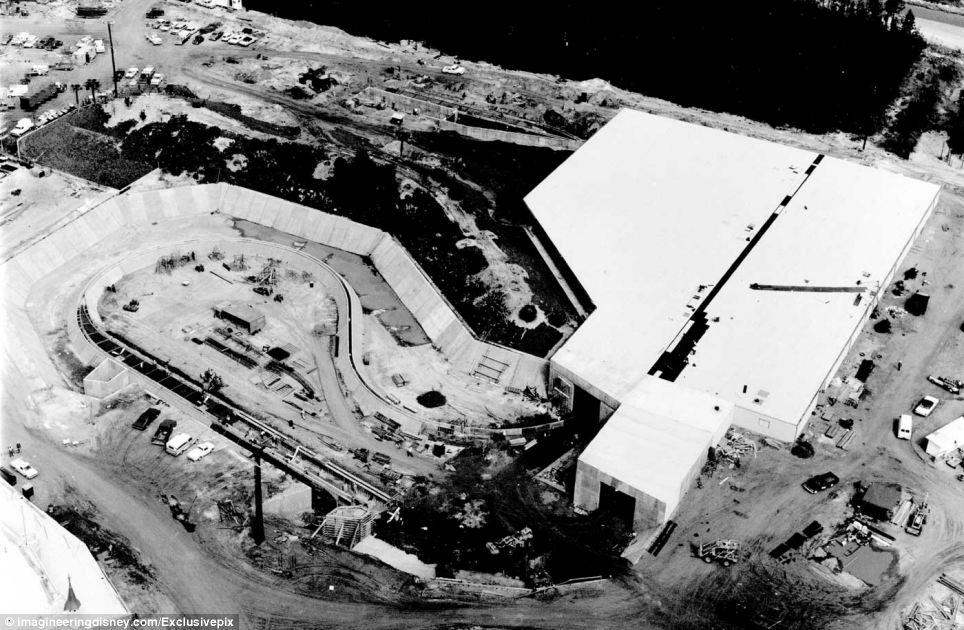 In 1967 a flurry of work began, including the  development of a 45-mile network of water-control channels

And it all began with the Disney founder’s  dream in the early 1960s to provide a kingdom for those is east of the United  States to come and be entertained.

By 1963 the Disney planning team had chosen  Florida because of its clement weather conditions, which meant that the park  could open all-year-round and the state had already been ranked first in tourism  among all states.

Orlando was chosen because of available land  and its prime location at the crossroads of major traffic arteries and dynamic  growth.

In 1965 Walt publicly announced his ambition  to build the unique  entertainment and vacation centre and eventually a way of  life found  nowhere else in the world – this was embodied in his EPCOT centre –  Experimental Prototype Community of Tomorrow. 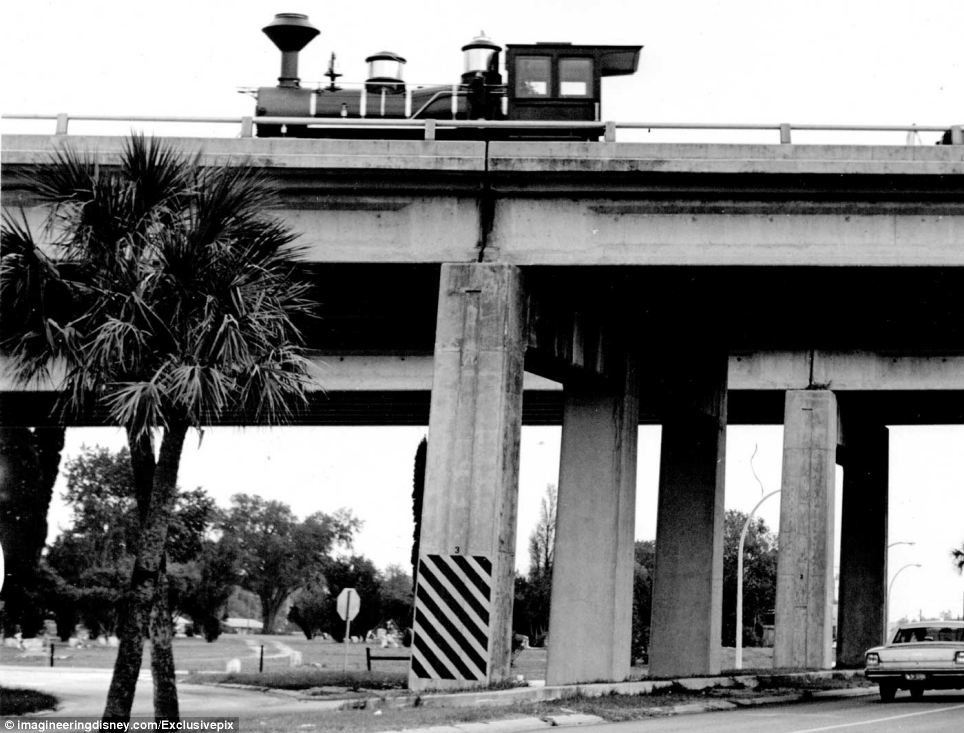 Choo choo! Workers created fantasy lands and even built  an internal infrastructure that meant visitors could travel round the extensive  entertainment complex 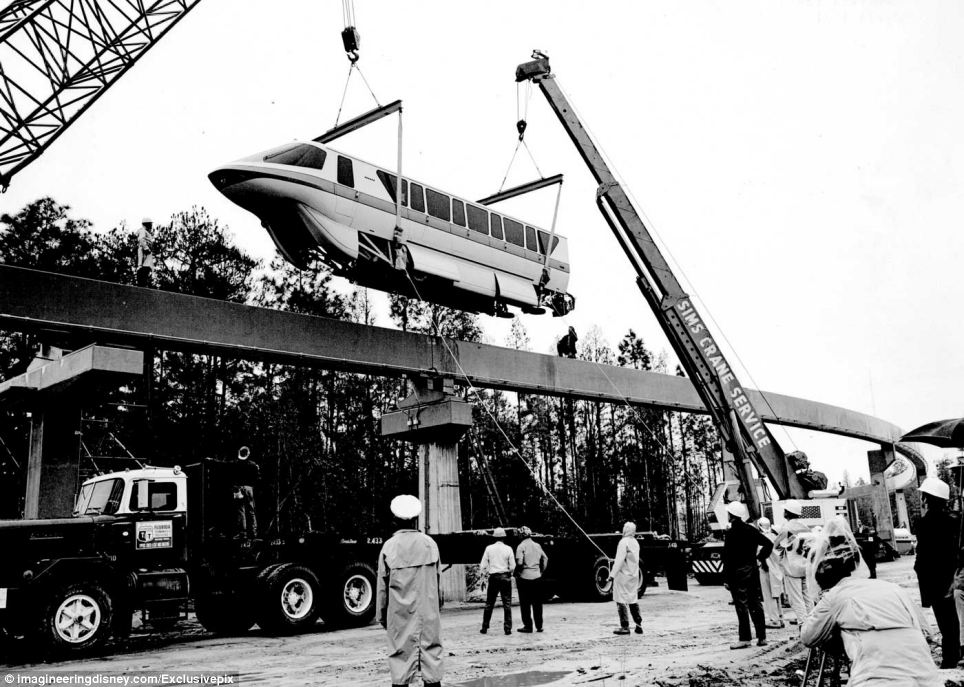 Walt Disney envisioned a sprawling  entertainment complex, and a community that would change the way people  lived 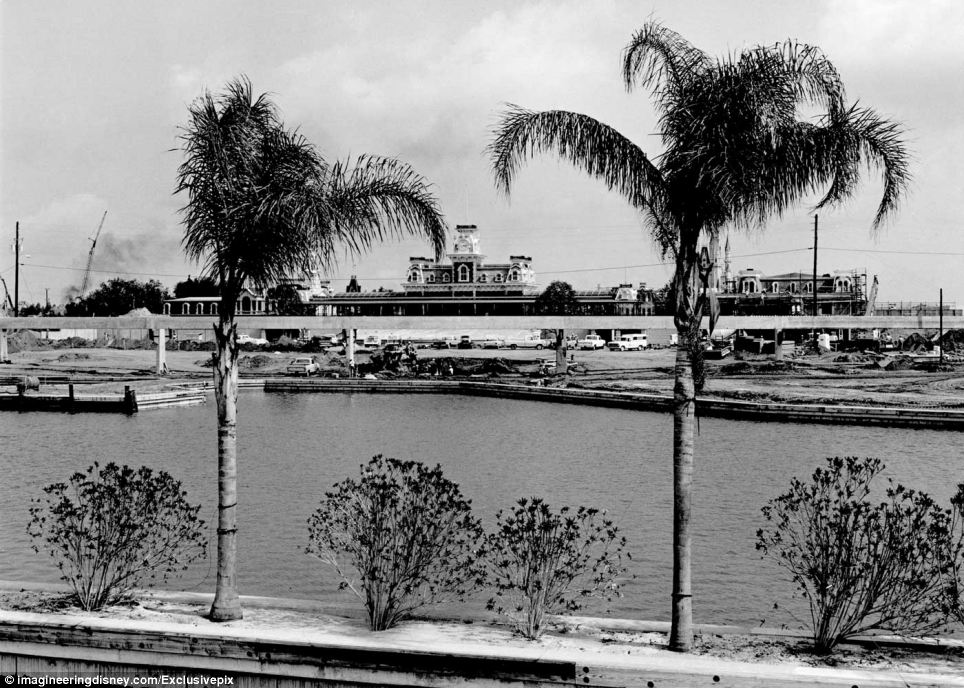 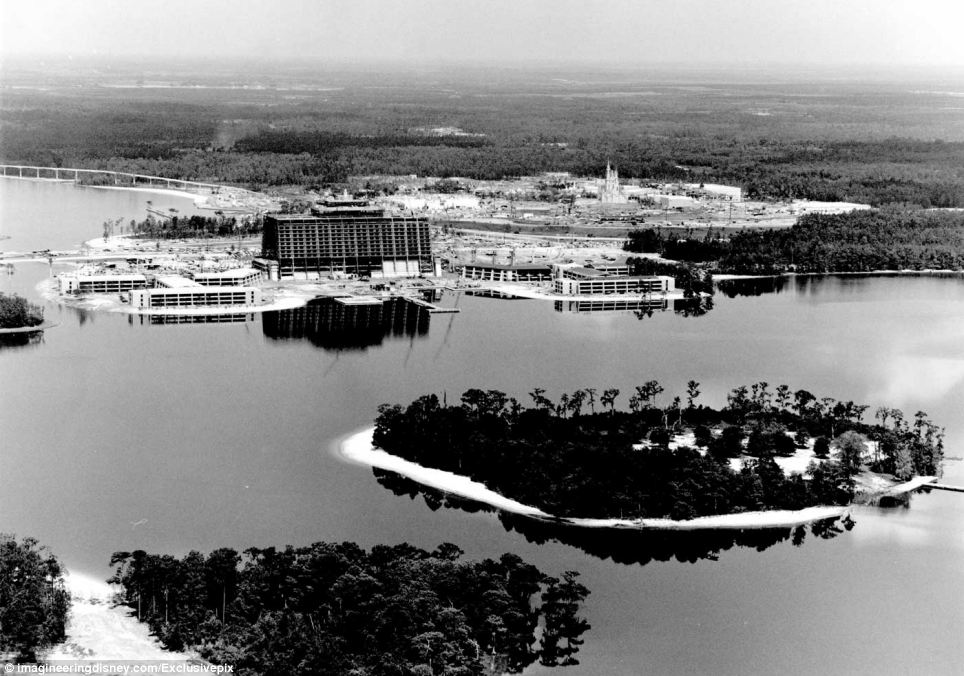 More than 700 million visitors have visited the four  theme parks and huge Disney complex – and for many children, it’s a dream come  true once they visit

Up until his death in December 1966, Walt  developed his ideas, directed planning outlined his philosophies for the new  complex.

In 1967 a flurry of work began, including the  development of a 45-mile network of water-control channels.

Construction for the ambitious project began  in April 1969 after an opening date was set for October 1,  1971.

Some 9,000 workers were involved in the  two-year construction effort producing an entertainment paradise around lakes,  forests and meadows.

During the final 18 months before opening,  one million guests visited the Walt Disney World Preview Center where models,  drawings and motion pictures explained details of the vast development. Total  cost of the project by opening was $400 million.

Clearly the hard work was worth it, as today  the four Disney theme parks have welcomed more than 700 million  guests. 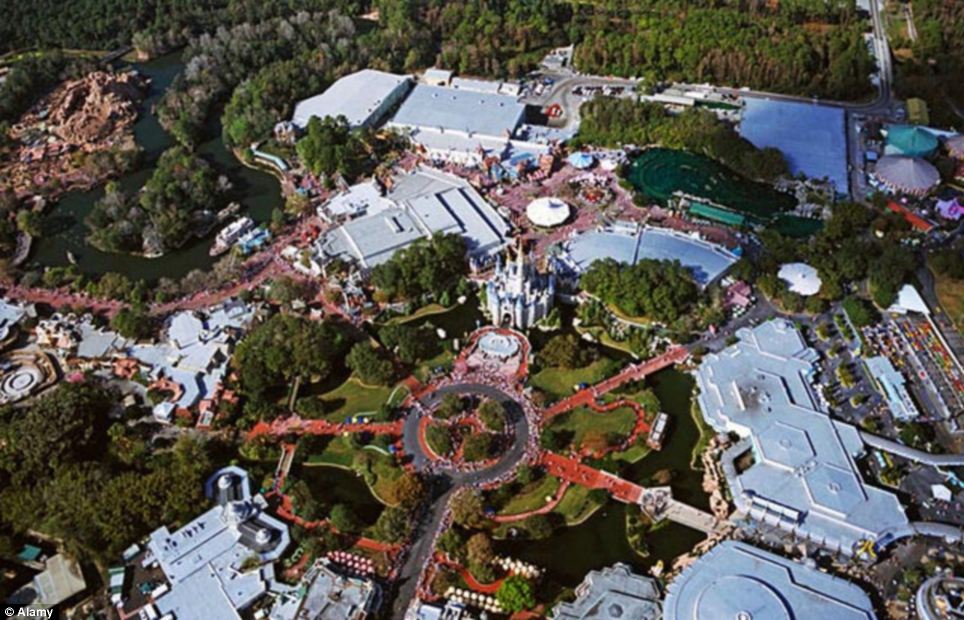 The Magic Kingdom as it is today: Years of hard toil and  a huge vision produced the well-known theme park, which is known the world  over