A Chinese spacecraft has carried out a deep space fly-by on an asteroid four and a half million miles away from the Earth.

The Chang’e-2 probe successfully conducted the mission to scan the surface of the asteroid Toutatis.

It happened on December 13 at 16.30om Beijing Time, the State Administration of Science, Technology and Industry for National Defense announced today. 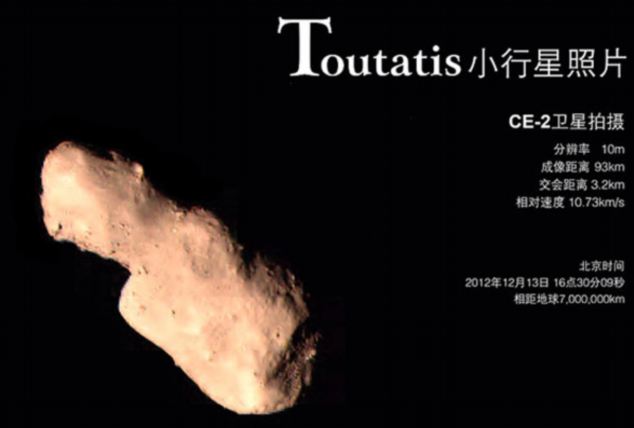 The Chinese space probe flew got around two miles away  from the asteroid Toutatis, officials said

At 2.7 miles long and 1.5 miles wide, astronomers say it is considered a potentially hazardous asteroid  because it  makes repeated passes by the Earth, about every four years.

In comparison, the asteroid that is thought to have destroyed the dinosaurs was approximately 10 km (6 miles) wide.

The flyby was the first time an unmanned spacecraft launched from Earth has taken such a close viewing of the asteroid, named after a Celtic god.

China followed in the footsteps of the U.S.,  the European Union and Japan by using an spacecraft to examine an asteroid.

Chang’e-2 came as close as 2 miles from Toutatis and took pictures of the asteroid at a relative velocity of 10.73km per second, the SASTIND said in a statement.

Sources with the administration told the Xinhua news agency that Chang’e-2 is continuing its deep space travel and will reach a distance of more than six million miles away from Earth in January next  year.

Chang’e-2 was launched on October 1, 2010,  from Xichang Satellite Launch Center and later orbited the moon in a more ambitious mission than its predecessor Chang’e-1.

Chang’e-2 left its lunar orbit for an  extended mission to the Earth-Sun L2 Lagrangian point on June 9, 2011, after  finishing its lunar objectives, which collected data for a complete lunar  map. 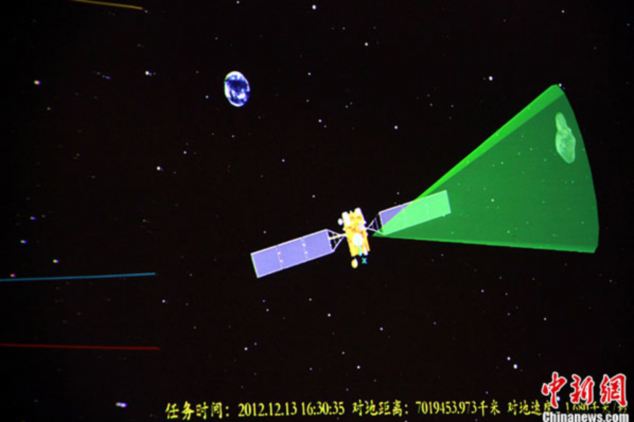 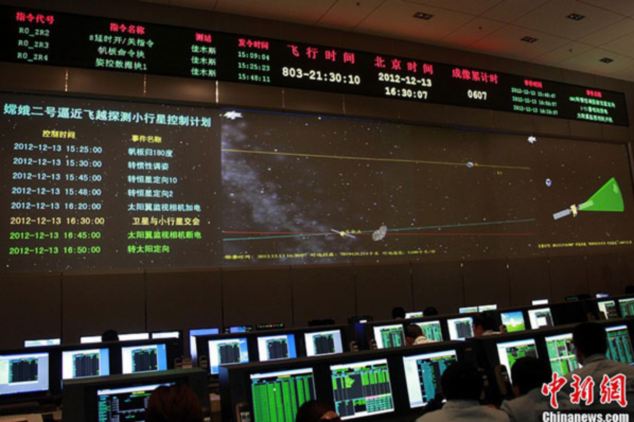 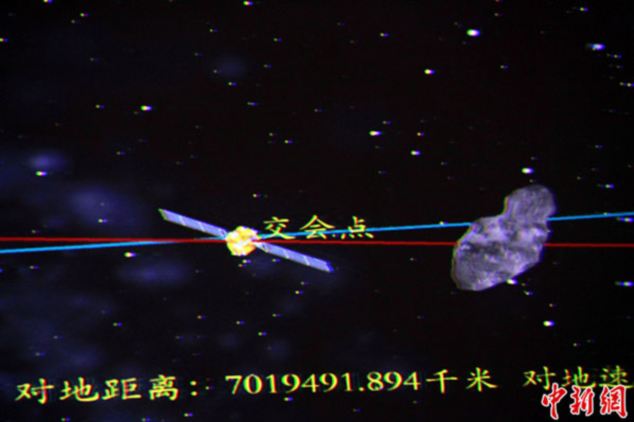 China claims it was the first to closely observe the  asteroid Toutatis, although other space missions have pictured it

The probe departed from L2 this year and  began its mission to Toutatis.

Since its blast-off, Chang’e 2 has become the first to capture full coverage map of the moon with a resolution of seven meters.

China claims it was also the first object ever to reach the L2 point directly from lunar orbit; and being the first to closely observe the asteroid Toutatis.

China early this year published a full coverage map of the moon, as well as several high-resolution images of the celestial body, captured by Chang’e-2. The resolution of the images is 17 times  greater than those taken by Chang’e-1.

Chang’e-2’s extended missions, which were conducted millions of miles away from Earth, have tested China’s spacecraft tracking and control network, including two newly built measuring and control  stations in the northwest Xinjiang Uygur Autonomous Region and northeast  Heilongjiang province, according to the SASTIND.

However, China still belongs to the second  tier in lunar probe internationally, said Ouyang Ziyuan, chief scientist for  China’s lunar orbiter project, adding that the U.S. and Russia are still leading  nations in this field.

Wu Weiren stressed the need for international cooperation in lunar probe mission, saying it is a shared responsibility of  world scientists to work together in lunar and deep space exploration for the  common good of the human race.