Think about it. Is it not the next logical step to a complete shutdown of free and possibly controversial speech?

No one is even suggesting such an absurd and over-the-top solution to curb offensive speech.

Sure, they’re have been many dozens of conservatives, particularly on College campuses, who have been protested, shouted down and even run off campus by leftist gangs.

But that’s where it ends. No one is even suggesting fining people who offend.

And if you’re thinking that no one in the country has been fined for such a thing, you’d be right. At least not yet. END_OF_DOCUMENT_TOKEN_TO_BE_REPLACED

British comedian Ricky Gervais has been called “transphobic” over defending women refusing to wax transwomen in Canada because they are uncomfortable dealing with their clients’ very male genitalia. Gervais defended the spa workers saying that it’s “real feminism” for women to choose who to wax or not, but internet users aren’t having it.

Remember, trans women have more political victim tokens than ordinary women. If Gervais would only remember that, he wouldn’t be dragged as he is at the moment. END_OF_DOCUMENT_TOKEN_TO_BE_REPLACED

And here I thought Canadians were such nice people.

A disgruntled bride-to-be has revealed she was forced to cancel her extravagant ‘fairytale’ wedding after her guests refused to pay $CAD 1,500 each to attend.

But the couple decided to call off the ceremony just four days before exchanging their vows after they struggled to foot the bill.

Taking to Facebook to explain their decision, the furious mother-of-one blamed her family and friends for the breakdown of her relationship as she vented her frustration in a lengthy post. END_OF_DOCUMENT_TOKEN_TO_BE_REPLACED

I couldn’t help noticing the grateful immigrants, who are so thankful to leave their war-torn, murderous and oppressive nations. These patriots in waiting set atop the border fence, laughing and waving the American flag out of respect and reverence for their new home.

What? That’s not what happened? Huh. Instead these invaders were waving every flag but ours – the flags of the war-torn hell holes like Honduras they claim to wish to escape. These are not refugees, but invaders.

Now some might say – how dare I call them invaders? Well what would you call them? What do hostile forces do after they’ve sacked a town, or territory? Oh that’s right. They announce to the world that this is conquered territory by taking down the enemies flag and waving theirs around in triumph before running it up the flagpole. Given the opportunity and the attitude, I don’t doubt that at least some of these “migrants” would surely do just that – take down the American flag and replace it with the Honduran flag.

Some would ask why the migrants don’t just seek asylum in Mexico.

The answer was established almost a month ago – that this caravan march to the border is not about, and was never about asylum, refugees, or even making to our border – at least not for the organizers. Organizers? You mean this caravan march was not spontaneous? END_OF_DOCUMENT_TOKEN_TO_BE_REPLACED

Who doesn’t dream of a romantic, moonlight walk along the beach? Walking barefoot, feeling the sand between your toes. Sounds delightful.

But a couple of weeks ago, a Canadian couple returned from their vacation in the Domincan Republic to discover that the itchiness they were experiencing in their feet was the result of hookworms that they picked up from that barefoot walk on the beach.

According to the CDC: END_OF_DOCUMENT_TOKEN_TO_BE_REPLACED

Global warming nuts are at it again, and this time they have attempted to co-opt Christmas, by telling us that Santa is a “Climate

I can think of no better way for radical leftists to celebrate the holiday than to scare the crap out of children. And not just any leftists, but trusted government leftists – because really – if you can’t trust your government to be honest with your kids, who can you trust. Am I right?

“There is no country on the planet that can walk away from the challenge and reality of climate change, And for our part, Canada will continue to fight for the global plan that has a realistic chance of countering it. We have a responsibility to future generations and we will uphold it,” the young and dashing Canadian Prime Minister, Justin Trudeau, recently, told the United Nations General Assembly.

That September proclamation has now been followed by a warning to the world’s children, as a “Canadian government website claims that Santa Claus is relocating his workshop, elves and reindeer to the South Pole to escape the effects of global warming.” END_OF_DOCUMENT_TOKEN_TO_BE_REPLACED

A colorful bird-like dinosaur that was almost as big as a man has been identified by scientists.

The blue and beige feathered creature stalked the Canadian ‘badlands’ of Alberta 71 million years ago.

Its remains had been dug up over the years in what is now Red Deer River Valley, a famous dinosaur graveyard, but it’s only now that a true picture of it has emerged. 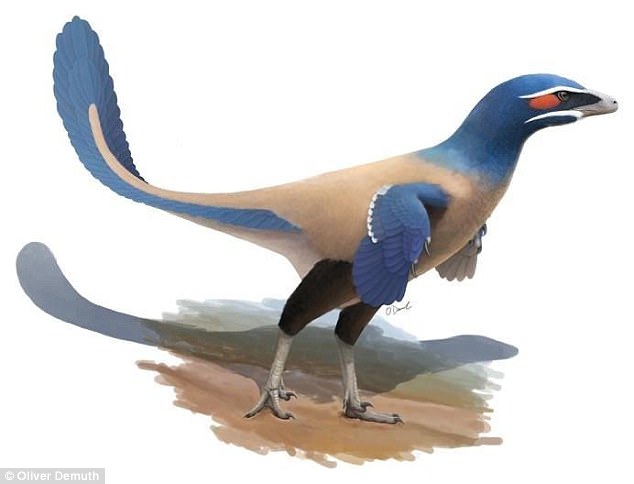 A colorful bird-like dinosaur that was almost as big as a man has been identified by scientists. The blue and beige feathered creature stalked the Canadian ‘badlands’ of Alberta 71 million years ago (artist’s impression)

END_OF_DOCUMENT_TOKEN_TO_BE_REPLACED

The Hits Just Keep on Coming! Every week there is more evidence of self-deportation. Ain’t it Grand. As I’ve

predicted on many occasions – if we are serious about deportation, the word will get out and they will begin to leave on their own. We don’t have to lift a finger or spend a dime of taxpayer money.

However, if it keeps up, we may see Canada building a wall on its Southern Border.

The Daily Mail chronicles the new found pressure being put on the Canadian border patrol. They are the ones now demanding more agents as they struggle to cope with the pending flood of illegals trying to escape “Trump’s” America. END_OF_DOCUMENT_TOKEN_TO_BE_REPLACED

Remember the Keystone XL Pipeline project? Remember what a cause célèbre it was for both the left and right? What the heck ever happened to it? Have you wondered that?

Well, in short it was killed pretty much for good, or at least the foreseeable future – both here in the USSA and now in Canada. As you are no doubt aware, it was Obama who, with the left in the federal and various state legislatures – and with some help from Choo-choo Warren Buffet who owns most of the rail cars now hauling crude down south, vetoed the pipeline. And don’t forget all the gobs of leftist activist money thrown at killing the project.

You may also recall that Canada threatened to build their own pipeline to their west coast and ship the oil to Asia if the U.S. did not acquiesce. That was when the “conservatives” ran Canada. But with the election of lefty socialist (like there’s another kind) Justin Trudeau in Canada, the entire XL project, above and below the border, was pronounced dead.

And that was the end of any talk of long distance oil pipelines. Or is it?

There is another long distance oil pipeline which will span 1,172 miles – from North Dakota’s famous Bakken and Three Forks oil production zones all the way to Pakota, Illinois. END_OF_DOCUMENT_TOKEN_TO_BE_REPLACED

Happy Labor Day all. I trust everyone is enjoying their long weekend. Here in New England Labor Day marks the official end to summer, fall unofficially begins, lasts about a week and a half and I go into hibernation until spring. Every year about this time I wish for global warming.

Labor Day for many is about family gatherings, cookouts, parades and fireworks. I enjoy all these but I personally give no acknowledgment to the “holiday” for Labor Day is a celebration of the “workers”. And not just any workers; union workers. Let’s just say I’m not a fan of unions, particularly public-sector unions.

But isn’t Labor Day a celebration of all workers? Maybe now, but it didn’t start out that way.

Most believe that like Independence Day, Labor Day is uniquely American.

It actually came about as a result of an 1872 strike by the Toronto Typographical Union. The strike was a protest of the long hours they had to work. They called it the “Nine Hour Movement” after the demand to decrease hours worked from 12 per day to 9 per day.

What those Canadian union strikers may not have realized was that striking was illegal, a criminal offense, thanks to a little-known law passed in 1792.

Consequently 24 members of the strike organizing committee were thrown in the slammer and many unionize workers were simply replaced by the employers. The employers brought in nonunion labor from nearby towns.

Prime Minister John McDonald was not too pleased by these employers’ actions and push through the “Trade Union Act” legalizing the union’s action.

Some accounts are that Peter McGuire, the general secretary of the Brotherhood of Carpenters and Joiners was witness to one of the Canadian Labor Day celebrations.

He went back to New York and proposed an American Labor Day; the first on September 5, 1882, yet it didn’t become a holiday until 1894.

The holiday was brought about by the great Pullman strike of 1894. Pullman manufactured train cars in the Chicago area. This strike caused railroad shutdowns all over the country. President Grover Cleveland sent troops and marshals to end the strike. The result was 30 strikers dead and 57 wounded.

It was this that caused Congress to propose and ratifiy the national holiday not even a week after President Cleveland ended the strike.

Oh, and in the “some things never change category”, the Pullman strike was organized by a union boss, Democrat hack and avowed socialist, Eugene Debs.