In one of his biggest post-White House speeches, former President Barack Obama on Friday told America that President Donald Trump and Republicans in Congress have cultivated a divided America since he left office last January.

In response, Obama urged unity. But more significantly, he urged Americans to vote for Democrats in November as a check on the Trump administration’s “abuses of power.”

“In two months we have the chance, not the certainty, but the chance to restore some semblance of sanity to our politics. There is actually only one check on bad policy and abuses of power, and that’s you and your vote,” Obama said. END_OF_DOCUMENT_TOKEN_TO_BE_REPLACED

Civility in politics has always been a challenge. There are examples of poor behavior going back to the Founding. The two-party system is adversarial, but rules of order and the basic decency of our citizens have been a brake on the outright violence seen in third world countries.

However, in the past eight years that has changed. Former President, Barack Obama worked hard to sow divisions within our populous, and deepen the rift that most Americans worked so hard to close. Academics pursue these divisions for no other reason than to attempt to push through a socialist agenda. While most people in real America do nothing more than work hard and long hours to put food on the table and pay their bills, there are those who want nothing more than to tear our country apart.

The #walkaway movement has finally given those of the progressive socialist party, commonly called the Democrats, an opportunity to pull away from a party that has moved further left to a socialist style government on everything from immigration to reparations. Our 200-year history is the prop they are attempting to use to obtain something for nothing and to force others to live under the rules that they demand. END_OF_DOCUMENT_TOKEN_TO_BE_REPLACED

former president – who made his wife ambassador to the Bahamas

Sarandos and Avant bundled nearly $600,000 in contributions to Obama during the 2012 presidential campaign, the New York Post reported.

Sarandos helped broker the deal, the Post reported, which is said to worth up to $50 million to the former first couple.

The Netflix COO and his wife are longtime friends of the Obamas. Avant serve as ambassador to the Bahamas from 2009 to 2011. It’s common for presidents of both parties to appoint big donors to ambassadorial positions.

Remember when Barack Hussein Obama could do no wrong? I do, because it wasn’t too long ago. For eight long years we on the right suffered as Obama did whatever he pleased. And during this time there was not a single disparaging word from left.

For a period, Obama vanished – went off to one after another vacation. But these weren’t just any old outings. These were luxury vacations with billionaires and beautiful people, in far-away places you or I could not hope to go.

But that’s not the only thing that changed on January 21st – the day after Trump was inaugurated. That date mark the start of a new campaign season.

I know what you’re thinking and probably saying out loud. We just finished. Can’t we get a break already? No – no we can’t. You might also be thinking that the 2018 midterms are still a ways away. Why do they need to begin so early? END_OF_DOCUMENT_TOKEN_TO_BE_REPLACED

Well – it looks like it was all by design. Throughout his entire presidency, Obama and his most transparent

administration of all time has had it out for whistleblowers.

In March, 2015, the Guardian posted an article stating that, “Since Barack Obama entered the White House in 2009, his government has waged a war against whistleblowers and official leakers. On his watch, there have been eight prosecutions under the 1917 Espionage Act – more than double those under all previous presidents combined.”

However, they also went on to explain that it’s not like Obama prosecuted all leakers. Those “leaks” from high-level officials like Leon Panetta, John Brennan or even New York Times reporter, David Sanger, were all given a pass.

Bottom line – if you were favored by Obama and the leak would make the President look good, no harm would come to you.

But then in January, a week prior to Trump’s inauguration, it seemed everything changed. The Washington Times reported that, “President Barack Obama— with about a week left in his presidency — has all of a sudden shown interest in protecting government whistleblowers and the inspector general community.” END_OF_DOCUMENT_TOKEN_TO_BE_REPLACED

In this episode I discuss the silly atheist Michael Newdow and his latest anti-religion lawsuit attempting to rid America of the scourge of “In God We Trust.” He claims that this “Motto” and others are promoting Monotheism in our nation and he won’t stand for it.

In the second segment I discuss a recent article on the Guardian website that insists Obama is the cause of the rise of Donald Trump – that the American public is so angry at Obama and government they are now flocking to Trump, who he calls the anti-Obama. I also uncover a silver lining to a Trump presidency, as liberals promise to leave America should he be elected. END_OF_DOCUMENT_TOKEN_TO_BE_REPLACED

It has been said it simply wasn’t Marco Rubio’s night on Saturday. It’s been said he stumbled and was tripped up causing him to revert back to a canned and practiced statement about how Obama has known all along what he wanted to do after he was elected. Rubio repeatedly insisted that Obama is not incompetent, he’s a radical. He didn’t say radical – he said Obama knows exactly what he’s doing – the radical is implied.

As has been widely reported, Marco Rubio repeated four times, essentially that same canned talking point during Saturday’s debate, for which he was called out by blowhard Chris Christie – and now the media and pundit class. For this many have taken to calling him Marco Robot and Marco Roboto.

It’s no different than “15 minutes can save you 15%,” or the old and highly successful Miller Lite ad, “Tastes Great – Less Filling.” Does anyone really know if spending 15 minutes on a Geico website will actually save 15%? Of course not and who cares? They don’t. All they care about is that everyone knows the slogan, equates it with Geico and if it’s repeated often enough it becomes some sort of quasi-fact. END_OF_DOCUMENT_TOKEN_TO_BE_REPLACED

Barack Obama and Vladimir Putin have a couple things in common. Both are domestic authoritarians and both believe themselves to be dictators of their respective countries. Beyond that, they are pretty much polar opposites.

Putin, the ex-KGB agent fancies himself a tough guy, a man’s man, spending a great amount of time shirtless and probably in front of a mirror. And being an ex-agent, he is more than likely a tough guy. Obama, as has been demonstrated on many occasions, is a wimp who merely plays at being tough, but only to the extent he can remain unchallenged, which is the mark of a bully.

Domestically Obama appears tough because he has force of the federal government to do his bidding and spineless cowards as his only opposition – those cowards being the republicans. He is free to push them around the schoolyard. But internationally – that’s a different story. At the first sign of trouble he folds. He’s not equipped for the international stage, where his army of government lawyers can’t merely pressure and threaten his enemies into capitulation. Other world leaders have no fear of that, which is why he chooses to lead from behind.

Take for example the latest juxtaposition between he and Putin with their handling of ISIS and Syria in general. Putin, to be sure, is a dirtbag despot, but he does understand war and the use of his military. We certainly should not agree with his ambitions and alliances, but he appears to be getting the job done, as he sees it. He evidently has full comprehension that the job of his military – any military, is to kill people and break things. And he has set out to do just that. END_OF_DOCUMENT_TOKEN_TO_BE_REPLACED

It’s common knowledge that Barack Obama is no fan of Israeli Prime Minister Benjamin Netanyahu, and the same goes for Bibi’s feeling toward Obama. In fact, in my opinion, they despise each other. Barack hates Bibi because Obama is an Islamic sympathizer, and Bibi hates Obama for the exact same reason.

Of course that’s not the way it is publicly. World leaders, even ones that lead from behind are expected to maintain decorum when they speak of one another. There is no love for one another or even mutual admiration, but a healthy respect is conveyed. That’s publicly.

And I guess that public decorum is supposed to extend down the line to staff members – say to like a communications director, whom you would think would know how to effectively communicate.

But evidently, conservative commentator Ran Baratz, Netanyahu’s newly appointed communications director didn’t get the memo, as some rather ignoble comments have been discovered about our fine Israel-loving president.

His Facebook post, although written in Hebrew is translated as: “I may be a little spicy, unlike להרגליי moderates: Obama’s treatment of Netanyahu’s speech — Looks like a modern anti-Semitism in western liberal. Of course and she comes with a lot of tolerance and understanding of anti-Semitism Islamic; so much tolerance and understanding, until willing to even give them a nuke.” END_OF_DOCUMENT_TOKEN_TO_BE_REPLACED

In 2008, many unsuspecting voters took a cursory look at candidate Barack Obama and saw something new and different. By now a good number of those ignorant citizens have wised up, at least enough to recognize that Barack “Philip Dru” Obama is nothing new. He 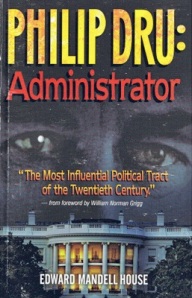 is just a logical choice of a progressive ideal that began long ago, toward the turn of  last century, whose goal was turning the American Republic into a socialist utopia.

Moses Mordecai Marx Levy, a.k.a. Karl Marx, published his Communist Manifesto in 1848. However, his Manifesto borrowed so heavily from a book written by Clinton Roosevelt, The Science of Government Founded on Natural Law, published in 1841, which Marx was introduced to at a Reading Room of the British Museum, that it was close to plagiarism. Author Emanuel M. Josephson even called Science, “Roosevelt’s Communist Manifesto”. What a coincidence Clinton Roosevelt is related to 2 of the 3 early progressive presidents, Teddy and Franklin. I guess it must run in the family.

Men), was an offshoot of the Parisian Outlaws League (which evolved from the Jacobin movement).

Both Clinton Roosevelt and Horace Greeley, owner of the New York Tribune, the country’s first national newspaper, provided funds for the Communist League in London to pay for the publication of Karl Marx’s Communist Manifesto. Moreover, Greeley put Marx on his newspapers’ payroll. Imagine that, the father of modern-day communism on the payroll of a New York newspaper.

Both Roosevelt’s Science and Marx’s Manifesto agreed on the prerequisites for the implementation of communism. Let’s take a look at these 12 prerequisites for creation of a communist society juxtaposing present-day America. How close are we? You be the judge: END_OF_DOCUMENT_TOKEN_TO_BE_REPLACED