I recently read that former Congresswoman Gabrielle Giffords who, last year, survived an assassination attempt is receiving a real honor. She is having a Navy ship named after her. 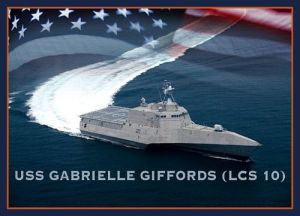 My first thought was, good for her. Then I began to ponder it further. Why her? I feel for her & her family but I’m not sure this is appropriate. Yes, she was in congress. So what?

As is usually my want, I started to look a little further.

It seems this is the “New, socially conscious, Navy”. In 2010 the USS John P. Murtha was unveiled, of course, named after said liberal shady dealer.  Earlier this year, the Navy announced plans for the USNS Cesar Chavez, after the labor leader.

Are you kidding me? What’s next, the USS George Soros or maybe the Saul Alinsky? Are there no American traditions left?

Rather than ranting over it, I’ve compiled a history of how naval ships were named. You may be the judge of whether this new nepotistic method is appropriate.

The Navy traces its ancestry to 13 October 1775, when an act of the Continental Congress authorized the first ship of a new navy for the United Colonies, as they were then known. The ships of the Continental Navy, and of the Navy later established under the Federal Constitution, were not named in any strictly categorical manner.

Ship names in the Continental Navy and the early Federal navy came from a variety of sources. As if to emphasize the ties that many Americans still felt to Britain, the first ship of the new Continental Navy was named Alfred in honor of Alfred the Great, the king of Wessex who is credited with building the first English naval force.

On 3 March 1819 an act of Congress formally placed the responsibility for assigning names to the Navy’s ships in the hands of the Secretary of the Navy, a prerogative that he still exercises. This act stated that “all of the ships, of the Navy of the United States, now building, or hereafter to be built, shall be named by the Secretary of the Navy, under the direction of the President of the United States, according to the following rule: Those of the first class shall be called after the States of this Union; those of the second class after the rivers; and those of the third class after the principal cities and towns; taking care that no two vessels of the navy shall bear the same name.” The last-cited provision remains in the United States Code today.

Ships armed with 40 guns or more were of the “first class”; those carrying fewer than 40, but more than 20, guns were of the “second class.” The name source for the second class was expanded to include principal towns as well as rivers.

An act of May 4, 1898, specified that “all first-class battleships and monitors [shallow-draft coast-defense ships completed between 1891 and 1903, armed with heavy guns] shall be named for the States, and shall not be named for any city, place, or person, until the names of the States have been exhausted, provided that nothing herein contained shall be construed as to interfere with the names of states already assigned to any such battleship or monitor.”

However, in 1894 the famed Civil War sloop-of-war Kearsarge ran aground in the Caribbean and had to be written off as unsalvageable. There was so much affection for that ship in the Fleet that the Secretary of the Navy asked Congress to permit her name to be perpetuated by a new battleship. This was done, and Kearsarge (Battleship Number 5) became the only American battleship not to be named for a state.

Ship name recommendations are conditioned by such factors as the name categories for ship types now being built, as approved by the Secretary of the Navy; the distribution of geographic names of ships of the Fleet; names borne by previous ships which distinguished themselves in service; names recommended by individuals and groups; and names of naval leaders, national figures, and deceased members of the Navy and Marine Corps who have been honored for heroism in war or for extraordinary achievement in peace.
As battleship construction went on through the early 1900s, state names began to run short. The law stated that battleships (first class) had to bear state names; to comply with this, monitors and armored cruisers were renamed for cities within their respective name

states to free the names of their states for assignment to new battleships. The monitors Florida and Nevada, for instance, became Tallahassee and Tonopah, while the armored cruisers Maryland and West Virginia became Frederick and Huntington. By 1920, state names were the sole preserve of battleships.

World War I brought the development of mine warfare necessitating the introduction of a new type of ship, the minesweeper. A new type of ship required a new name source. The then-Assistant Secretary of the Navy, Franklin D. Roosevelt, had a keen interest in amateur ornithology. This led him to select bird names as the name source for these new ships, and “F.D.R.” signed the General Order assigning names to the first 36 ships of the Lapwing class.

Between World War I & II, the Navy’s first aircraft carriers came into service. Our first carrier, converted from the collier Jupiter, was named Langley (CV 1), in honor of aviation 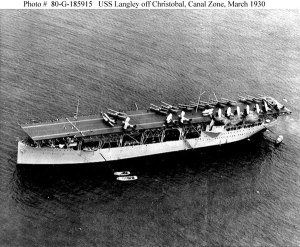 pioneer Samuel Pierpont Langley. Our next two carriers were built on the unfinished hulls of battle cruisers, two of a canceled class of six fast capital ships, which had already been assigned the names of American battles, and famous former Navy ships. These new carriers kept their original names, Lexington and Saratoga. The original battle-cruiser name source continued as carriers Ranger, Yorktown, Enterprise, Wasp, and Hornet entered service between 1934 and 1941, carrying on through World War II and into the postwar years.

Having their names reassigned to new construction normally honored ships lost in wartime. Names like Lexington, Yorktown, Atlanta, Houston, Triton and Shark were perpetuated in memory of lost ships and gallant crews. Unique among these names awarded in honor of lost ships was Canberra, assigned to a heavy cruiser in honor of the Australian cruiser Canberra. It was sunk while operating with American warships during the Battle of Savo Island in August 1942. This was seen to be an appropriate exception to the custom of naming cruisers for American cities. 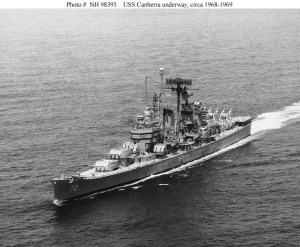 During World War II the names of individuals were once again assigned to aircraft carriers. The Franklin D. Roosevelt was the first aircraft carrier (CVB 42) to be named for an American statesman. Secretary of the Navy James Forrestal suggested that name to President Harry S. Truman, shortly after FDR’s death in 1945. The first “Supercarrier,” the Forrestal (CVA 59), was named after the aforementioned Sec. Nav.

With the onset of the new age, Nuclear-powered fleet ballistic missile submarines, built to carry the Polaris strategic deterrent missile, began to go into commission in the early 1960s. These were rightly regarded as ships without precedent. Thus, a name source of their own was 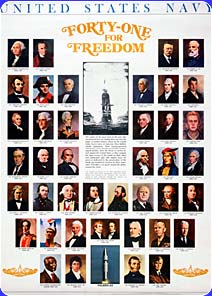 deemed appropriate. Our first ballistic missile submarine was named George Washington. They were classified as the  “41 for freedom” and bore the names of famous Americans and others who contributed to the growth of democracy, such as Patrick Henry and Ethan Allen.

All the ships of the current Nimitz class bear the names of such national figures as Theodore Roosevelt, George Washington, and Ronald Reagan

Many naval ships are non-combatant in nature. Examples include, Submarine tenders that bear the names of sub pioneers, such as Simon Lake, Hunley & Holland. Ammunition ship names are of volcanoes or words denoting fire and explosives, such as Suribachi or Pyro. Fleet tugs, rescue & firefighting craft bear American Indian names like Powhatan and Navajo.

I’m sorry but I don’t see our naval history replete with any junior congressman or labor leaders.