The following is a video from Saturday, Oct. 29, showing the peaceful protestors of Occupy Denver just minding their own business. I think I can hear them singing Kumbaya in the background.

All the sudden the jack-booted thugs (police) move in. Someone with a loudspeaker is dropping “F” bombs as freely as a conservative throwing styrofoam out his car window. Must have been an infiltrator from the 1%.

This is the caption from the original Video, “Frank Roper was showing his massive bruise to arriving cops and his foot was ran over by a cop on a motorcycle. He pushed the motorcycle and the cop got off the bike, chased him down and Frank Roper was then arrested.”

As we can see, these “unplanned” events are starting to become more out of control. It’s almost as if they were planned to go this way. Could we have another Kent State on our hands soon?

How about some historical perspective.

We all remember the incident at Kent State University in 1970. If not, it is where 4 students were shot dead & many others wounded by National Guard troops. The Guard was called in to try to restore order during large on-campus demonstrations against the Vietnam War.

All major media accounts reported it as the National Guard thugs simply opening up on the poor innocent student body who were conducting peaceful & spontaneously organized protests. Heck, a hit song was even written about it. “Ohio”, by CSNY.

Well, it wasn’t quite like that at all. Here’s some interesting background leading up to that fateful day in 1970.

In the fall of 1968, Kent State was treated to two appearances by Mark Rudd, the S.D.S. (Students for a Democratic Society) leader who led the seizure, with aid of the Black Panthers, of campus buildings earlier that year at Columbia University in New York. Another frequent visitor was Bernardine Dohrn, an S.D.S. official who called herself a “revolutionary Communist” & reportedly told the students: “They’ve shot blacks in Orangeburg, South Carolina, and they’re certainly going to shoot whites here.”

Just a quick tip. Anytime you see, “Anyone for a Democratic anything”, you know they’re communists. Terrorist Bernardine Dohrn, wife of terrorist Bill Ayers & friends of Obama. You mean that Berardine Dohrn? Yep. Small world isn’t it?

Back to history.
In early 1969, S.D.S. distributed copies of the Organizers’ Manual For The Spring Offensive, which explained: “During the course of the struggle it will probably be necessary and helpful to carry out a series of escalating ‘mini’ actions to help build consciousness and dramatize the issue. Beginning with guerrilla theater actions in dorms we can escalate to disrupting classes, street marches, quick assaults on buildings, etc., before moving to the major confrontation of the struggle.” So the purpose of all this agitation at Kent State was to recruit as much cannon fodder as possible, and then to provoke a “major confrontation.” When it came, and it did, it would be neither accidental nor spontaneous. It would be exactly what the revolutionaries wanted. 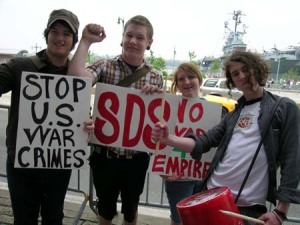 In April, 1969, a full year before the “massacre”, the S.D.S distributed a pamphlet, which began with a quotation from Mao Tse-tung and the following warning: “The war is on at Kent State University ….”.

Just as today, one might wonder where these people got the money to do all this? The answer is the same as today, most likely. Back then the Illinois Crime Investigating Commission, which investigated S.D.S., reported that one large tax-exempt foundation directly supplied the revolutionaries with cash. Things that make ya go hummm.

A Kent State student named Ken Tennant is quoted saying, “With me it goes back to the music festival they held at Fred Fuller Park in September, 1969. Four Weathermen (Bill Ayers) came down from Chicago, with an insignia on their bib overalls. They were selling their organization newspaper, and I said, ‘I’ll buy a copy if you’ll tell me what your outfit stands for.’ They said, ‘We’re going to destroy this corrupt American society and build a better.’ I asked how, and they explained, “We’ve decided to close down schools all over the nation. We’re going to start in Chicago. But we have our eye on Kent State, too. It could be ripe.”

A couple of other choice quotes as follows: February 27, 1969, S.D.S. hustler Joyce Cecora told an audience that “if the university does not stop politically repressing S.D.S., they would burn and level the campus.”

In April of 1970 at Kent State, Communist Jerry Rubin said, “The first part of the Yippie program is to kill your parents. And I mean that quite literally, because until you’re prepared to kill your parents, you’re not ready to change this country. Our parents are our first oppressors.”

I’m not saying that history will definitely repeat, but it is starting to look that way. As it was 40 years ago, that is what they want. Society must collapse before it can be rebuilt.