by: Kathleen Marquard & the Common Constitutionalist

Nope. It was Professor Maurice Strong and he was just one of the speakers at the Agenda 21 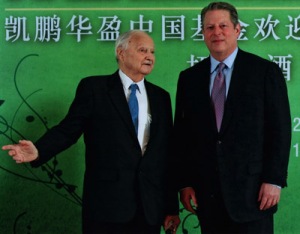 In 1992, twenty years ago this summer, Agenda 21/Sustainable Development was unveiled to the world at the UN’s Earth Summit in Rio.

In his opening remarks at the ceremonies at the Earth Summit, Maurice Strong stated: “The concept of national sovereignty has been an immutable, indeed sacred, principle of international relations. It is a principle, which will yield only slowly and reluctantly to the new imperatives of global environmental cooperation. It is simply not feasible for sovereignty to be exercised unilaterally by individual nation states, however powerful. The global community must be assured of environmental security.”

Sheesh! Take away the environmental crap and it sounds like Woodrow Wilson could have penned it.

George H.W. Bush was in Rio for the ceremonies and graciously signed on for America so that our overburdened Congress wouldn’t have to spend the time reviewing the document, thus learning then, what dastardly deeds were in store for us — that protecting the environment would be used as the basis for controlling all human activity and redistributing our wealth.

A year later Clinton established his President’s Council for Sustainable Development, which would embed the guidelines of Agenda 21 into public policy to be administered by the federal government via all departments. In doing this, Bush(41) and Clinton set up Agenda 21 as ruling authority, i.e., implementing a U.N. plan to become U.S. policy across the whole nation and bleeding into every county and town. And both succeeding presidents have evidently fully endorsed and implemented Agenda 21 through every department of the federal government.

Here is how the UN described Agenda 21 in one of its own publications in a 1993 article entitled “Agenda 21: The Earth Summit Strategy to Save our Planet: “Agenda 21

proposes an array of actions which are intended to be implemented by EVERY person on Earth…it calls for specific changes in the activities of ALL people… Effective execution of Agenda 21 will REQUIRE a profound reorientation of ALL humans, unlike anything the world has ever experienced.”

So, it sounds as if we may have to make some minor changes to our lifestyle.

In simple terms, Agenda 21/Sustainable Development is the end of civilization as we know it. It is the end of private property, the elevation of the collective over the individual. It is the redistribution of America’s wealth to the rest of the world (actually the global elites and progressive intellectuals); it is the end of the Great American Experiment and the Constitution.

Before we go any further, I know what you’re thinking. It’s been in effect since 1993, but I don’t see any drastic changes to this country. What’s the big deal? Remember this; National Healthcare was first proposed by Teddy Roosevelt. I’ll give Progressives props; they don’t give up. They’ll just keep pushing their agenda through generations and the foundation has already been laid.

According to its authors, the objective of Agenda 21/Sustainable Development is to integrate economic, social and environmental policies in order to achieve reduced

consumption, social equity, and the preservation and restoration of biodiversity (the 3Es of sustainability – Social Equity; Economic Prosperity; and Ecological Integrity). They insist that every societal decision be based on environmental impact, focusing on three components; global land use, global education, and global population control and reduction.

You will need to memorize these new vocabulary words if you are to be a good citizen of the world:

After reading this laundry list of Agenda 21 words, you may now see that some have already found their way into our lexicon. Those who control the language, control the argument, thus control the agenda.

This is not just policy but a complete restructuring of life as we know it. We not only will be taught how we must live, but where we are allowed to live; how many children we may

Does any of this sound familiar?

Agenda 21 is nothing more than worldwide centralized command & control. They only wish to control all aspects of our lives. Is that too much ask?