With the temperature dropping, the “Occupy Patriots” are stockpiling donated coats, blankets and scarves, trying to secure cots and military-grade tents, and getting survival tips from the homeless people who have joined their encampments.

“Everyone’s been calling it our Valley Forge moment,” said Michael McCarthy, a former Navy medic in Providence. “Everybody thought that George Washington couldn’t possibly survive in the Northeast.” Being that this guy was ex-Navy, I was going to cut him him some slack, but I can’t let this stand.

The following is an exerpt of a letter from George Washington at Valley Forge to N.Y. Governor George Clinton in February, 1778; “For some days past, there has been little less, than a famine in camp. A part of the army has been a week, without any kind of flesh, and the rest for three or four days. Naked and starving as they are, we cannot enough admire the incomparable patience and fidelity of the soldiery.”

General Washington further wrote, “To see the men without clothes to cover their nakedness, without blankets to lie upon, without shoes…without a house or hut to cover them until those could be built, and submitting without a murmur, is a proof of patience and obedience which, in my opinion, can scarcely be paralleled.”

These warriors survived by eating “firecake” (a tasteless mixture of flour and water) day after day. Often, not even that. In some cases they were forced to forage in the woods around camp.

The Continental Army encamped at Valley Forge in the fall of 1777 with about 12,000 men in its ranks. Death from things like typhus, typhoid, dysentery, and pneumonia claimed about a quarter of them before spring arrived from . That’s about 3,000 soldiers!

Here is an example of an Occupy Wall Street menu: 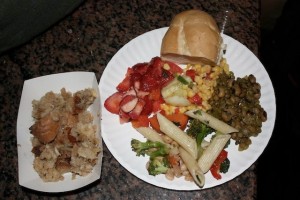 Do what you wish. March, protest, bitch & moan of what you know nothing about. Don’t, however, denigrate the memory of real heroes by equating your cushy little gatherings with what was endured at Valley Forge.

Most of you are snivelling pampered hippies who are too stupid to realize you are being used by some very evil people.