Many people, who do not look beyond the vision or the rhetoric to the reality, still think of labor unions as protectors of working people from their employers. And union bosses still employ that kind of rhetoric. However, someone once said, “When I speak I put on a mask, but when I act I must take it off.”

That mask has been coming off, more and more, especially during the Obama administration, and what is revealed underneath is very ugly, very cynical and very dangerous.

tried to push through Congress. What it would have destroyed was precisely what it claimed to be promoting — a free choice by workers as to whether or not they wanted to join a labor union.

Ever since the National Labor Relations Act of 1935, workers have been able to express their free choice of joining or not joining a labor union in a federally conducted election with a secret ballot.

As workers in the private sector have, over the years, increasingly voted to reject joining labor unions, union bosses have sought to replace secret ballots with signed documents — signed in the presence of union organizers and under the pressures, harassments or implicit threats of those organizers.

Now that the Obama administration has appointed a majority of the members of the National Labor Relations Board, the NLRB leadership has imposed new requirements that employers supply union organizers with the names and home addresses of every employee. Nor do employees have a right to decline to have this personal information given out to union organizers, under NLRB rules. 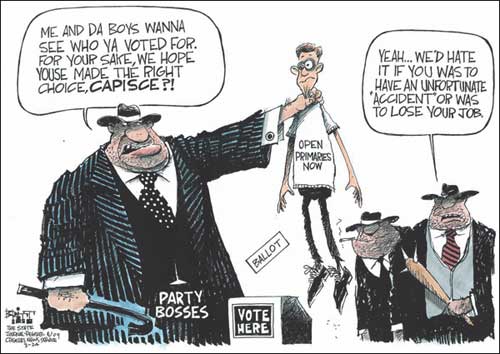 In other words, union organizers will now have the legal right to pressure, harass or intimidate workers on the job or in their own homes, in order to get them to sign up with the union. Among the consequences of not signing up is union reprisal on the job if the union wins the election. But physical threats and actions are by no means off the table, as many people who get in the way of unions have learned.

Workers who do not want to join a union will now have to decide how much harassment of themselves and their family they are going to have to put up with, if they don’t knuckle under.

When the unions began losing those elections, they decided to change the rules. And after Barack Obama was elected President of the United States, with large financial support from labor unions, the rules were in fact changed by Obama’s NLRB.

As if to make the outcome of workers’ “choices” more of a foregone conclusion, the time period between the announcement of an election and the election itself has been shortened by the NLRB.

In other words, the union can spend months, or whatever amount of time it takes, for them to prepare and implement an organizing campaign beforehand — and then suddenly announce a deadline date for the decision on having or not having a union. The union organizers can launch their full-court press before the employers have time to organize a comparable counter-argument or the workers have time to weigh their decision, while being pressured.

The last thing this process is concerned about is a free choice for workers. The first thing it is concerned about is getting a captive group of union members, whose compulsory dues provide a large sum of money to be spent at the discretion of union bosses, to provide those bosses with both personal perks and political power to wield, on the basis of their ability to pick and choose where to make campaign contributions from the union members’ dues.

Union elections do not recur like other elections. They are like some Third World elections: “One man, one vote — one time.” And getting a recognized union unrecognized is an uphill struggle.