Tax Revenues Jump 13% To Record High In April — When Will Dems Admit They Were Wrong About Trump’s Tax Cuts?

The federal government collected far more taxes this April than it did a year ago, despite the “budget busting” Trump tax cuts. So, we’ll ask again: Are the tax cuts paying for themselves?

According to the latest monthly report from the Congressional Budget Office, revenues in April totaled $515 billion — a 13% increase over last April and an all-time high for the month.

For the current 2018 fiscal year, which started last October, revenues are $83 billion higher than they were the year before — an increase of 4.3%. That’s a faster rate of growth than occurred during President Obama’s last years in office. (See nearby chart.)

Individual taxes, the CBO report says, are up 11.5% so far this fiscal year, and payroll taxes are up 2.8%. Both are signs of a healthy labor market, which is creating more jobs, higher wages and, as a result, more tax revenues. Those gains, the CBO says, more than offset the 22% decline in corporate income taxes. 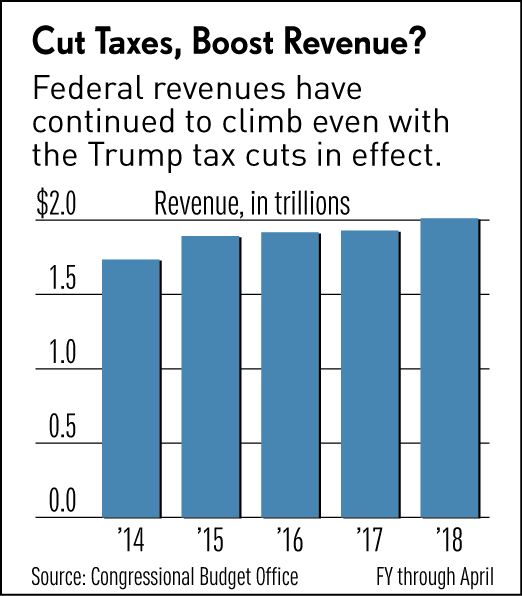 In other words, in a fiscal year that’s seven months old (four of which were after the tax cuts went into effect), federal revenues are higher than ever.

Or, to put it another way, it looks like those of us who predicted the pro-growth tax cuts would at least partially pay for themselves through increased economic growth were correct.