Excerpts from Paul A. Rahe’s article titled: American Catholicism’s Pact With the Devil

One might say that the Catholic Church itself laid the groundwork for the recent firestorm they find themselves embroiled in. I speak, of course, of the battle royal between the

Church and the Obama administration over what they claimed to be “Women’s Healthcare”.

It might be instructive to add some historical perspective to this dilemma.

In the burgeoning American republic, the principle of limited government was codified in its purest form in the First Amendment to the Constitution. But it had additional ramifications as well – for the government’s scope was limited also in other ways.

There were other amendments that made up what we call the Bill of Rights, and many of the states prefaced their constitutions with bills of rights or added them as appendices. These were all intended to limit the scope of the government. They were 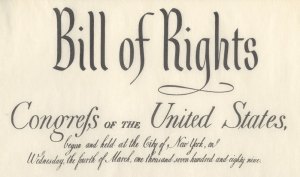 all designed to protect the right of individuals to life, liberty, the acquisition and possession of property, and the pursuit of happiness as these individuals understood happiness. Put simply, liberty of conscience was part of a larger package.

This is what the hierarchy of the Roman Catholic Church forgot.

In the 1930s, the majority of the bishops, priests, and nuns sold their souls to the devil, and they did so, as is usual, with the best of intentions.

Due to their concern during the Depression, for the suffering of those out of work and destitute, they wholeheartedly embraced the New Deal. They gloried in the fact that

Franklin Delano Roosevelt made Frances Perkins, a devout Anglo-Catholic laywoman who belonged to the Episcopalian Church but retreated on occasion to a Catholic convent, Secretary of Labor and the first member of her sex to be awarded a cabinet post.

In the process, the leaders of the American Catholic Church fell prey to that which had long

before ensnared a great many mainstream Protestants in the United States. That of the notion that public provision is somehow akin to charity and so they fostered state paternalism and undermined what they professed to teach: that charity is an individual responsibility and that it is appropriate that the laity join together under the leadership of the Church to alleviate the suffering of the poor.

In its place, they helped establish the Machiavellian principle that underpins modern liberalism, the belief that it is our Christian duty to confiscate other people’s money and redistribute it.

At every turn in American politics since that time, you will find the Catholic hierarchy assisting the Democratic Party and promoting the growth of the administrative entitlement state. It did not cross the minds of the hierarchy, that the paternalistic state they had embraced, would someday turn on the Church and seek to dictate how it would conduct its affairs.

The weapon that Barack Obama has directed at the Church was fashioned to a considerable degree by Catholic churchmen. They welcomed Obamacare. They encouraged Senators and Congressmen who professed to be Catholics to vote for it.

The Roman Catholic Church in the United States has lost much of its moral authority.

In 1973, when the Supreme Court made its decision in Roe v. Wade, had the bishops, priests, and nuns screamed bloody murder and declared war, as they have recently done,

the decision would have been reversed. Instead, under the leadership of Joseph Bernadin, the Cardinal-Archbishop of Chicago, they asserted that the social teaching of the Church was a “seamless garment,” and they treated abortion as one concern among many.

Here is what Cardinal Bernadin said in the Gannon Lecture at Fordham University that he delivered in 1983:

“Those who defend the right to life of the weakest among us must be equally visible in support of the quality of life of the powerless among us: the old and the young, the hungry and the homeless, the undocumented immigrant and the unemployed worker.

Consistency means that we cannot have it both ways. We cannot urge a compassionate society and vigorous public policy to protect the rights of the unborn and then argue that compassion and significant public programs on behalf of the needy undermine the moral fiber of the society or are beyond the proper scope of governmental responsibility.”

And there is more. Paul has not once, in the thirteen years of attending mass, heard the argument against contraception articulated from the pulpit, nor has he once heard the argument for chastity articulated. In the face of the sexual revolution, the bishops, priests, and nuns of the American Church have by and large fallen silent. In effect, they have abandoned the moral teaching of the Roman Catholic Church in order to articulate a defense of the administrative entitlements state and its progressive expansion.

Those who seek to create heaven on earth and who, to this end, subvert the liberty of others and embrace the administrative entitlement state will sooner or later become its victims.