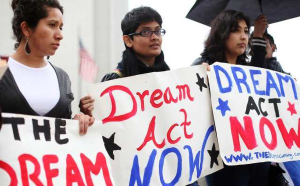 One of my readers recently read an article on the new California “Dream Act”. They suggested I tackle this topic & so I shall. Thanks for the suggestion and it pisses me off too.

The Dream Act is a 2 part plan. In July, Governor Brown signed AB 130 (part 1), making funding from private sources available to undocumented students (criminal aliens). With Saturday’s signing of AB 131, the California Dream Act passed in its entirety, granting undocumented students access to public and private funding for college. The new Act will reported cost a minimum of 14.5 million dollars a year. That’s a state estimate so it will be at least double to triple that. Remember, undocumented = criminal.

The bill was introduced by Assemblyman Gil Cedillo (D-Los Angeles), who praised Brown for showing courage in signing it. “After having invested 12 years in the high school education of these young men and women, who are here through no fault of their own,” Cedillo said, “it’s the smartest thing for us to do to permit these students to get scholarships and be treated like every other student.”

Treated like any other student? They’re not. They, with or without the help of their parents, broke the law, which makes them criminals. For that they should be punished. Not with jail time for which we will have to pay, but with deportation.

The Times writes, “One argument in favor of the act is that it would prevent undocumented students from falling into what the editorial board sees as a “permanent underclass.” Additionally, the measure would prime these young people to replace baby boomers on the verge of retirement. But realistically, AB 131 is just the beginning.”

They continue, “So far, federal lawmakers have declined to provide a path to citizenship, and they are unlikely to produce any such bill in the near future. At least California lawmakers can offer some hope for students who want to pursue the American dream.” I think you have to be American to pursue the American dream. I always say, the first step to achieving the dream is to break the law. That shows you’re serious.

But instead of that, the California law allows, “Illegal immigrants who graduate from a state high school and demonstrate both merit and need, to apply for publicly funded scholarships and other state aid. As stated, the bill passed last month already allows these deserving students to apply for privately funded scholarships.” I am still researching the definition of “deserving”. I guess it doesn’t mean what I thought.

But, some might say, it’s their money. Why should I care how they wish to spend it. They must have excess funds to pay for the program. 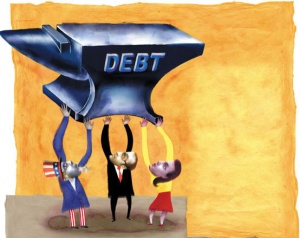 They would be wrong. As of 2008 California had more than $60 BILLION in debt and that amount is growing rapidly.
California has no law limiting the amount of public debt the state can accumulate. Adding debt approved by voters but not yet borrowed brings the total to $136 billion. That was 2008. By this year (2011) it owes $2,542 per person. That’s on top of the massive federal burden.

Cost aside, isn’t it fascinating that if a state wants to strengthen its illegal immigration laws & do the job the feds refuse to, all hell breaks loose. Federal Judges issue stays, lawsuits are filed, etc. But yet when the laws, which are quite clear, are flouted by the states, there is not a peep.

I’m a big “States Rights” advocate. Isn’t this just a states rights issue? Why can’t they do as they wish? Interesting point, but the same people who would claim that always argue that immigration is a federal responsibility. When a state wants to crack down or control their own borders, what happens? That was a rhetorical question. We all know the answer.

In our current climate of political correctness there doesn’t appear to be a solution to this mess. I, however, have a couple of suggestions.

Enact a federal law stating that there will never be a federal bailout of any state. Each state sinks or swims on its own. Once a coddled criminal alien leaves a friendly state he will be deported and any cost incurred will be paid for by that state. At least they will be more likely to stay put.

The fact is, California is already too far gone. Our job is to see to it that they don’t drag us all down with them. If states wish to flush their own money down the crapper, that’s their business, but don’t dare come crying to us when the inevitable finally happens.

We need to build a wall, not only on our southern border, but extend it around all of California.