From Madeleine Morgenstern of The Blaze:

A bookstore in Canada has sold out of an Islamic marriage guide that instructs Muslim men on how to beat their wives, according to the Toronto Sun. 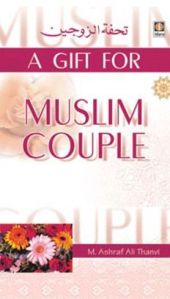 Among the advice dispensed in “A Gift for the Muslim Couple” is to “beat by hand or stick” and “pull [her] by the ears.” The husband may also withhold money to exert control, though should “refrain from beating her excessively.”

The 160-page book’s description says it “deals with the subject of marriage and after marriage relationship, as well as the various pitfalls of marriage, causes of breakdown and their causes.” It was being sold at Islamic Books and Souvenirs in Toronto. The store’s manager told the Toronto Sun it had been sold out for some time. The owner refused to comment to the newspaper.

“[I]t might be necessary to restrain her with strength or even to threaten her,” writes author Hazrat Maulana Ashraf Ali Thanvi, described as a “prolific writer on almost every

The book lists the husband’s supposed rights, which say the wife is unable to leave “his house without his permission,” and that she must “fulfill his desires” and “not allow herself to be untidy…but should beautify herself for him.”

Thanvi also writes that “the husband should treat the wife with kindness and love, even if she tends to be stupid and slow sometimes.”

Wasim Vania, president of the Islamic Society of Toronto, condemned the book, telling the

Sun it “should never have entered Canada.”

“We were the first religion to give power to women. It is sad that someone would write this. We don’t have hatred in our hearts and we don’t teach this,” Vania said.

In January, a Canadian jury convicted a Muslim husband, wife and son of murdering three teenage daughters and a co-wife in what was termed an honor killing. The trial transfixed the country and prompted a debate about assimilating immigrants.