The Tomb of the Unknown Soldier – A History

IN THE BEAUTIFUL Arlington National Cemetery in Virginia on a hillside overlooking the historic Potomac River is a Shrine that has become the mecca for not only all Americans who visit Washington but many prominent dignitaries and persons from foreign lands. It is the Tomb of America’s Unknown Soldiers, symbolizing those Americans who gave their lives in defense of the Nation’s integrity, honor and tranquility. 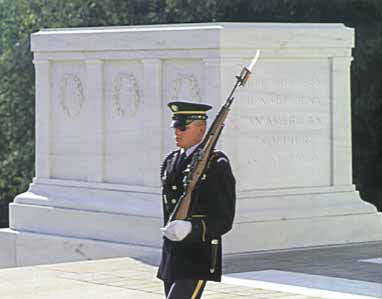 Following the custom inaugurated by other allied countries in World War I, the Congress on March 4, 1921, approved a Resolution providing for the burial in Arlington National Cemetery Memorial Amphitheater on Armistice Day 1921 of an unknown and unidentified American soldier of World War I. The Secretary of War delegated to the Quartermaster Corps the duty of selecting the Unknown Soldier and accordingly the Quartermaster General directed the Chief American Graves Registration Service in Europe to select from among the burials of America’s Unknown Dead the bodies of four who fell in the combat area in order that one from among them could be anonymously designated as the one for burial in accordance with the provisions of the Resolution.

Four bodies of Unknown Soldiers were selected, one from each of the following cemeteries Aisne-Marne, Meuse-Argonne, Somme and St. Mihiel, and brought to Chalons where they were placed in the Hotel de Ville. The fact that the bodies selected were those of Americans was determined by the location of place of death, original burial and uniforms. The utmost care was taken to see that there was no evidence of identification on the bodies selected and no indication that their identity could ever be established. 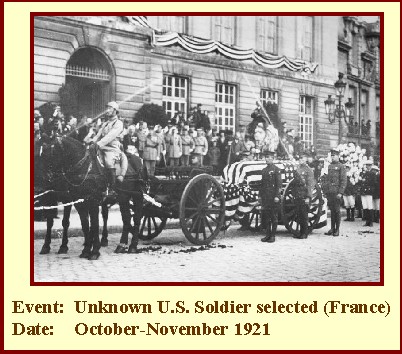 After the four bodies were arranged in the Hotel de Ville, the next step was the matter of selecting the one from among them to represent all the Unknown American Dead. This ceremony though simple was most impressive. In view of his outstanding service, Sergeant Edward Younger, on duty with the American Forces in Germany, was given the honor of making the final selection. On Monday morning, October 24, 1921, at 10 :00 A.M. in the presence of The Quartermaster General, the Commanding General of the American Forces in Germany, the Mayor of Chalons-sur-Marne, high officers of the French Army, distinguished French citizens and eminent American and French civilians the selection was made.

While a French military band played, Sergeant Younger slowly entered the room where the four caskets were placed. Passing between two lines formed by the officials he silently advanced to the caskets, circled them three times and placed a spray of white roses on the third casket from the left. He then faced the body, stood at attention, and saluted. Officers of the French Army who saluted in the name of the French people immediately followed him.

The body lay in State for several hours watched over by a guard of honor composed of French and American Soldiers while the people of Chalons reverently paid their respects and left offerings of flowers and other tributes. After brief official ceremonies by the City of Chalons the casket was placed on a flag-draped gun carriage and escorte

d by American and French troops to the railroad station where is was placed aboard the funeral car in a special train for the journey to Le Havre.

Upon arrival at Le Havre, French officials, troops and citizens of the town who had gathered that they too might pay homage to America’s Unknown Soldier met the train. Accompanied by many floral tributes and escorted by French and American troops, the solemn procession moved through the City of Le Havre to the pier where the American Cruiser “Olympia”, Admiral Dewey’s flagship at the battle of Manila Bay, awaited with her flags at half mast to receive the precious cargo which she was to bring to America. Here, with ceremonies befitting the solemn occasion, the casket was turned over to the United States Navy and placed on the flower adorned stern of the cruiser for the long journey to America. Slowly and silently the “Olympia” moved from the pier and with a salute of seventeen guns from a French destroyer, to which she promptly responded, the journey of

the Unknown Soldier to his homeland began.

On November 9, 1921, at 4 :00 P.M., the “Olympia” reached the Navy Yard at Washington, D. C., where the flag-draped casket was delivered by the Navy to the Army, represented by the Commanding General of the District of Washington, and escorted to the rotunda of the Capitol. Here upon the same catafalque (hearse) that had similarly held the remains of our Presidents, Lincoln, Garfield and McKinley, the body lay in State under a guard of honor and composed of selected men of the Army, Navy and Marine Corps.

All during the next day thousands of patriotic individuals, including the highest officials of the Government, members of the Diplomatic Corps and private citizens, passed before the casket to pay homage to The Unknown Soldier who symbolized all our Unknown and the purpose for which they died.

On the morning of November 11, 1921, Armistice Day, at 8: 30 A.M., the casket was removed from the rotunda of the Capitol and escorted to the Memorial Amphitheater in Arlington National Cemetery under a military escort, with general officers of the Army and Admirals of the Navy for pallbearers, and noncommissioned officers of the Navy and Marine Corps for body bearers.

Following the caisson bearing the flag-draped casket, walked such a concourse as had never before followed a soldier to his final resting place-The President of the United States, the Vice-President, Chief Justice and Associate Justices of the Supreme Court, members of the Diplomatic Corps, wearers of the Congressional Medal of Honor, Senators, members of Congress, the Generals of the Armies of World War I, and former Wars, and other distinguished Army, Navy and Marine Corps officers, Veterans of World War I, and former Wars, State officials and representatives of patriotic organizations.

Solemnly through streets lined with thousands gathered to pay homage to those who died on the field of battle, the procession moved on to historic

Arlington. Upon arrival at the Amphitheater the casket was borne through the south entrance to the apse where it was placed upon the catafalque. During the processional, the vast audience both within and without the Amphitheater stood uncovered. A simple but impressive funeral ceremony was conducted which included an address by the President of the United States who conferred upon the Unknown Soldier the Congressional Medal of Honor and the Distinguished Service Cross. Following this ceremony, special representatives of foreign governments associated with the United States in World War I each in turn conferred upon the Unknown the highest military decoration of their Nation.

At the conclusion of these ceremonies the remains, preceded by the clergy, the President and Mrs. Harding and others seated in the apse, were borne to the sarcophagus where a brief committal service was held. With three salvos of artillery, the sounding of taps and the National Salute, the impressive ceremonies were brought to a close.

appropriate superstructure. Accordingly, very shortly after the ceremonies on November 11, 1921, the question of selecting a suitable monument to complete the Tomb was given consideration. It was not until July 3, 1926, however, that the Congress finally authorized the completion of the Tomb and for it, the expenditure of $50,000.

The Act referred to above provided that the Secretary of War secure competitive designs according to such regulations as he may adopt to complete the Tomb of The Unknown Soldier. The Act further provided that the accepted designs should be subject to the approval of the Arlington Cemetery Commission, the American Battle Monuments Commission and the Fine Arts Commission. In accordance with the provisions of the Act, the Secretary of War prepared a program for the completion of the Tomb and invited architects of standing reputation who were citizens of the United States to submit designs. Seventy-four designs were submitted and, from among them, five were selected for further study.

The selected competitors were required to restudy their designs and prepare models of plaster of paris. When these models were received, the Jury of Award studied each one, taking into consideration the surroundings of the Tomb, the Amphitheater in which it is located and which serves as a background for it and the final effect after the completed monument was in place.

After going into the matter most carefully and thoroughly, the Jury finally recommended an anonymous design to be the winning one. When their decision had been reached a sealed envelope accompanying the design was opened and it was found that the winning design was the work of Thomas Hudson Jones, sculptor, and Lorimer Rich, Architect, of New York City.

The design selected was in the form of a sarcophagus, si 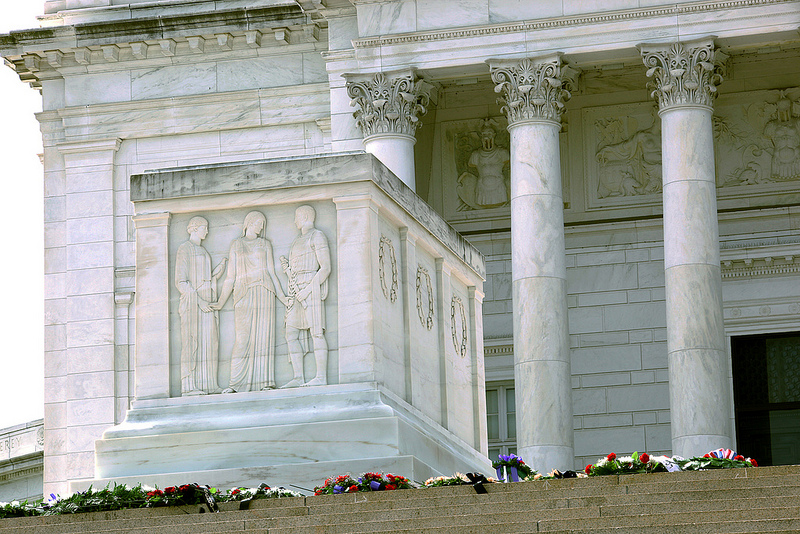 mple but impressive, and most appropriate for the purpose for which desired. The total height is 11 feet, the width is 8 feet at the base and 6 feet 8 inches at the top, and the length is 13 feet 11 inches at the base and 12 feet 7 inches at the top. The severity of the design is relieved by the Doric Pilasters in low relief at the corners and along the sides. The panel of the front, facing the City of Washington and the Potomac, has carved upon the marble a composition of three figures commemorative of the spirit of the Allies in the War. In the center of the panel stands “Victory”, with her palm branch to reward the devotion and sacrifice that went with courage to make the cause of righteousness triumphant; on one side a male figure symbolizes “Valor” and on the other stands “Peace.” Each of the sides is divided into three panels by Doric Pilasters, in each panel of which is carved an inverted wreath. On the back appears the inscription “Here Rests In Honored Glory An American Soldier Known But To God”. This is the only inscription appearing on the Tomb.

The marble is the finest and whitest of American marble–Yule, Colorado, marble, and same as used in the Lincoln Memorial. The Tomb is made of only four pieces of marble–the die, which is all in one piece and one of the largest ever quarried, weighing over 50

tons; the base; the sub-base, and the capstone.

An appropriation from Congress for the work was secured and on December 21, 1929, a contract for completion of the Tomb itself was entered into.

In order to provide an appropriate setting for the Tomb when completed certain changes were necessary in the grounds, roadways and landscaping in the immediate vicinity of the Tomb. To accomplish this, plans were prepared to provide an elaborate approach from the East and on February 28, 1929, Congress authorized the construction of the necessary approaches to the Tomb.