Air conditioning hasn’t changed much over the past century – most options are energy hungry and many are noisy and pretty unsightly.

But one company has taken inspiration from nature to create an innovative alternative that doesn’t require electricity and in theory isn’t even visible.

Using a substance called hydrogel, experts have created walls that absorb moisture to ‘sweat’ – like human skin – and cool the interior of a building. 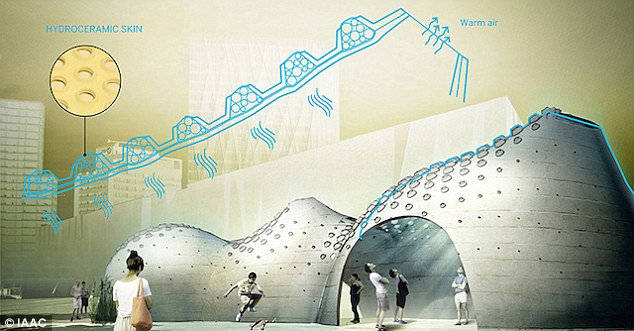 Architects in Barcelona have invented a new type of air conditioning. A substance called hydrogel that could be used in walls (shown) and can absorb water and then ‘sweat’

The technique was developed by architects from the Institute for Advanced Architecture of Catalonia in Barcelona.

Hydrogel is useful because it can swell to 500 times its size and absorb water.

When air around it heats up, this water evaporates and the air around the gel can be cooled by 5 or 6°C.

This means it has a sort of ‘embedded intelligence’ according to the team, as it will only begin cooling its surroundings when the temperature outside is hot.

‘In other words, when it is hotter outside, the interior responds by naturally decreasing its temperature,’ the team writes.

Placing bubbles of the gel between two ceramic layers allows the innovative technology to then be used in walls.

And as the hydrogels are simply little balls, the system can be moulded to fit a variety of structures.

However, it’s likely this technology would need to be used in tandem with existing air conditioning units to ensure a building reached a comfortable temperature.

According to the team this could cut power usage in a home by 28 per cent, while carbon emissions could be cut by 124.6lbs.