From Google to BMW, the race is on to develop self-driving cars that will make roads safer, but key features about how comfortable they will be inside has been lacking.

A design by seat technology firm Johnson Controls, however, suggests passengers will face each other in the car of the future and the ‘driver’s seat’ will be replaced by a comfortable control unit.

It predicts this ‘paradigm shift’ will happen in around 2035.

‘It is not something that will happen overnight, though, but rather over a period of gradual development.’

‘In the future, the role of the person in the driver’s seat will shift from that of an “active driver” to that of a “supervisor” who must be able to intervene whenever necessary.

‘The seat will become a multi-talented interior component that provides its strengths in safety, comfort, and entertainment.’ 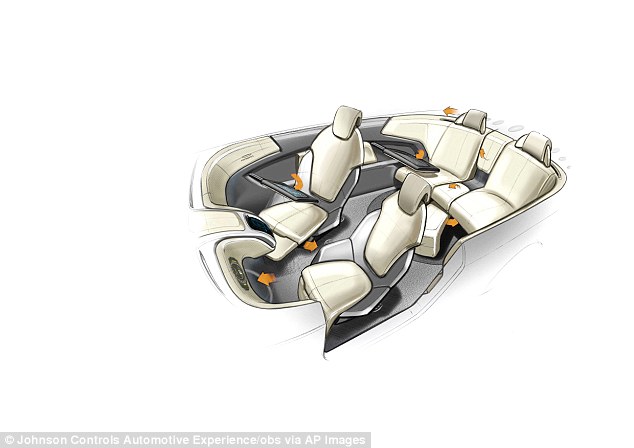 Dr Detlef Jürss, group vice president at Johnson Controls, predicts a futuristic car interior with swivelling seats (illustrated) that allow the driver to play on a tablet instead of looking at the road. However, he said this technology is still decades away from being rolled out more widely

However, he believes this vision is a still decades away, as are cars where the vehicle takes over all control functions, effectively making the driver a passenger.

The company predicted there will be ‘minimal’ change to interiors in 2025, as consumers start to buy ‘driverless cars’ which still require input from a driver.

But from 2035 onwards, it said there will be a ‘potential paradigm shift’ in interiors as drivers will only need to type in their desired destination.