He was hundreds of miles from civilization, lost in the burning heat of the desert.

Second World War Flight Sergeant Dennis Copping took what little he could from the RAF Kittyhawk he had just crash-landed, then wandered into the emptiness.

From that day in June 1942 the mystery of what happened to the dentist’s son from Southend was lost, in every sense, in the sands of time.

But 70 years later, the ghostly remains of his battered but almost perfectly preserved plane has been discovered.

Like a time capsule that could provide the key to his disappearance, it has laid intact alongside a makeshift shelter Dennis appears to have made as he waited, hopelessly, for rescue. 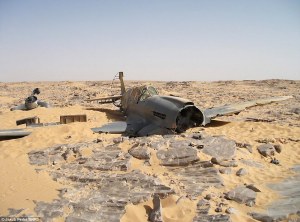 Now a search is to begin for the airman’s remains – as aviation experts and historians begin an operation to recover and display the P-40 aircraft in his memory.

The chance find was made by an oil worker exploring a remote region of the Western Desert in Egypt. It is more than 200 miles from the nearest town in a vast expanse of largely featureless terrain.

Flight Sergeant Copping, part of a fighter unit based in Egypt during the North Africa campaign against Rommel, is believed to have lost his bearings while flying the damaged Kittyhawk to another airbase for repair. All that is known is that he went off course and was never seen again.

Remarkably, the plane remained almost untouched for the next seven decades – right

down to the guns and ammunition found with it. Most of the cockpit instruments are intact, and the twisted propeller lies a few feet from the fuselage.

Crucially, the P-40’s identification plates are untouched – allowing researchers to track its provenance and service history.

There is flak damage in the fuselage, which is consistent with documents on the aircraft. Historian Andy Saunders said: ‘It is a quite incredible time capsule. It’s the aviation equivalent of Tutankhamun’s tomb. This plane has been lying in the same spot where it crashed 70 years ago. It hasn’t been hidden in the sand, it has just sat there.’

‘He must have survived the crash because one photo shows a parachute around the frame of the plane and my guess is the poor bloke used it to shelter from the sun. The radio and

batteries were out of the plane and it looks like he tried to get it working.’

‘If he died at the side of the plane his remains would have been found. Once he had crashed there, nobody was going to come and get him. It is more likely he tried to walk out of the desert but ended up walking to his death. It is too hideous to contemplate.’

The RAF Museum in Hendon, North London, has been made aware of the find and plans are already under way to recover it before anyone tries to strip it for scrap or souvenirs. Efforts have also been made to trace any immediate members of Flight Sergeant Copping’s family in the UK, but it is believed that there are none.

Captain Paul Collins, British defense attaché to Egypt, confirmed a search would be mounted for the airman’s remains but admitted it was ‘extremely unlikely’ it would be successful. The spot could be marked as a war grave after the aircraft is recovered.

Captain Collins added: ‘The scene is close to a smuggling line from Sudan and Libya.

‘We will need to go there with the Egyptian army because it is a dangerous area.’

Ian Thirsk, of the RAF Museum, confirmed staff are working with the MoD to recover the plane.

The P-40 was a US-made fighter and ground attack aircraft. It was outclassed by later German fighters and saw little combat in Europe but performed a key role in North Africa and Asia where high-altitude performance was less critical. Around 20 are still airworthy.