Cosmic jellyfish, with blobbed bodies and long tentacles made of stars, could unlock the secrets to how galaxies take their shape.

These mysterious objects are in fact spiral galaxies that are in the process of being ripped apart and remade as they move to join other galaxy clusters.

The process, which turns spirals into elliptical-shaped galaxies, has been captured by the Hubble Telescope in a number of recent images. 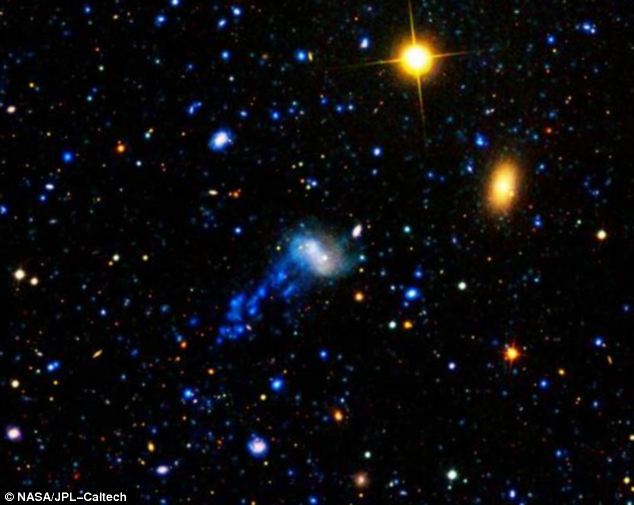 Jelly fish galaxies are created when spiral galaxies collide into galaxy clusters. Pictured here is Galaxy IC 3418 taking the form of a jellyfish as it collides with a neighbor

HOW A JELLYFISH GALAXY FORMS

The body of the galaxy settles into a round shape and cold gas in the tentacles compresses to ignite new stars.

Galaxies, such as those found in denser parts of the universe, can undergo a dramatic transformation when they collide.

The images double the number of known jellyfish galaxies and could help researchers understand why such elliptical galaxies are more common in the cosmos.

Harald Ebeling at the University of Hawaii in Honolulu believes jellyfish galaxies capture the process of galaxy collision in action.