It took the internet by storm – images claiming to show a real, working hoverboard.

Called Slide and developed by car firm Lexus, the board supposedly uses electromagnetism to levitate itself off the ground.

Ross McGouran, a professional skateboarder says riding one is ‘like floating on air’ in the latest video, which bills him as a ‘hoverboard test pilot’ – but stops short of showing him actually riding the board. 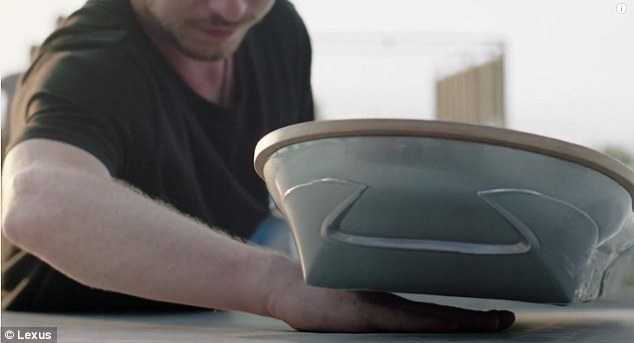 The new video stars Ross McGouran, a professional skateboarder, who says riding the Lexus Slide is ‘like floating on air’. The board supposedly uses electromagnetism to levitate itself.

‘I started skating when I was about 7 or 8, and this literally feels like i’m starting all over again,’ he says in the video.

‘This has never been done before, there’s absolutely no friction underneath you at all.

‘I forget what I’m doing, I’m, actually floating on air.’

The video then shows him walking alongside the board, and running his hand underneath it.

Slide was originally unveiled in a stylish video but, at the moment, further technical details are not available, leading some to question if it is real or not.

The hoverboard was developed by the Tokyo branch of Lexus in Japan.

It is the fourth project in their ‘Amazing in Motion’ campaign, the others being an 11ft (3.4 metres)_ tall android, a swarm of quadcopters and strobe-laden mannequins ‘dancing’ above Kuala Lumpur.

In the video a skater steps off their regular board and approaches the Slide hoverboard, which has smoke pouring out of its side.